Plans for a 1,200 seat reading room to be built on the west side of the University of Toronto's Robarts Library are beginning to take shape.

The five-storey extension, to be named Robarts Common, will span the Huron St. side of the building, adding 4,300 square metres of additional space to the crowded interior.

According to recently filed plans with the City of Toronto, Robarts Common will be connected to the main library by a four-storey bridge and include an extensive green roof. A separate plaza connecting the corner of Huron and Harbord streets is planned for the south end of the new pavilion. 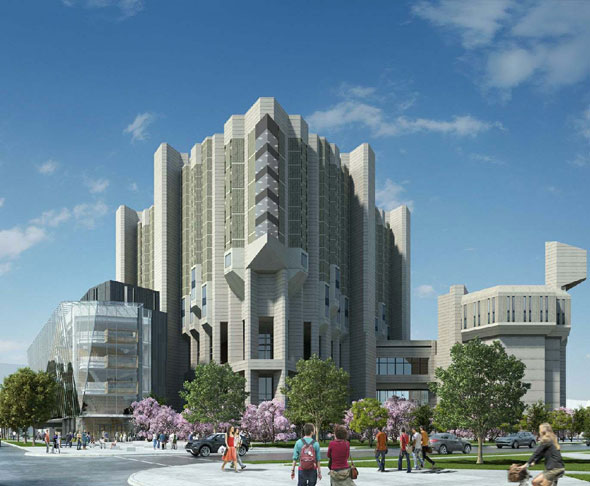 The exquisitely solid-looking library opened in 1973, its hulking stature drawing the ire of numerous observers and earning it the nickname "Fort Book."

Ron Thom, the designer of nearby Massey College, said the design of Robarts "represents everything in architecture that's arrogant and wrong. It is one of those buildings that were it not for its extreme cost should be taken down and done again in a manner more befitting its important role on the Toronto campus," he wrote.

More than 40 years later, the controversial building just as formidable looking and divisive as ever.

The design for Robarts Common, prepared by Diamond Schmitt Architects, promises to draw heavily on the library's robust exterior, copying its vertical and horizontal rectangular elements. A light glass curtain wall will wrap the exterior of the building, allowing oodles of natural afternoon light into the four floors of usable space.

The addition will add about 25 percent more study space to the building, which is used by about 18,000 students a day and routinely at capacity.

Work is due to begin next year, pending approval from the city.

What do you think of the design?