A guide to Irish Toronto

The history of the Irish in Toronto is a long and tumultuous one. The earliest European settlers to the the Toronto area were predominantly from England and Scotland, but immigration from what would become the Republic of Ireland began in earnest in 1847, or "Black '47" as it would come to be known.

That year, much of Ireland was starving as a result of a disease that destroyed large tracts of potato plants, the country's principal food crop. Faced with indifference from the rest of the United Kingdom, those that could fled the country aboard steamships bound for North America.

The vessels that carried roughly a million Irish across the Atlantic were called "coffin ships" for a reason. Hellish conditions that bred typhus, dysentery, and lice, were common. Coupled with a lack of food or water, hundreds died during the six-week crossing. Many were buried at sea or at the quarantine station on Grosse Isle in the St. Lawrence--the first port of call in Canada.

Those that made it Toronto still faced an uphill battle. In 1847, 38,560 Irish--roughly twice the existing population of the city--stepped from ships, many of them sick with deadly typhus, a disease spread by bites from infected lice. The diseas was characterized by a severe fever that, without an effective treatment, frequently resulted in death.

863 Irish immigrants died of typhus in Toronto in 1847, almost all of them in "fever sheds" set up on the grounds of the town's hospital at the corner of King and John, where the TIFF Bell Lightbox is today. Bishop Michael Power, the founder of St. Michael's Cathedral, ministered beside selfless nurses and doctors before succumbing to the disease himself on October 1, 1847.

Many of the bodies were buried in long trenches at St. Paul's graveyard in Corktown (it would have taken too long to dig individual pits.) Most were moved by their next of kin in the decades that followed but, as archaeological surveys have revealed, there are still remains under the schoolyard and highway ramps next to the St. Paul's property.

A harrowing memorial to the famine and Black '47 stands in Ireland Park near the foot of Bathurst St. 675 names of those that died are engraved in limestone as a permanent reminder of that summer.

Within five years of the 1847 migration, roughly a quarter of Toronto was Irish Catholic. As Allan Levine writes in his book Toronto: Biography of a City, the sudden rise of Catholicism resulted in a push back from the city's established Protestant population. Signs reading "No Irish Need Apply" on the outside of businesses were common.

Levine writes that "irrational fears about the power of the pope to usurp Protestantism across the world; highly exaggerated notions that all Irish Catholics were supporters of Fenianism, the early IRA-style anti-British radical militant movement based in the United States ... and the linking of Irish poverty with widely held stereotypes of Irish Catholic social ills and immorality" were also factors in the anti-Irish sentiment of the late 1800s.

George Brown, the founder of the Globe newspaper and the namesake of the modern day college, was also publicly sceptical of Catholicism. "Rome means tyranny, and has for its mission the subversion of the civil and religious liberty of the masses," he wrote in 1857. At the height of the typhus crisis, Brown's Globe suggested the newcomers would soon "sink down into the sloth to which they had been accustomed at home." Headlines in the paper called them "the curse of the land." 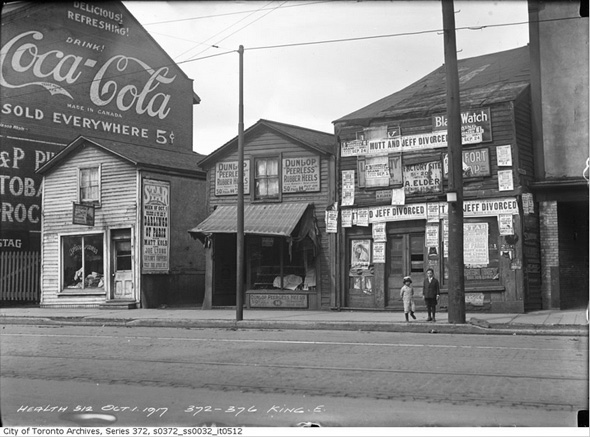 The bulk of Toronto's Irish population settled in the east end of the city, east of Parliament, west of the Don River. Conditions were often harsh and poverty widespread. Poverty, alcoholism, crime, and overcrowding were common. The Irish history of Corktown, named after County Cork in the southwest of Ireland, Cabbagetown, and Macaulay Town north of Queen, west of Yonge, is reflected in the names of many of the streets: Sackville, Trinity, Erin.

Today, the majority of Irish businesses are still located in the east end. As you might expect for a country famous for its beer, whiskey, and hospitality, food and drink is well represented.

Ceili Cottage near Queen and Greenwood, named for the Irish word for a traditional dance party, should be high on anyone's list of places to find quality Irish food, a selection of imported beers, and, of course, world classes shucked oysters. (Behind the pub, there's a school of Irish dance should you find yourself taken by the urge to jig.) 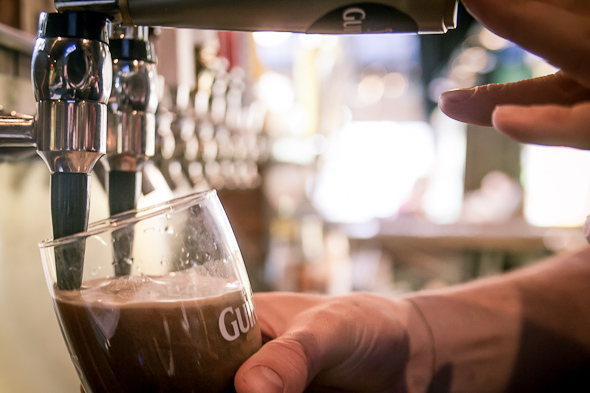 At Queen and Broadview, An Sibin, which roughly translates as "the speakeasy," is now operating out of the old home of the Real Jerk, serving up a slightly rowdier brand of Irish hospitality compared to the Ceili Cottage. The Roy at Queen and Booth is also worth a visit.

On the Danforth, the pairing of Dora Keogh and Allen's, has been drawing crowds for decades. If it's good Guinness you're after, your best bet is the Galway Arms in Etobicoke.

Irish culture in Toronto goes beyond food and drink, of course. The Irish Design House in Riverside stocks a variety of crafts and fashions from Ireland. For the homesick expat, there's a plethora of stores that stock treats and other goodies from Ireland and the United Kingdom. Now in its fifth year, the Toronto Irish Film Festival, which just wrapped last weekend, showcases the best of Irish cinema.

Be sure to check out as many of these as you can this St. Patrick's Day.