Is the TTC (still) the most expensive transit system in North America?

Back in December 2011, I asked whether or not the TTC is priciest transit system in North America. The answer at that time was "yes," at least amongst big-city, single-fare, bus-and-rail systems.

Since then, the lagging impact of the Long Recession has caught up with many US public transit systems, slamming them with large fare increases and service reductions. While generously funded compared to the TTC, many of these systems rely much more directly on sales, property and payroll tax revenue for these extra funds and their operating budgets are therefore much more sensitive to shortfalls during economic downturns. (Capital projects are another story, with billions in federal funding that Canadian cities can only drool at).

As a result of the economy, and despite solid ridership, cities such as Dallas, Chicago and Boston saw fare increases from 15% to 23% while other cities struggled with threats of massive service cuts. In other words, 2012 was not kind to many transit systems.

So where does that leave the TTC compared to its peers as we enter 2013? With its more stable economy, Toronto was spared some of the funding crises that hit US cities (Rob Ford histrionics notwithstanding), although soaring transit use is putting increasing pressure on the system. And of course the TTC did see a fare increase kick in on January 1st, pushing the monthly Metropass up to $126. How does the comparison shake out?

The short and unfortunate answer is that while the gap has narrowed some, Toronto has defended its title and remains the Most Expensive City for Transit in North America (see fine print below).

While many transit systems have raised cash and multiple-trip fares, the TTC remains in the top tier for base fares. Senior fares are much more expensive in Toronto than all other cities except Ottawa, which offers a low cost monthly senior's pass (and free Wedesdays!) to compensate. Except for a pilot program on the St. Clair streetcar, the TTC has no two-direction transfers or reduced fare zone for those who only take short trips, harsh treatment in a city teeming with downtown residents.

Most damaging, the TTC has by far the most expensive monthly pass, one that requires a stunning 48 trips to pay for itself. This equates to having to commute all 22 work days in a month, plus twice on the weekends, while never taking vacation or being sick. No other city has such a high index. Even New York, where levels of car ownership are low and a certain amount of non-work-related transit use can be expected, has a lower Trip Index (47).

Something is clearly wrong about the price of public transit in Toronto. The reasons are well known, and the problems are only likely to get worse. (See: Metrolinx, Presto, Ford, no Ford, Big Move, etc.). What will it take to bring the cost of riding the TTC more in line with the rest of the continent? Can anything be done to keep the Red Rocket from becoming the Red Ripoff? For the health of the city, let's hope so. 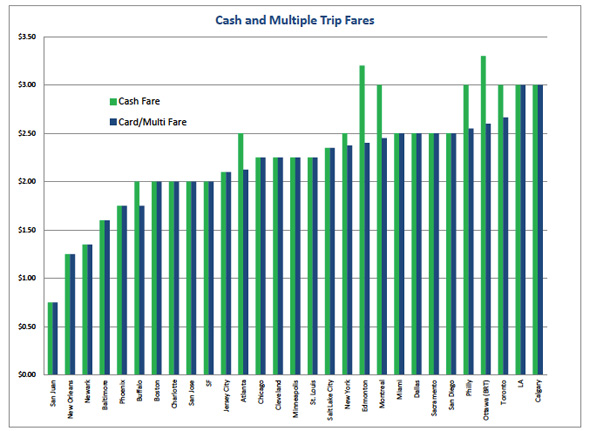 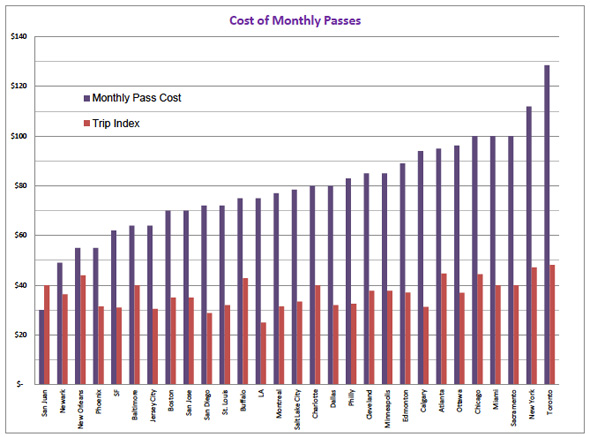 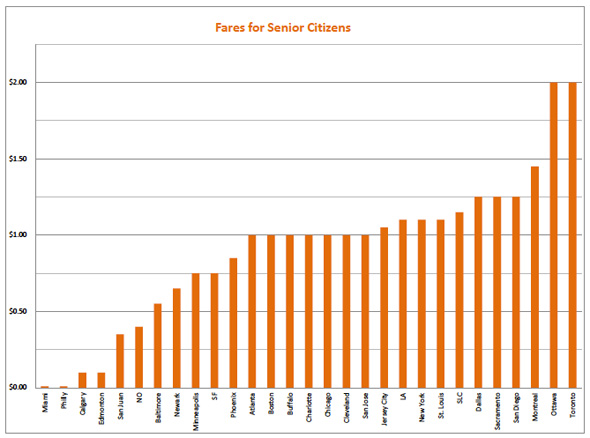 THE FINE PRINT (i.e. stop reading if you're already convinced)