The 2012 Toronto Zombie Walk is about to bring hordes of the lurching undead onto Toronto streets for its annual parade of blood, guts and all manner of gore. Started back in 2003, the event has increased in size and popularity, particularly over the last few years, with hundreds of ghoulish participants and almost as many photographers temporarily shutting down streets as they terrorize those passing by with make-up jobs that can look alarmingly realistic.

Here's some quick info to help you prepare you for a temporary rise from the dead.

It's a completely different route this year, and one that should draw even more eyes on the walking dead. The parade basically does a loop around City Hall, heading west on Queen, north on University, east on Dundas, south on Yonge, and then back west on Queen. If some of your brains have been eaten and this sounds confusing, check out the map below.

Although DIY efforts tend to be the biggest hits at the Zombie Walk, if you're looking for some inspiration or ways to make your get-up a bit spiffy, here are some useful resources.

And if you're really looking to dial up your makeup abilities, then consider Complections International Academy of Make-up Artistry 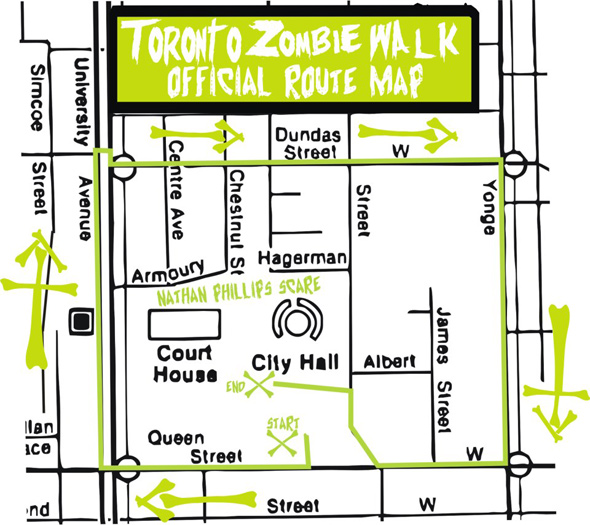