Yonge St. might get a lot more pedestrian friendly soon

Two lanes of Yonge Street between Gerrard and Richmond Streets could be closed for almost a month as part of Celebrate Yonge, a street festival co-produced by Councillor Kristyn Wong-Tam scheduled for later this summer. Under the plans heading for council, planters and other foliage will be installed in the street a few metres from the sidewalk to keep traffic to just two lanes. The closed portion side will alternate heading north.

"This is a very high-level, high-energy, urban intervention very similar to what you've seen in cities like New York on Broadway," says Councillor Wong-Tam

"It's not like people just disappear when they leave [Yonge-Dundas Square]. Yonge Street has the highest pedestrian counts in not just Toronto but all of Canada. On a really sunny and warm day you can really see how much of a struggle it is for pedestrians to grab foot real estate on Yonge Street"

The partial closure could be seen as a pilot project for further pedestrianization on Yonge, something 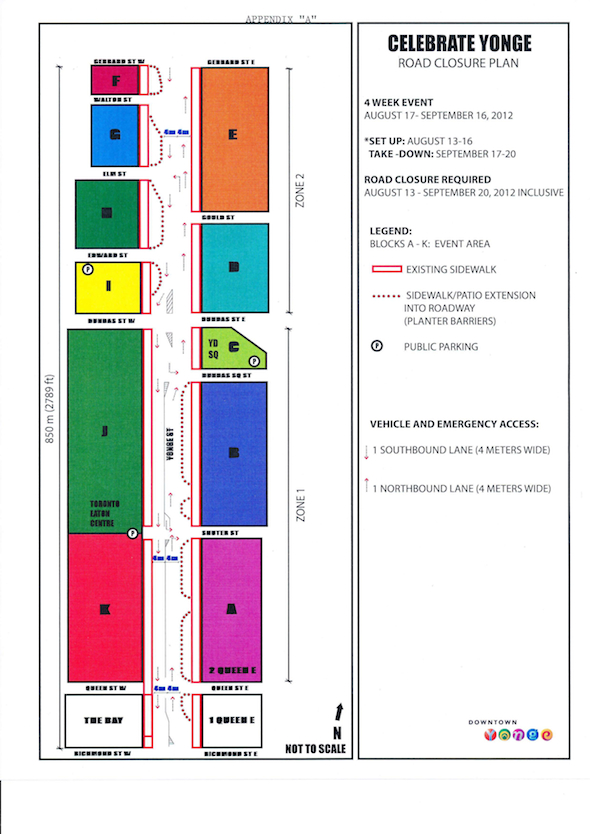 Wong-Tam and other experts have championed for years. The idea of cutting back vehicle access has been floated numerous times in the past - it even happened for a short time in the 1970s - but if results of recent surveys are anything to go by, a move like this has the potential to become permanent in future (though political opposition could prove a significant hurdle).For Celebrate Yonge, the new pedestrian zones will be five metres wide, making an eight metre walkable strip when combined with the existing sidewalk. Between August 17, 2012 and Sunday September 16, street vendors, food stands and seasonal patios for restaurants and cafes will all be out on Yonge.

At the end of the month-long celebration, the festival will wrap up with a red carpet event at Elgin Winter Garden and AMC theatres and a free concert in Yonge-Dundas Square to celebrate 30 years of Hard Rock Cafes in North America.

Above is a rough idea of how the pedestrian sections might work. What do you think? Back in the early 1970s, the entire street was closed to vehicular traffic in the summer. Is this compromise approach more prudent?

Photo: by Gadjo Sevilla in the BlogTO Flickr pool.