A sea of purple covered Adelaide Street on Sunday afternoon — shirts, balloons, facepaint — as people cheered, chanted, and yelled in support of the second annual Walk for Freedom, a march and fundraiser that aims to raise awareness about human trafficking and the sex trade. 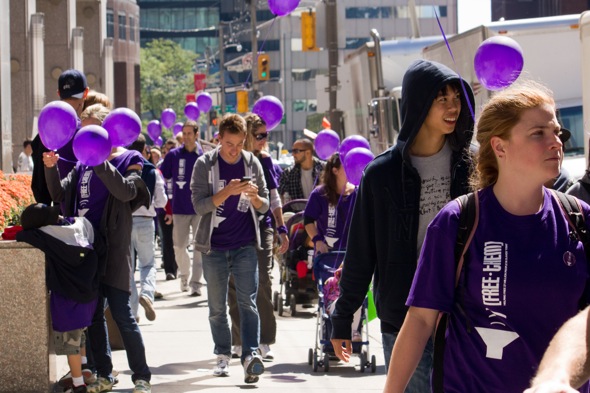 "We have a vision that human trafficking — modern day slavery — can be abolished," founder Shae Invidiata tells me, "[and] we believe strongly in raising awareness — people can't fight what they don't know exists."

And raise awareness is exactly what they did on Sunday, with an estimated 500 people offering their "voice to bring freedom, love, and justice" to Toronto's streets. In fact, the walk's start was delayed by an hour due to a higher than expected turnout — the police had not been prepared to escort so many people, and needed to call for reinforcements. 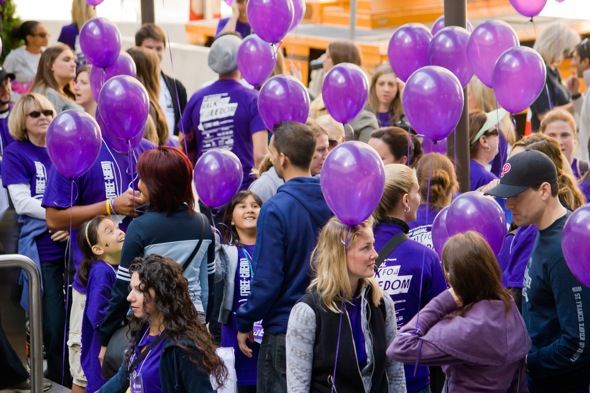 According to organizers, there are over 27 million people trapped in modern-day slavery, and 70 per cent of those people are being sexually exploited, many of whom are women and children. The average age of sex workers is a saddening 12-14 years old.

The scary reality I learned about on Sunday? The fact that human trafficking is very much happening right here in Canada, in Ontario, and in Toronto. According to RCMP statistics, a staggering 1500-2200 people are trafficked into Canada annually, although activists estimate the figure is much, much higher at around 15,000 people. 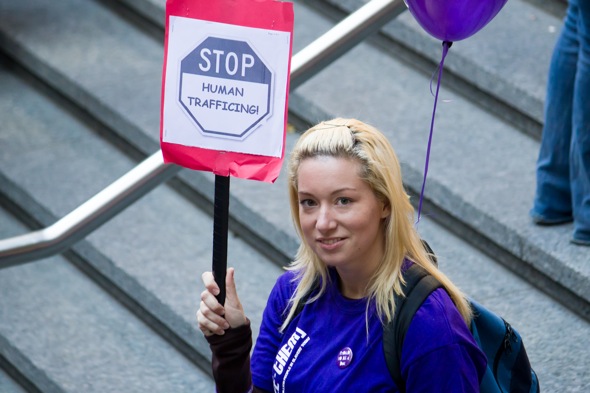 "Canada is considered both a transit and destination country," said Invidiata, "which means people — mainly women and children — are being trafficked through Canada and then down to the United States, [or that they are] trafficked into our country to meet the demand here for sexual exploitation and forced labour."

Invidiata founded [free-them] three years ago, after returning home from studying abroad in Hawaii and witnessing the darkness of the local sex industry. The walk started, unofficially, in that same year, with only 15 people participating, but in two short years, she's grown the organization into something with a much louder voice. 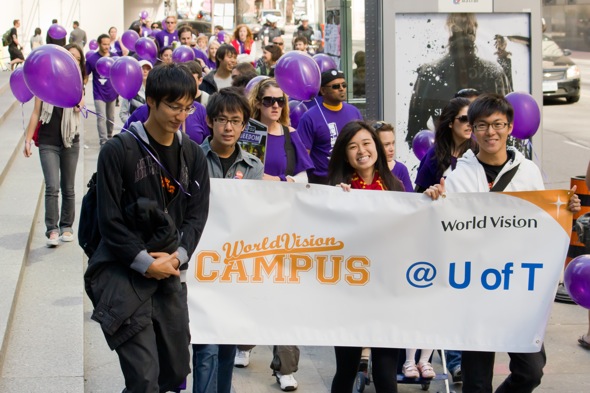 "As Canadians, there are so many things we can do to become involved and make our voices heard," notes Invidiata.

The first step, for many, was coming out to show their support in Sunday's 5km walk around the downtown core. The next step, according to organizers, is to continue to spread the word, to speak for those who cannot speak, and to raise awareness about sex trafficking and human slavery.