Google bike maps for Toronto launched in beta sometime earlier this afternoon, and I've been toying around with the route planner for the last half hour or so in an effort to evaluate its effectiveness. Unfortunately, based on this short little test, I can only give this initial version mixed reviews.

From the standpoint of route suggestions, it seems most things are in order -- not only did I agree with almost all of Google's recommendations, I was surprised by the sophistication of some of the alternatives to riding along busy streets it came up with. But despite the quality of the cyclist-safe alternatives, there is at least one glaring problem that will need to be resolved. 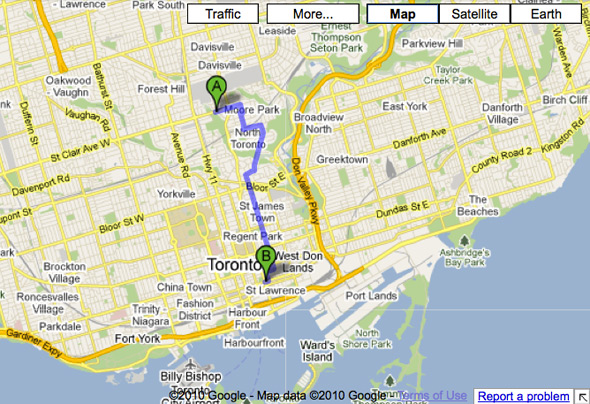 First the positives. Take the routes that it suggests for a trip from Mt. Pleasant and St. Clair down to the foot of Jarvis. Of the three options the planner delivers, the first two avoid the stretch of Mt. Pleasant between St. Clair and Bloor (where vehicular traffic often gets up to 65-70 kph) by taking the cyclist through a section of Rosedale before plopping him on Sherbourne heading southbound. The diversion is estimated to cost about 5 minutes of extra riding time versus heading straight down the hill at Mt. Pleasant (which is the third option), but there's no doubt that it's far safer.

In a perfect world, I'd like to see this safety-oriented route get the cyclist onto Jarvis a little earlier based on the horrible condition of the bike lanes on Sherbourne, but the Rosedale diversion is exemplary because it's precisely the type of route that most cyclists don't already know.

On the negative side as far as route planning goes, I wasn't so jazzed about Google's recommendation of a trip up Keele for a commute from the Christie Pits area to York University (taking Caledonia between Davenport and Lawrence would be safer), but it's possible that the hilliness of my preferred alternative makes it undesirable. So, I can't totally complain about that. 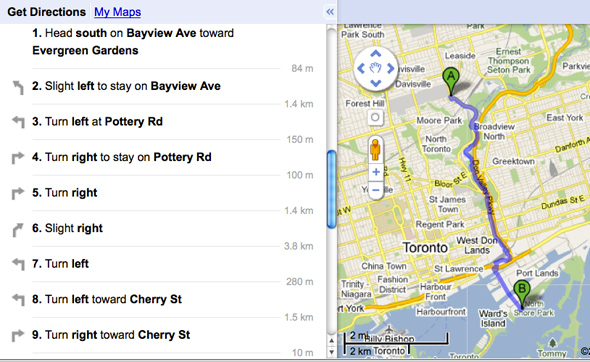 The one major problem with these maps, however, has to do with the text directions that accompany the maps. Google doesn't seem to know the names of our off-street bike paths. Take a look at the directions above to get an idea of what I'm talking about. The trail that the Google is suggesting is the Lower Don Recreational Trail, but in the absence of identification, the directions are rather confusing. I encountered the same thing when testing a trip that would use the West Toronto Railpath. The route plotted on the map took me to the trail, but the text directions made no mention of its name. Of note is the fact that path and trail identification is not a problem encountered by Ride the City, another cycling trip planner in Toronto. 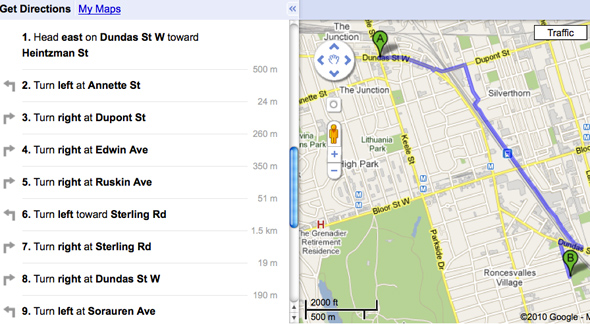 But, hey, the Google ride planner is very clearly in beta, and some problems like this are to be expected. Nevertheless, I wouldn't suggest that people looking for paths and trails use it as a resource until this is worked out.

To use the bike directions feature, simply select the "get directions" option at the Google maps homepage, type in your route, and hit the little cyclist (who should be the option furthest to the right). And please let me know if you see any other significant problems or issues in the comment thread.