Last evening's mayoral debate was alive with overdrawn rhetoric and cheap name-calling. There were even a few "shame"s thrown from the irate in the audience. A few slow claps and lots of shaking heads, but all in all, this fourth debate again just confirmed that municipal politics are best followed with a stiff drink in hand.

The first disappointment of the evening was, of course, learning that Ben (it's too easy) Mulroney would not be in attendance. His absence was remedied by a surprise front-rower, however; Mr. John Tory. (Rumour had it that Tory would be there, but of course, he wouldn't confirm the speculation.)

The first topic of discussion was the Hay Group report recommending that the Toronto mayor receive a pay raise of $16,000. As they've done before, all candidates predictably scoffed off the recommendation, with Smitherman going a step forward to chastise Council for commissioning a $50,000 study. Pantalone responded by calling Smitherman "Mr. Negative" and saying that he "hates knowledge." And no, I can't make this up.

On to the next municipal issue--immigration. Talk turned to the Tamil migrants who recently landed in British Columbia. Pantalone and Thomson emphasized the economic benefits of productive immigrant communities, Rossi talked about the need for better integration while Smitherman slammed Ford for a prior comment he made saying Toronto should be a "refugee-free zone." 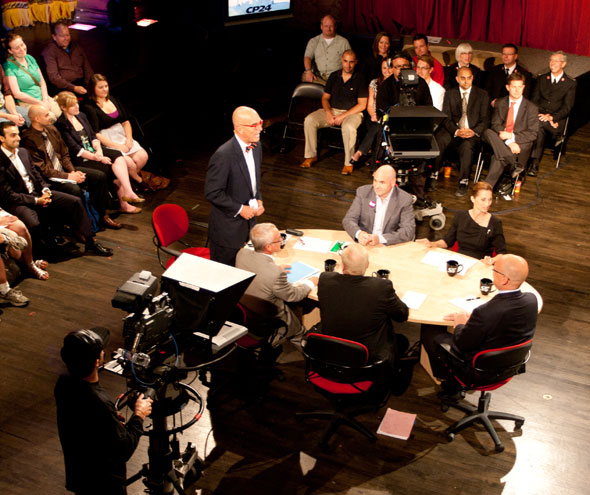 "The bottom line," Ford said last night, "is we can't take care of the 2.5 million we already have here." Pantalone piped in, asking Ford to retract his previous comment on refugees, and Rossi gently reminded Ford that Toronto's next mayor has to walk and chew gum at the same time. Smitherman said that if Canada had turned down refugees in the past, it wouldn't have absorbed the Irish community during the potato famine, or Jews during the Holocaust, which probably wasn't the best example.

After a few audience-directed questions followed by predicable answers, Tory got his chance at the mic. He challenged the candidates to set four or five specific policy goals, to which Ford announced his plan to abolish the city's Fair Wage Policy. The policy essentially requires the city to pay contract workers the same amount as permanent employees. Ford called it the "unfair wage policy," and I wondered how much he pays his speech writer.

The announcement incited some audience members to yell "Shame!," while distracting moderator Stephen LeDrew from the fact that Thomson and Pantalone didn't get a chance to respond to Tory's challenge. *Sigh* Always a bridesmaid...

On to the TTC, which Rossi thinks should be privatized, though Thomson doesn't think it will get any bites. Smitherman said he believes parts of the TTC should be privatized calling the state of cleanliness on the TTC "a disgrace." Ford wants to keep the TTC public, and expressed his support for TTC workers.

Rounding up the evening:

So what did we learn from the evening? Well, Ben Mulroney had twins. But like most other things discussed last night, that was already old news. 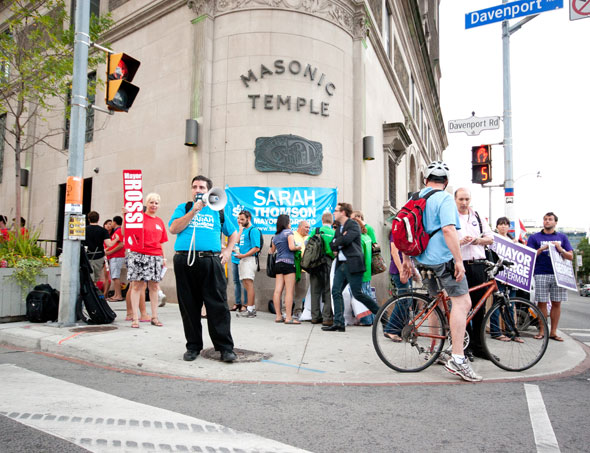