As reported in today's Morning Brew, TTC employees fed up with being repeatedly shamed in the media have decided to battle back, and may even initiate a work-to-rule campaign. The creation of a members-only Facebook page has served as the occasion for employees to turn the tables by sharing photos of transit riders behaving badly, including those depicting feet on seats, graffiti and subway cars strewn with trash.

Apparently the irony of such a response is lost on our friendly TTC workers.

As frustrating as it must be to be vilified in public -- particularly for those who do their jobs well -- calling out riders for their misdeeds is childish and misguided. Last time I checked, passengers weren't being remunerated for their travels on public transit.

While there's little doubt that some people are slobs, a Facebook page that highlights this fact is yet another in a series of public relations missteps. 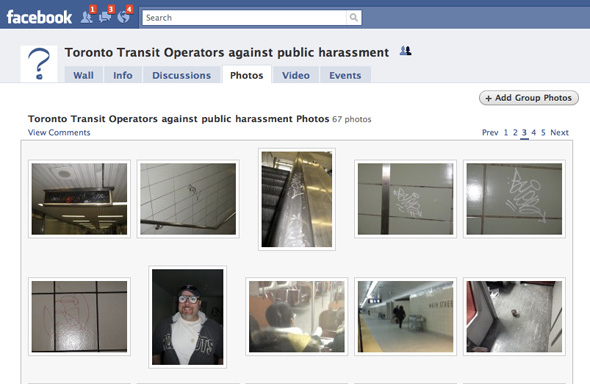 It's likely that this particular employee reaction is a direct response to the stern statement TTC General Manager Gary Webster delivered on Saturday. Citing their role in "allowing the TTC to drift into a culture of unacceptable operating discipline," Webster's memo was certainly an embarrassing public admonishment.

But, given the events of the last month, it's not surprising that the GM has taken to the offensive in trying to restore the reputation of his management system.

More worrisome than employee complaints about riders are the rumblings of a work-to-rule campaign. As reported in the Globe this morning, a member of the Facebook page posted a "Reminder to work to rule on Monday. Check out ATU site."

No confirmation can be found on the (Amalgamated Transit Union) site, but certain areas can only be accessed by employees.

Bob Kinnear and the rest of the union brass are keeping their lips sealed for now, which is probably a good thing. Kinnear's comments about the sleeping fare collector a couple of weeks ago were anything but well received.

While it remains to be seen what effect a Facebook page that now has 307 members will ultimately have, February 17 looms as an important date, as the TTC will report on the start of its recently implemented customer service initiatives at that time.

What do you think? Is it only normal that TTC employees would want to vent? Does the fact that the group is members-only help to save another PR disaster? Has anybody joined? What do you think of the photos?

The Star is reporting that Bob Kinnear has broken the silence by confirming that the call for a work-to-rule campaign did not come from the union, and that no evidence of such action could be found through this morning's commute.

He also spoke to the frustration of TTC employees.

"We've got 13 and 14-year-olds that feel that they have an entitlement to film our operators in the performance of their duties, and that's not acceptable," Kinnear complained.

I understand that most are uncomfortable being filmed while working, but what's with trash talking the kids? The reason they would feel entitled to film TTC operators -- if indeed they do -- is that pretty much everything is filmed nowadays, including the customers who use the TTC.

And, if my logic is sound, had the operators been "performing their duties," there wouldn't be this frenzy of attention on TTC employees.

Photo by End User, member of the blogTO Flickr pool.