Is Zanta back in Toronto?

Could Zanta be back in Toronto?

The window of the Starbucks at Yonge and Wellesley was marked with "GOOGLE SEARCH ZANTA" from the outside (and backwards, so it reads from the inside of the store).

Known for his self-promotion almost as much as his street antics, and also known to use internet cafes, it wouldn't surprise me if Zanta was indeed back in town. Can I get a "Yes! Yes! Yes!" from anyone? 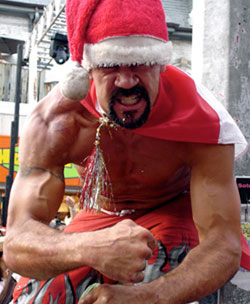 The buff street character, also known as David Zancai has been known to roam up and down Yonge as well as along Yorkville.

Although since being banned from most of Toronto and reportedly moving to Brampton, we haven't heard his trademark "Yes! Yes! Yes!" or seen his bare-knuckle sidewalk push-ups in quite some time. Love him or loathe him, Zanta's part of our city.

He's to Toronto what The Naked Cowboy is to New York City. Call him crazy or call him a menace, he's one memorable man. Personally, I'd welcome him back to Toronto. This city needs more mischievous frivolity that Zanta brings.

Is Toronto better off with or without Zanta?

Is Toronto ready to have Zanta back?

When and where was your last Zanta sighting?