Sitting silently just east of Toronto's Pearson airport is the derelict Regal Constellation Hotel. Built in 1962, this somewhat bizarre example of modernist architecture was geared toward conferences and trade shows, but due to corporate rearrangement, SARS, and a host of other unfortunate events, it has sat vacant for the past few years. This past weekend, I found myself at an international conference across the street (one that, ironically, used to be held at the Regal), and I could not help paying a visit to my old friend. 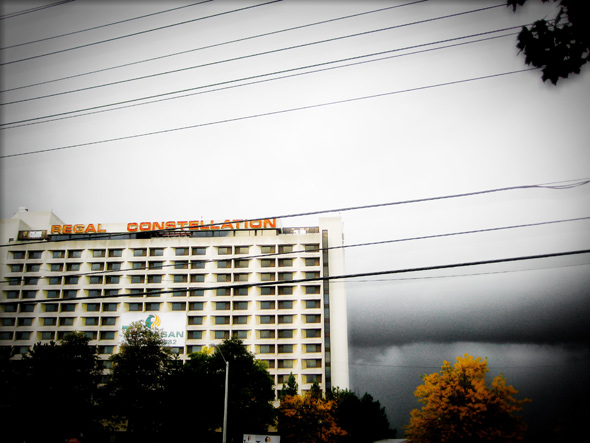 What strikes one first about this building, even in its current state of demise, is how seemingly haphazard the overall design is; it consists primarily of two 15-story hotel towers connected by a massive conference centre. The windows on the former have an odd trapezoidal-shape, and added to the strange Vegas-style neon roof signs (off for several years now), give an odd sense of retro-futurism.

I recall watching planes land in their steady, connect-the-dot stream from these windows a decade ago, and I wonder how this place will be fated. Since its guests made their final exit, the rear parking arcade has been demolished, and every day since, huge machines have been busily working at the rear of the site, and yet it seems to be an un-consuming fire. 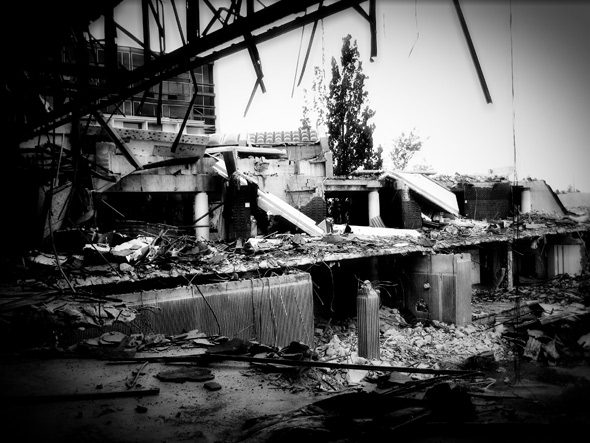 When I initially heard of the site's closure some years ago, I was excited to go and visit a place which I used to frequent in its own skin (the same urge which drove me initially to return to the Guild Inn, whose conference centre I also attended when in use). Upon my most recent trip (albeit, across the street this time), I was shocked to find that although a number of years had passed, absolutely nothing has changed. The demolition machines seemed to be merely fulfilling an ancient Greek myth, eternally emptying a bucket which began with a hole. It seems to me that they are merely re-arranging the rubble they created two years back, waiting for orders from head office. 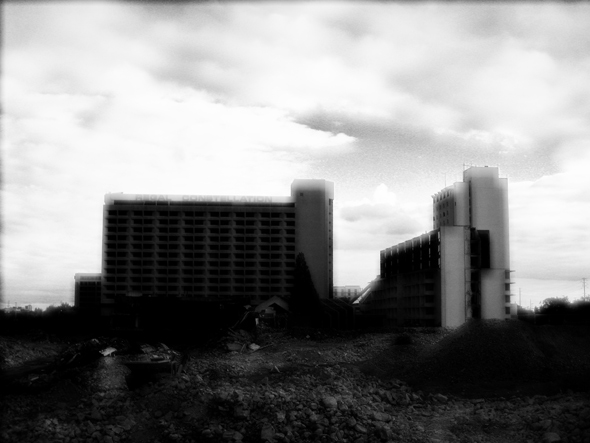 Plans to incorporate the current hotel towers into a new complex on site seem to be inching forward slowly, at best. The end result is not what I am interested in, however; it is in this current interim state that I enjoy most. The vision of a pitch-black hotel at night through my window across the street, red warning beacons on the roof flashing to warn incoming planes of its mighty presence (its only light), the slight smell of mold and debris as the wind rises, and the massive piles of twisted metal in back; this image suggests, warns, and reminds me that all things are merely in a state of transition and not permanent, and that, in the end, all things go.

Here's a slide show of some of the snaps I took at this silent hotel: