What it's like to tour Toronto on a sightseeing bus

When the big red double decker bus pulls up to the curb, painted with big yellow "City Sightseeing" lettering, I can't help but question what it is I'm doing.

After over a decade in this city, I feel pretty comfortable getting around. In that time I've lived on Queen West, Little Portugal, the Danforth, and in Bloordale. I've worked everywhere from Bay Street to Downsview and I've bicycled from the Etobicoke to Scarborough. But despite, or perhaps because of that familiarity, it's easy to let the form of the city fade into a list of tasks, deadlines and impending social engagements. 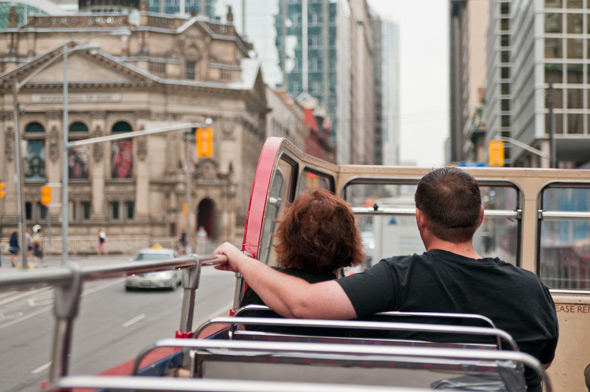 I know in my head that it's so much more than that, but it's so easy to get stuck in the kind of rut where you realize you don't remember the last time you even looked up. That's one of the greatest perks of being a tourist — you spend a lot of time looking up.

I was in New York City back in June and I swear I had my neck craned back so much I'm surprised I didn't get hit by a car. There's a Zen-like element to relinquishing all sense of duty for a great view. It's something that's easy to do when in foreign lands, but something equally as rewarding at home, but it often requires a little nudging. 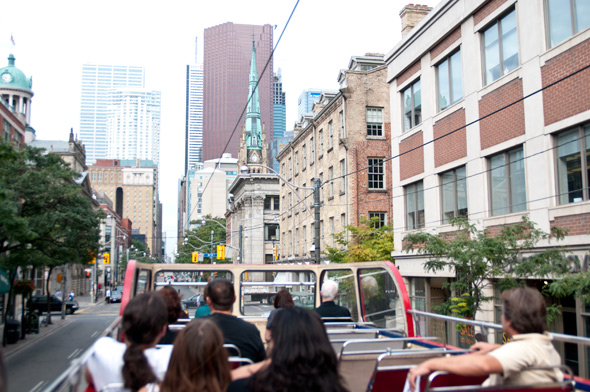 That's where this tour bus comes in — it's tasked with the responsibility of offering new perspective, at least for a local who hops on for a tour of his own city. It feels a little phoney getting on one of these things after such an extended stay, but perhaps sometimes you need to fake it, as they say, to make it.

And what constitutes making it? Total Toronto Tourism Enlightenment. I want calm and a new perspective; I want to learn something new and maybe get a few nice pictures along the way. 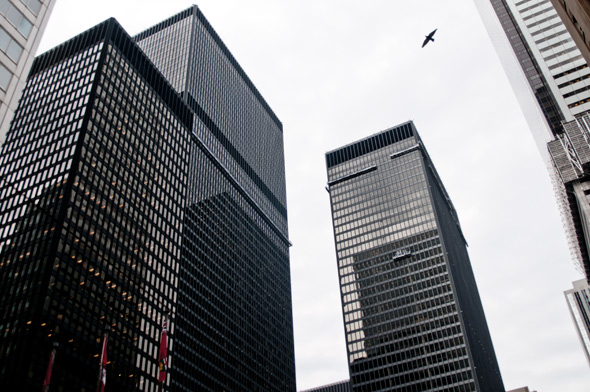 Unfortunately, in this town enlightenment costs $35, but it lasts a whole week and includes a free boat tour, so you know, it might just be a bargain.

I hop on the bright red City Sightseeing double decker bus just down the street from the Harbourfront Centre at stop number three. There are 25 stops along the route for passengers to hop on or off as they see fit. The route may be short from a local's perspective, focusing strictly on the downtown core — it stretches as far north as Casa Loma, East to The Distillery District and West to Spadina — but actually has a larger footprint than BIXI (frowny face, BIXI). 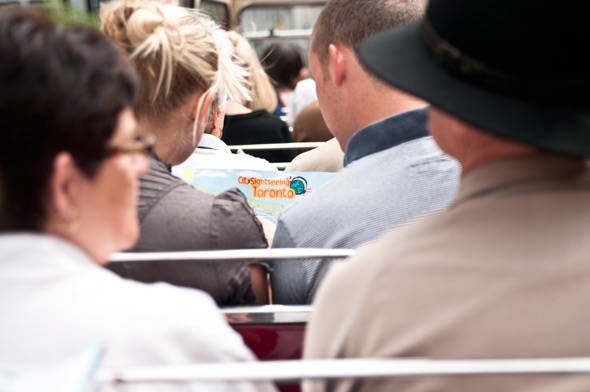 Once on the bus, I quickly snagged myself a seat up top. Since it's midweek, and early, there were plenty of spots to choose from, but during peak hours it's not uncommon to get forced down below.

The tour begins with a little boasting about skyscrapers, particularly the bling heavy Royal Bank Tower (there be 24 karats in those windows!) and the startling admission that had we taken this tour 13,000 years ago, we'd all be under 100 metres of water right now. It seems Lake Ontario (the smallest and coldest of the Great Lakes) is but a puddle compared to the glory of the ancient Lake Iroquois that stretched all the way up to Davenport Road. 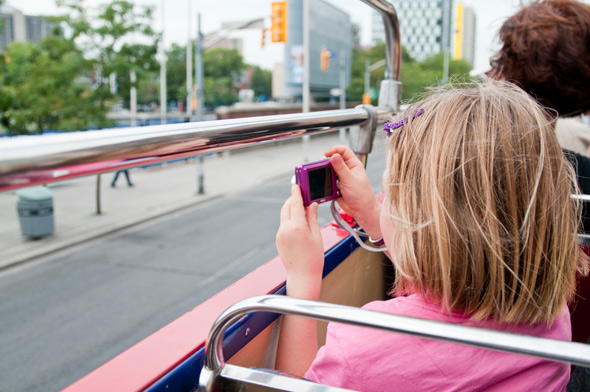 Next we zoom over to the Distillery District, our tour guide giving us the gist of the area (a former distillery [duh!], now pedestrian mall with no big box stores or chains). I don't know how much of his spiel is scripted and how much is improvised, but he's good. He speaks comfortably and confidently and manages to inflect his narrative with just enough humour to keep things light and entertaining. 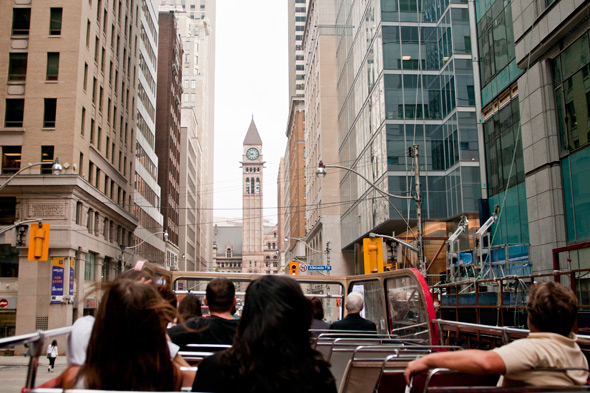 Next it's north, up Yonge Street, through Yorkville and towards Casa Loma. Once into Yorkville we learn about the $50 cup of coffee at Pusateri's, the crazy expensive condos going up at the Four Season's Private Residences ($28 million for the penthouse!), and are treated to a little celeb-bragging, a bad habit in Toronto that reeks of civic insecurity.

At Casa Loma we learn of the heartbreaking story of Sir Henry Mill Pellatt, a man who at one time controlled all the electricity in the city, but was ruined in part by the City of Toronto who seized first his business, taking control of the electricity in Toronto in exchange for nothing, and then his castle for a paltry $27,000 in back taxes he owed after he had been robbed of his business. He ultimately died penniless, living above his former chauffeurs garage. 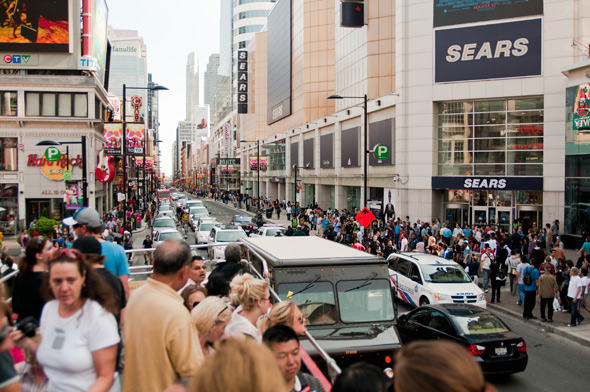 From here it's back downtown, past the ROM and the Bata Shoe Museum, through Chinatown and the Entertainment District, where we learn more of fabulous celebrities and the Toronto Film Festival.

To be honest, the two hours fly by. A lot of what is covered is rudimentary Toronto history, and most of it will probably sound familiar. But it's still nice to hear, and there's sure to be pieces of new information to be picked out. The biggest discovery for me came at the University of Toronto. Apparently Robarts Library was not, in fact, designed to look like an evil fortress or futuristic space-prison, but a peacock — the bird of wisdom. 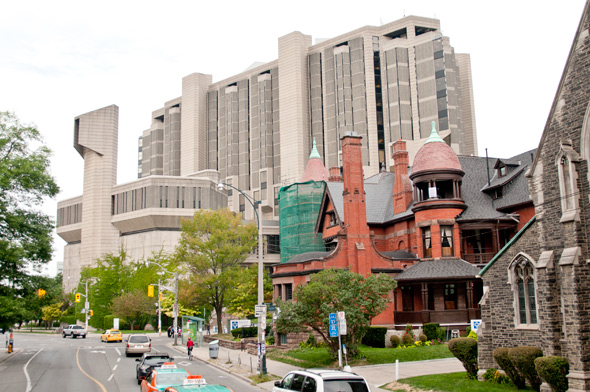 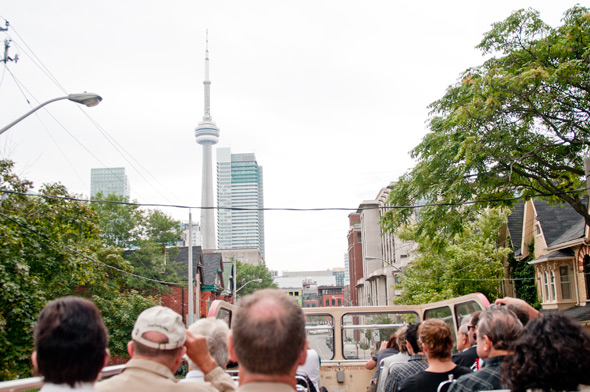 The whole ordeal has a bit of a meditative quality. It's amazing to sit down and focus on the things around you, not on a destination, but on the places you see every day, but rarely pay much attention to. And being elevated just that little bit leads to discoveries of things you won't believe you never noticed before, like the remnants of Toronto's first fire station perched above a sushi restaurant on Yonge Street. 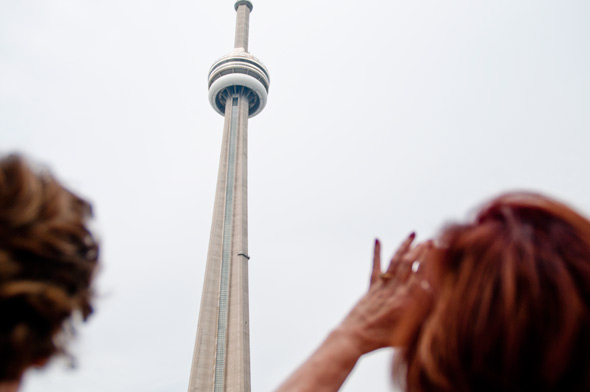 After the tour is complete you're encouraged to take a free boat tour along the harbour. This has an even greater meditative quality. As the boat cruises through the inner islands, the guide stays silent — the view speaks for itself. 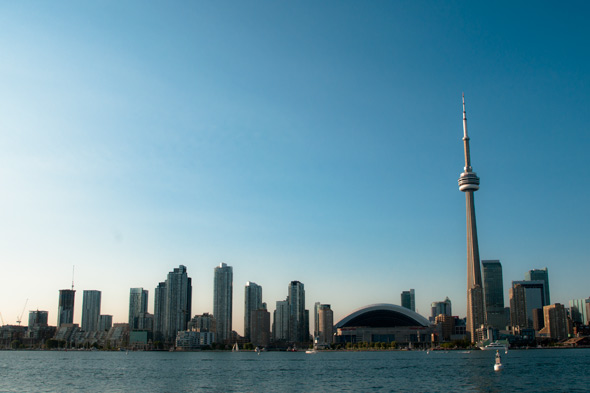