MakeWorks is a co-working office, a maker space, a startup incubator, and an events venue all in one. As founder Mike Stern puts it, the 10,000-square-foot space at College and Dufferin is a "shared R&D lab" for new startups and businesses of all kinds.

"We have a focus, which is startups doing non-traditional startup things," Stern says. "Instead of just software developers crowded around, we have this bigger facility where people are doing more physical things." The space allows digital and physical technology and innovations to collide; in addition to providing office space for startups, they also offer facilities for 3D printing, electronics work, laser-cutting, metalsmithing, ceramics, woodworking, and more. 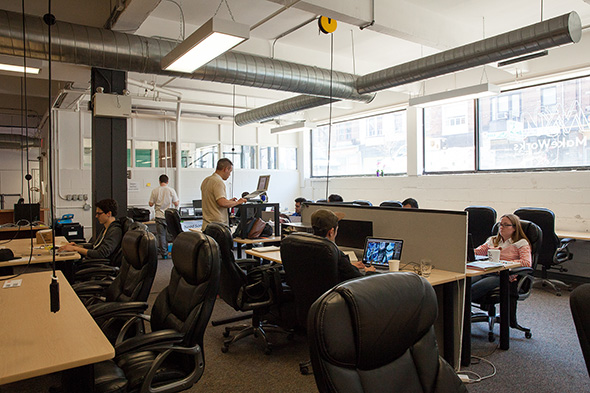 Necessity was, as usual, the mother of invention: Stern wanted to start a company that created both software and hardware, but couldn't find a co-working space that fit his needs. "Then I found this space" - a converted shoe factory - "and I found a few other companies, and they were already aligned in needing that kind of space. So, we just built it." 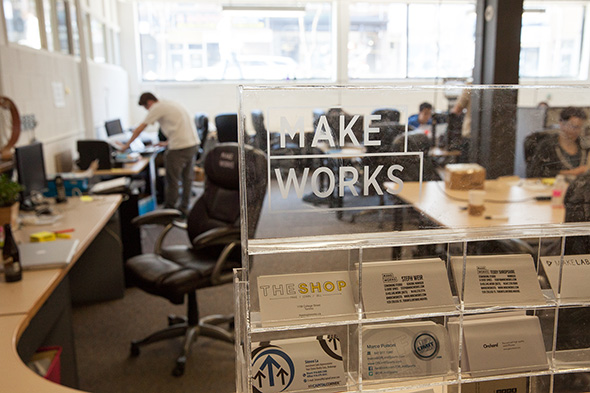 The front of the building is a co-working area, offered out on a month-to-month basis, that's fully outfitted with desks, WiFi, and some comfy leather office chairs. There are no cubicles, but that adds to the climate of cross-pollination between diverse startups and businesses.

"By just being physically close to one another, you end up getting a lot of serendipitous moments," Stern says. (For example, a 3D scanning outfit and a real estate firm have been talking about creating virtual 3D walkthroughs of available properties.) 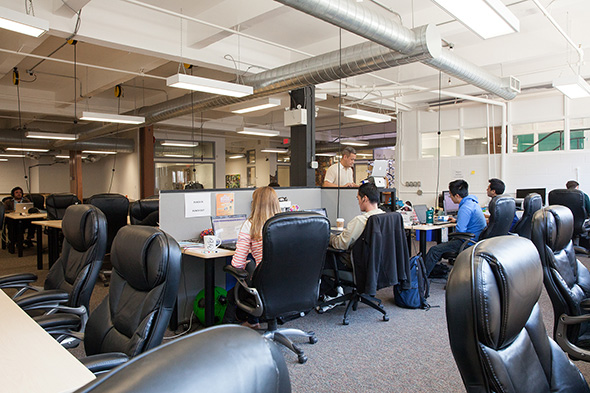 Current tenants include Sensimat, who created a mat that helps wheelchair users track and vary seat pressure; Pawly, an app that lets pet owners interact with their dogs while away from home; and Sprout Guerrilla, who produce artwork and coasters coated in live, growing moss. Indiegogo Canada also recently moved into the space, which has been a boon for their tenants: "They're a tap on the shoulder away if you need help with your campaign," Stern says. 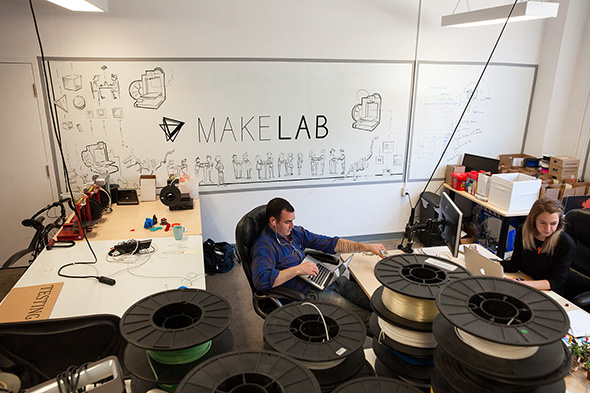 Across the way is the MakeLab, the space's electronics and prototyping lab, which includes an array of 3D printers (available for rental), a laser cutter, and some electronics equipment acquired when RIM was downsizing. It's open to all members to use, and workshops and training are part of the space's programming. (Other knick-knacks lying around the lab: A fully-articulated 3D-printed scorpion toy, a doorbell that looks like HAL 9000, and a vending machine retrofitted to stock tools and materials for the electronics lab.) 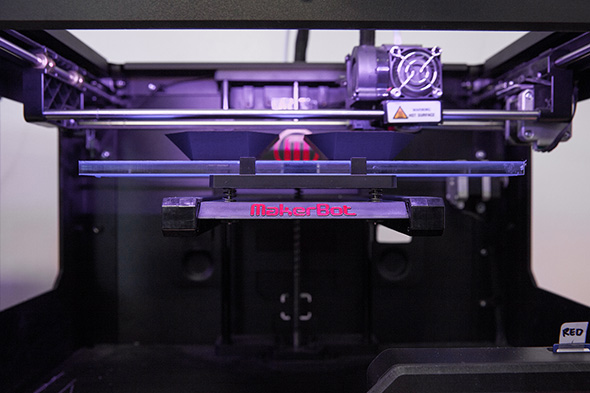 "There's really cool integration with people who have no hardware side of their business," adds Teddy Shropshire, the space's manager. For example, Orchard, a startup that facilitates buying and selling used phones, recently began making laser-cut cases, just because they have access to the lab. "It's not really part of their business plan - it's just something that, because they have access to these tools, it gives them something a little more personal about their product." 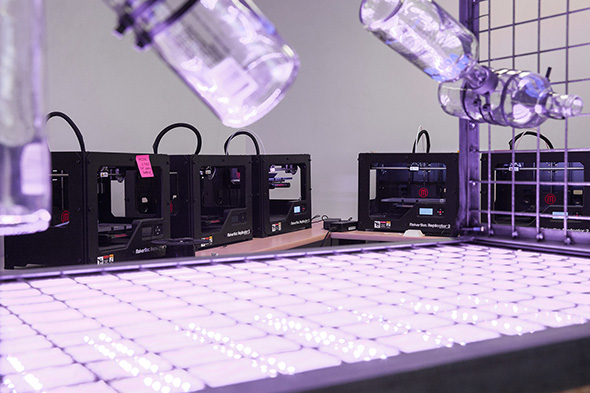 If you're not looking to launch a startup anytime soon, but still want to learn how to 3D print, don't worry - MakeWorks just began offering public workshops, and they've launched a crowdfunding campaign of their own to get those workshops off the ground.

"People can come and take a 3D printing workshop, or a laser cutting workshop, or arduino-building, or drone-building," Stern says. "There's such a brain trust here, and we basically use the people that are in here and say 'Do you want to do a workshop on something?'" 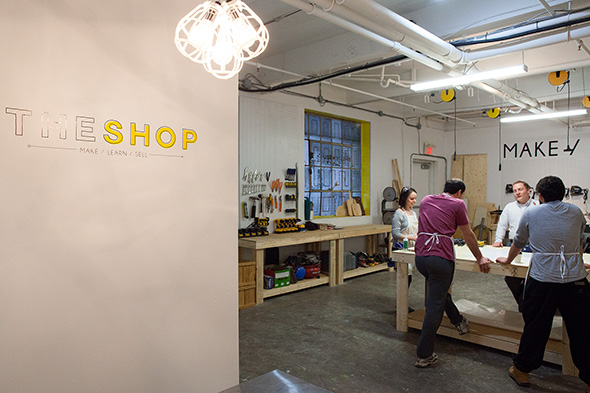 That brain trust includes The Shop, a maker space located at the back of the MakeWorks complex, where members and visitors can get hands-on with woodworking, ceramics, and metal (read more about them here). Workshops have been a big draw to the space; when I arrive, the room is set up for weaving class. 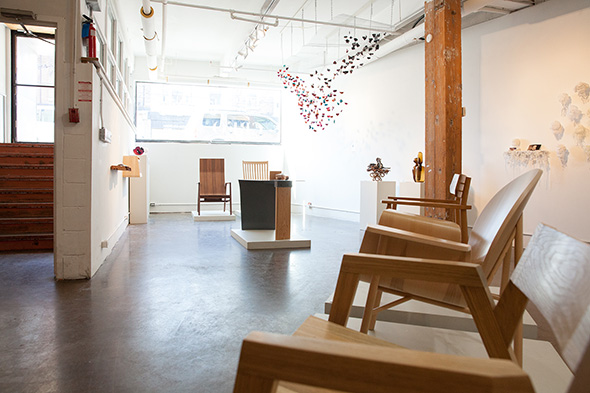 There's also a wide-open space used for events and as a gallery - though, given the demand for room at MakeWorks, it may not be kept open forever. Just a few short months after opening, however, they've already seen some turnover; a few companies have already "graduated" out of the office, including Brainsights and SHOEme.ca. 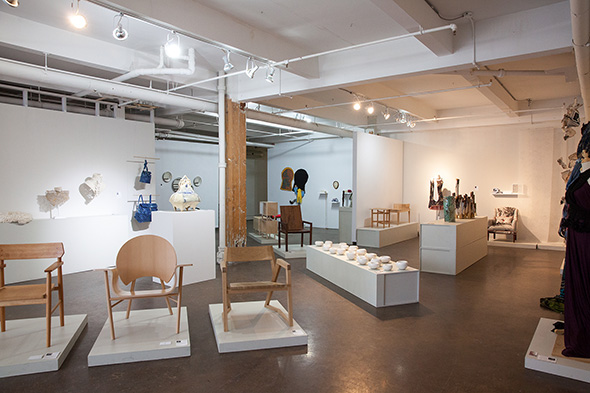 "Traditional co-working spaces would, like, want to just keep their same membership forever," Stern says. "The more people that graduate, the more people will be like 'Oh, that company started at MakeWorks, so we want to start at MakeWorks'. It's a self-fulfilling thing." 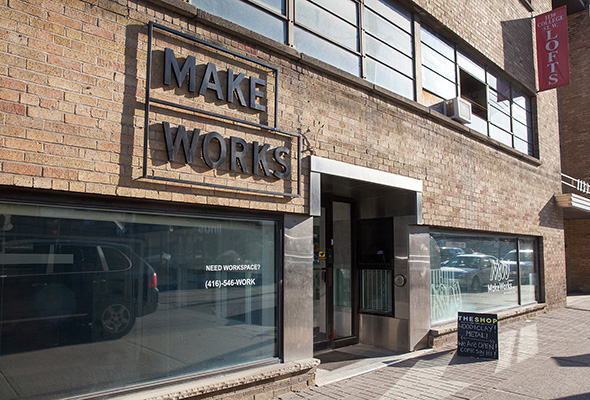