That time the Toronto Blue Jays almost moved to Mississauga

In some alternate universe, the Toronto Blue Jays are happily home after a long stint abroad, playing comfortably back at their retractable-domed stadium in... Mississauga?

Had things gone a different way, our beloved SkyDome (or Rogers Centre, whatever) may have never been. Instead, the Jays could have been playing at a colossal facility at Hurontario and the 401, known during planning as the Trillium Dome.

Before the Toronto Blue Jays found their cutting-edge new home with the construction of the world’s first (operational) retractable-domed ballpark, several sites were considered to replace the windswept hodgepodge that was Exhibition Stadium.

Exhibition Stadium was never intended to be a permanent solution for the Jays, and was also not an ideal home for former tenant, the CFL’s Toronto Argonauts. Sightlines were terrible for baseball, and issues like extreme weather and swarms of seagulls made life miserable for all attending.

The infamously weather-plagued 1982 Grey Cup proved to be the final nail in Exhibition Stadium’s coffin, contributing to growing political and public will to build an enclosed stadium.

The following year plans were thrust into gear to bring a modern sports facility to the region. Then-Premier Bill Davis soon kicked off a design competition, seeking proposals for multi-purpose stadium sites in the Greater Toronto Area.

Bids came in from across the region, most submissions tabled for locations outside of downtown Toronto, and some outside of the city entirely. Among these, a bid from then-Mississauga Mayor Hazel McCallion that would have seen the Jays and Argos play their home games in the 905. 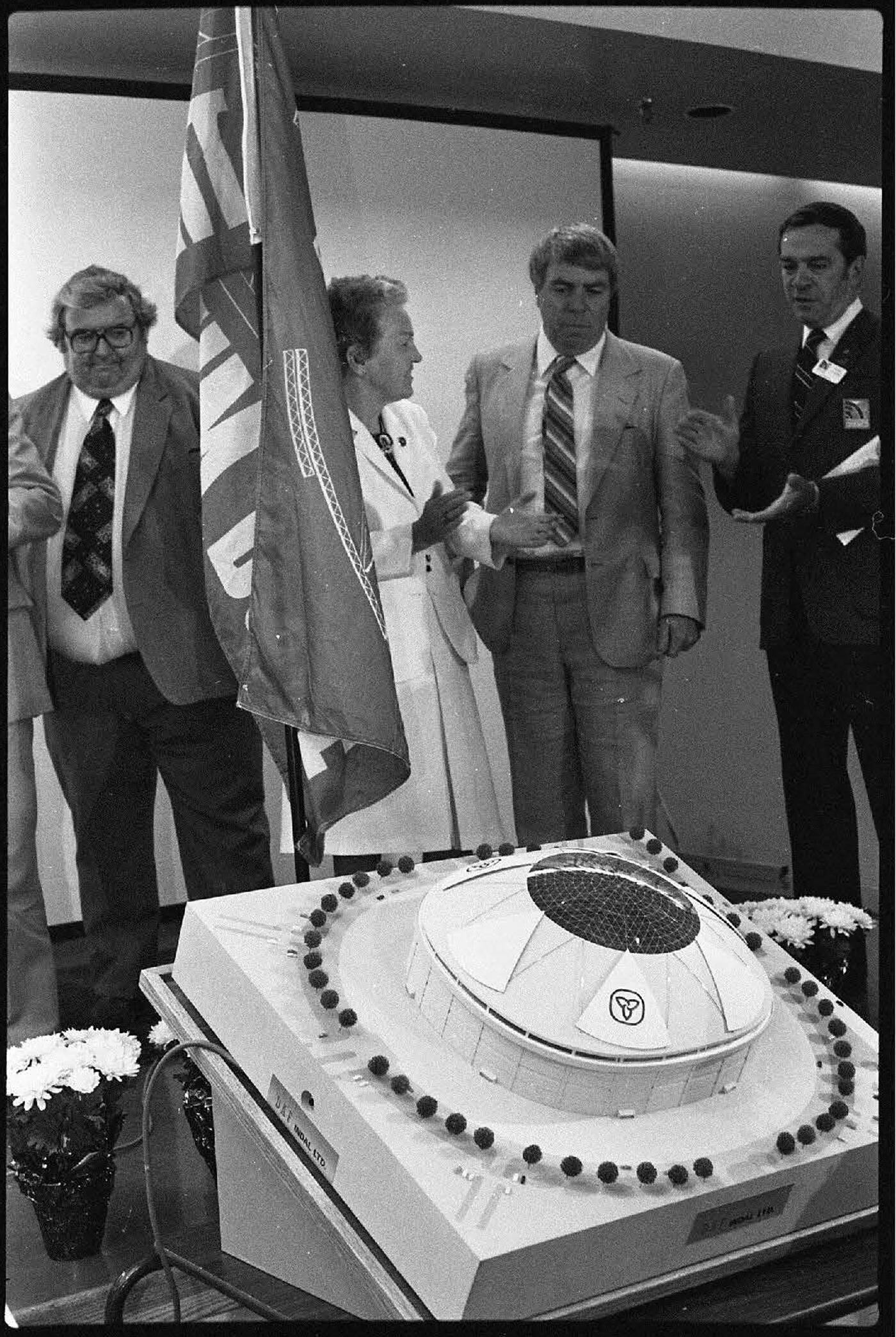 Homebuilder and philanthropist Harold Shipp was signed on to lead the charge for what would have been a 3,000-acre mega-complex with concentric rings of parking and a mix of commercial and residential development surrounding a 65,000-seat stadium at its centre. 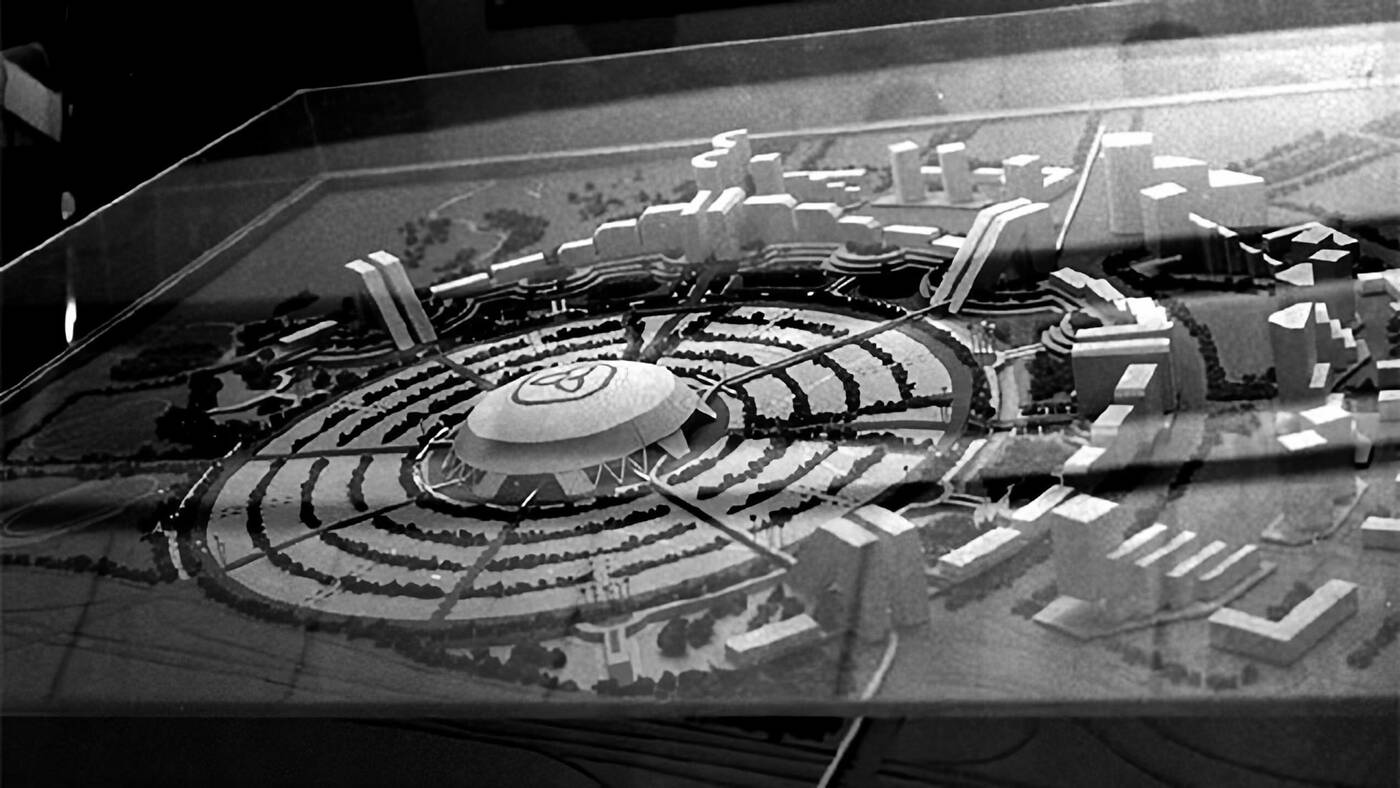 The Trillium Dome bid would have created a small city around the new arena. Image from Brampton Times fonds via PAMA.

The Trillium Dome would have featured a retractable roof, though with a much different design than the now-iconic sliding and rotating panel roof of the current stadium.

The dome's roof design was courtesy of Mississauga-based DAF Indal, and was a feature named “Stardome” in a nod to its distinctive star-shaped geometry when open to the sky. The “Stardome” design is largely forgotten, but of course, a familiar-sounding name would eventually live on in Toronto sports lore.

The Mississauga bid offered a solid financial incentive over competing Toronto sites. Its proposed mix of residential, commercial, hotel, and recreational spaces was touted as a solution to the public taxpayer funding debacles associated with such massive undertakings.

Shipp thought he could build the whole thing with private funding. He may have been right, but we’ll never know for sure.

Even with all its advantages — low costs, highway access and plans to connect a light rail line to the site — the Mississauga bid was passed over in favour of plans to construct a stadium in Toronto’s Downsview area.

The Canadian National Railway’s entry into the mix in 1984 pitched a bid for a stadium on surplus land next to the CN Tower. It was an opportunity too good to pass on. Downsview’s stadium plans were scrapped and the SkyDome was born.

In the end, the retractable-domed stadium that we got — opened to much fanfare on June 3, 1989 — was largely funded by the Metro Toronto and Provincial governments, their contributions each totalling about $56 million when adjusted for inflation in 2021 dollars.