The rumours are true. Toronto is upping its pinball quotient. First there was a downtown bowling alley, then came ping pong and last week we saw the opening of a store in Parkdale that sells old-school video game systems. Next up, naturally, is pinball and it will come in the form of a pinball-themed cafe that will open in Spring 2012 next to Yummy Stuff.

While details on the cafe are sparse so far, the windows at 1662 Queen St. West are papered over with coming soon signs in the window. Between the gaps in the paper it's obvious the space still needs an overall. It hasn't changed at all since The Banyan closed its doors save for the addition of two vintage pinball machines collecting dust. There's also already a web site, an email list and the promise that the Pinball Cafe will by Toronto's only vintage pinball gaming room and cafe.

According to the web site the pinball will be complemented with an authentic, fully restored 1973 Wurlitzer Americana jukebox, classic candy and chocolate bars, quality baked goods and, of course, coffee, cappuccino and espresso.

Here's a photo of how the outside currently looks. 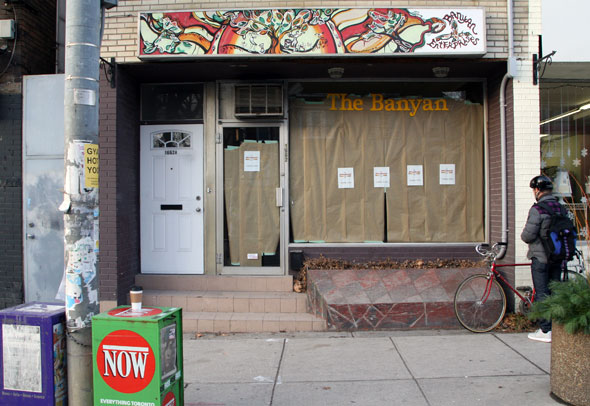 Are you excited for Toronto's first pinball themed cafe? Let us know in the comments below.