Chef Elias Salazar has dabbled in plenty of culinary ventures from opening his first restaurant, Kay Pacha, in 2017 to starting multiple pop-ups at Rush Lane & Co. and in Kensington Market.

The Peruvian-born cook is now putting old family recipes and everything learned from his grandmother to use in cooking up authentic Peruvian dishes out of the historic Dovercourt House, alongside fellow cook Marcus Sutton-Herbert. 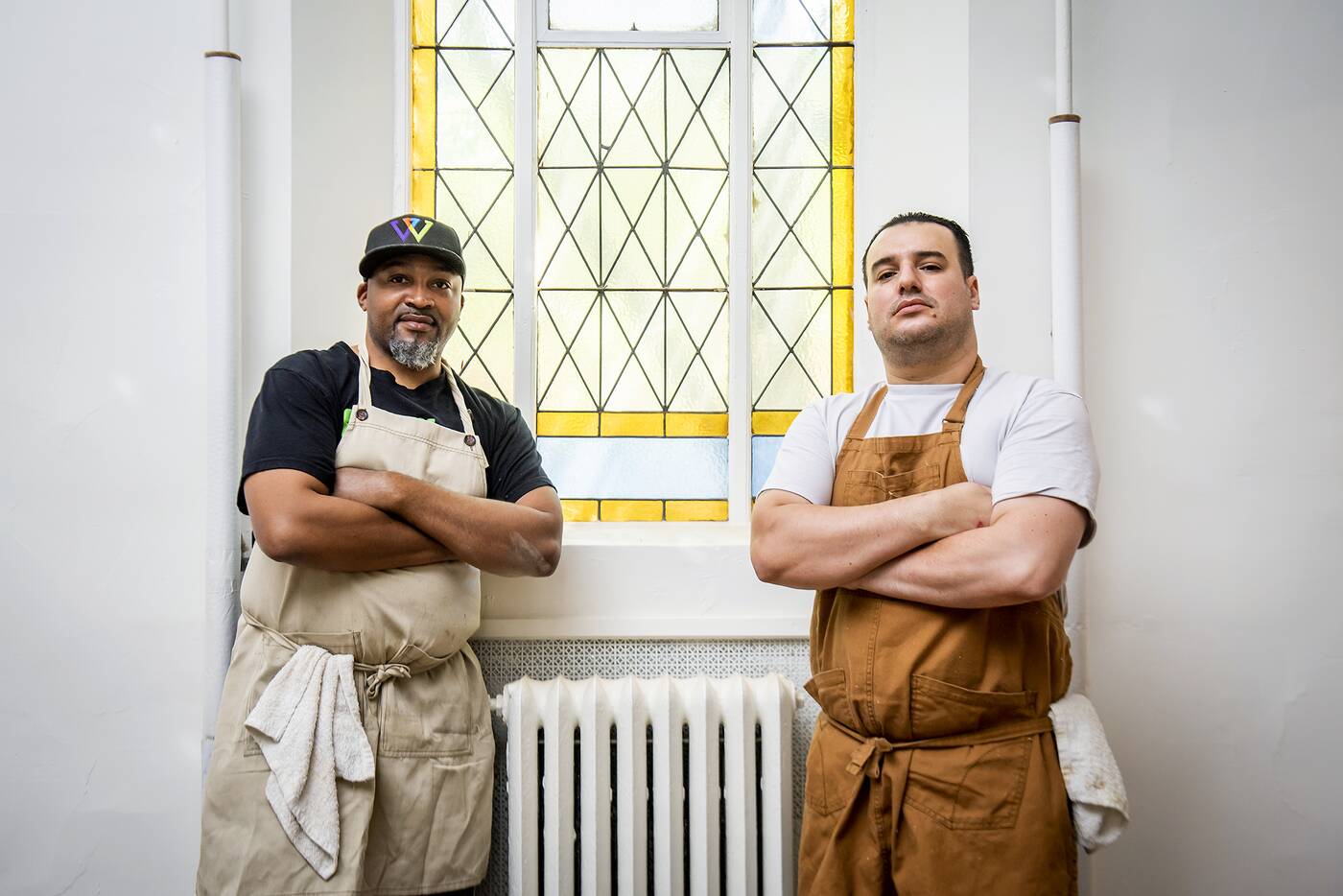 The latest project is called Waska Peruvian Chicken, with "waska" a word in the Quechua language meaning to eat, drink and enjoy. "If you're in a bar, eating, drinking, and just having a good time, someone will come up to you and say, 'Waska!'" Salazar told blogTO. 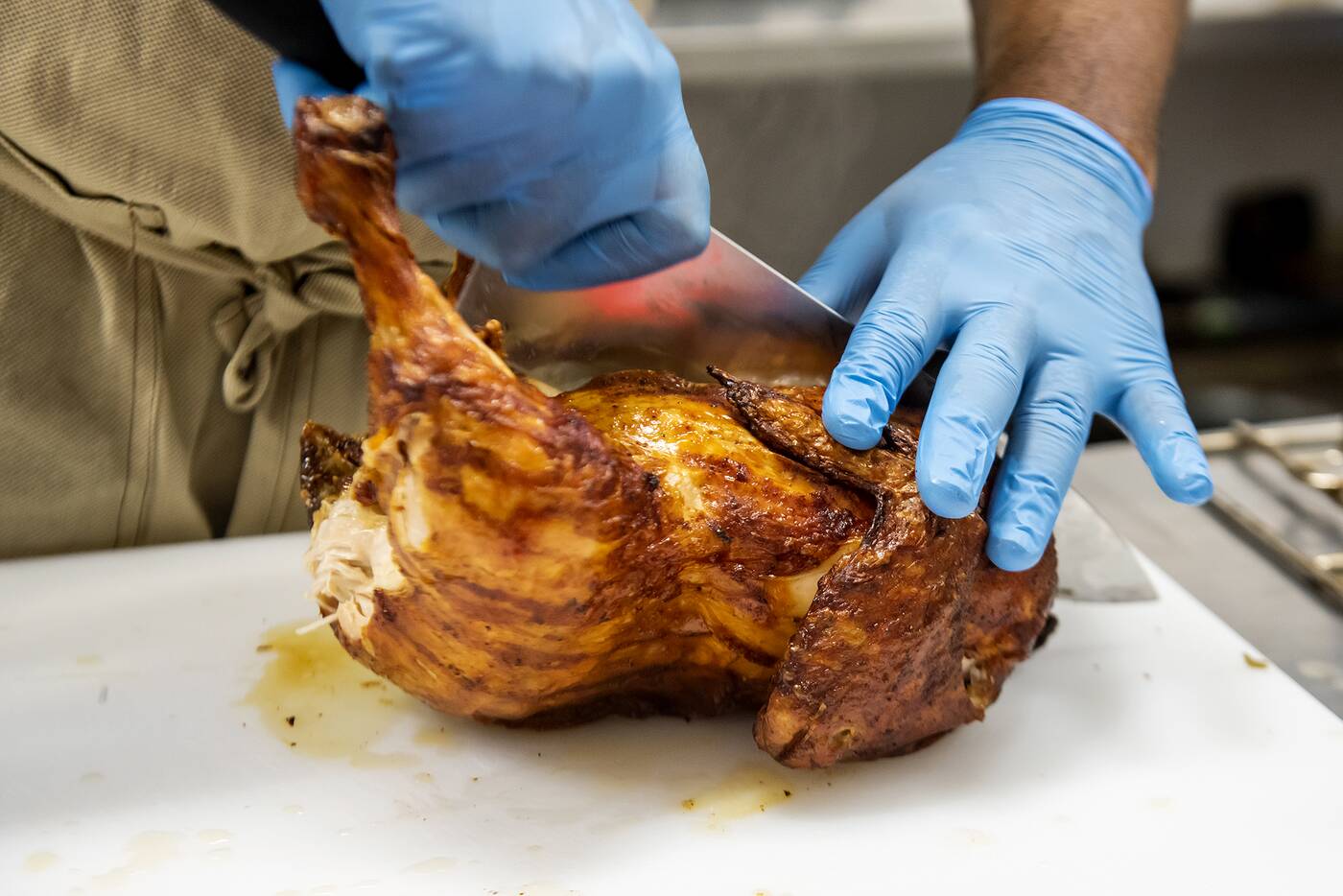 The main star of the menu is the rotisserie chicken made from Salazar's grandmother Perla's longtime recipe. The halal-friendly Pollo a la Brasa is brined for 48 hours in Peruvian peppers and spices and marinated before being slowly roasted.

Salazar went through four different sizes of chickens before deciding that a 2.5-pound bird provided the best results. Anything smaller and you've got a dried-out chicken. 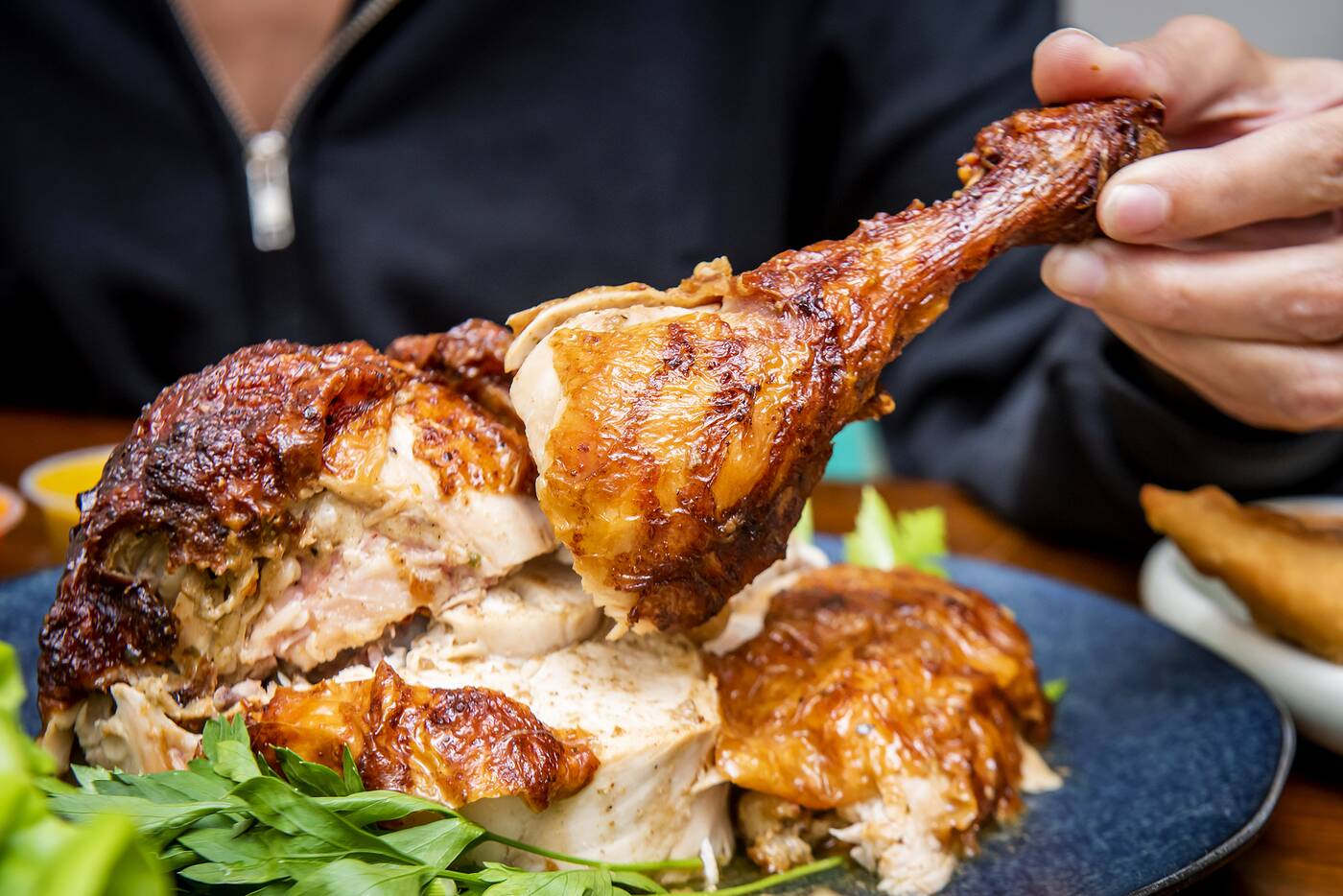 Los Chicos Brasa in Markham is the only other spot Salazar can think of that currently offers Peruvian chicken around here, so the juicy and flavourful rotisserie was a must.

"Peruvian chicken is super popular in the States and I wanted to bring the flavours here," Salazar says. 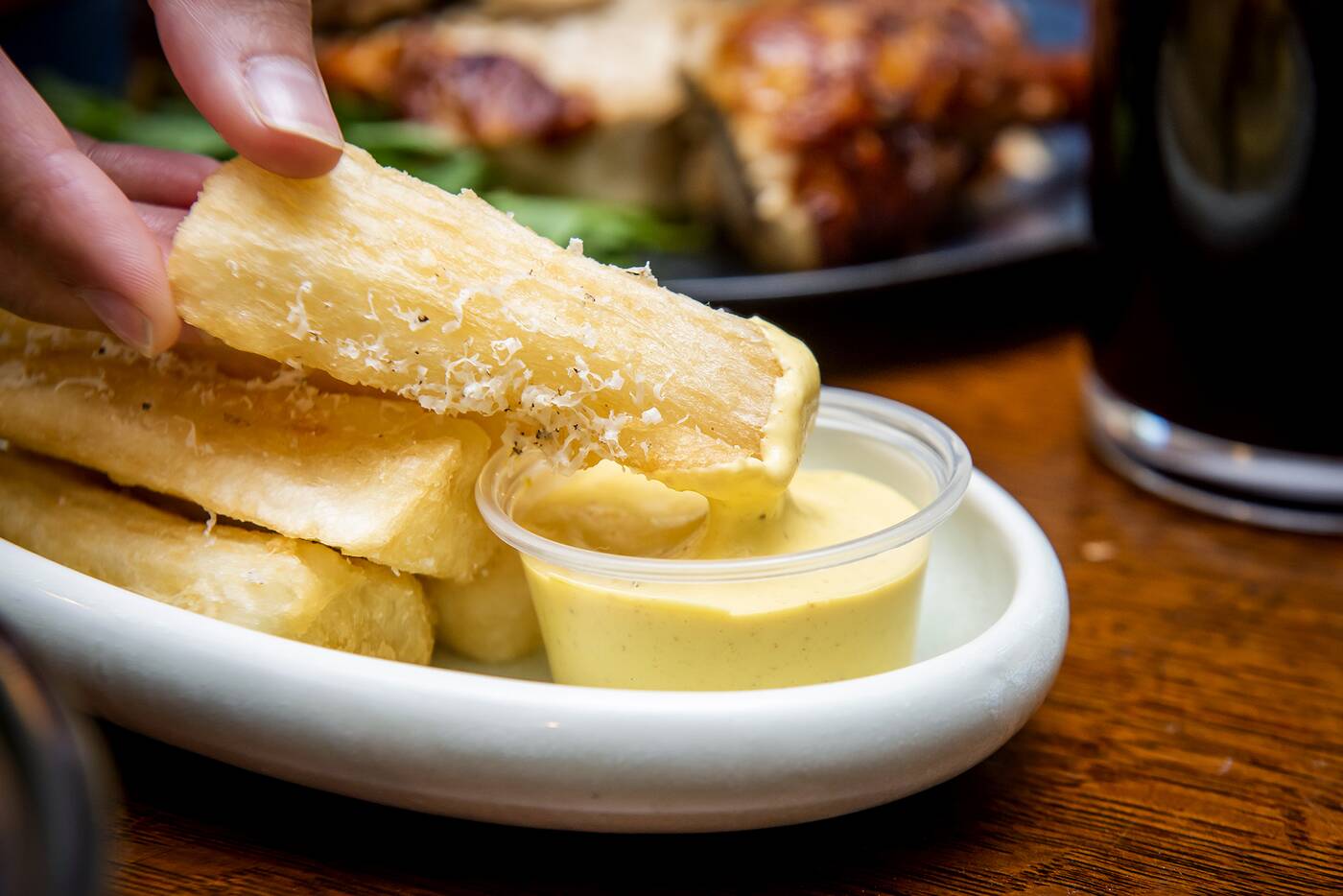 The chicken is best served with a side of crispy yuca fries and a selection of homemade sauces. When you go to a Peruvian restaurant, you'll find about three to seven sauces at any given time, and Salazar always has at least three at the ready.

There's chimichurri, Creole pepper sauce, and huancaina, the go-to sauce for Peruvians made of queso fresco and yellow Peruvian peppers. 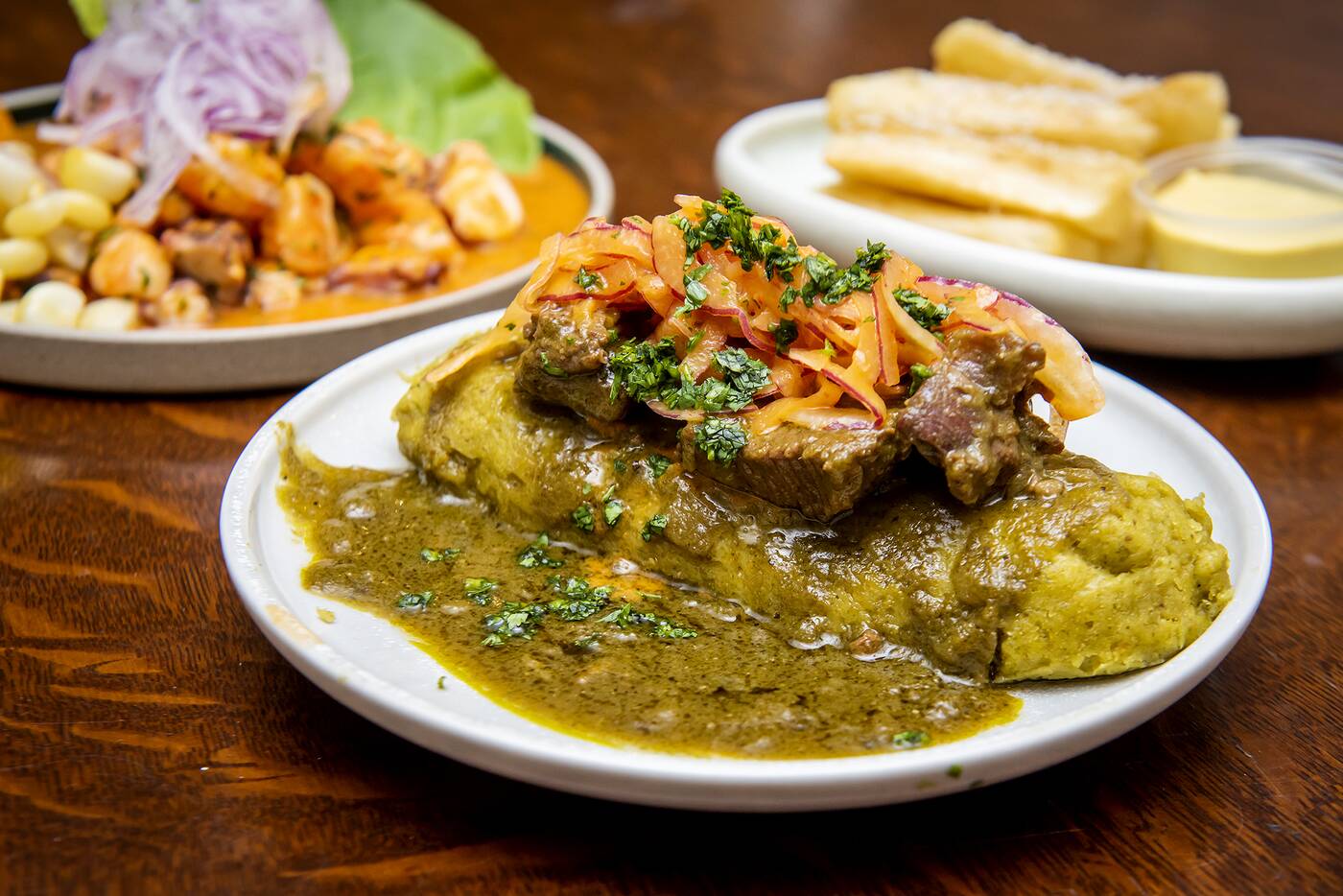 There are plenty more classic Peruvian options coming out of Salazar's kitchen in the old building that used to host weekly dance classes. Like the green corn tamales, topped with a lamb stew, pickled onions and cilantro. 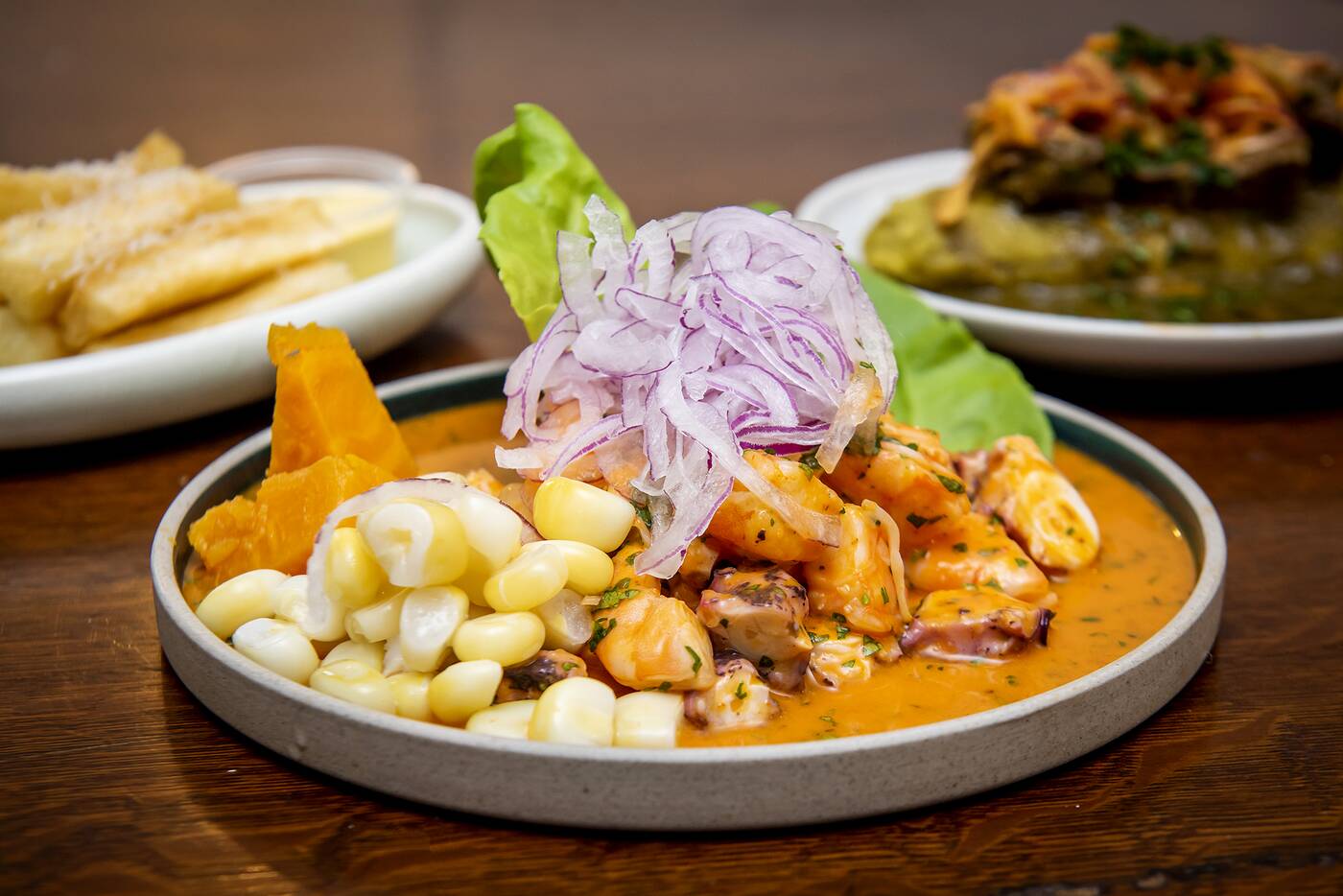 Two ceviches are currently on the menu: classic corvina ceviche, which is made with cancha, a crunchy toasted corn nut, and ceviche especial with choclo, a large-kernel Peruvian corn. This one also gets octopus, shrimp, red onions, and an aji rocoto pepper and leche de tigre marinade. 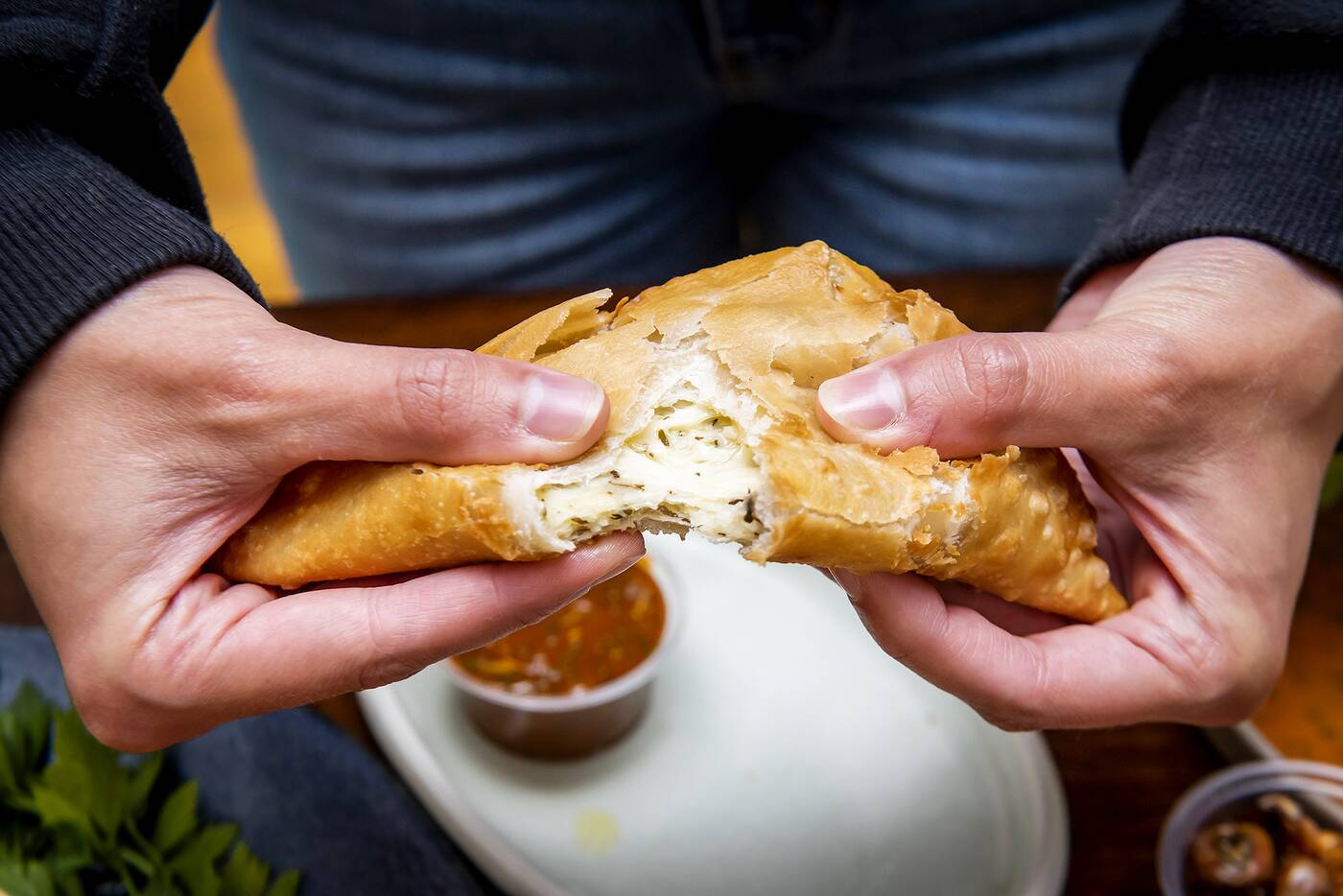 While another South American favourite, empanadas, comes filled with beef (ground sirloin) or cheese (buffalo mozzarella and queso fresco) and are deep-fried until they've got a nice crunch. 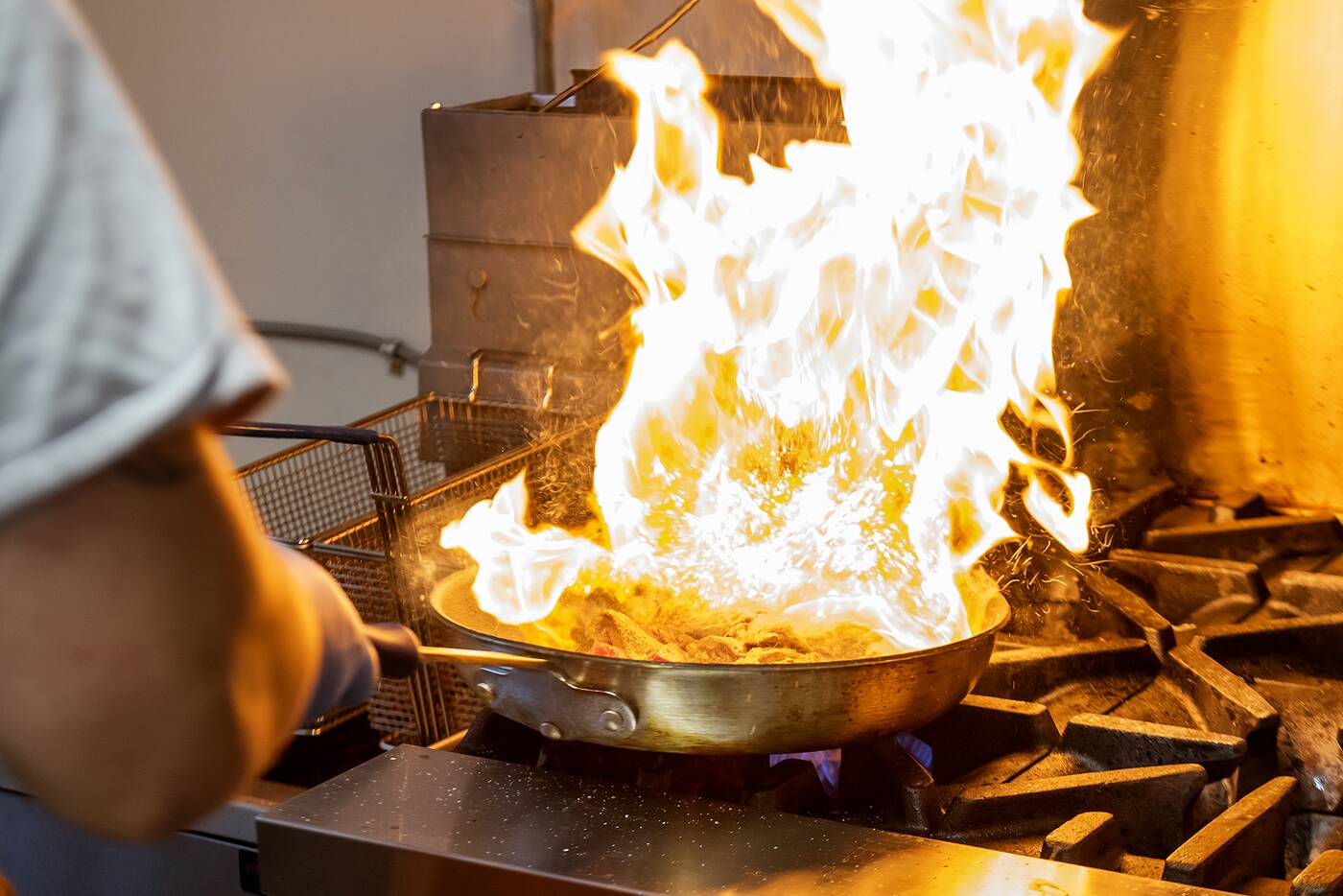 Tallarin Saltado is a Peruvian stir-fry that combines South American and Asian flavours. The wok-fried noodles are mixed in with top sirloin, plum tomatoes, red onions, scallions, both a Peruvian and Chinese soy, and one of his grandmother's famous sauces. 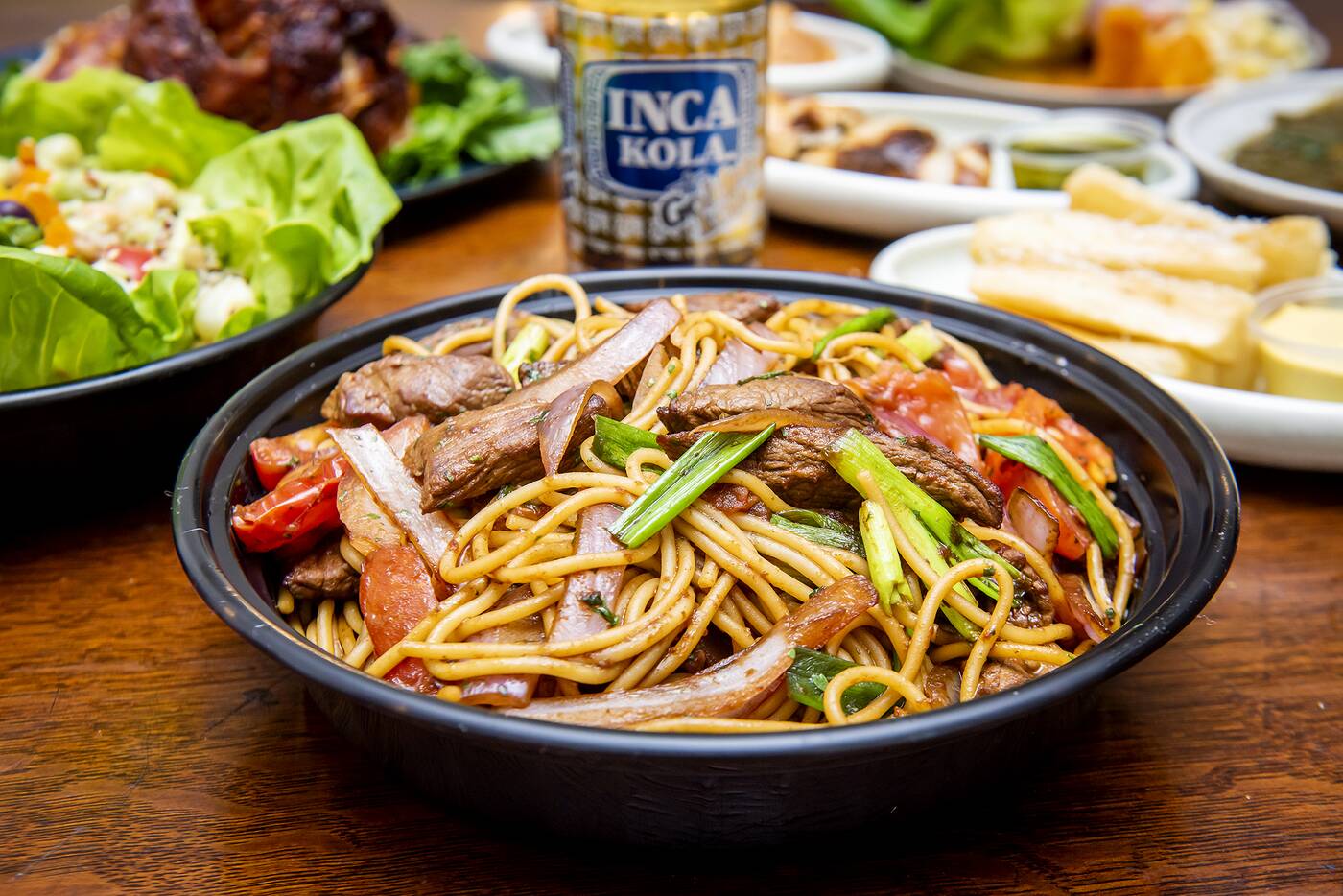 Plenty of nods to his Abuela are on the menu, the one who taught Salazar to cook while he was growing up in the port city of Callao, Peru. 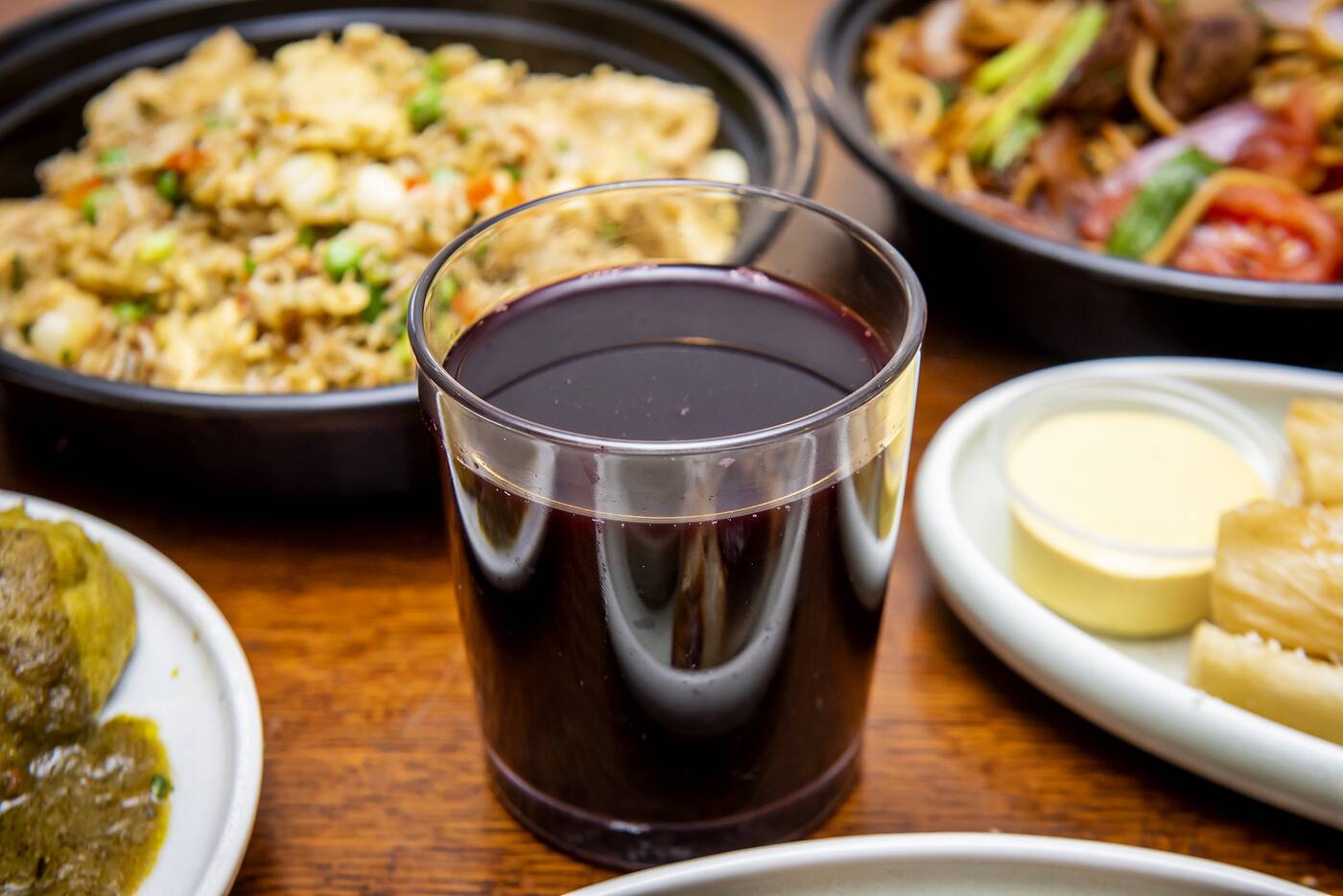 Older than the family recipes on the menu is the purple corn chicha that has been drunk in Peru for thousands of years. A swig of this antioxidant-full beverage tastes a bit like throwing a bunch of cinnamon hearts in your mouth. 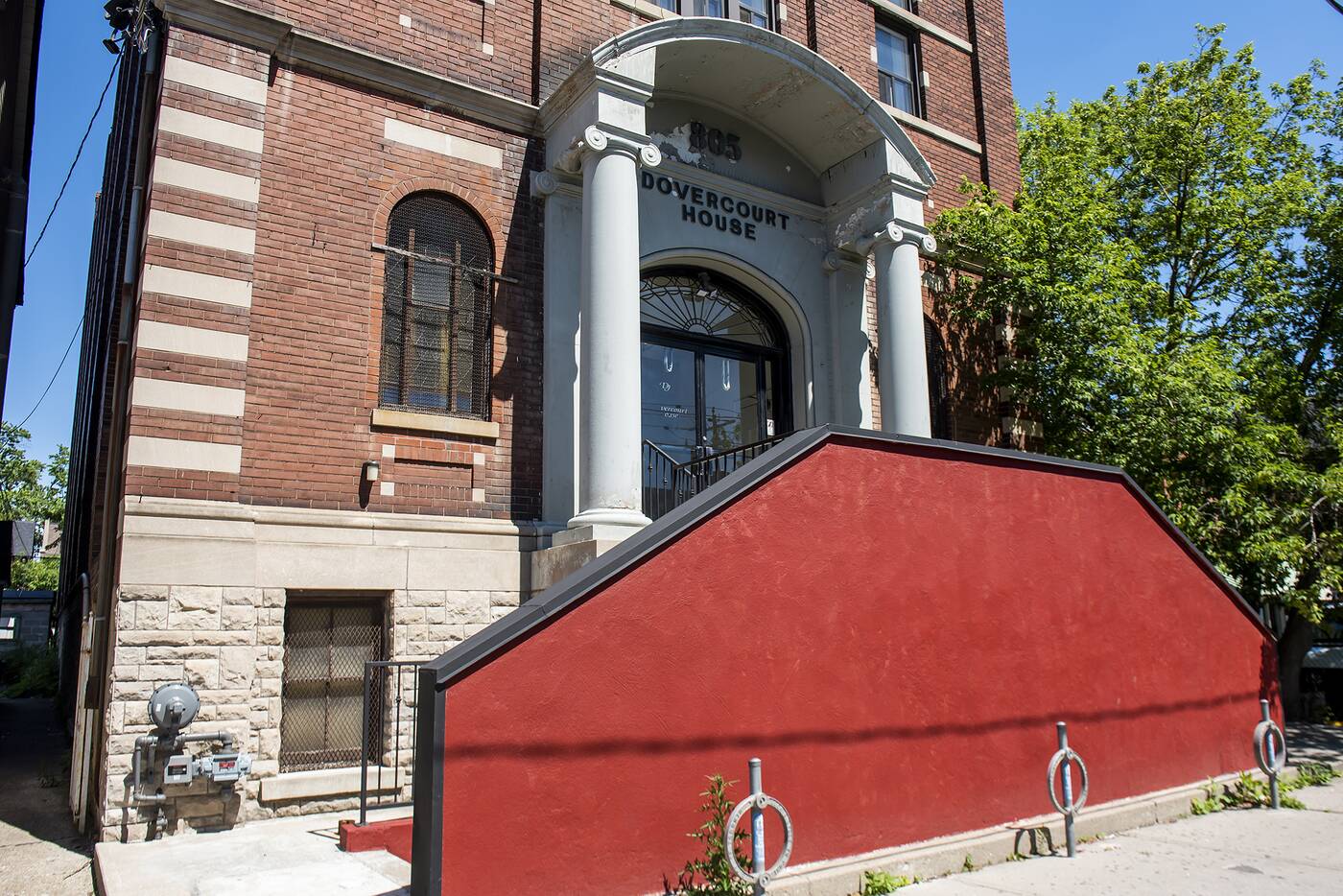