Say Cheese opened in the Annex several months ago, but has been operating mainly as what owner Nigel Koo terms a "test kitchen." It wasn't until about a week ago that they finally settled on a menu of gourmet grilled cheese sandwiches, and erected a bold sign outside. Foot traffic in the interim was predictably sparse.

Koo was also a partner in the space's former business, Mon Berri . Originating out of his wholesale yogurt business, the storefront faltered even as his wholesale operations flourished. His disappointment in the venture's failure is obvious, as is his tentative optimism for the new business. 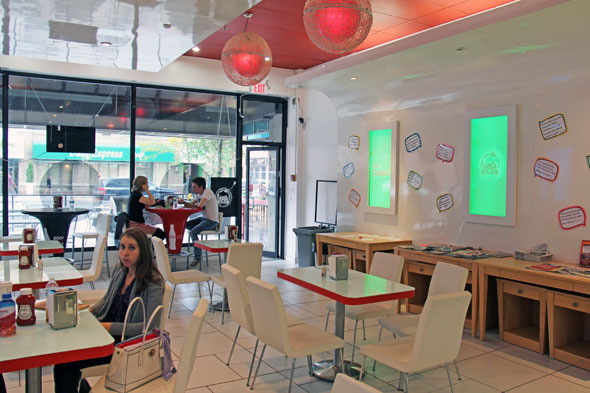 "Why grilled cheese?" is both an obvious and stupid question. It's a market that's becoming saturated , but it's not quite a trend--it's the ultimate comfort food, and the poor student's go-to snack. "I ate so many grilled cheese sandwiches in school," Koo tells me.

The interior has maintained some of the fluorescent accents I vaguely remember from Monberri. Bright, pastel booths, a flat-screen pumping out comedy, and a scatter of chuckle-inducing cheese-related quotes round out the space, with two high-top tables by the entrance. The patio is already beginning to look bleak as the weather cools, but you'll still sometimes see Koo or chef Chris Blondell cooking on the outdoor grill. 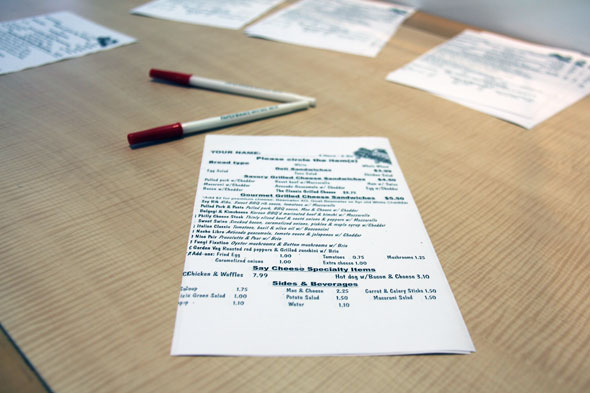 The menu, which features oddballs like the Bulgogi and Kim-cheese (which Koo swears strikes a fine balance between the sharpness of the kimchi and smooth, rich mozzarella), was a labour of love. During its not-quite-open phase, the restaurant was host to parties for Koo and Blondell's friends where they feasted on an array of unusual sandwiches.

The sandwiches themselves are simply delicious. Their list of sides includes mac 'n' cheese ($2.25), soup ($1.75) or my choice, a very simple and petite spring mix salad with a light vinaigrette ($1). You can also add premium cheese such as Beemster XO for an extra $2. 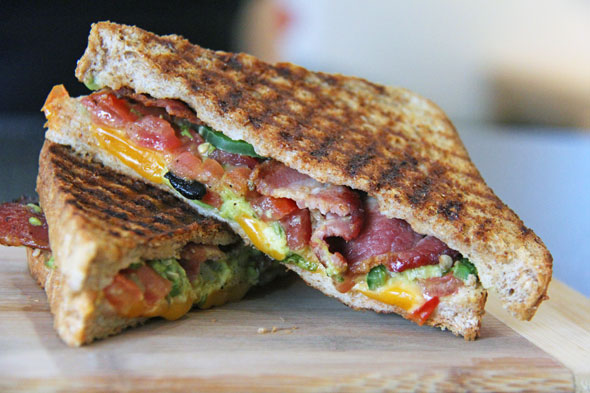 First up is the Nacho Libre ($5.50), which combines homemade avocado guacamole, tomato salsa, jalapenos and extra-old cheddar for an incredibly spicy sammie. As with the mushroom sandwich below, I opt for bacon (additional $2) to avoid full-on vegetarianism. You can also dress yours up with add-ons such as fried egg ($1), fried mushrooms ($1.25) or gluten-free bread ($1). It's a piquant dish that nicely approximates Mexican flavours, but the cheese itself gets drowned out by the ample guacamole, and really, the cheese should be front and center. 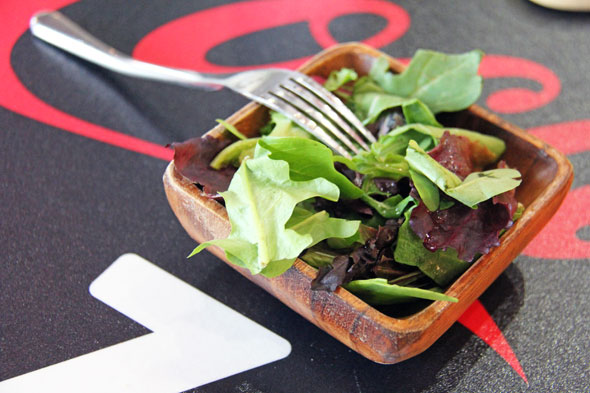 The pulled pork and pasta sandwich ($5.50) is a perplexing little number. Built (I assume) on the notion of uniting two great, if humble, cheese dishes, it suffers from carb redundancy. It's a very dense dish, and although the cheese is there--mozzarella and cheddar--it's subsumed in bread, pasta, and yes, pulled pork.

The last is delicious; marinated in mystery spices (when gently prodded to reveal them, Blundell exclaims "I'm not telling you!" in hopefully mock outrage, although cayenne and paprika are good guesses), then slow-cooked, it's incredibly tender and retains an almost smoky flavor. With the added touch of Bechamel sauce, it's truly the most haute sandwich that five bucks and change can buy. 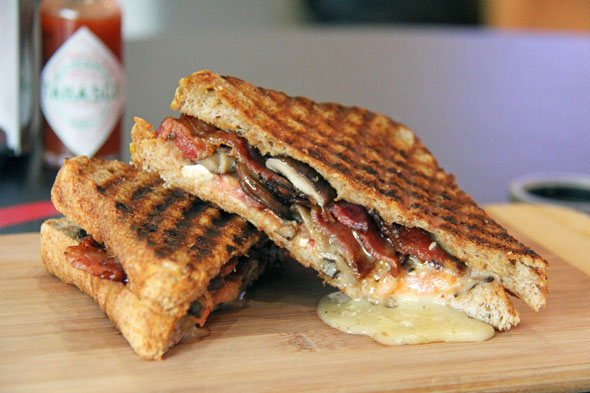 Fungi Fixation ($5.50) sees brie, oyster mushrooms, button mushrooms, and tomatoes (an extra $0.75) blended into a decadent sandwich. Not only my favourite on the menu, but quite possibly my favourite in recent memory, the mushrooms take second billing to the cheese, which is lush and earthy.

There's a drop or two of white truffle oil for pungency and character (and depth of flavour), but they don't advertise this on the menu. Why? Because they were able to score a deal on it, and it's in limited supply. Something about this warms my cockles--it's indicative that compared to, say, Cheesewerks , these guys are underdogs.

When I stop it, the clientele is students spilling secrets, students talking school, and students doing the ol' grab-and-go. The area is, undeniably, student centre, but Koo argues that there's not really a non-pub option for hanging out in the immediate area. True, you can walk a bit west and hit the strip of restaurants nestled between Spadina and Bathurst, but affordability is a sticking point for Koo. 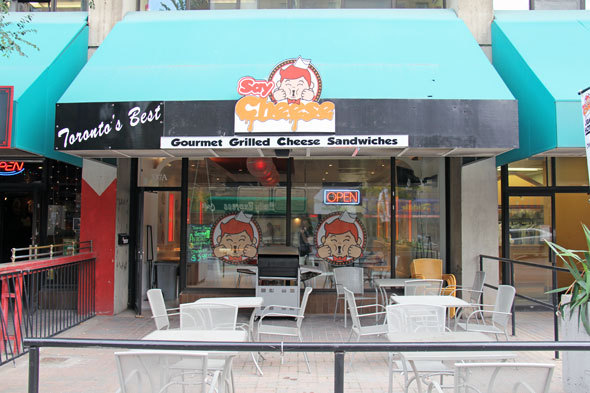 "We've done a lot of price drops, and I'm always negotiating with suppliers," Koo says. With Kensington Market nearby and a pass to the Food Terminal, Say Cheese strives for freshness with most sauces made in-house--except for the bottled Heinz on each table, of course. Grilled slowly and thoroughly, the sandwiches come out surprisingly compact, but make for a satisfying snack more than a full meal. I suggest you do as we did, and order three to share--the price point more than allows it.