Pearl Diver is a revamp of Starfish , the well-known oyster/seafood bar on Adelaide East. As is evident by its new name, it's still an oyster/seafood bar, but as part of its modified identity, the space and the menu have received updates.

In terms of its physical makeover, new cozy booths are made of repurposed old wooden church pews from the Anglican Diocese of Toronto across the street, giving the restaurant a more casual, homey feel than its predecessor. 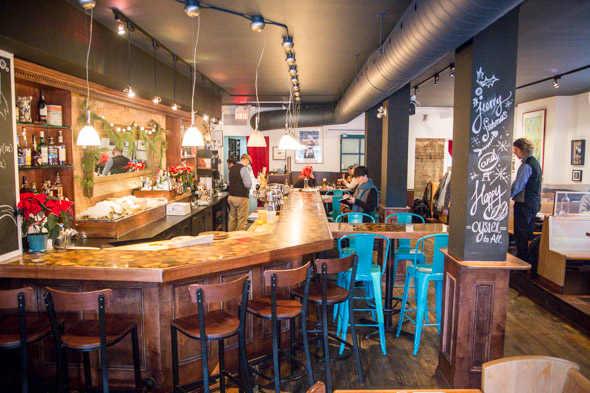 Some elements, like the shell-covered bar and the "hot tub" VIP table, remain the same so that the place isn't entirely foreign to former Starfish regulars. The aim is for Pearl Diver to be a neighbourhood local instead of a place just for special occasions. 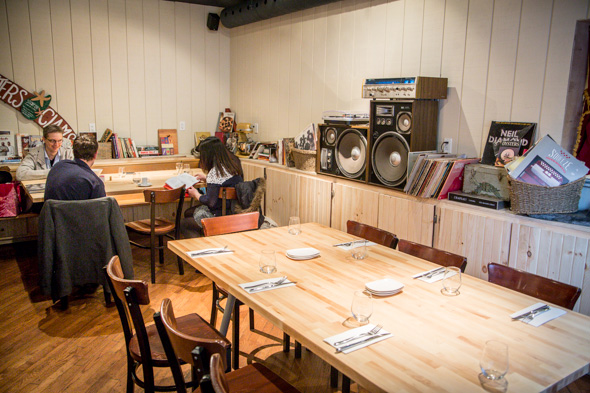 A back room for private events, dubbed "The Pantry," has a country-cottage kind of feel and is filled with cookbooks, issues of Lucky Peach, a record player and a growing collection of old records. The room has a direct window to the kitchen as well as one that will operate as a takeout window in the summer, offering picnic baskets with lobster rolls and frites for outdoor dining in St. James Park. 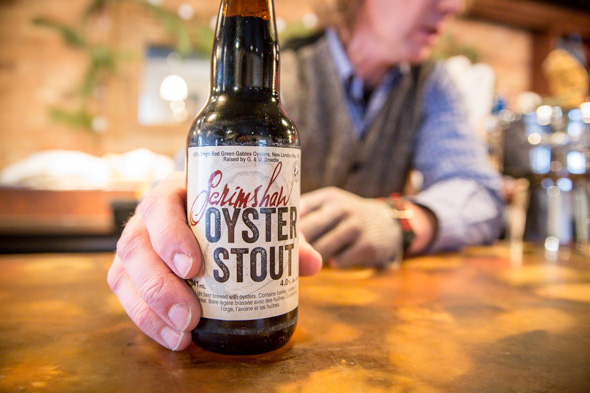 It's the perfect alcoholic accompaniment for eating oysters, but the bar also has Guinness, Harp ($4/$7.50), West Avenue Cider ($7/18-oz glass), a few Southern Ontario microbrews ($3.75/$7) and interestingly enough, a Gamay and a Chardonnay from Tawse Winery ($8/glass) on tap, if you're in the mood for something else. 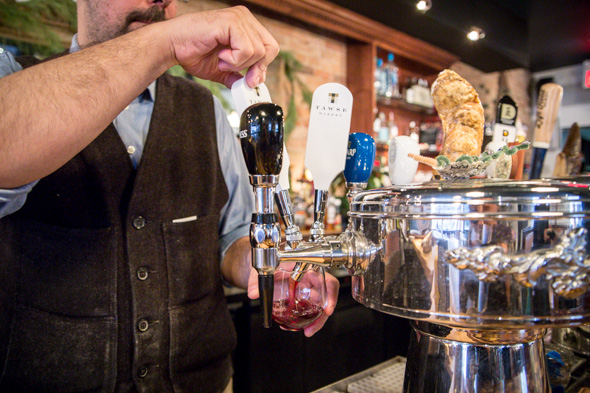 Depending on what's in season (although you don't have to worry about eating shellfish here during "r"-less months - times have changed), the oyster selection varies, but Pearl Diver tries to have some from each coast, plus European ones, available to cover all five species. 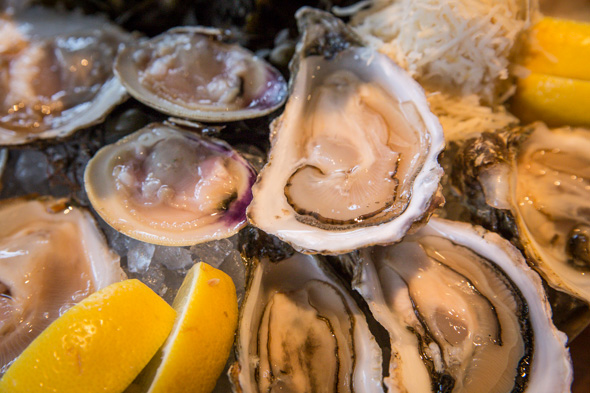 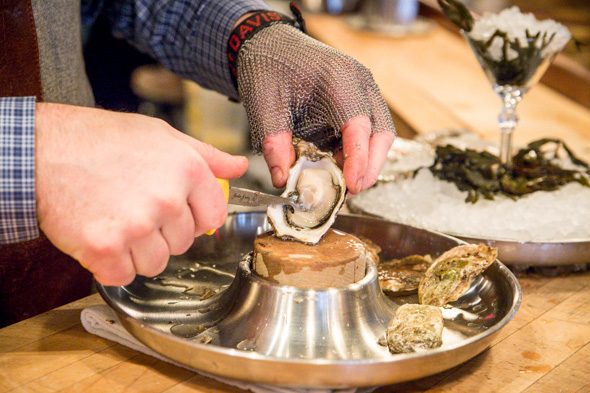 The food menu is filled with the kind of refined pub grub as well as a few of Starfish's popular items like its chowder and its sticky toffee pudding.

There's a very simply done daily whole-fish grill; the day we're there, it's sea bream (MP), with grilled lemon halves and sprigs of dill for garnish. The skin is crispy and the flesh inside is moist and flavourful. This is one of my favourite ways to eat fish. 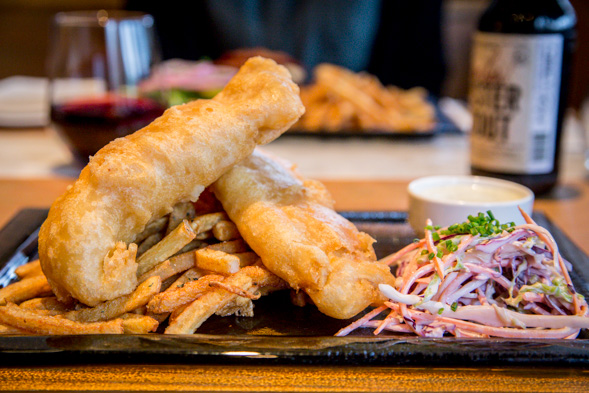 Fish and chips ($18) use fresh Atlantic haddock and are served with a house tartar sauce along with a cabbage and root slaw. The batter is light and crispy, the inside is tender and flaky and the accompanying frites are definitely not an afterthought. 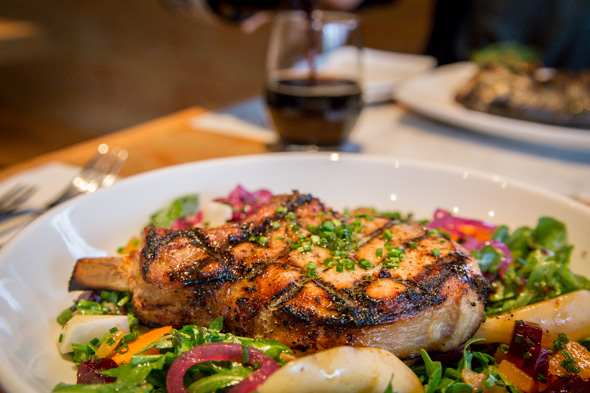 A local bone-in pork chop ($23) comes on a salad of greens with honey and thyme roasted root veggies, smashed fingerlings and a Concord grape reduction. The pork chop is a little dry, but the salad is delightful with bright colours and flavours. 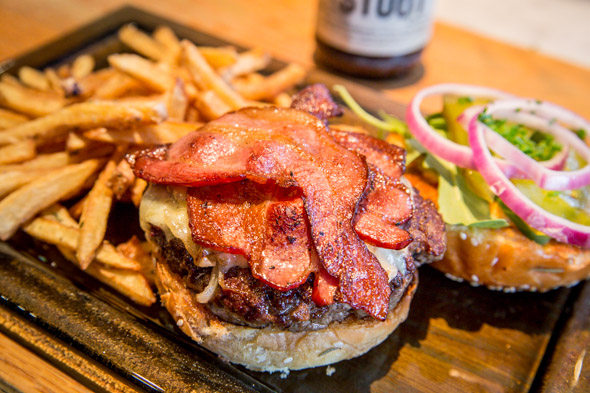 My personal favourite is the Pearl Diver Burger ($15) with Mennonite bacon and applewood-smoked cheddar ($1 extra each). The patty is made from ground, dry-aged, heritage-breed beef and topped with red onions, pickles, arugula and a secret sauce. It's cooked on a flat-top to seal in its juices, and it's just all-around tasty. 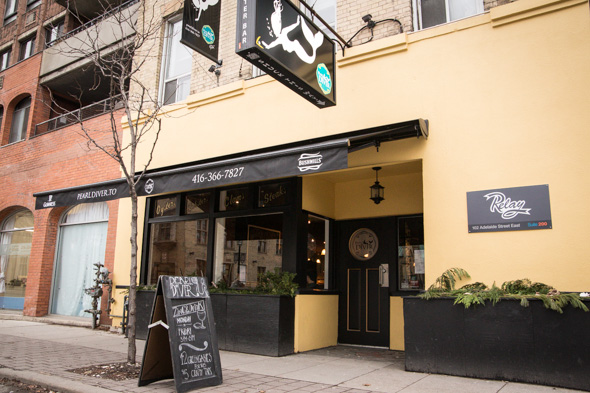