Knuckle Sandwich in East York packs a serious punch with its hearty menu dedicated to poutine, salads, soup and of course, a selection of massive sandwiches.

Co-owners, and longtime friends, George Talidis and Ran Han grew up in the neighbourhood and went to high school next door. "It's a little surreal being right back on the block," says Talidis. 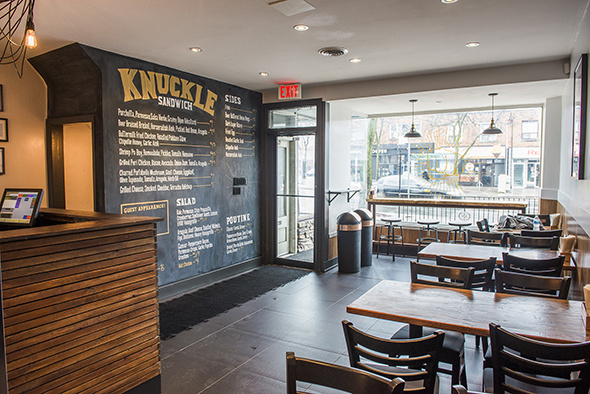 Clearly, opening up next to a school was a good move because the joint is jam-packed with students by noon (about 20 minutes after we took that photograph). Though, that's not the only crowd Talidis and Han hope to impress - they want to cater to young couples as well. 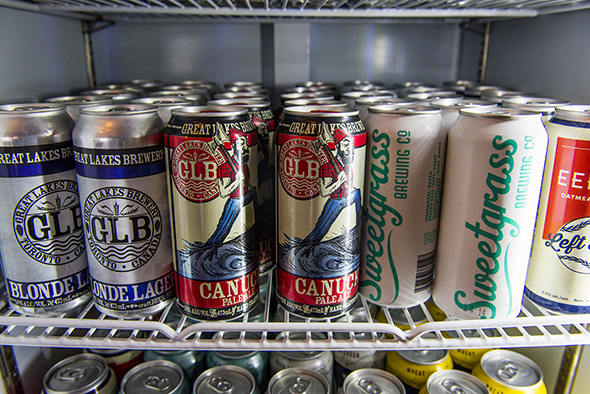 Much of their food also comes from nearby vendors. Fresh From The Farm provides their grain-fed, hormone-free meat. Talidis, however, remains tight-lipped about where he sources his bread from. 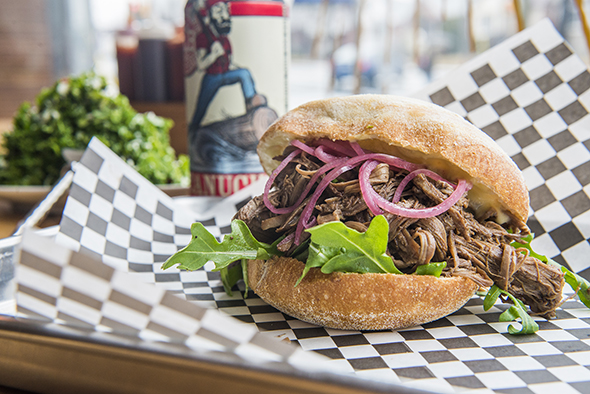 Regardless, chefs Kevin Brannick and Max Kuleszynski use it as substantial base for each one of their sandwiches. The beer braised brisket ($9.50), for instance, is simple and homey. They top it with pickled red onion, arugula and horseradish aioli. 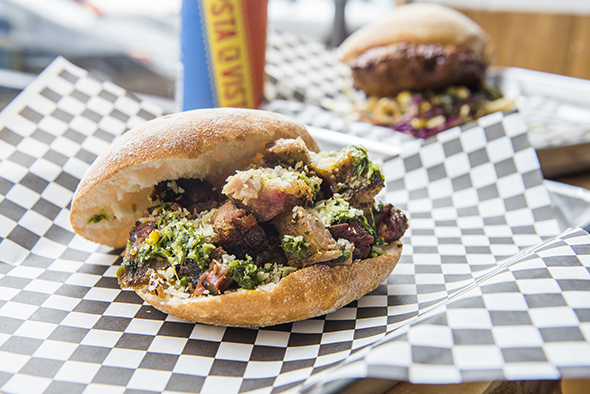 The porchetta sandwich ($9) comes with parmesan, salsa verde and grainy Dijon mustard; I have trouble lifting it up to mouth, so I end up digging in with a fork and knife. 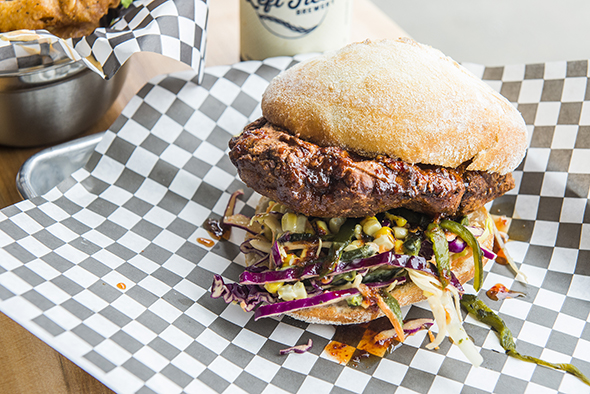 I have the same problem with the buttermilk fried chicken sandwich ($9) with roasted poblano slaw. It's a monster, albeit a rather tasty one. 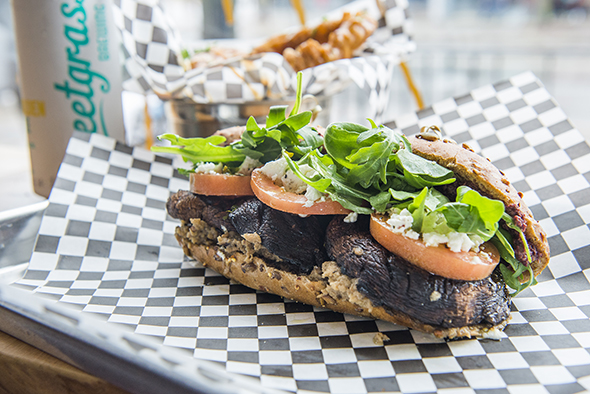 My favourite sandwich, however is the charred portobello mushroom on a multigrain roll. Despite being vegetarian, it's super filling thanks to a smattering of toppings, including roasted eggplant, feta cheese, arugula and olive tapenade - yes, there's a lot going on, but somehow it all works well together. 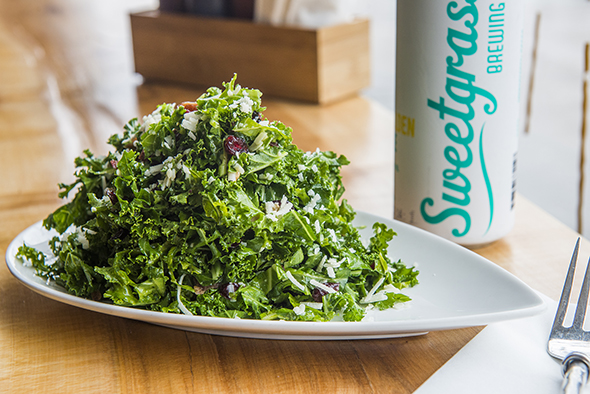 Those looking for lighter fare can choose from three salads ($5/$9), including one with kale, cranberries, prosciutto, sunflower seeds and a lemon and olive oil dressing. 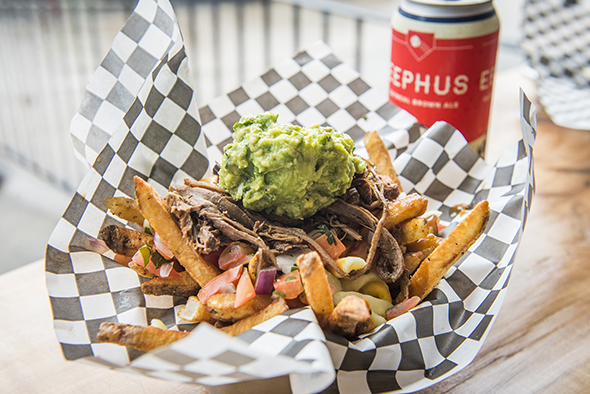 Although, there are also plenty of indulgent sides, including beer-battered onion rings ($4) and three types of poutine - brisket poutine with guacamole and pico de gallo is an especially decadent treat ($7). 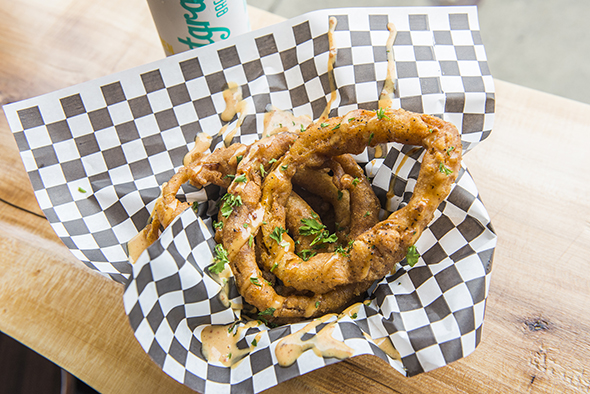 As I get ready to leave, it's hard to find a seat in the rustic-looking room and the kitchen is busy cranking out sandwiches and filling catering orders. 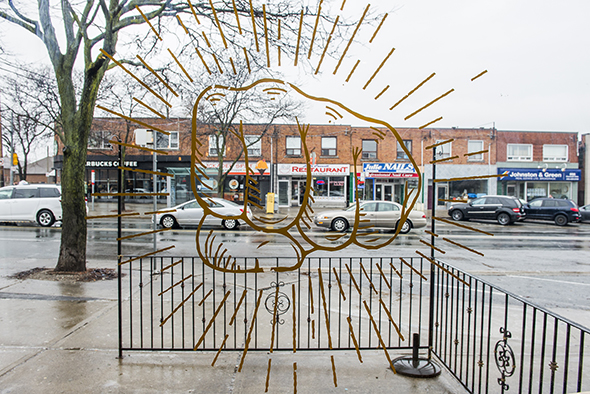 "We're definitely neighbourhood boys trying to just open up a cool little funky sandwich shop," says Talidis. And it looks like Knuckle Sandwich is just what the neighbourhood wants. 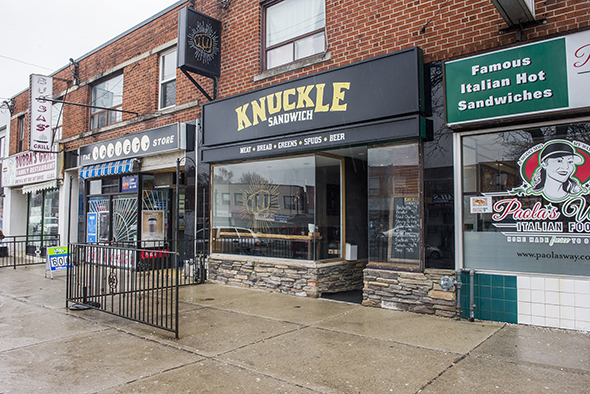