The word “drom” loosely translates to journey, voyage, or travel in Romani and Slavic languages.

They’re open from midday to last call every single day, and the live performance focus is on world music and dance like Brazilian, Russian, klezmer, flamenco and Balkan. 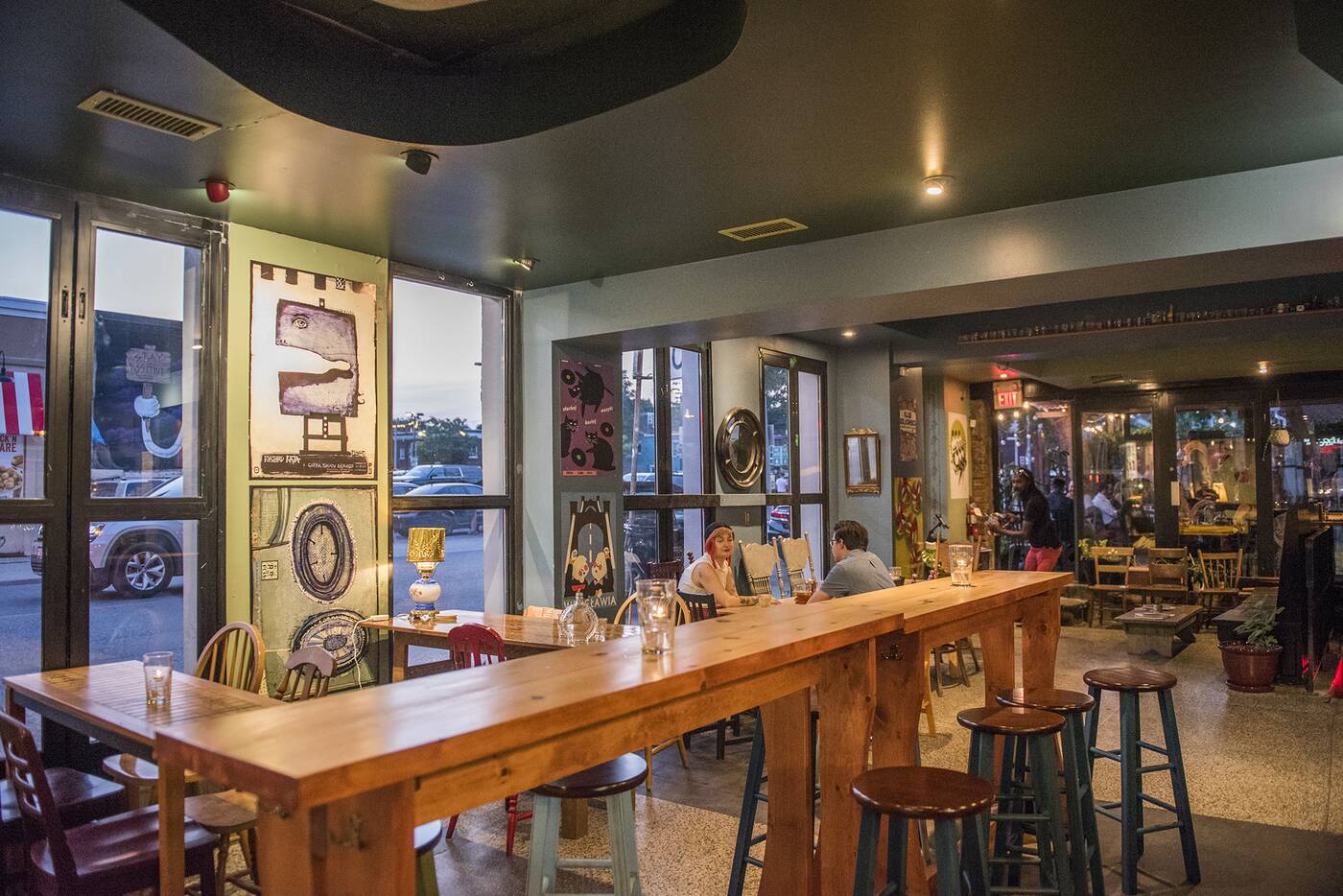 Drom holds about 75 inside; the building it’s housed in has been around since 1870. The old Duke sign is still fading away outside above glass doors that open fully to the street. 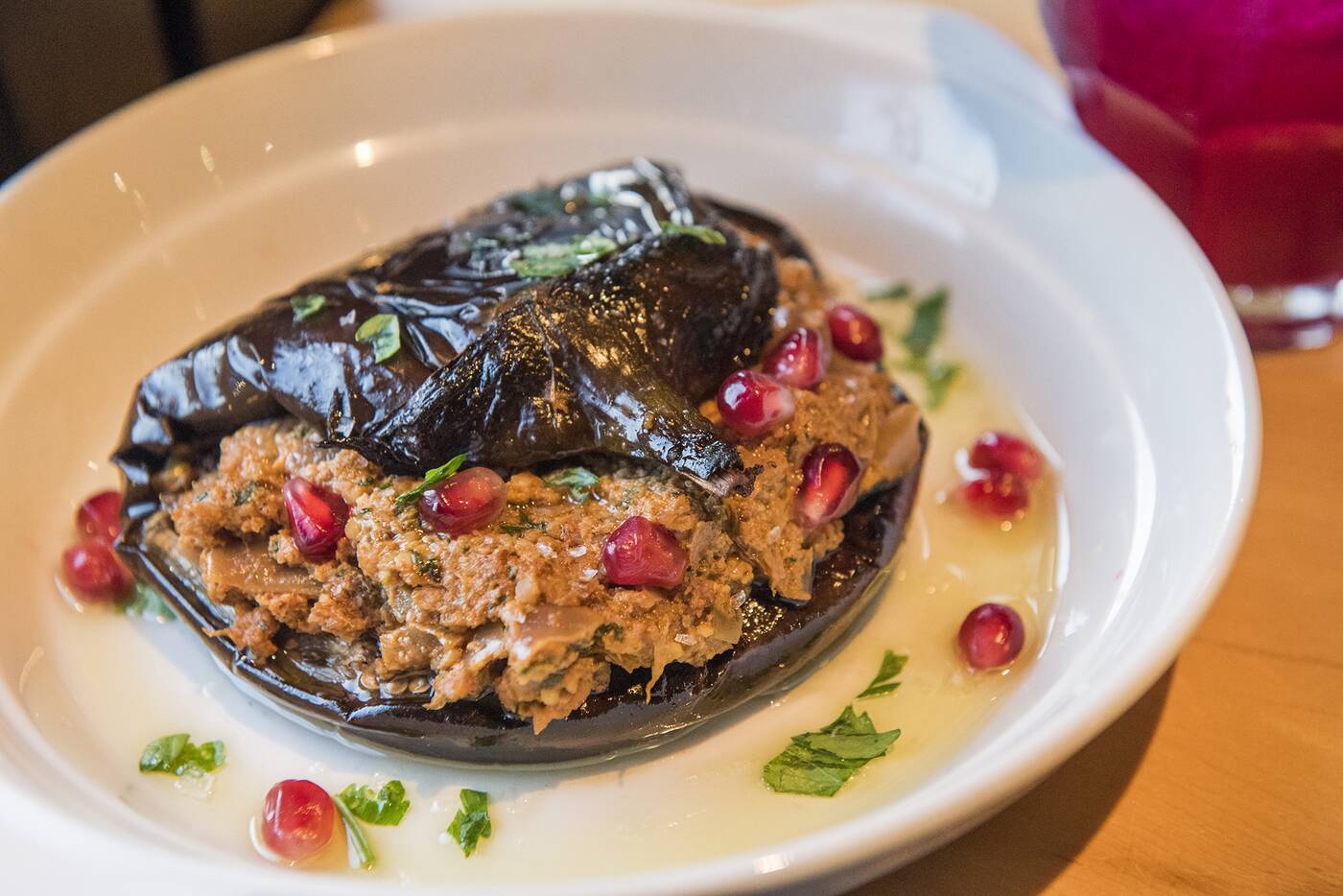 Eggplant ($9) is part of a selection of Georgian veggie dishes, a hearty pocket of soft roasted eggplant stuffed with a zesty adjika-spiced walnut paste and scattered with pomegranate seeds and torn cilantro. 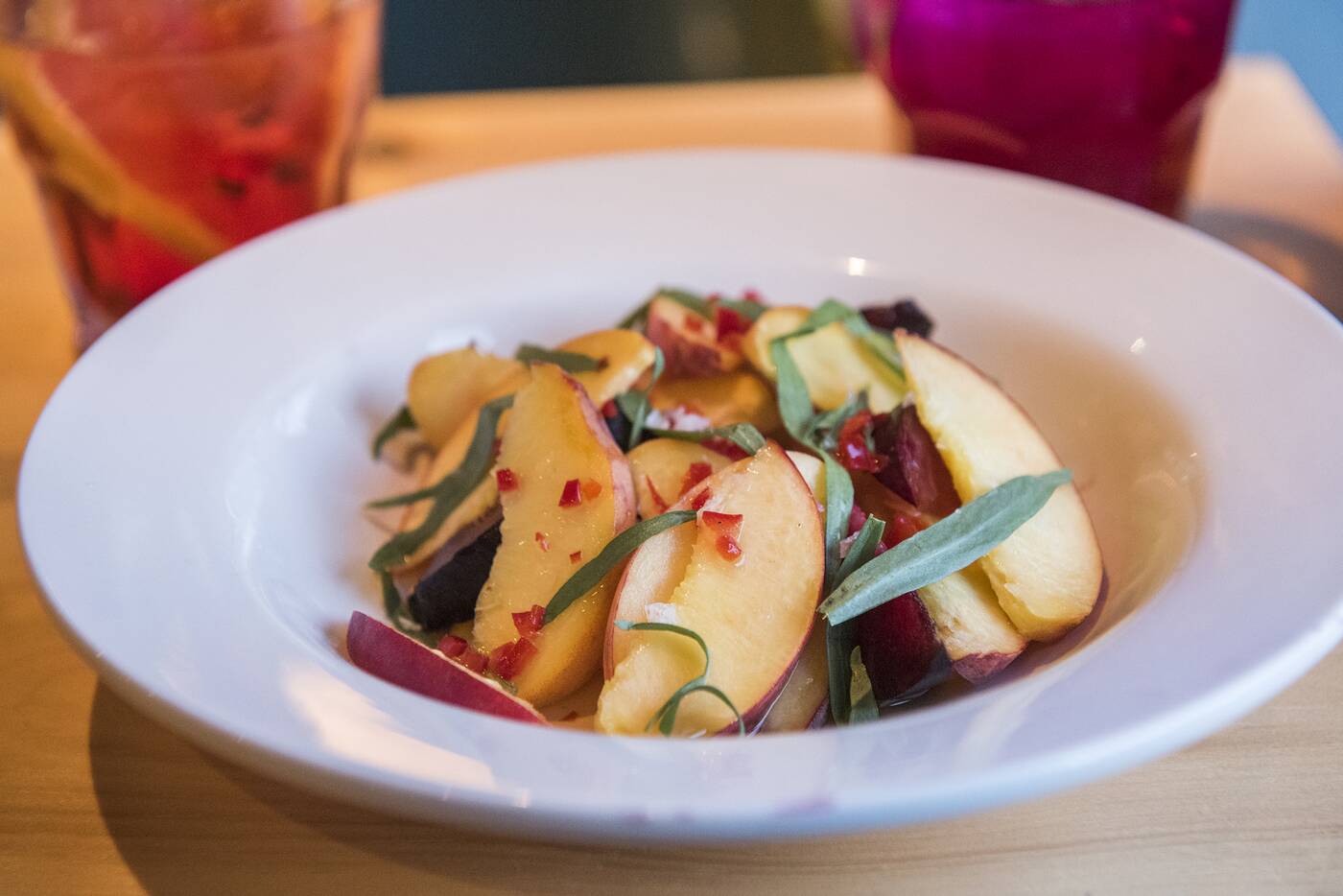 A savoury peach salad ($8) tastes like a summer garden. It’s a combination I’ve never tasted before of fresh peach, plum and aromatic tarragon set off by pungent chili and garlic. Go Georgian food. 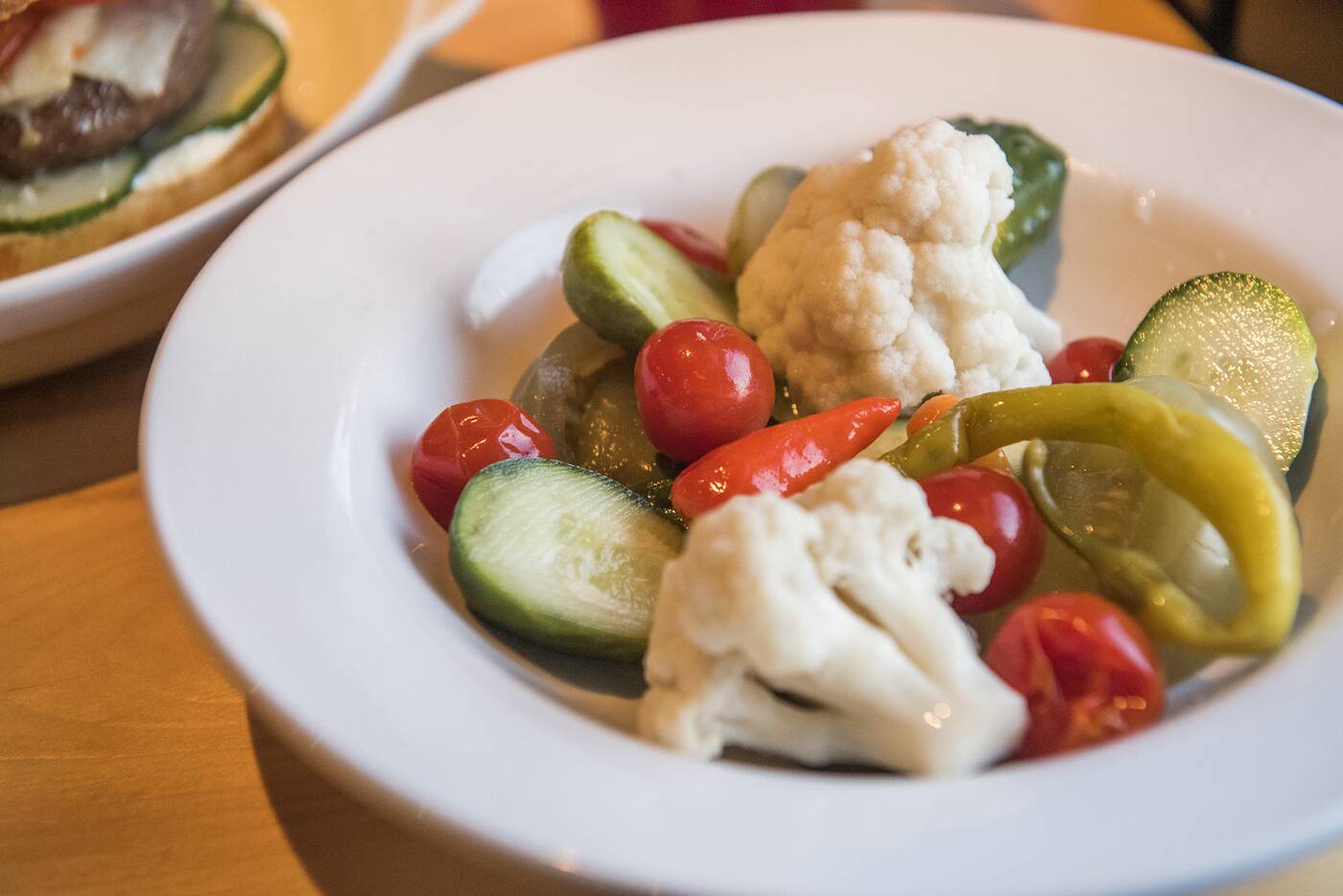 A $7 pickle plate ($4 for a half order) makes an inexpensive but flavourful side order or bar snack. 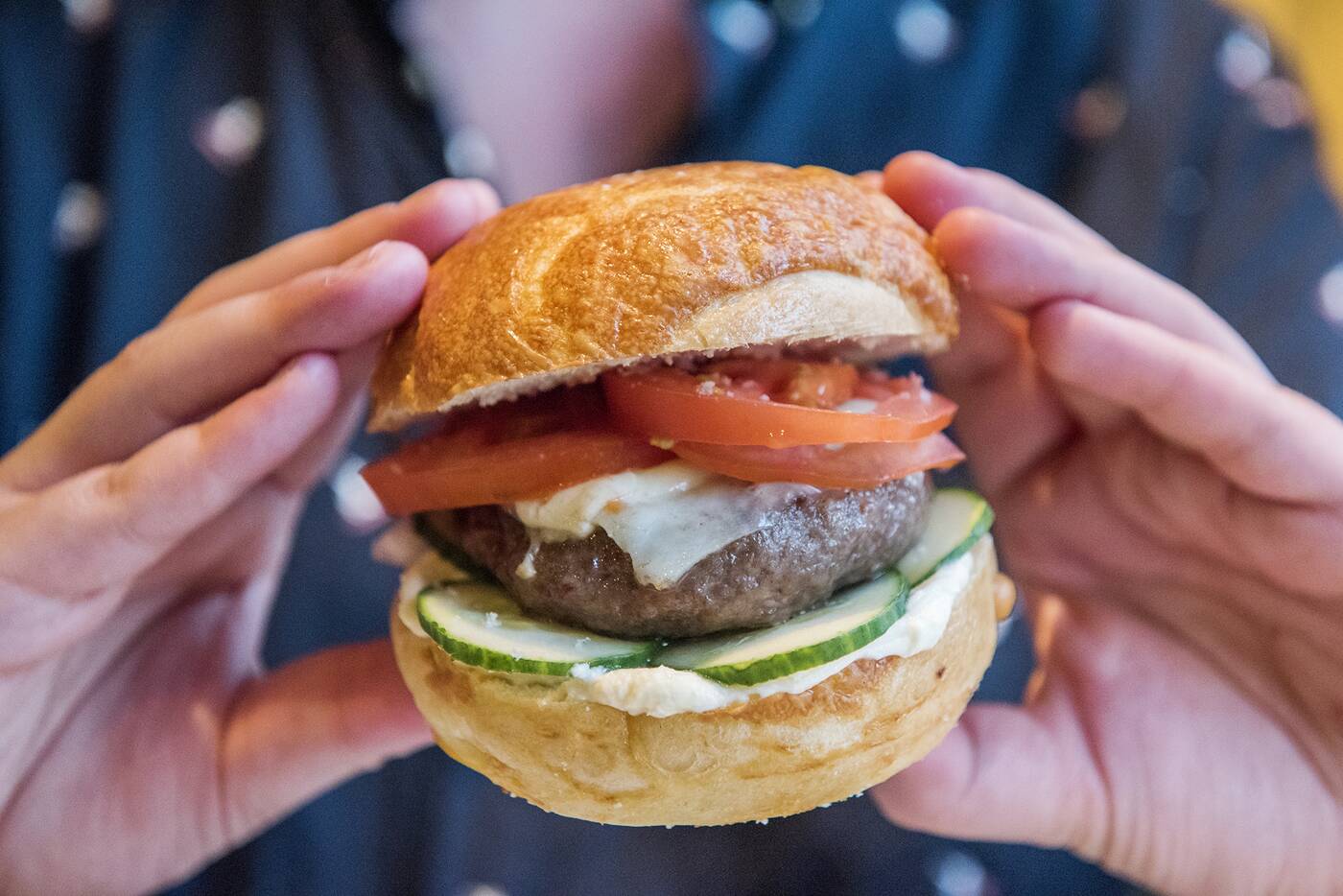 Pljeskavica ($10) is like a steamy beef burger and a cream cheese bagel had a baby. It’s not cream cheese on here though, it’s kajmak, a slightly more tangy Balkan variation, though the cucumber, onion and tomato on here invite the comparison. 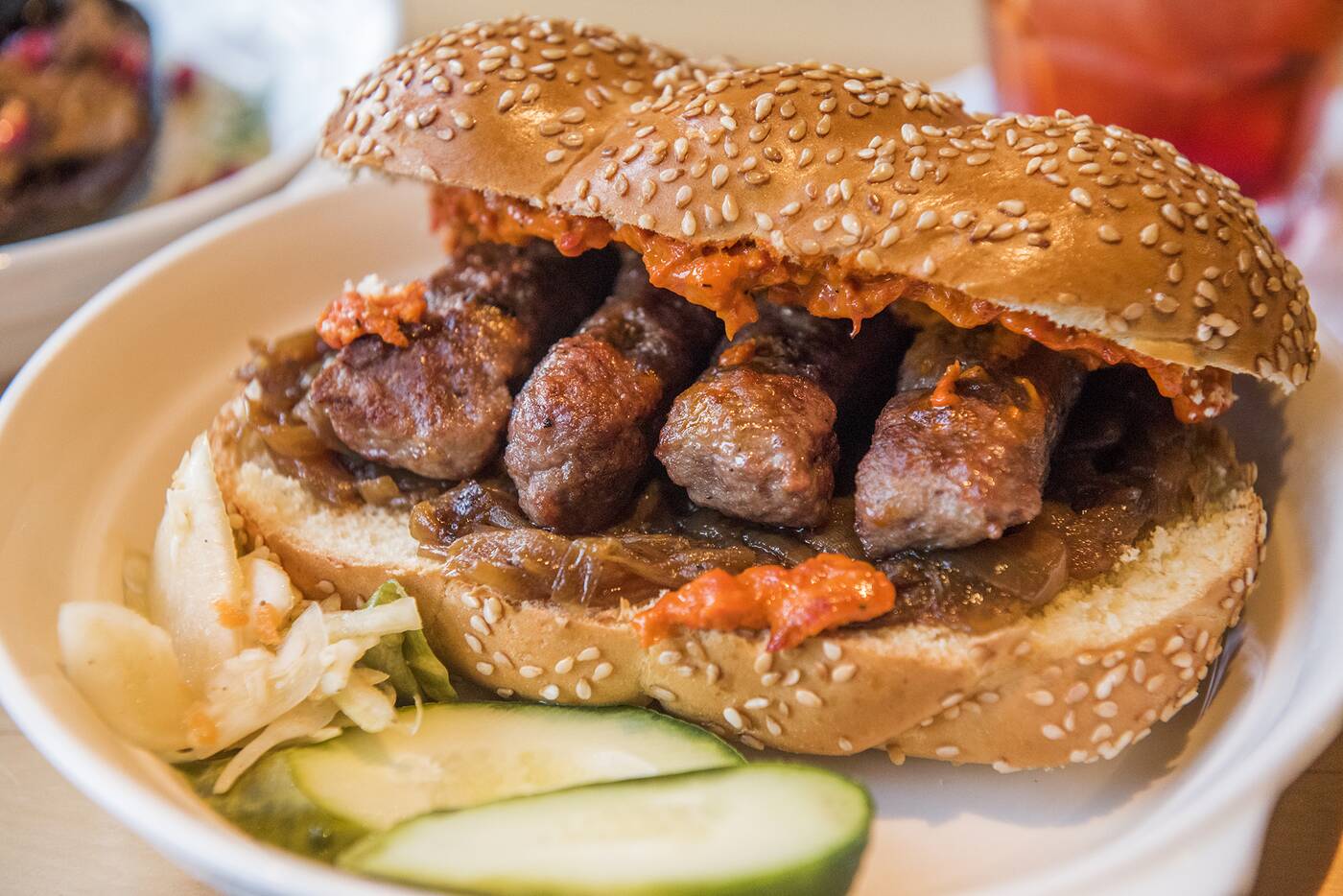 Cevapi ($10) makes a traditional Balkan dish into a more accessible sandwich, mini-sausage-like beef and veal kebabs presented on a long sesame seed bun with the traditional accompaniment of ajvar red pepper paste along with caramelized onions. 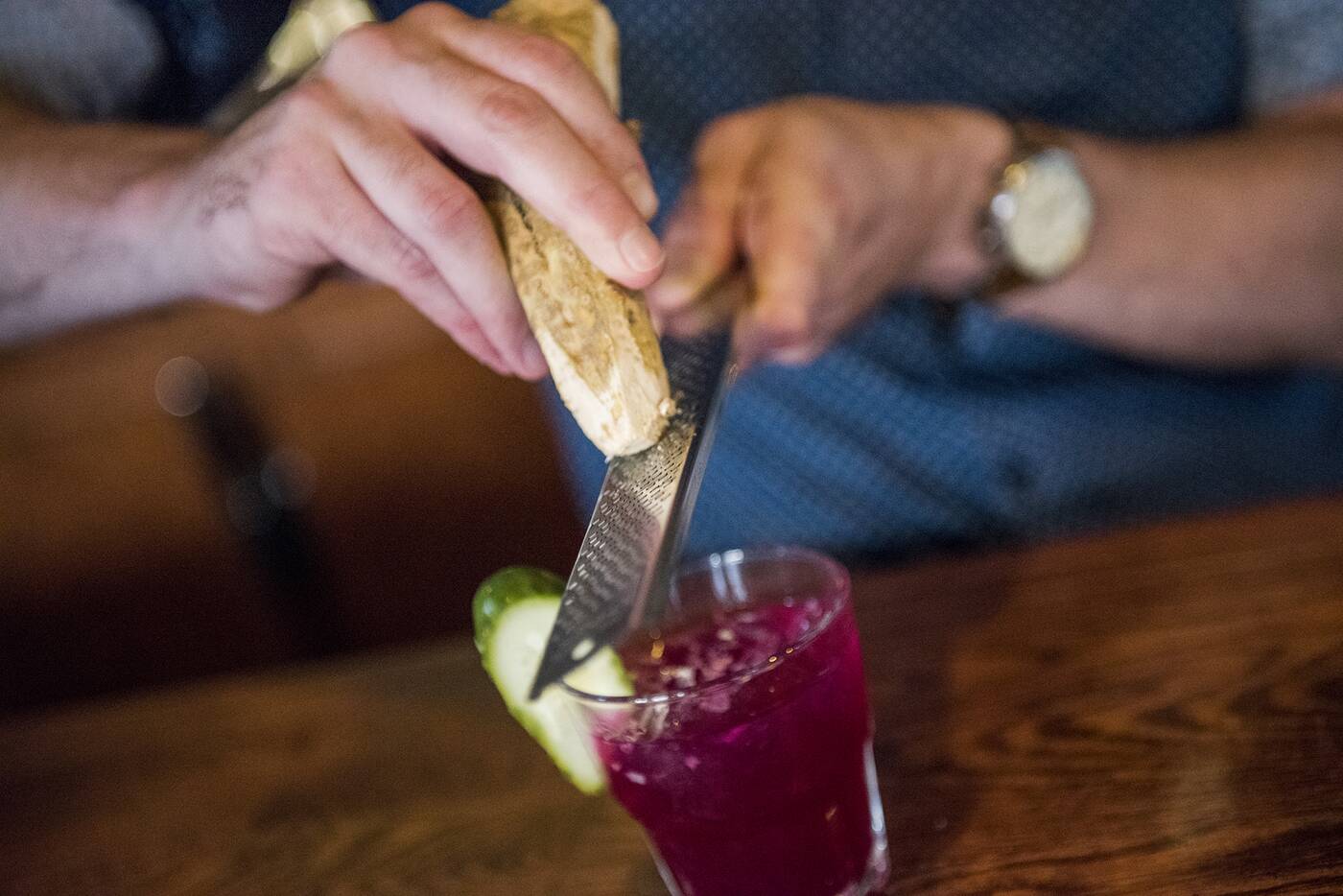 The Bloody Revolution ($10) is here to say “Forget about Mary, down with Caesar” according to the menu. 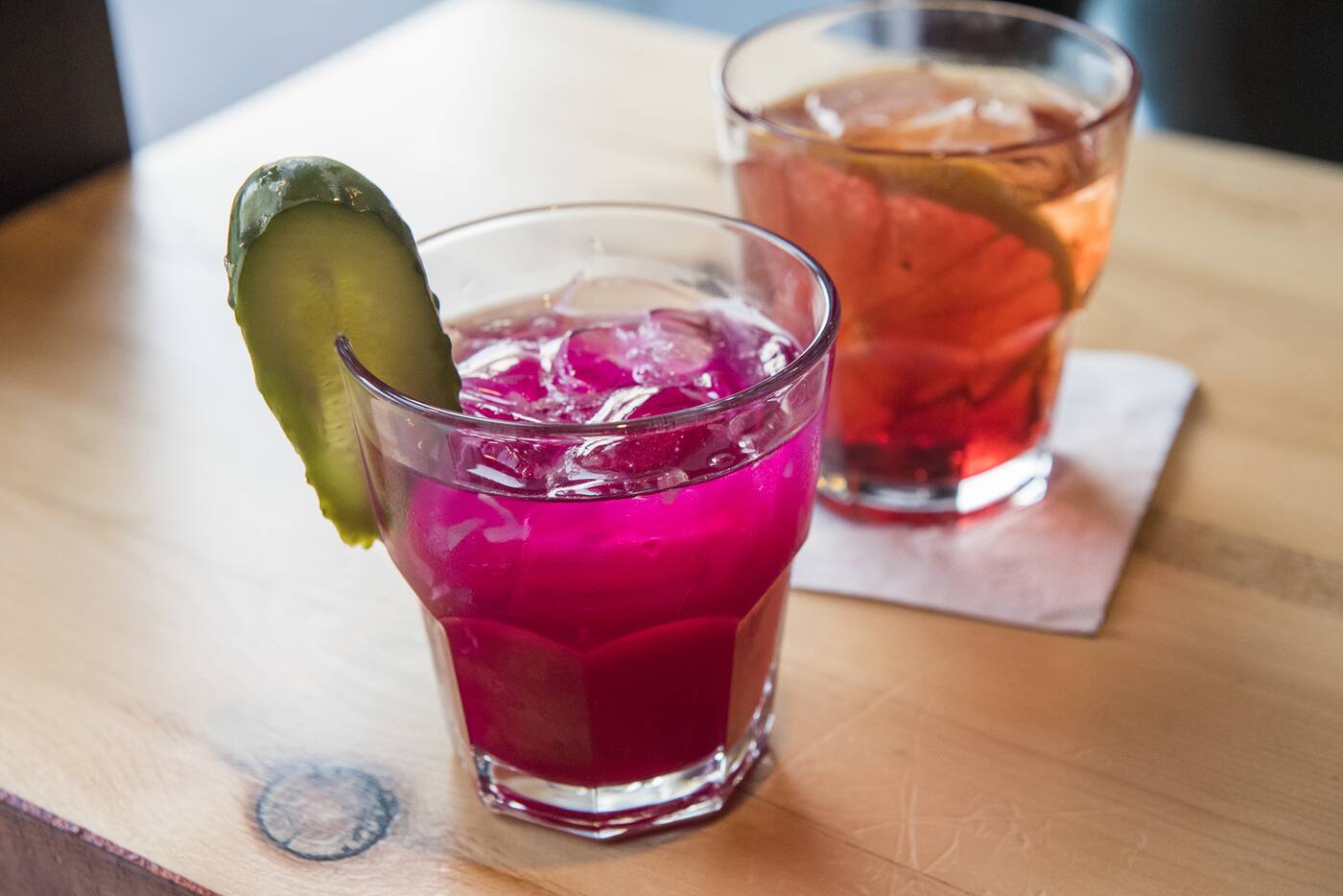 Extremely garlicky house beet kwas serves as a potent substitute for the usual tomato juice, combined with vodka and generous shavings of hot horseradish and garnished with a pickle slice. 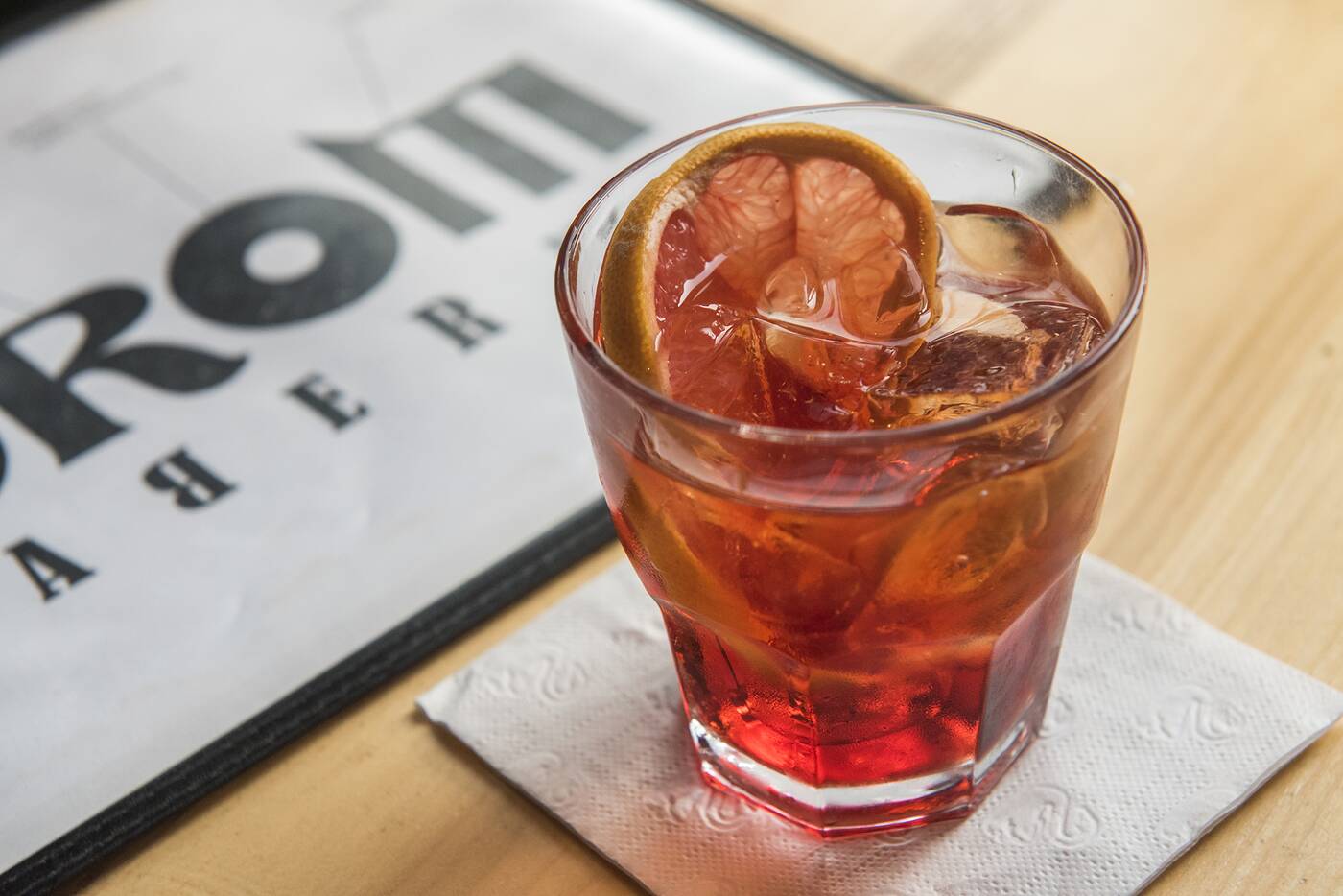 A Balkanizer ($12) puts a similar Eastern European twist on a negroni, subbing in slivovitz for gin and adding typical Campari and Amaro Montenegro. 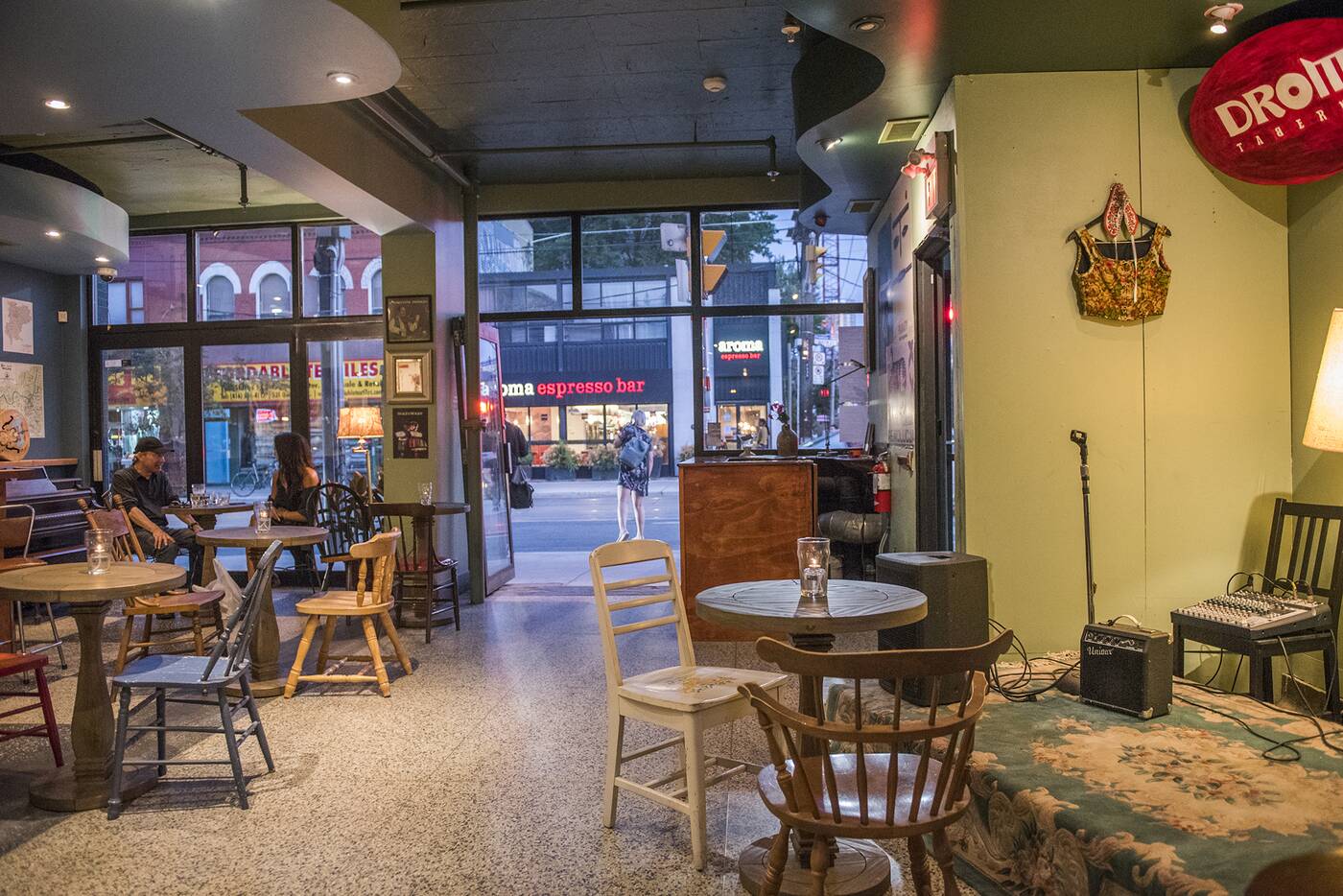 Drom Taberna is run by Shamez Amlani, who operates La Palette just down the street and is one of the original organizers of Kensington Market’s Pedestrian Sundays. 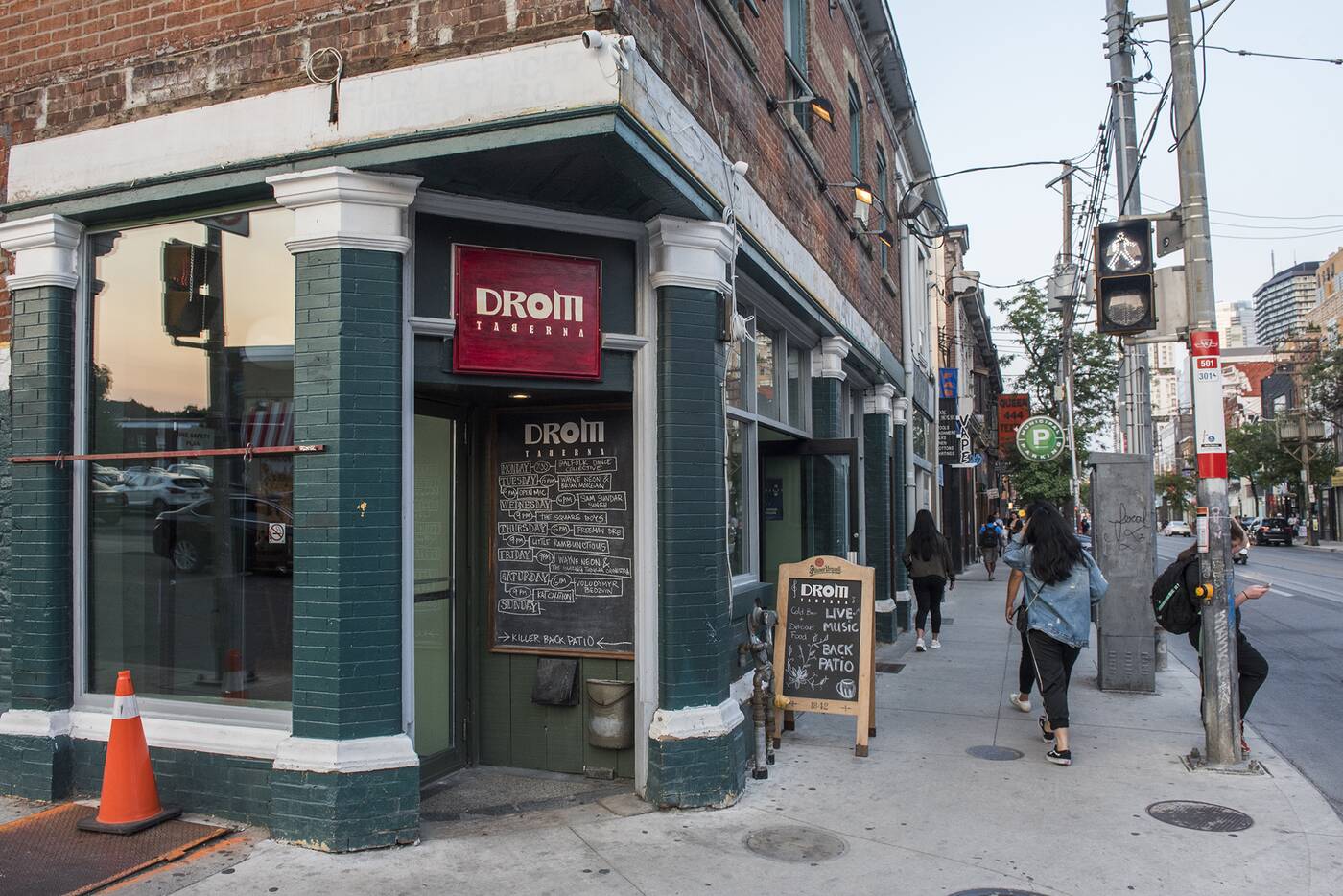