La Palette is one of Toronto’s best French restaurants, with a reputation for serving great steak frites, prix fixe menus, and, notoriously, horse until late.

Intended to bring a little piece of Paris to Toronto, the name is actually copped from owner Shamez Amlani’s favourite bar in Paris where he used to hang out on his travels there in the early 90s. 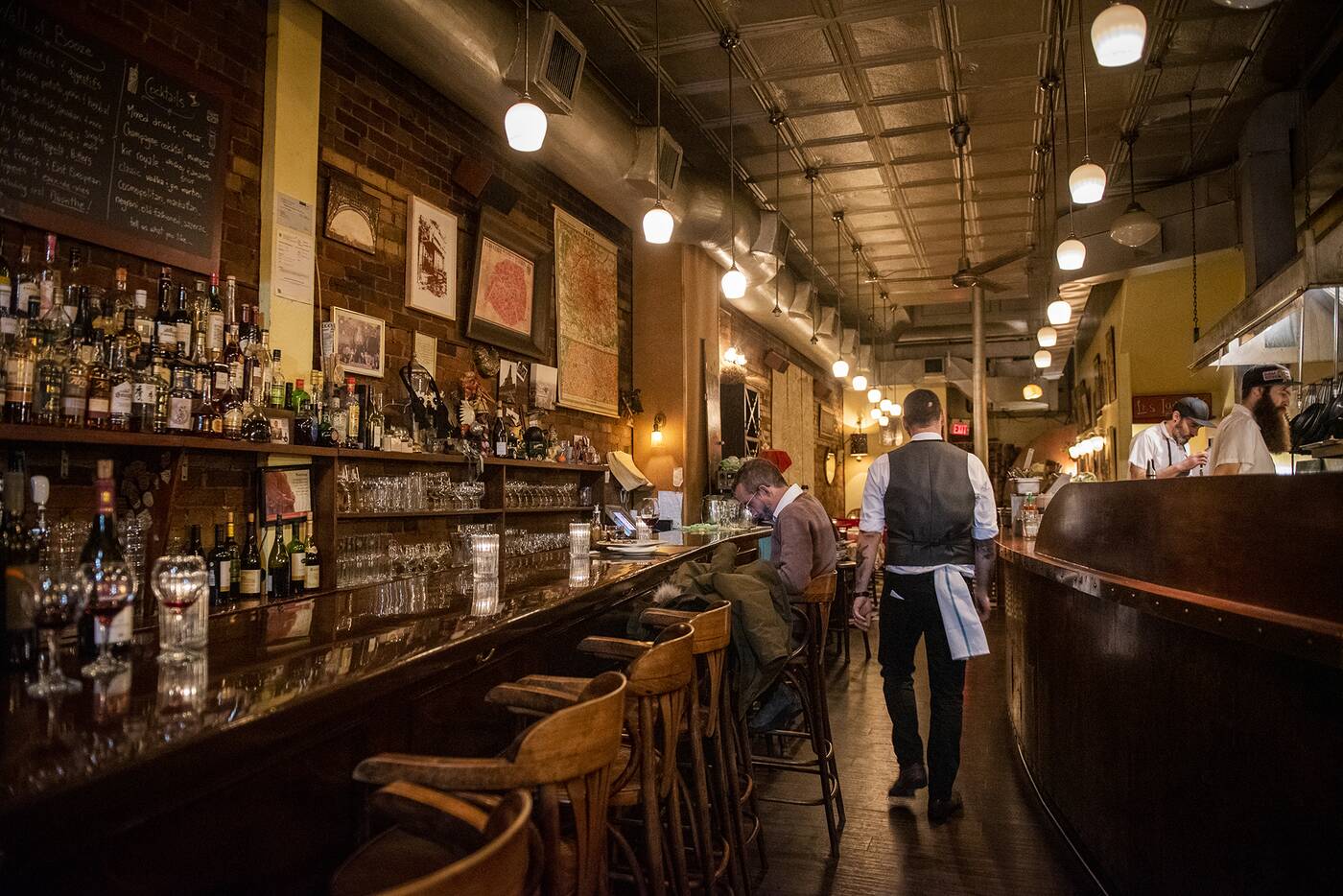 The place was also supposed to be originally located in Baldwin Village, near OCAD (hence, palette). Its first location actually ended up being where Otto’s Berlin Doner now lies, from 2000 to 2010. 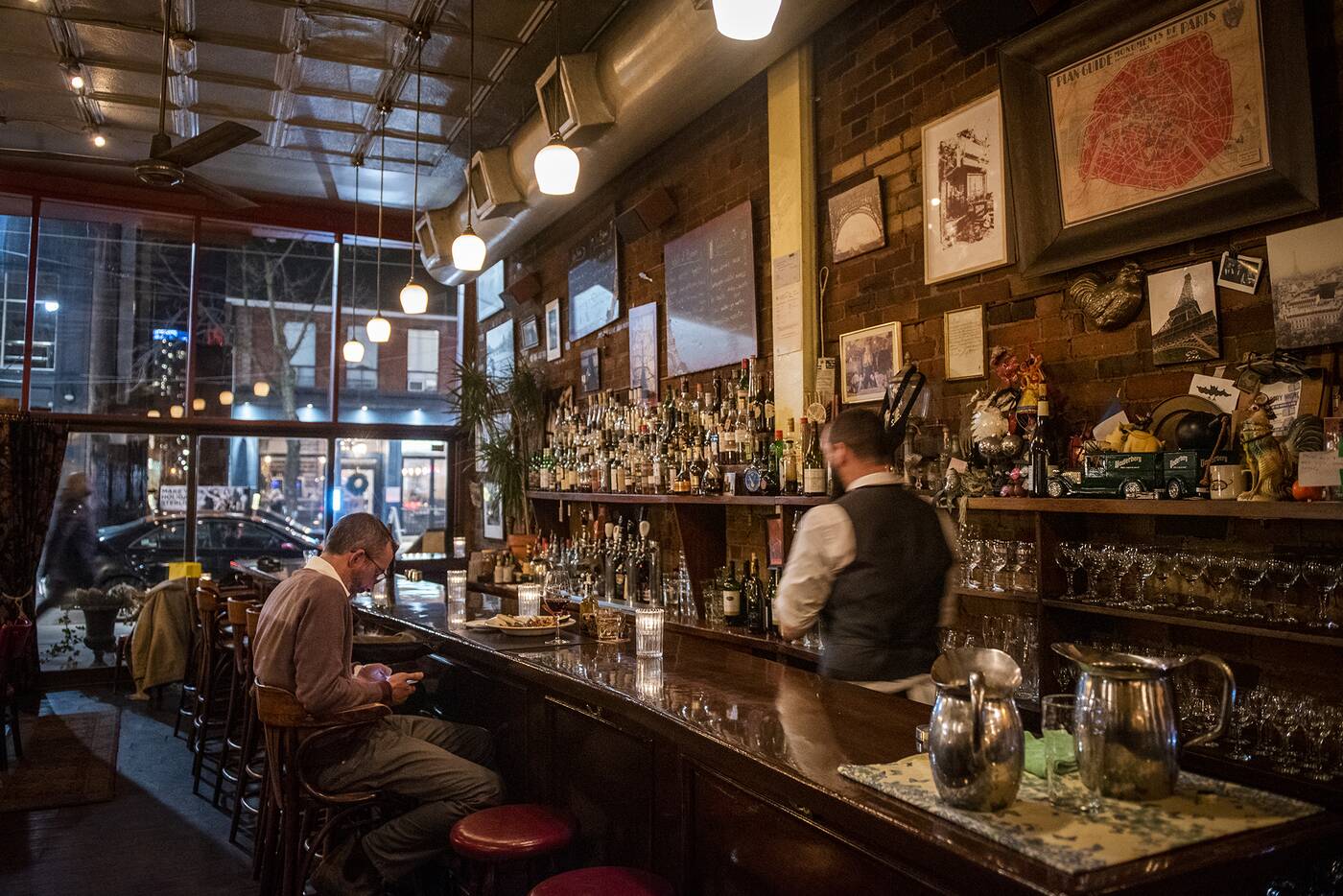 Now the restaurant has its home in this high-ceilinged space that, funnily enough, started out as stables in 1885. 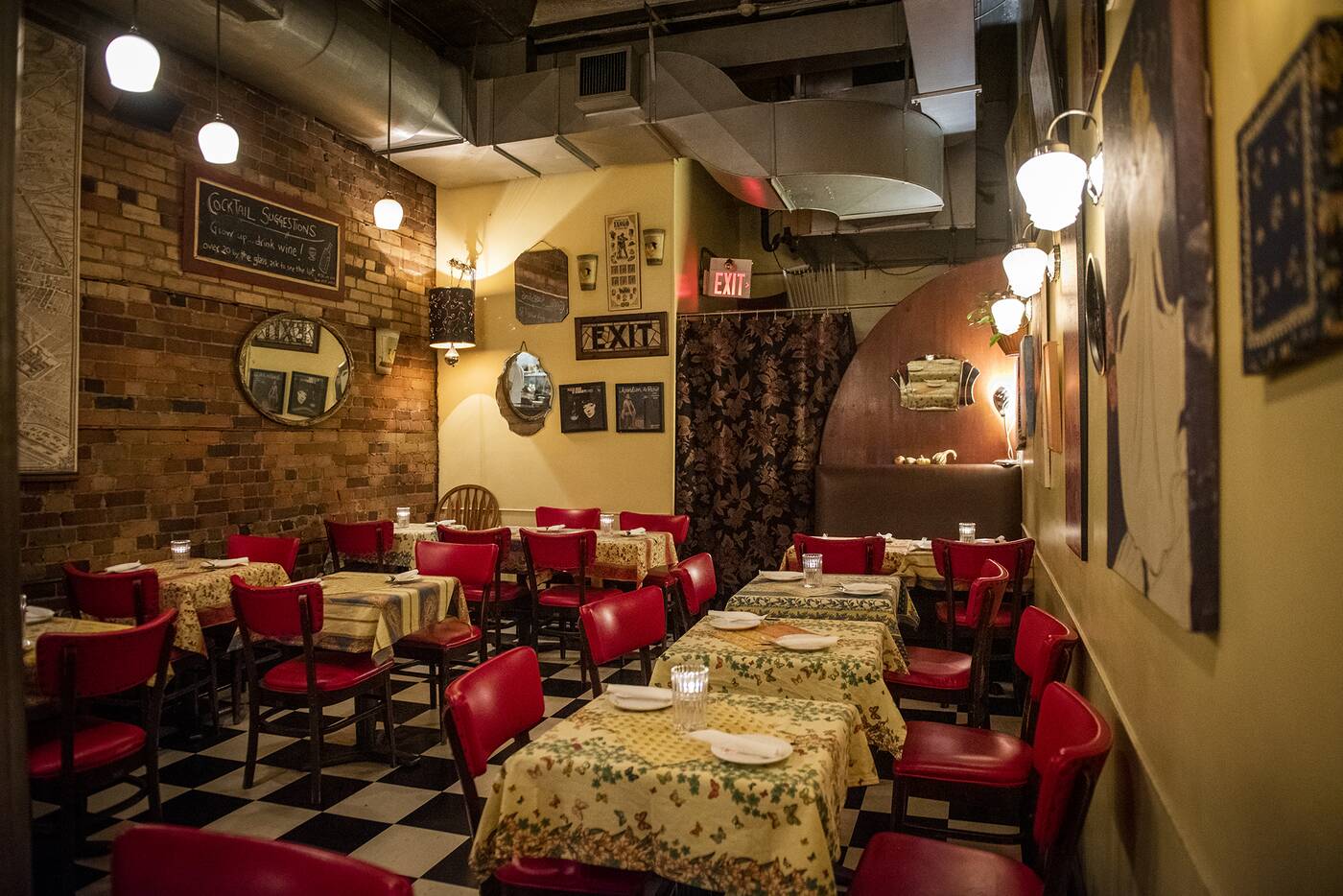 The space was home to Taro Grill before La Palette moved in, using the original bartop from the Kensington space for perfect people-watching window seats and plastering the walls with memorabilia and old personal photos. 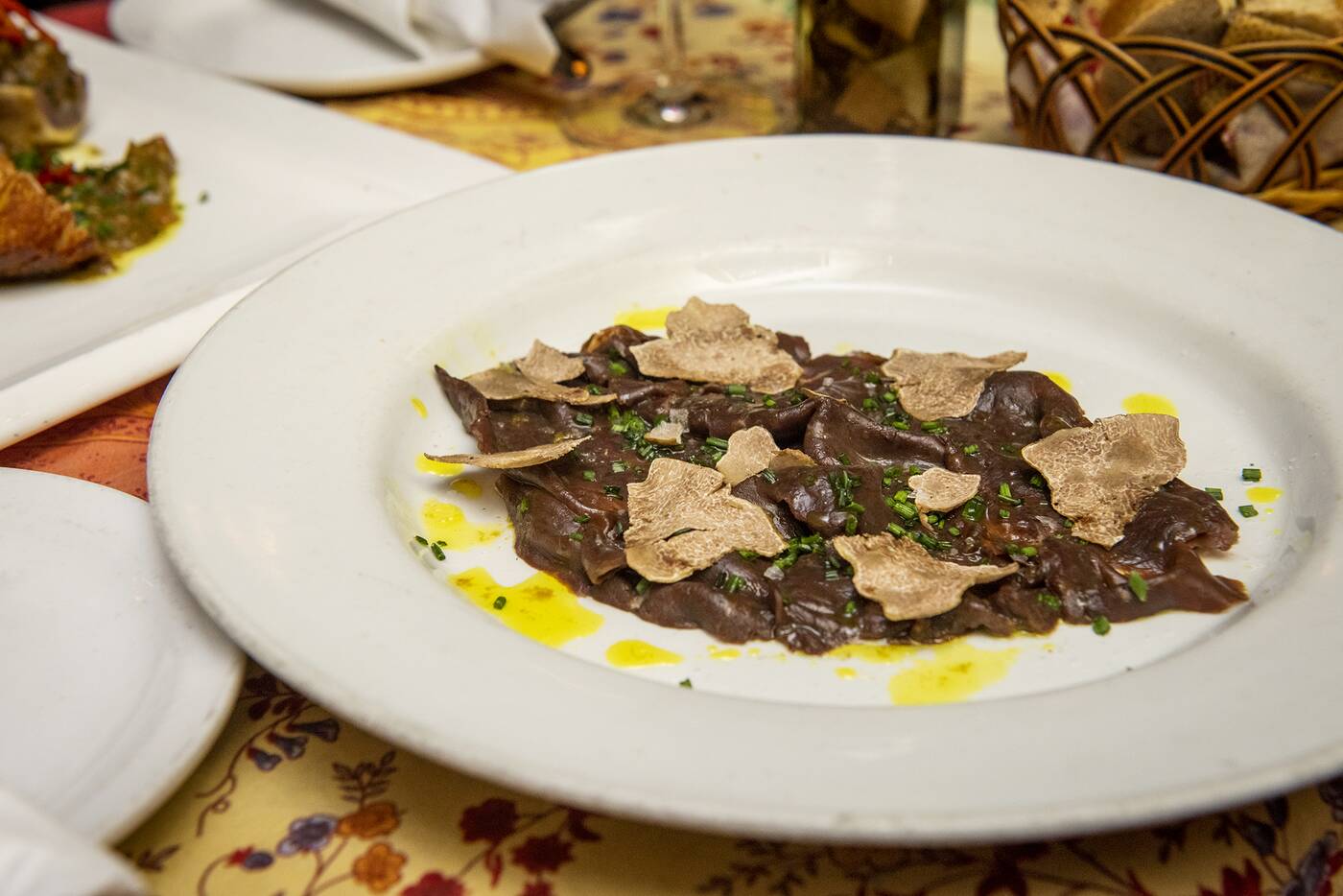 Lucky for us, a raw horse heart carpaccio ($30) is on special tonight. Sliced ultra-thin and vacuum packed, it almost has the texture of a cured ham or fish, with a flavour similar to a bold salami. It’s accented simply but decadently with lusciously good oil, chives, salt and Italian white truffle. 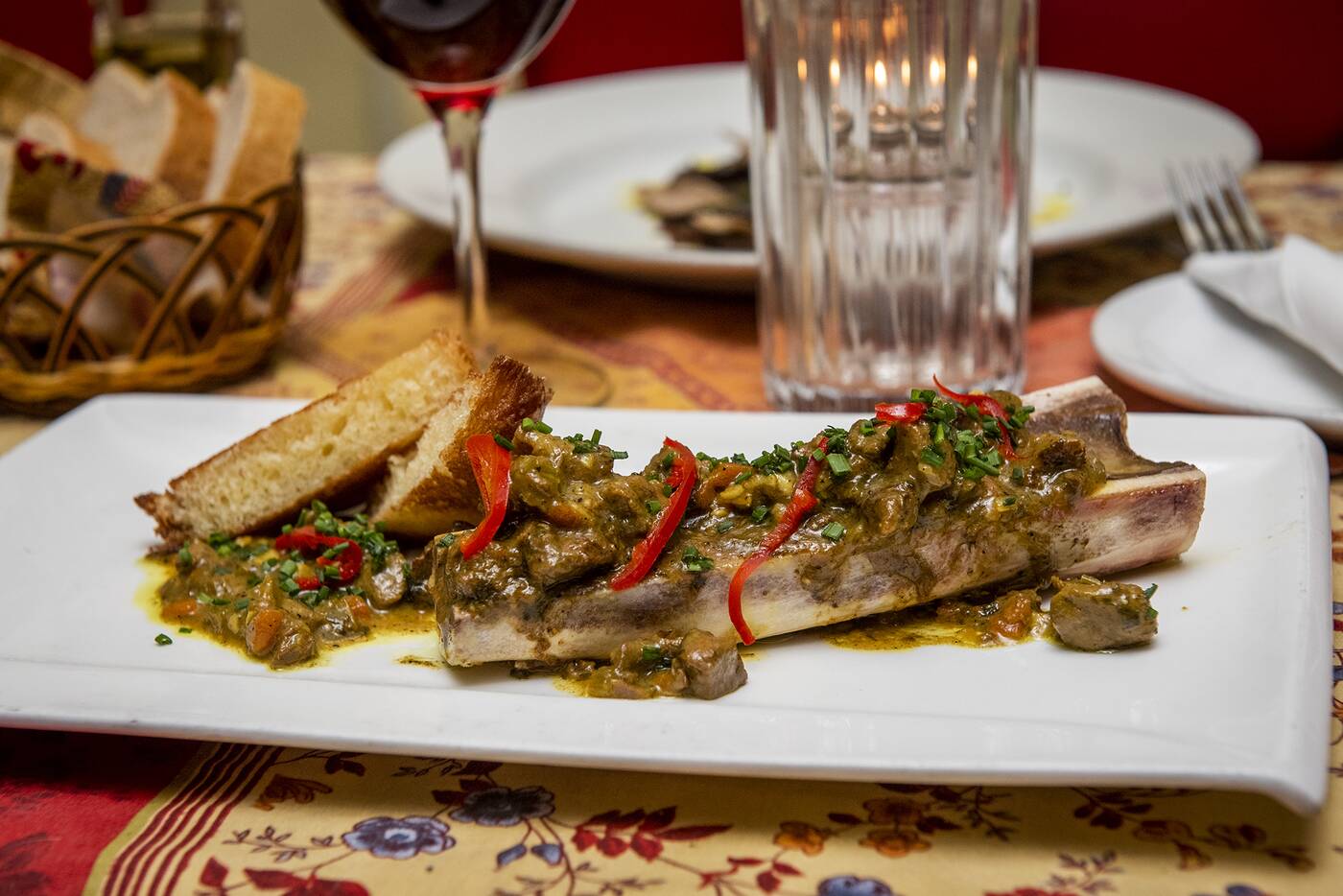 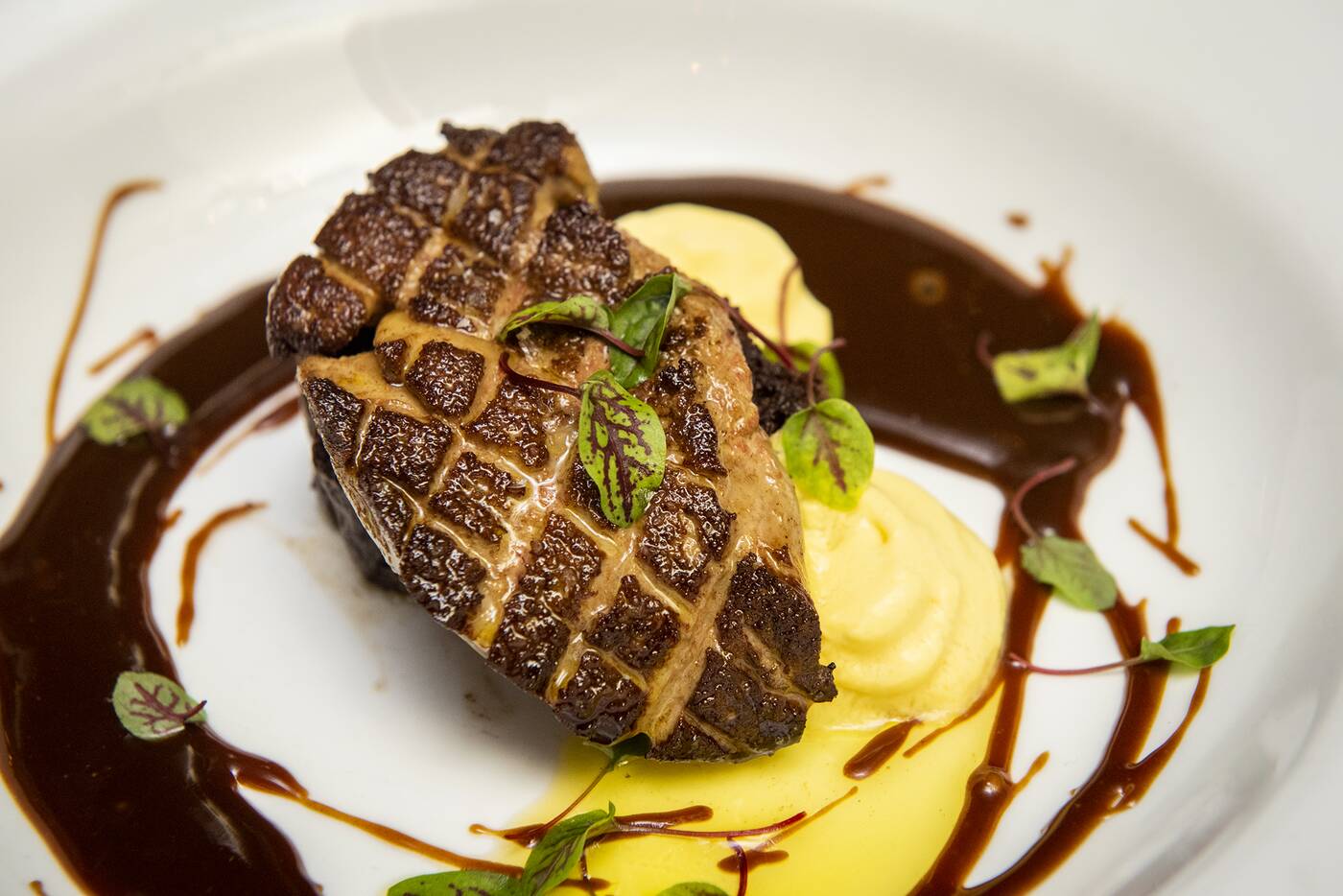 Foie gras ($25) has a sweet flavour profile, pan-seared with exemplary knife cuts, served atop a cocoa brioche huddled next to piles of a creamy, bright passionfruit substance and ringed by a caramelized white chocolate drizzle. 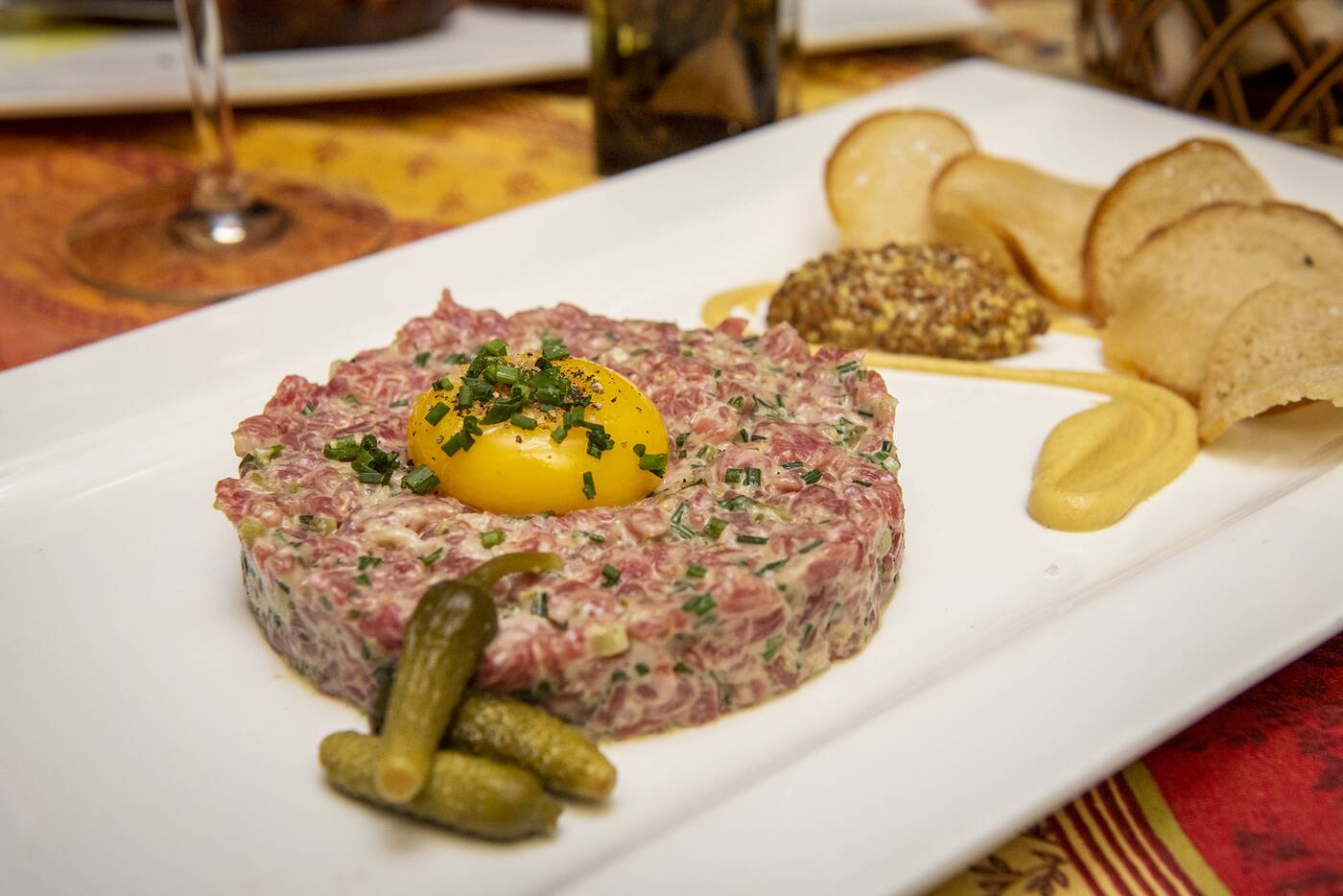 Beef tartare is $17 as an app, a classically presented puck of dressed raw beef with a raw egg yolk and herbs on top, grainy and Dijon mustards on the side for mixing in and curvy crisps for scooping. 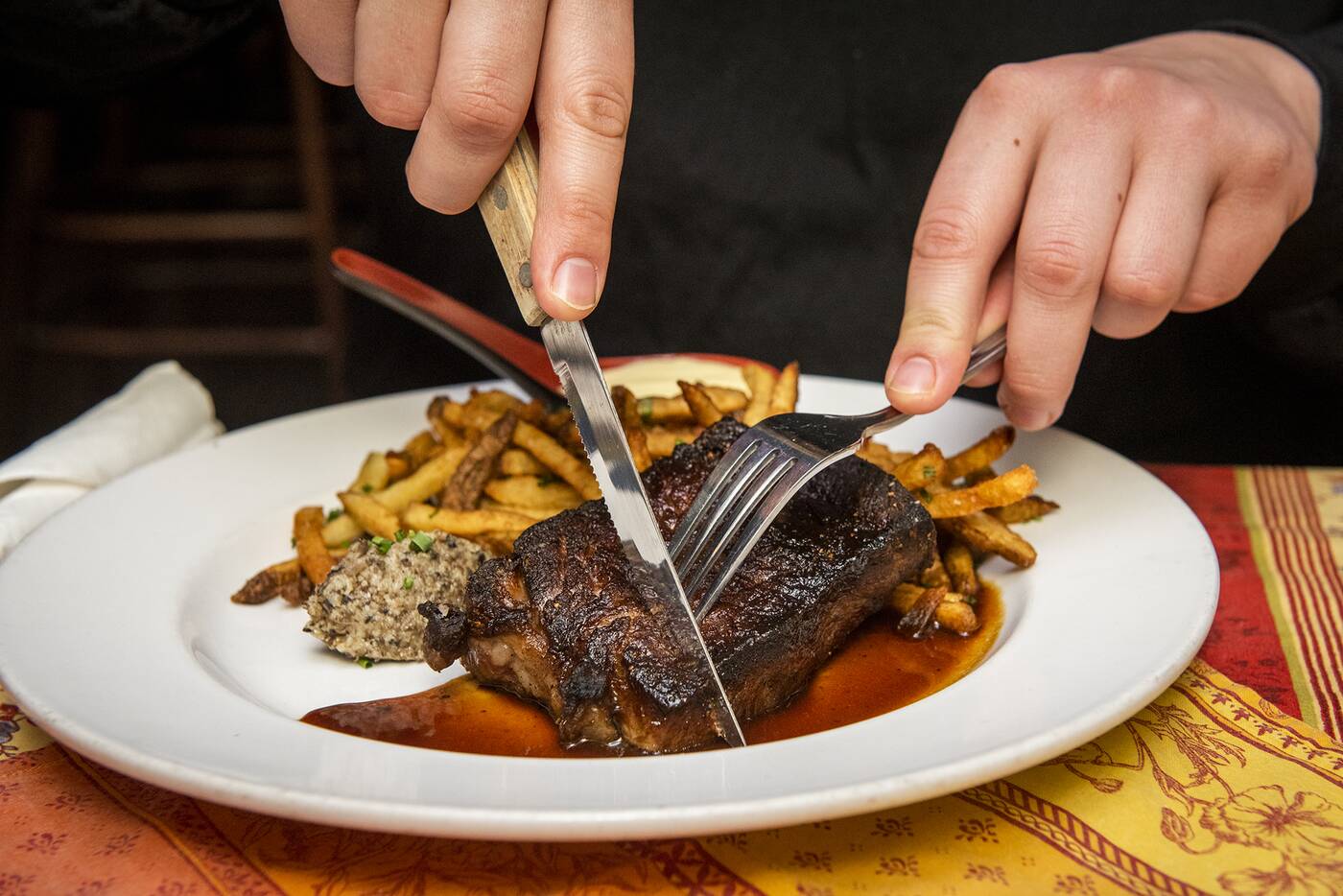 Steak frites are $35 for an 8-ounce portion, Alberta Canadian Prime striploin that’s bloody on the inside, golden brown and crunchy on the outside. Accompanied by crispy, perfectly seasoned Yukon Gold potatoes, house mayo, and seasonal mushroom and beef tallow compound butter, everything sits in a pool of deeply flavourful demi-glace. 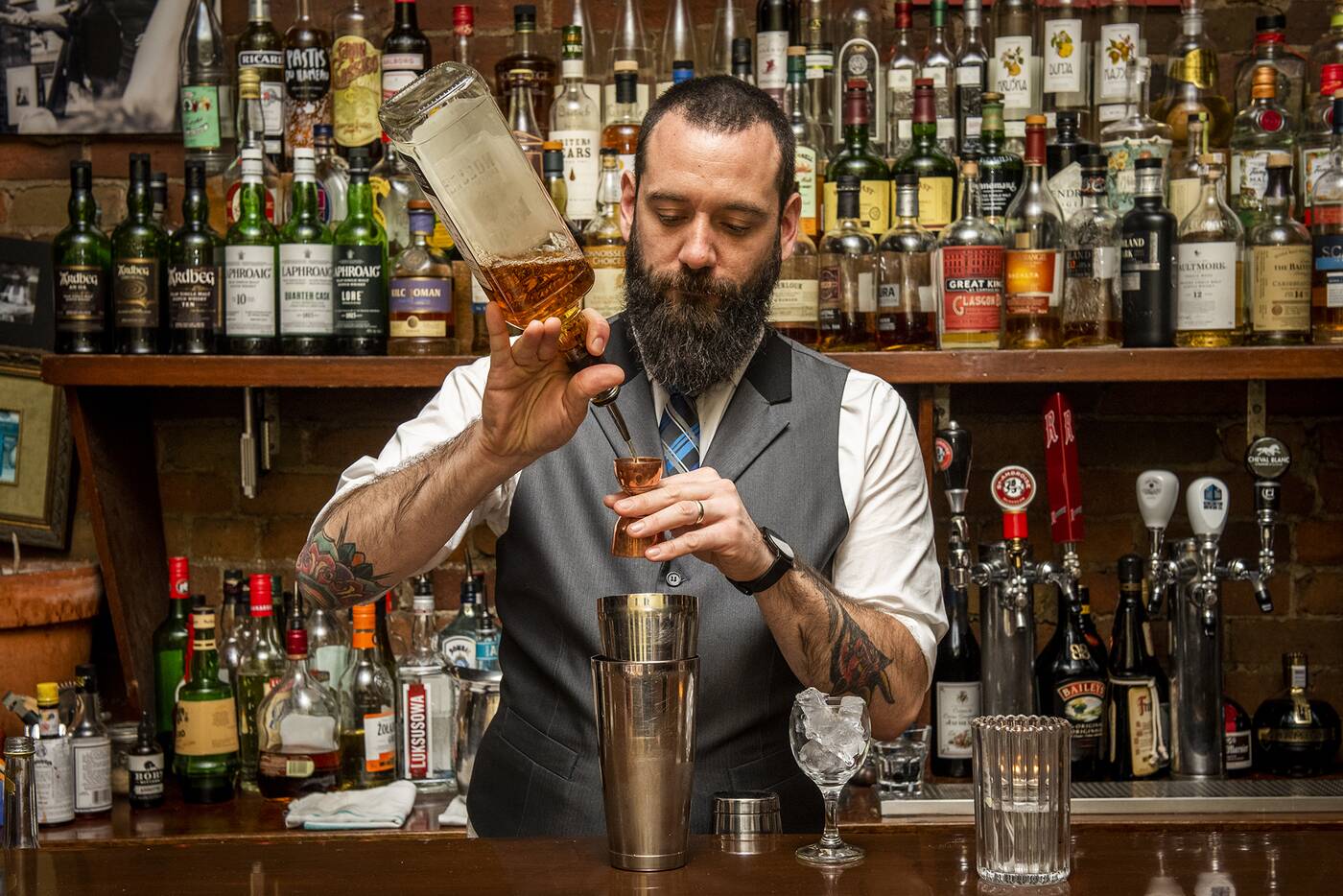 Though this is more of a saloon affair where a quick chat with the bartender wins out over a formal cocktail menu, La Palette does boast a “Wall of Booze” with over 150 bottles. 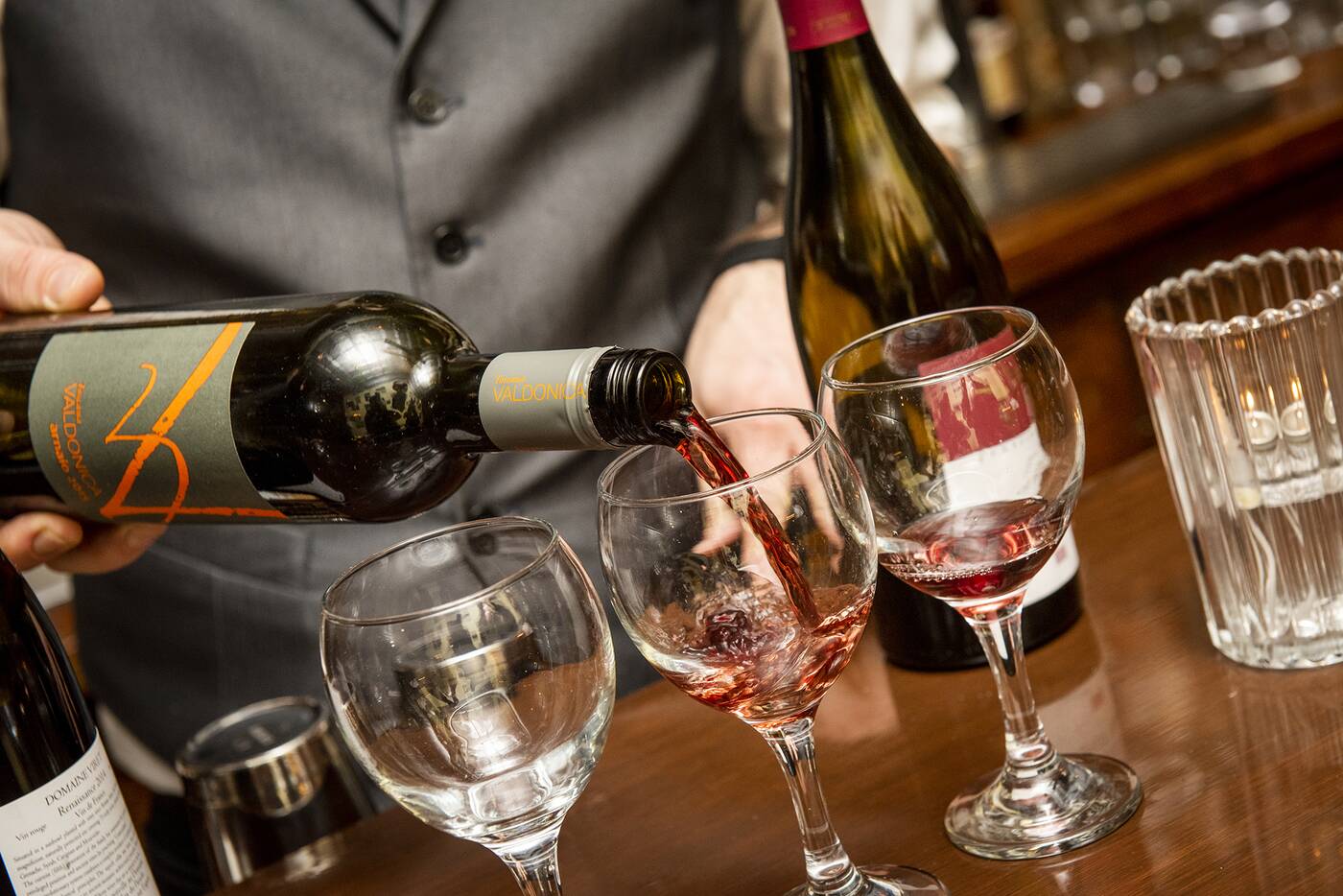 Off-the-beaten-path, biodynamic wines are a specialty though there is strong French representation, something like an easy-drinking Pfeffingen German pinot noir going for $18 a glass (don’t worry, house is $9). 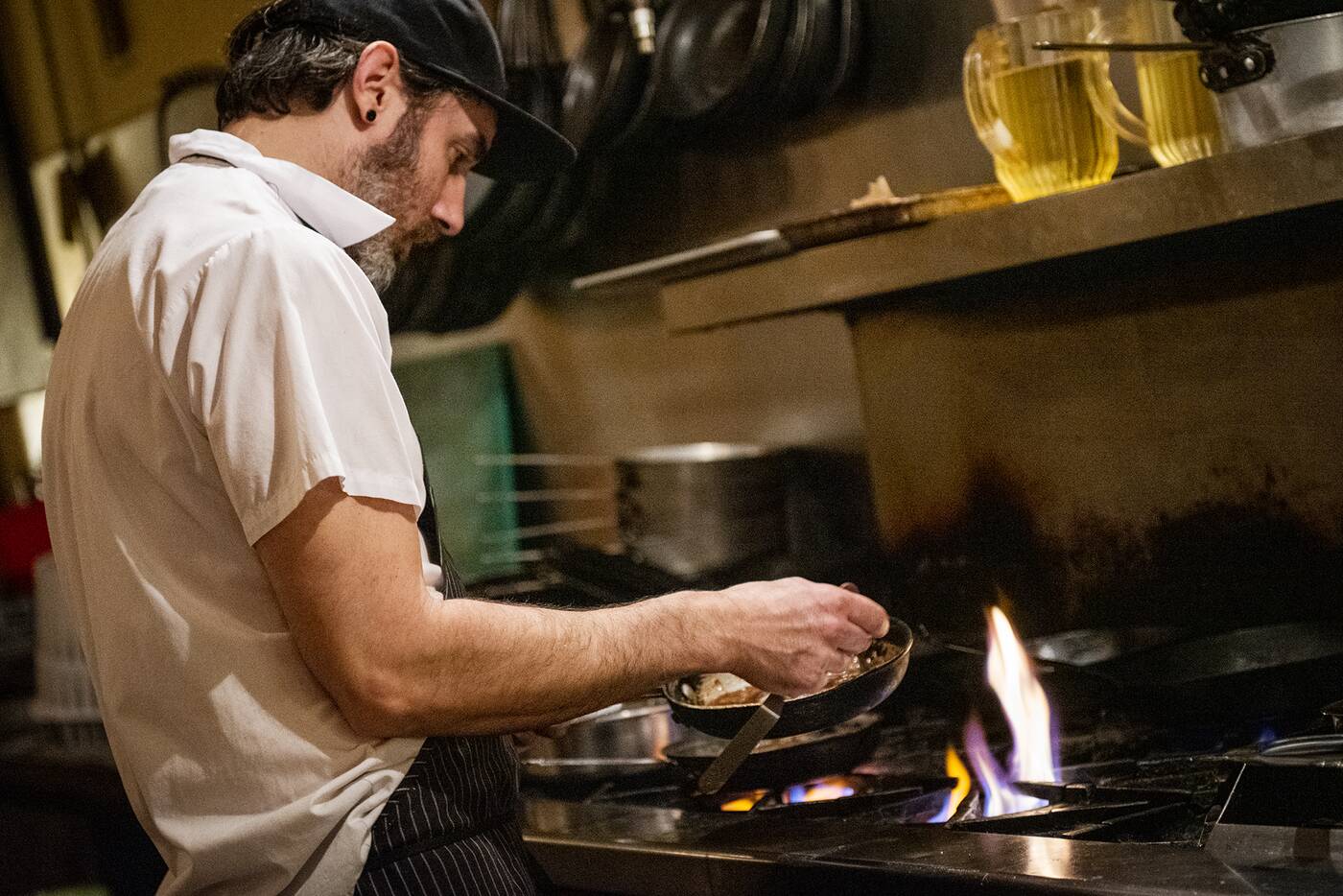 An open kitchen fills the space with lively banter, and once a month at midnight a band like Lemon Bucket Orchestra or A Little Rambunctious strikes up standing on the bar. 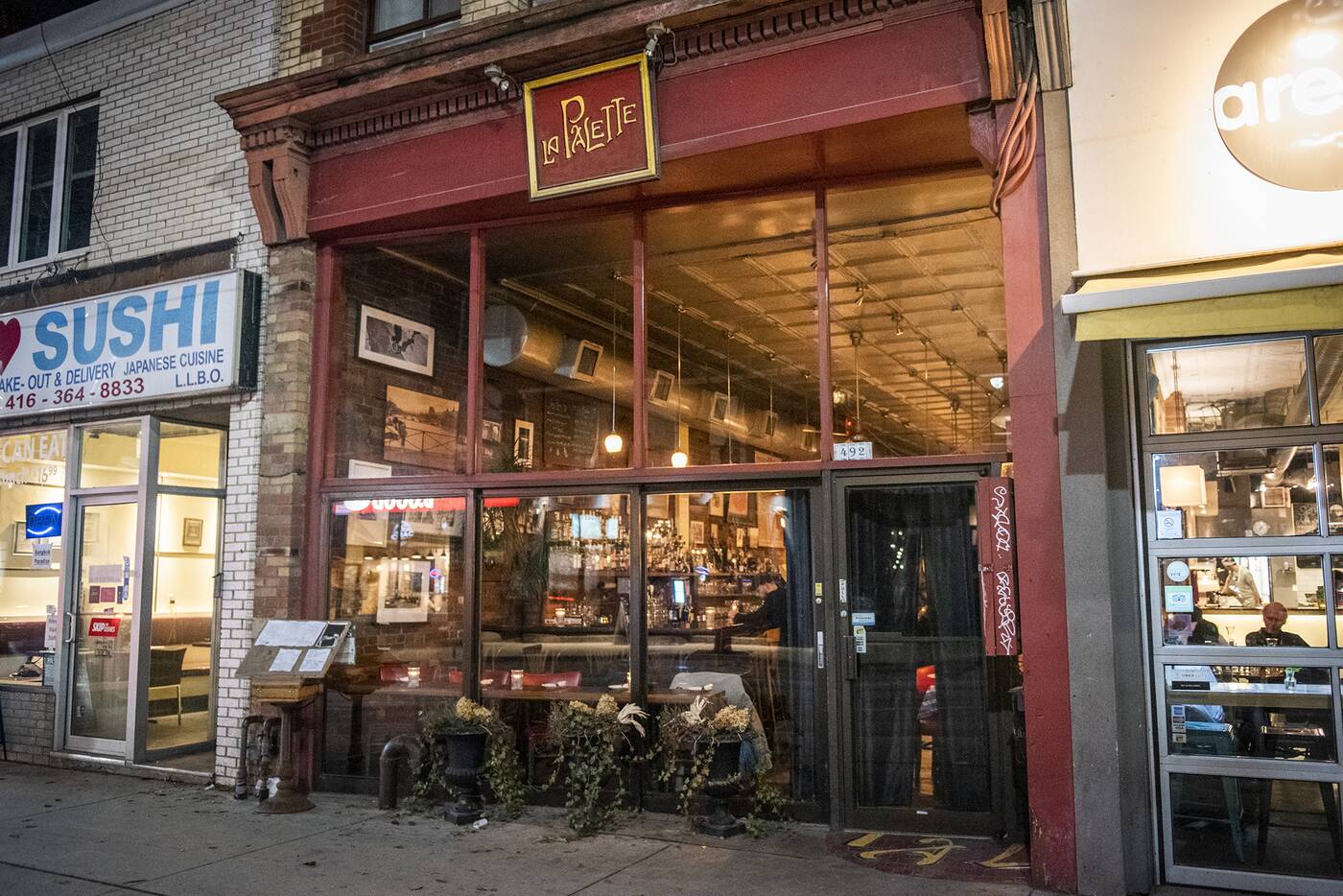