Cheers Cut does up XXL Taiwanese fried chicken stuffed with cheese and topped with spicy powder, as well as super-sized drinks and seafood dishes.

The spot is actually a transplant from Taiwan, though the chain now has locations in Singapore, China, Australia and the U.S. 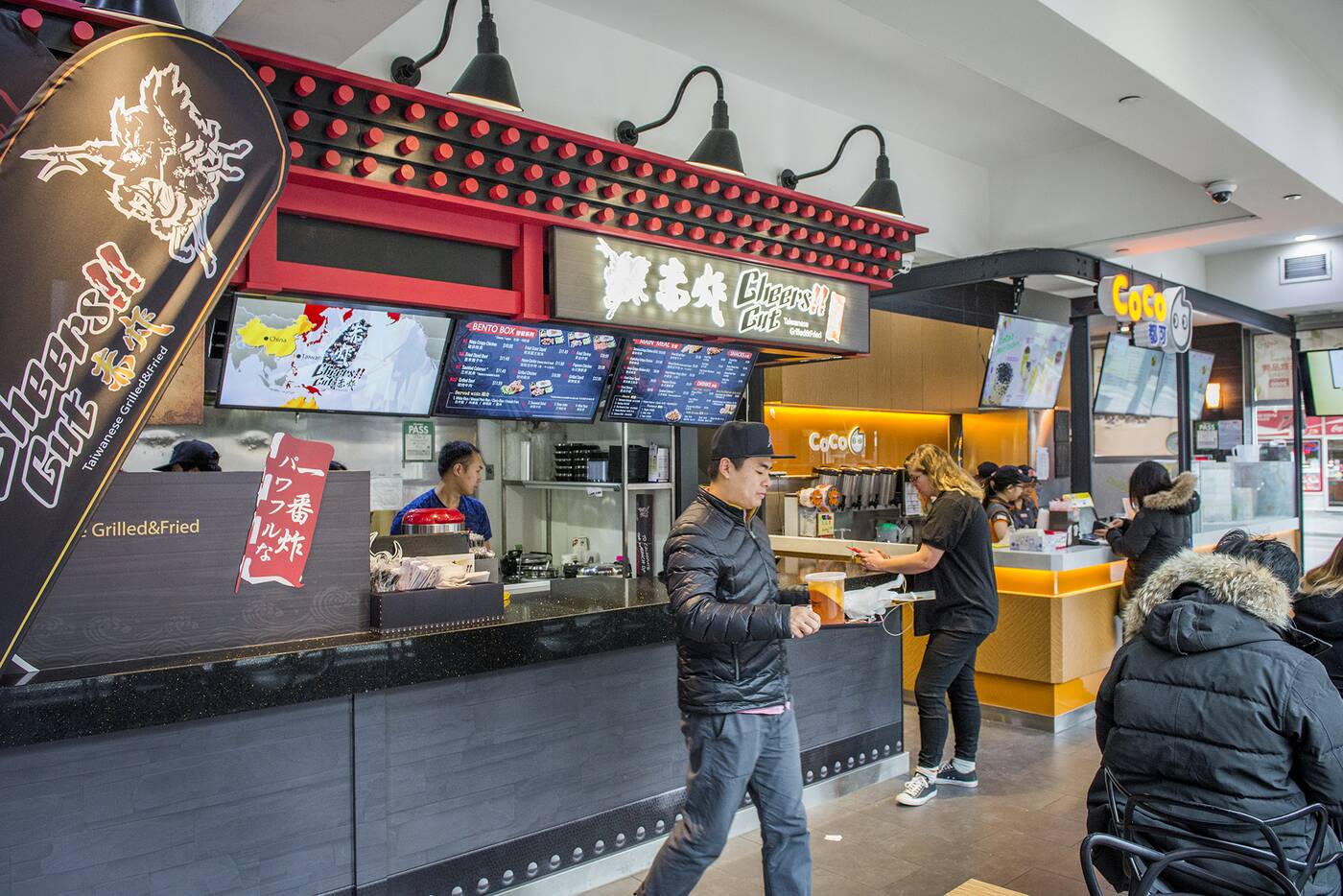 It’s located in a food hall near Yonge and Gerrard, sandwiched between other chain places like Philthy Philly’s and Thai Express. 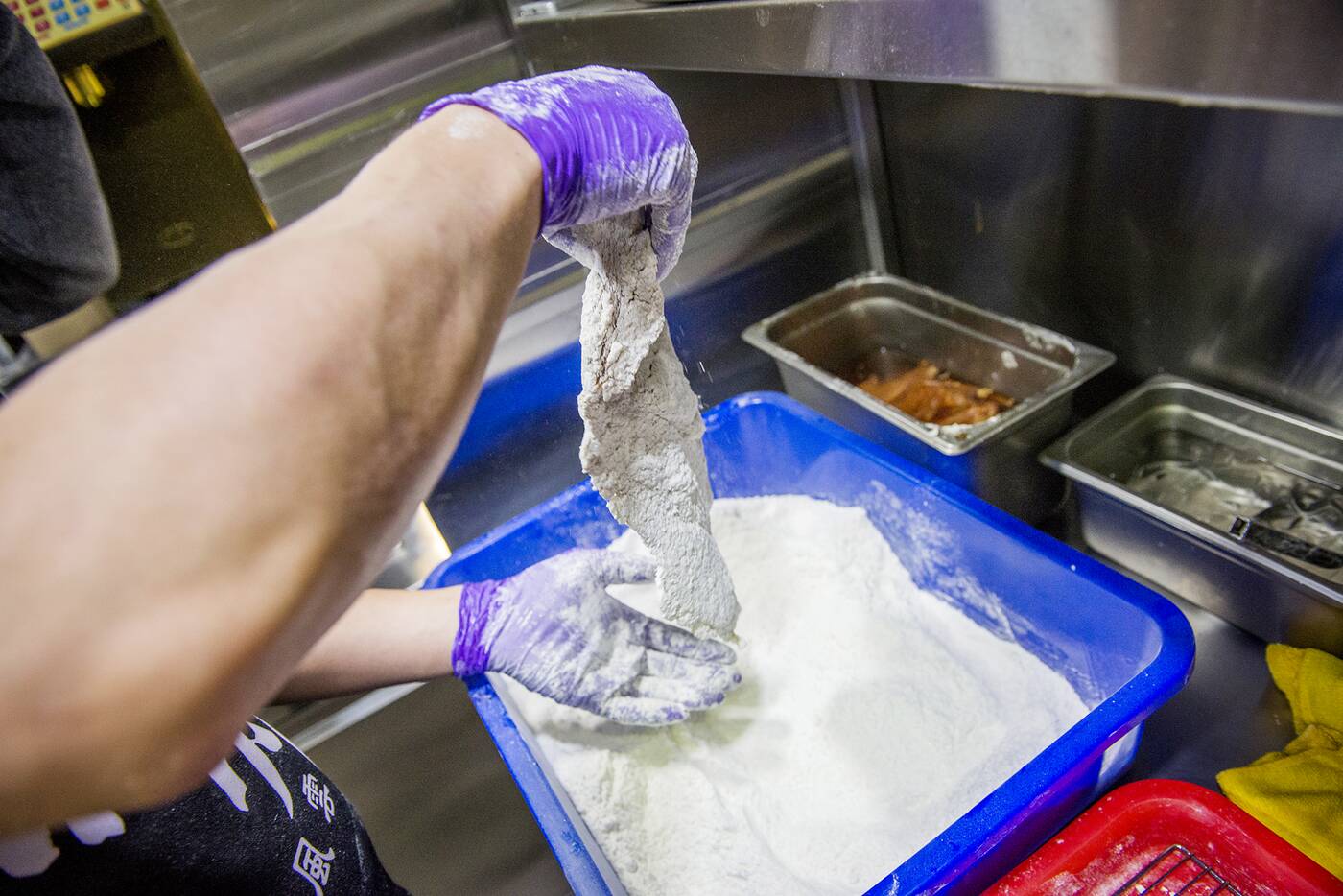 Different types of fried chicken are breaded differently here, thinner for what they call the Samurai and thicker for the Ninja. 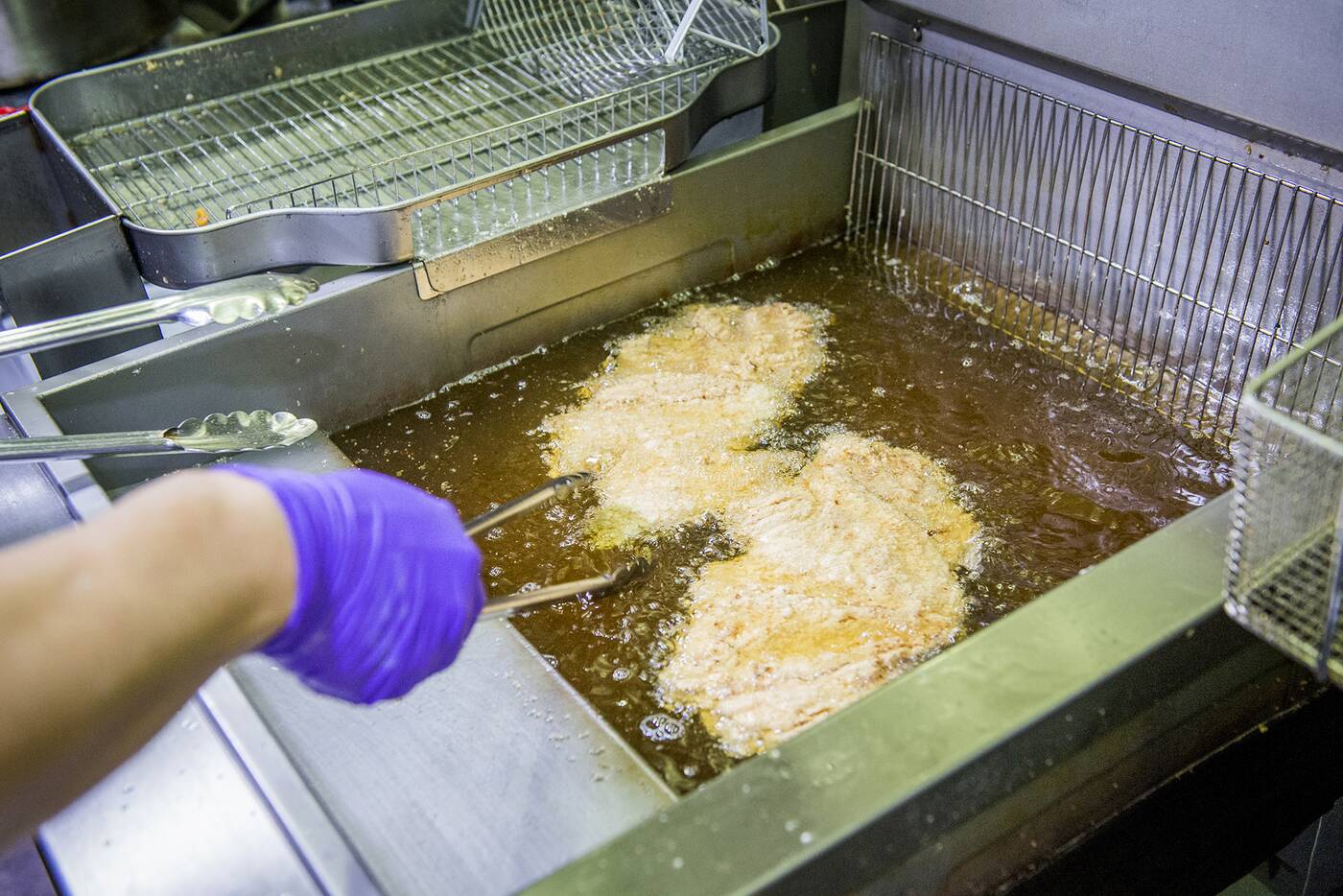 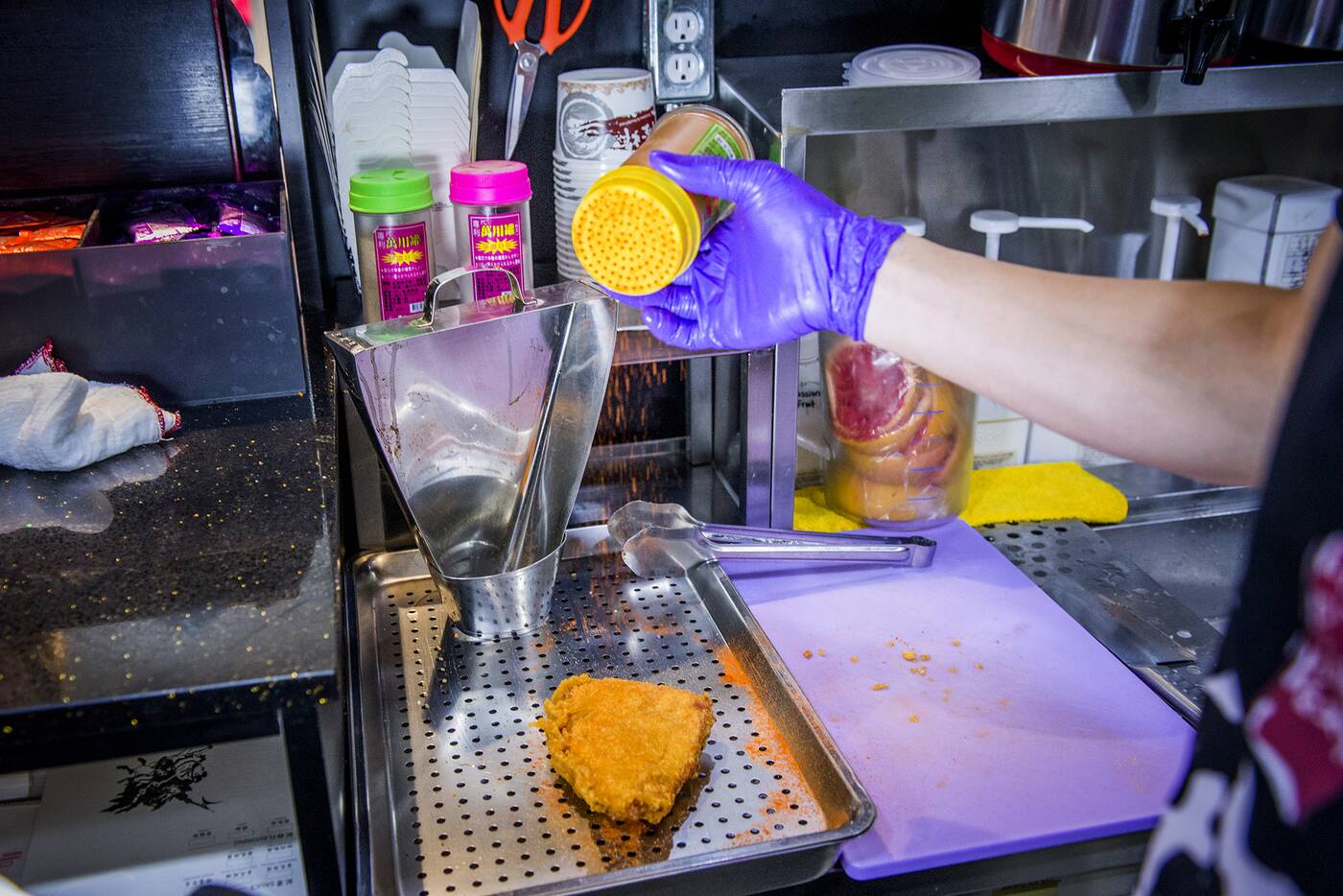 XXL translates to twelve ounces of chicken. Each piece is one half of a chicken breast given five special cuts to flatten it out with the bones still inside and marinated for at least forty-eight hours. 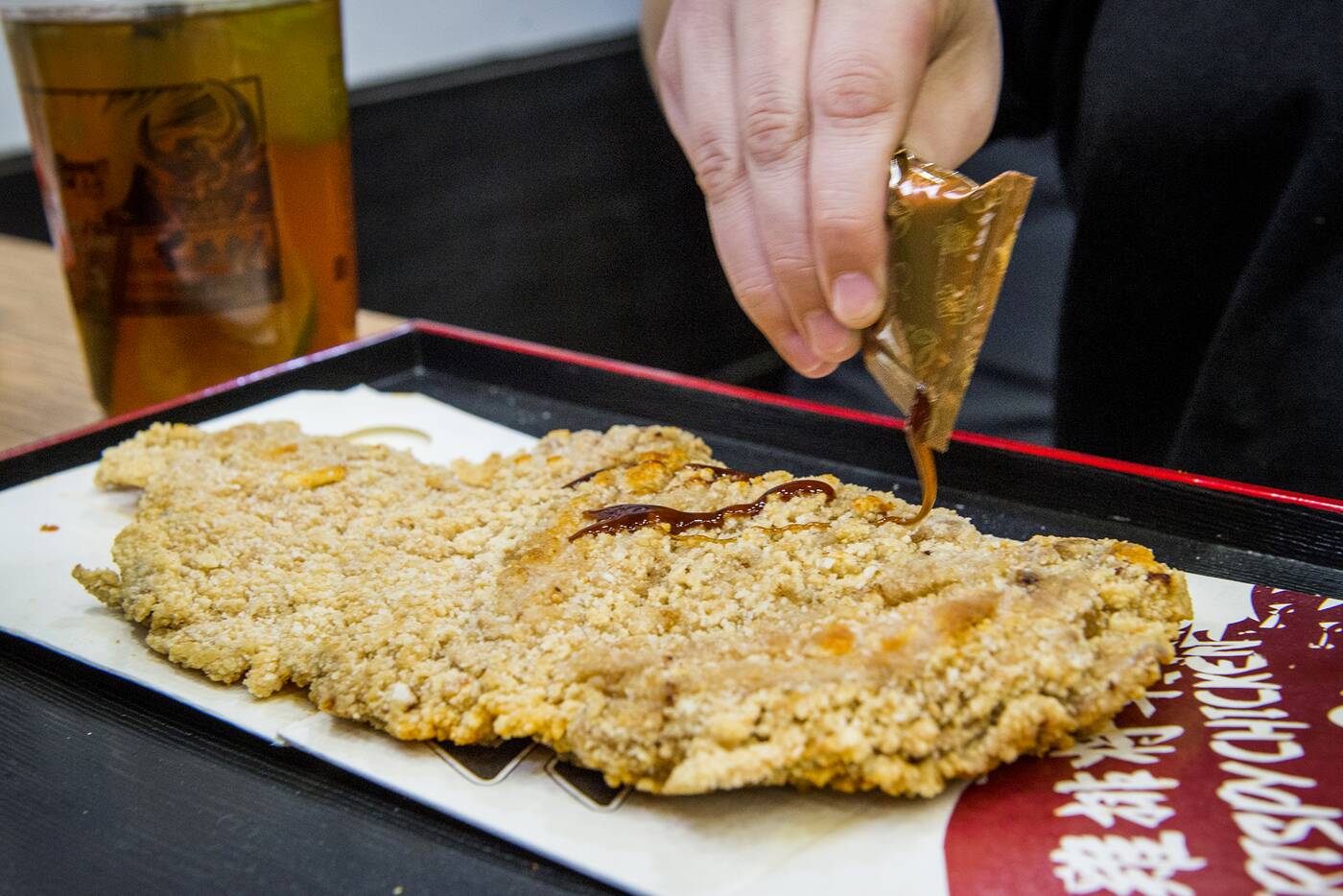 Finish off the crispy chicken with your chosen flavour (pepper, chili, plum) and packets of sauces (teriyaki, sweet and sour, honey mustard, chili). 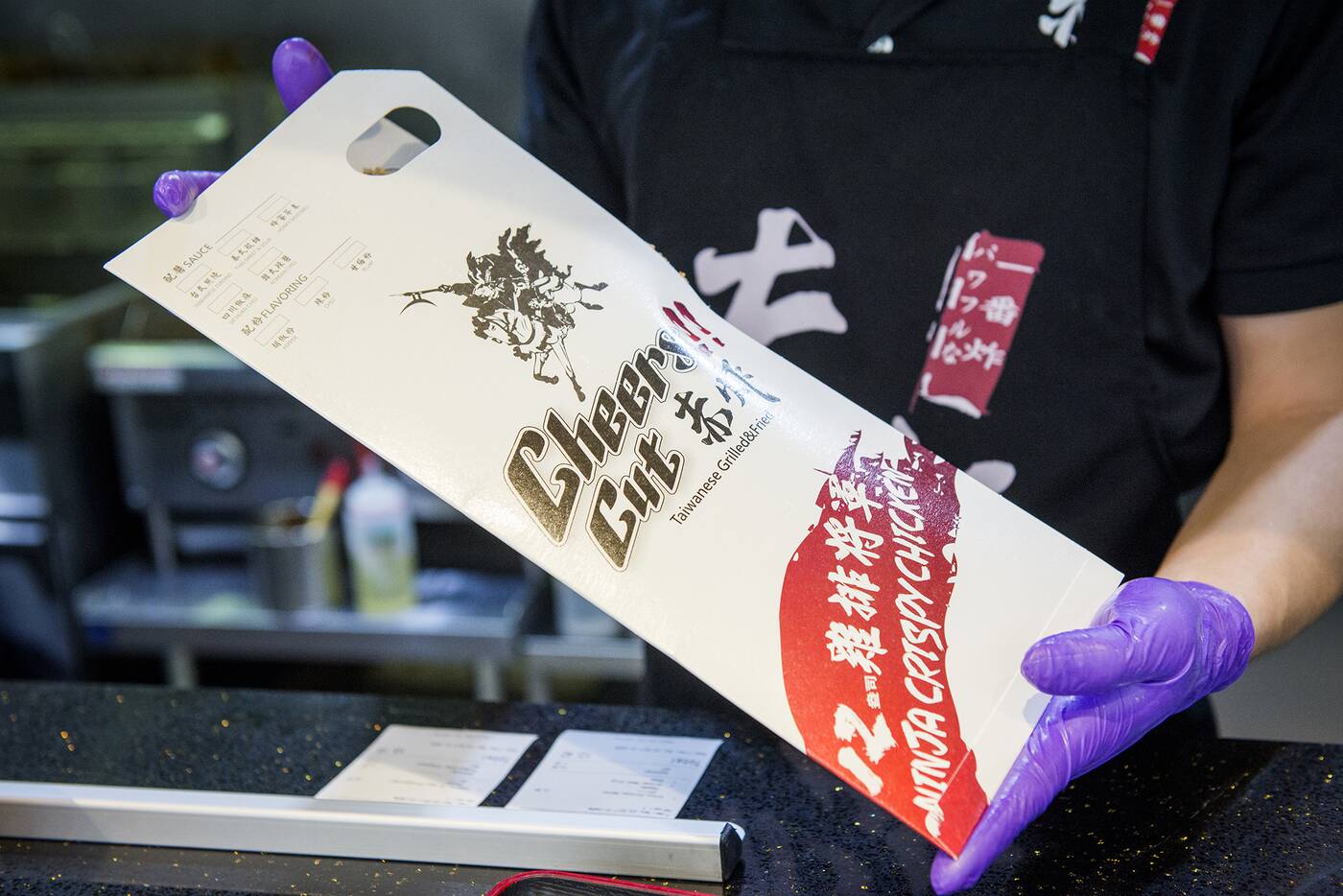 It’s served in a giant cardboard envelope that can be delightfully ripped open to create takeout packaging and a handheld wrapper all in one, but I do find that this is much more difficult to accomplish with the huge floppy piece of chicken than it appears in most Instagrams. 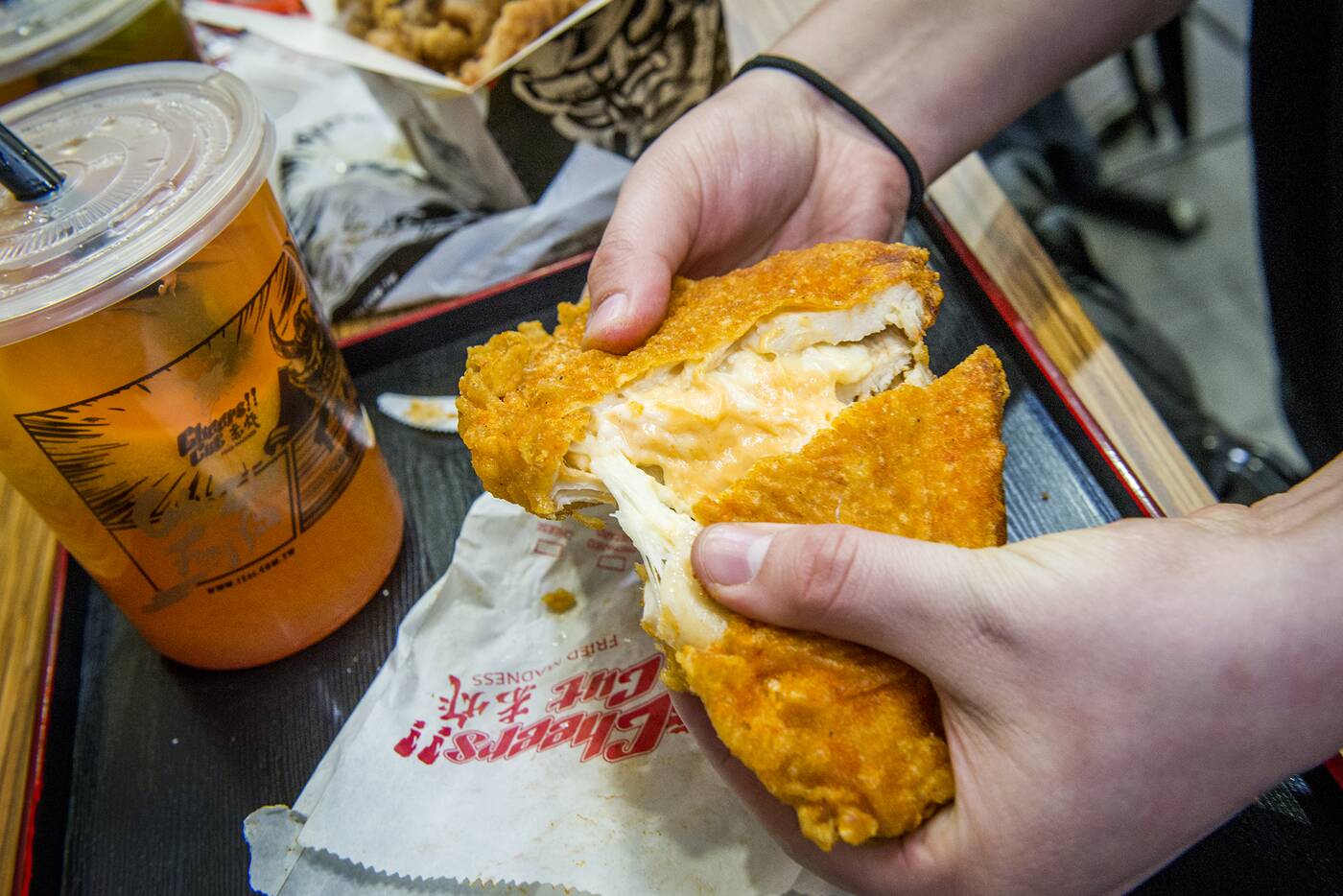 Exploding Crispy Chicken ($9.99) is stuffed with four kinds of cheese: marble, cheddar, mozzarella and cheese curds for stretch. All the chicken is extremely oily and the flavoured powders are messy, so you’ll likely want to use provided gloves. 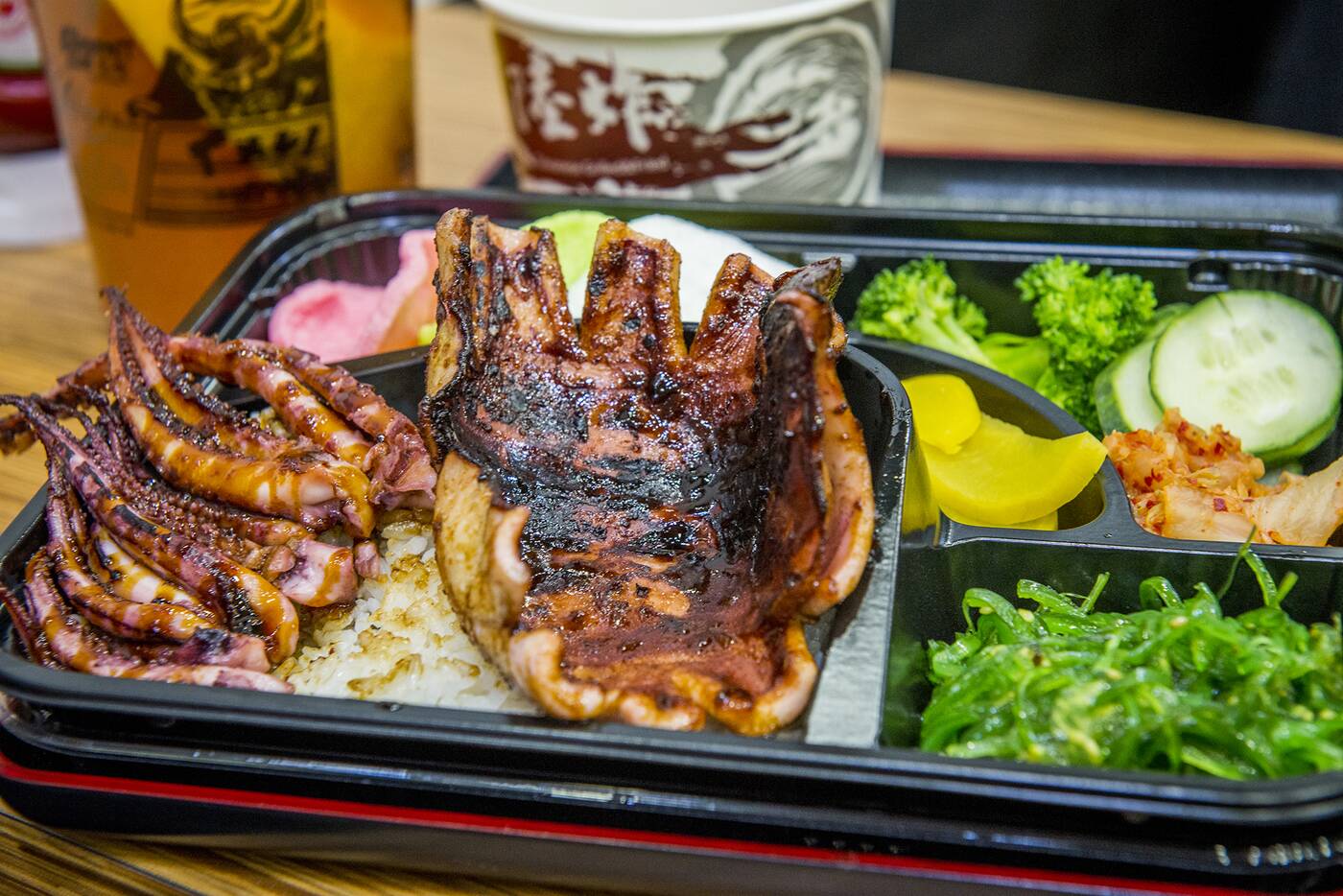 Grilled squid ($11.99) is one of several grilled or fried seafood, chicken or beef options for bento boxes: you can also get Ninja chicken in one of these. 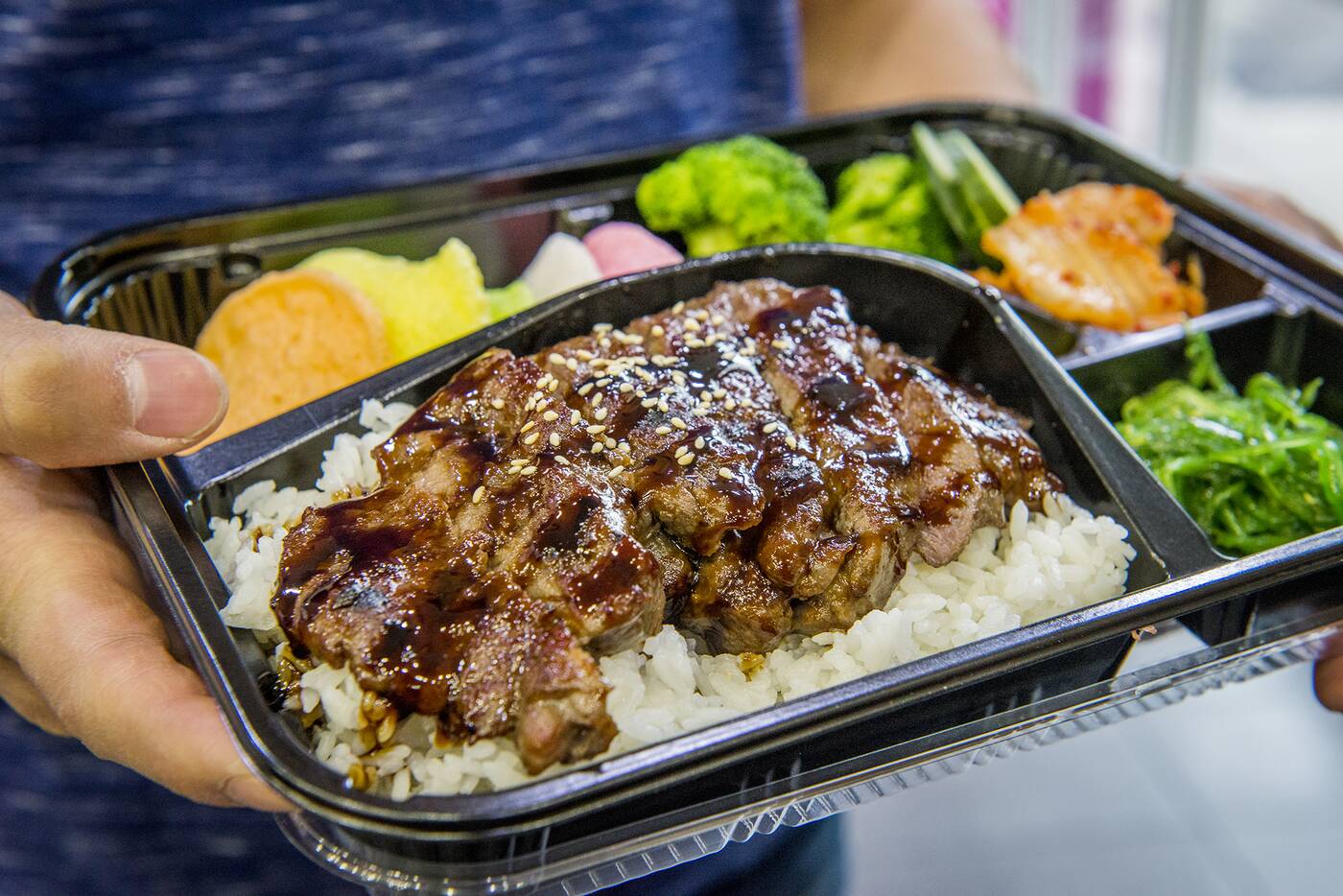 Grilled beef ($10.99) ended up with a bit of a seafood undertone to the flavour since everything is cooked in such close quarters, so maybe just stick with fried goodies. 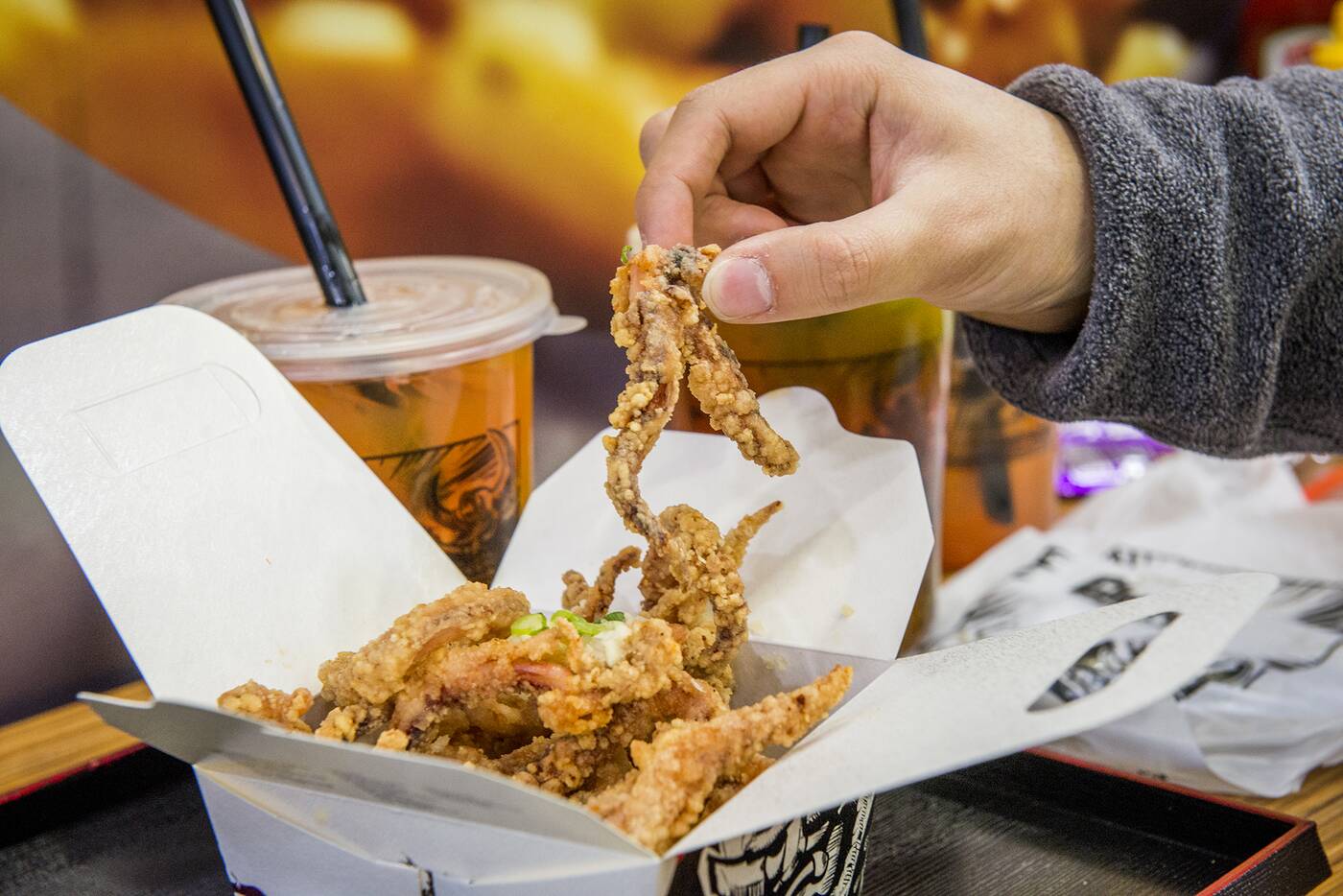 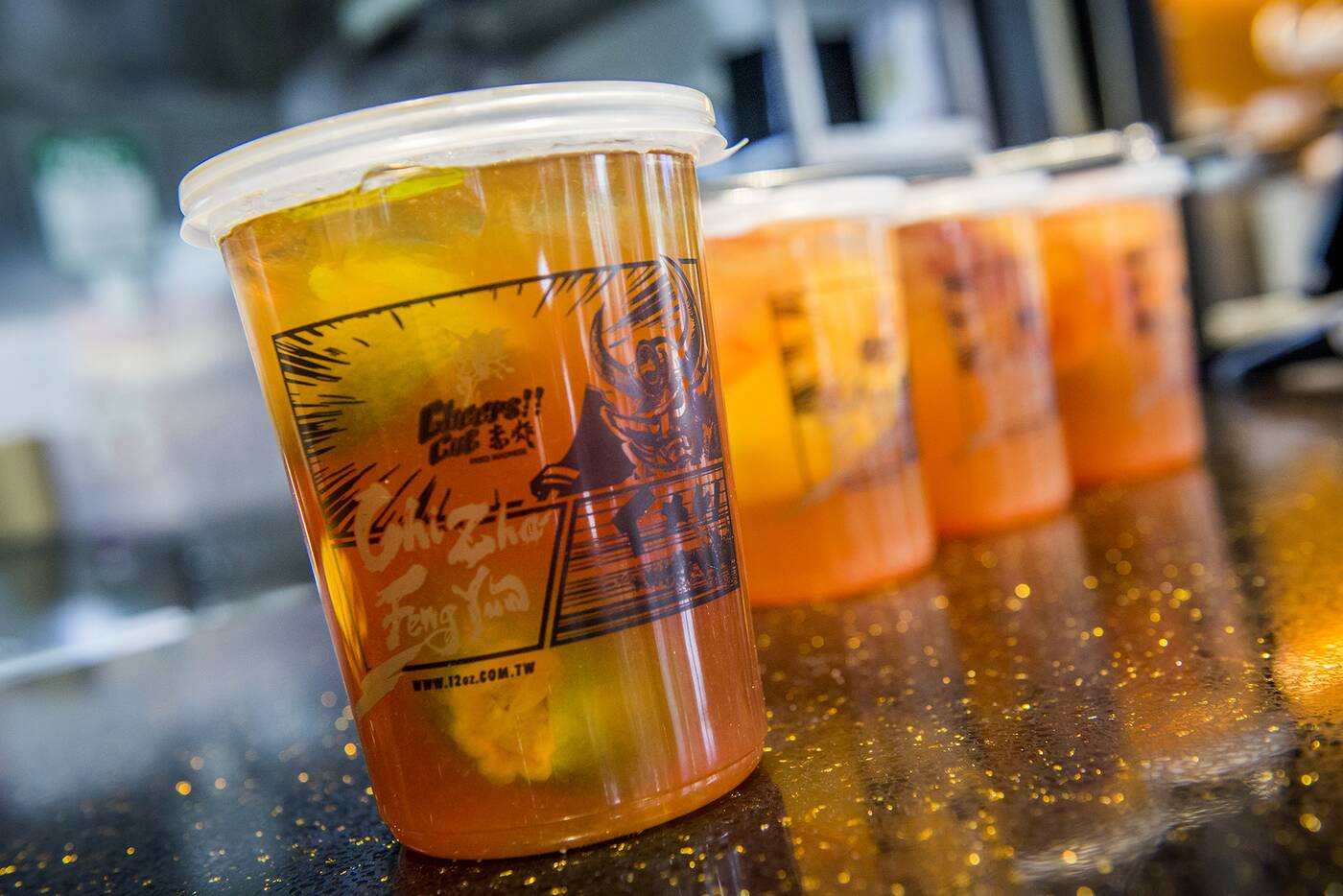 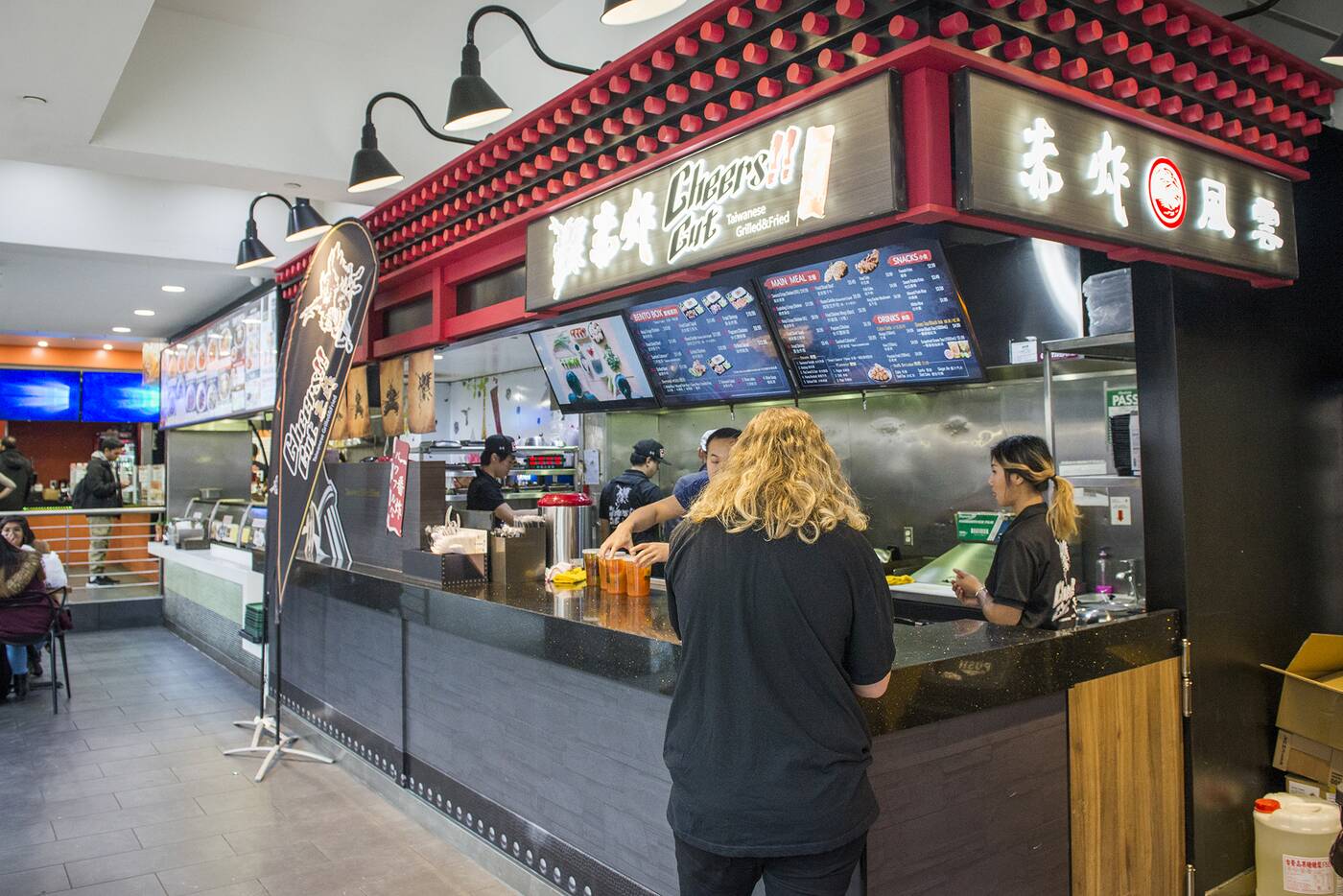 But back to the chicken: when it comes to longevity, the Ninja wins out with its thicker flour coating, still crispy later in comparison to the Samurai, which gets soggy quickly. As for how it stacks up against other XXL fried chicken places in town, head to nearby Monga or Hot Star yourself for a taste test comparison. 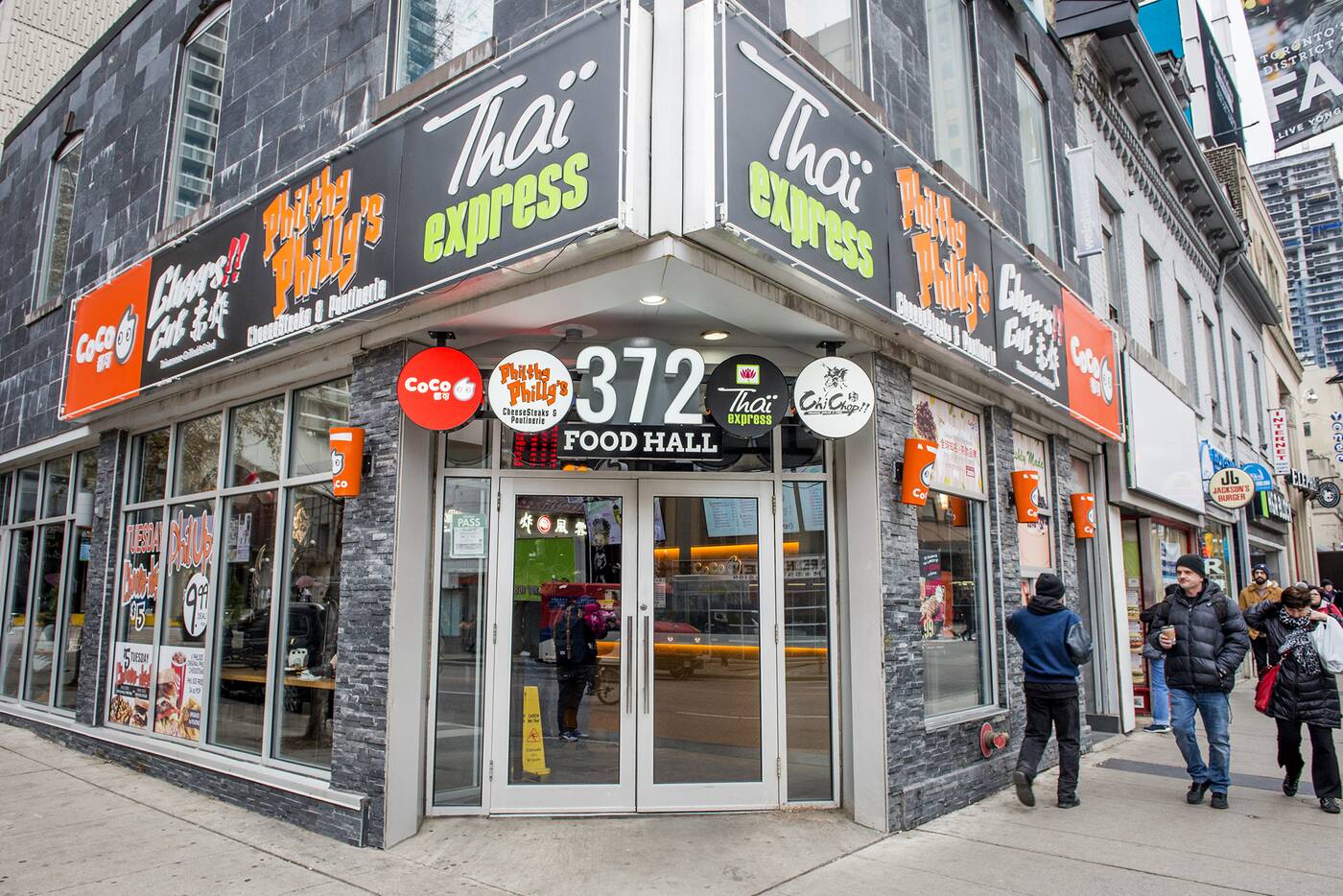 Update: Cheers Cut has since changed its name to Chi Chop.