The highly-anticipated collaboration takes over the iconic space of what used to be Panorama Lounge, and subsequently The One Eighty. 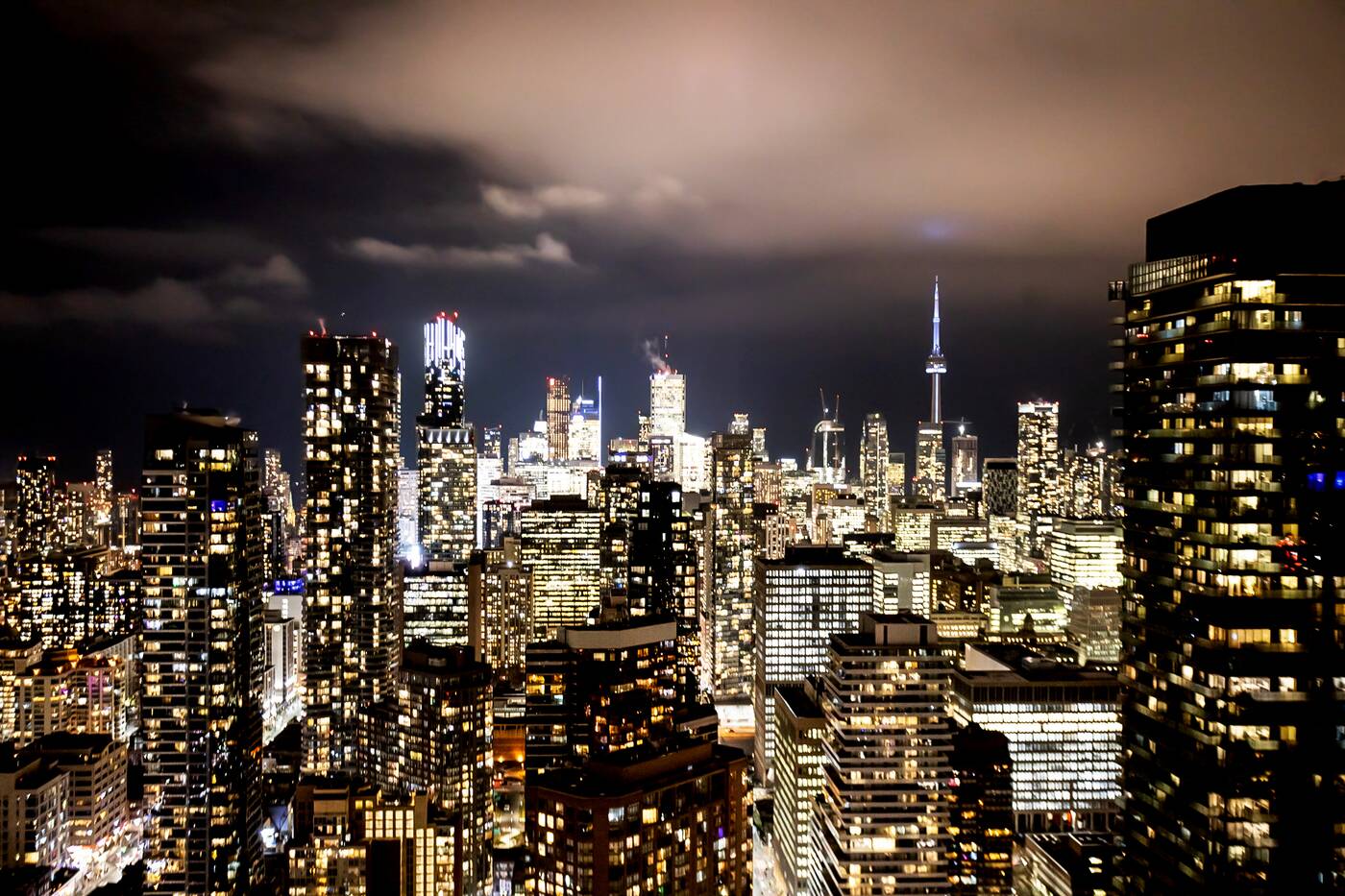 AP doesn't only have the highest rooftop patio but also offers views of the city – look north and see every detail of midtown Toronto; look south for welcoming and unobstructed views of the core's bustling high rise-filled skyline. 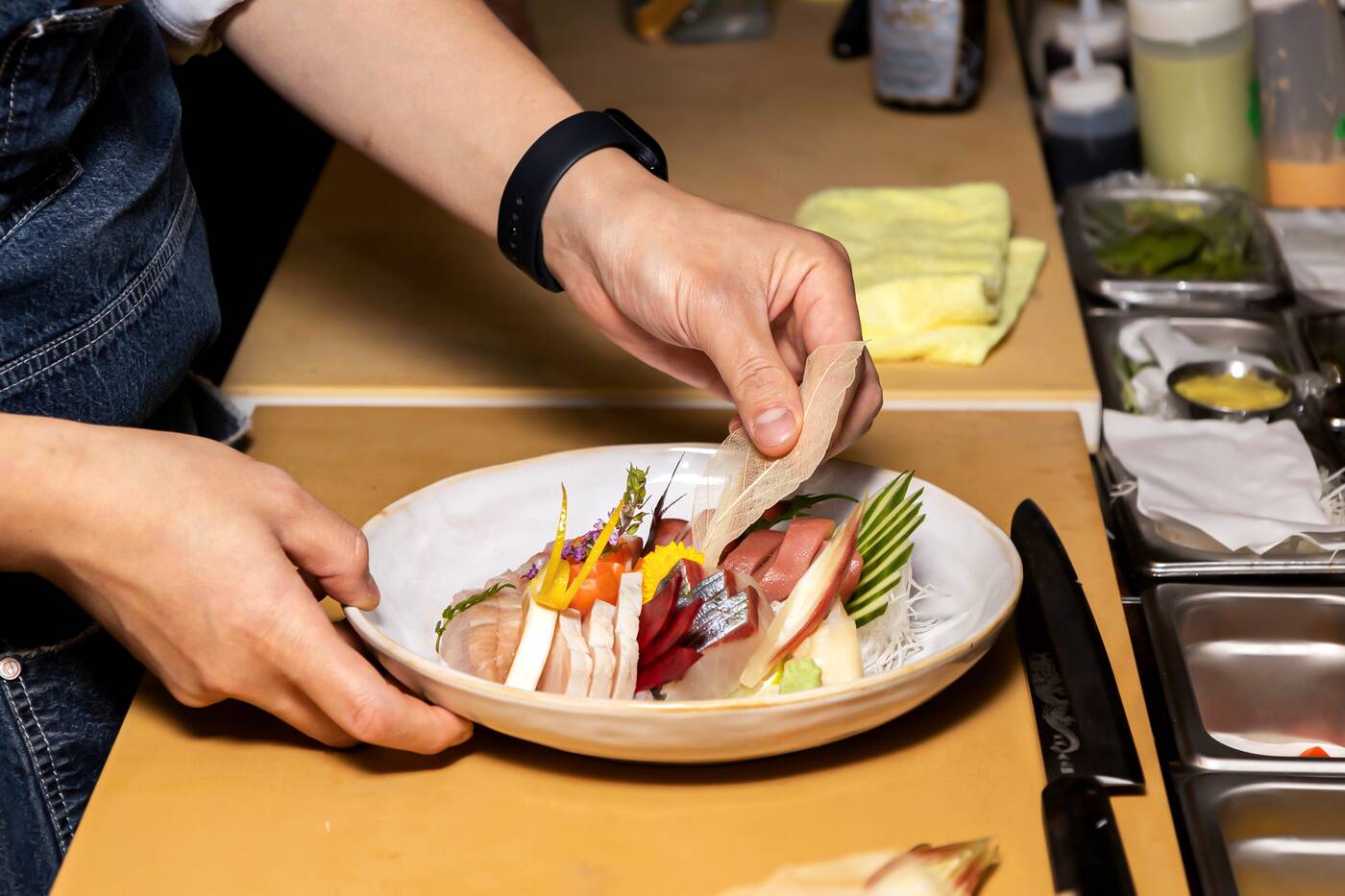 He first introduced this interpretation of Japanese-focused cuisine which uses pan-Asian and Canadian ingredients spiked with South American flavours in 2012 at his flagship restaurant, Park, in Montreal.

"Not everything we source is traditional Japanese, but we do things in-house respecting the Japanese way of doing it," said Park. "I try to bring in the different flavours of my background: I was born in Argentina and grew up in Paraguay and Brazil; I did culinary studies in Japan; and have Korean parents." 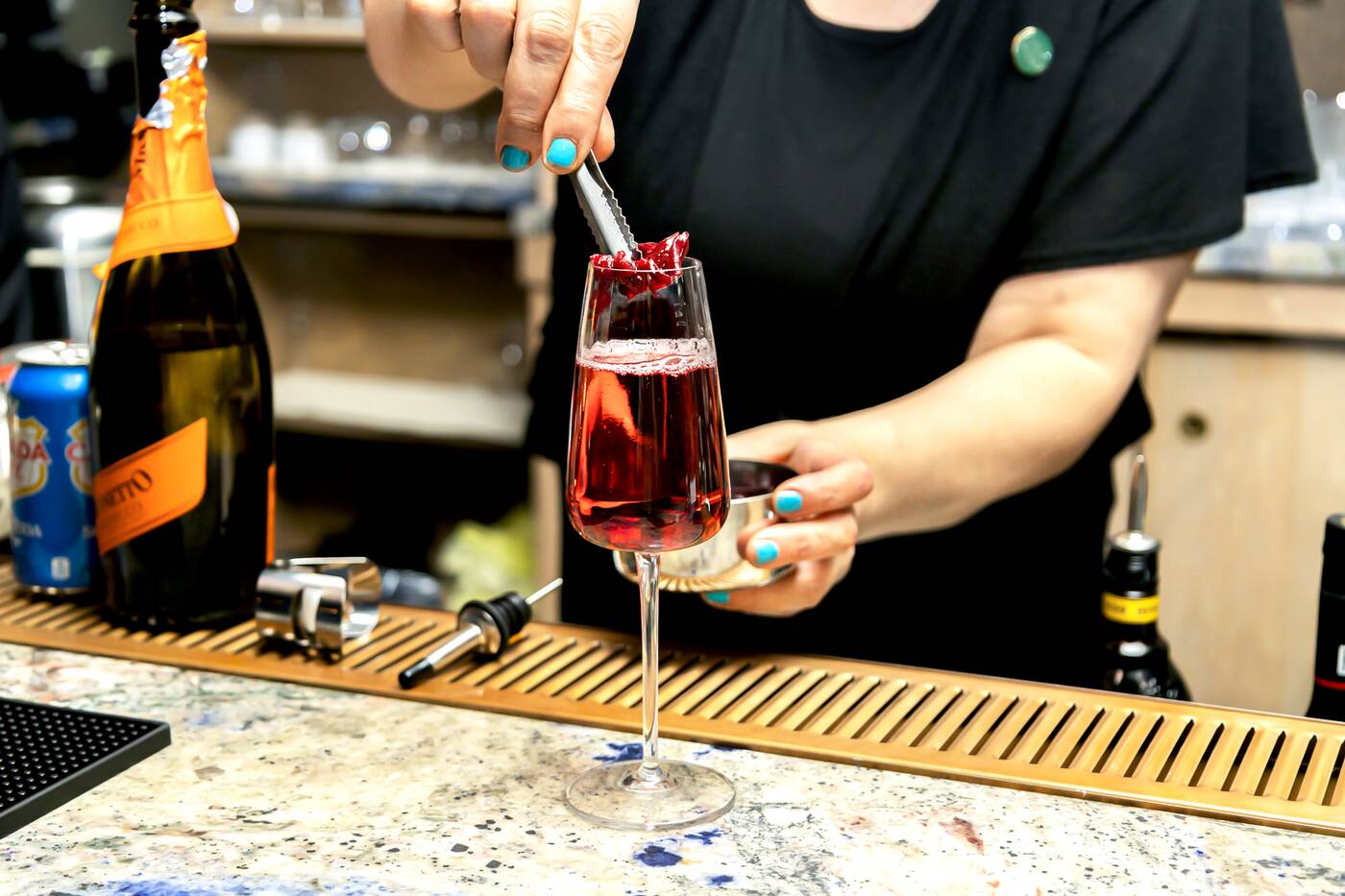 Although Park dabbled in the Toronto food scene and collaborated with Drake in Pick 6ix, which shuttered shortly before the pandemic, the current partnership allows the chef's cuisine to shine with Scale Hospitality's signature service and design.

"Antonio and I have been talking about this collaboration for over 10 years, but I wanted to make sure his entrance into the Toronto market was on the highest level possible," Harji, CEO of Scale tells blogTO. 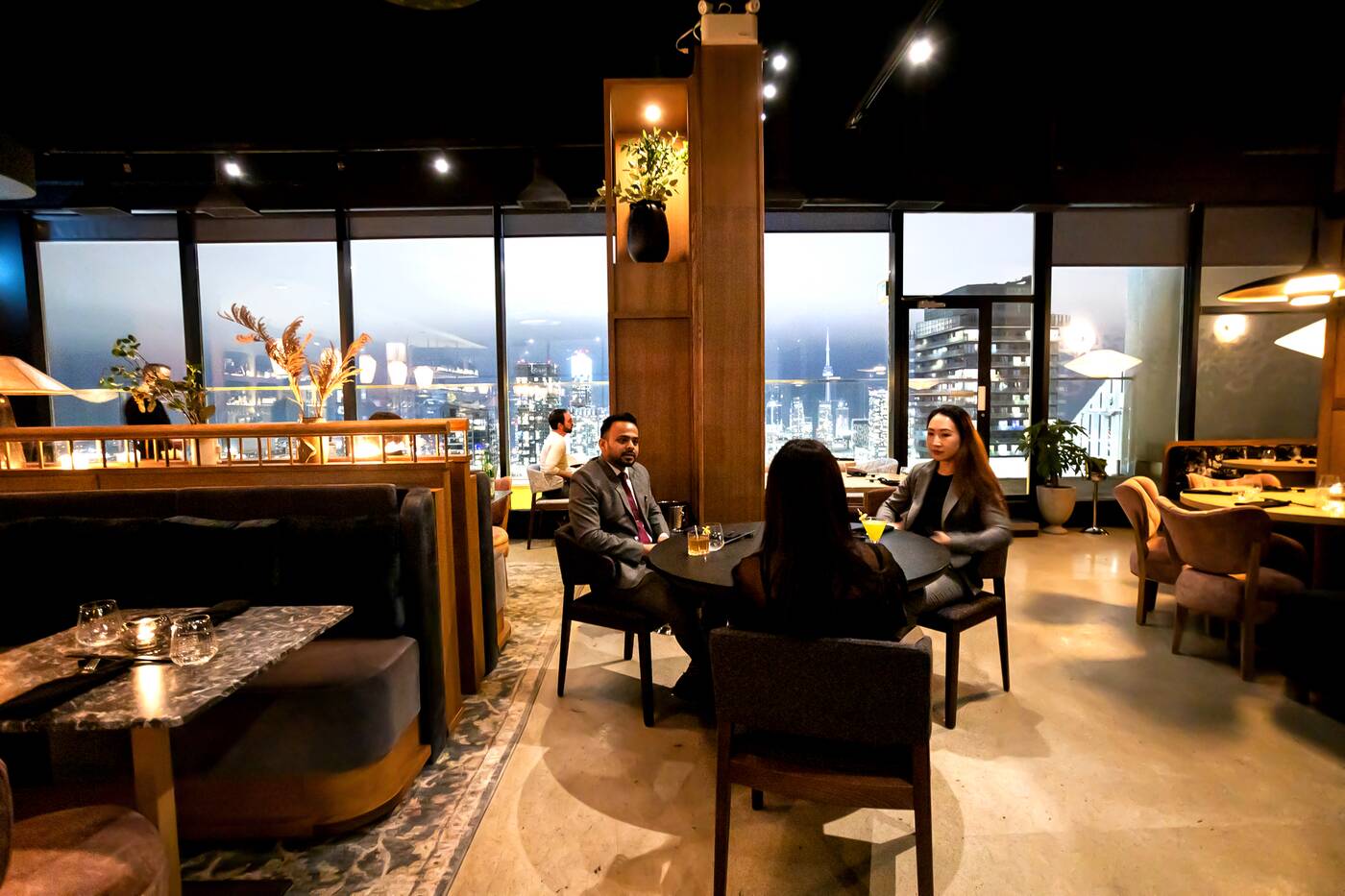 (AP is the latest among a series of contributions Scale has made to the city's food and drink scene including the relaunch of Le Sélect Bistro, Miss Likklemore's and Black Pearl.)

"With [corporate executive chef ] Ted [Corrado] joining our team and the evolution of Scale, we finally felt we could do justice to have a truly upscale restaurant with a chef like Antonio. He has such a multilayered approach to Japanese food, but always keeps at heart the notion of Japanese culture in his multicultural way. It was the right fit for us."

"This is one of those spaces I feel fortunate to be able to be in. So, when there was a chance to take over the space, the first person I called was Antonio." 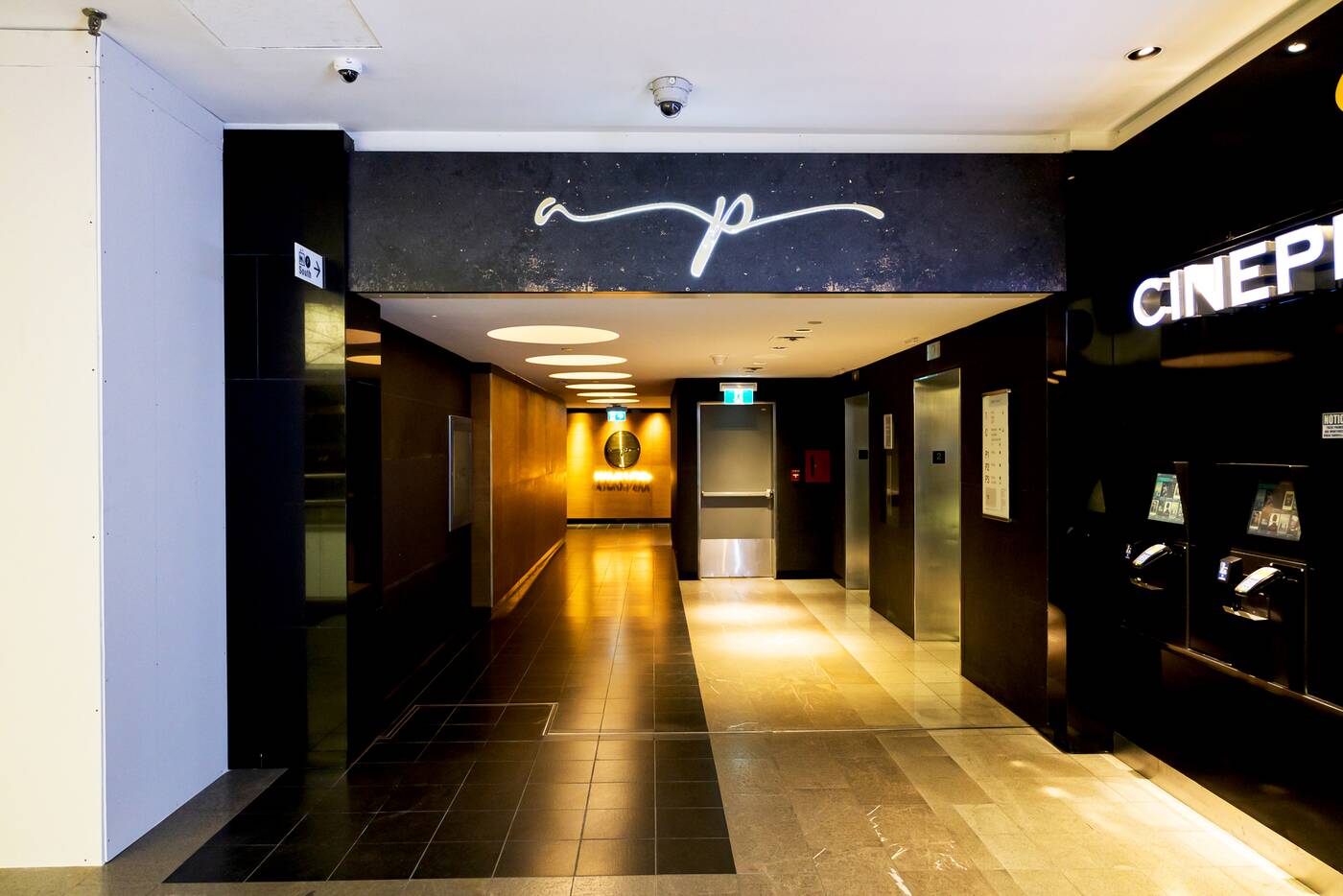 For those who haven't been to AP or its predecessors, the fully accessible space is accessed by its own elevator that's located down the hall to the left of the Cineplex Varsity Cinemas. Take the minute ride up the elevator to reach the restaurant's foyer which quickly opens to the window-wrapped Block Plan Studios designed space. 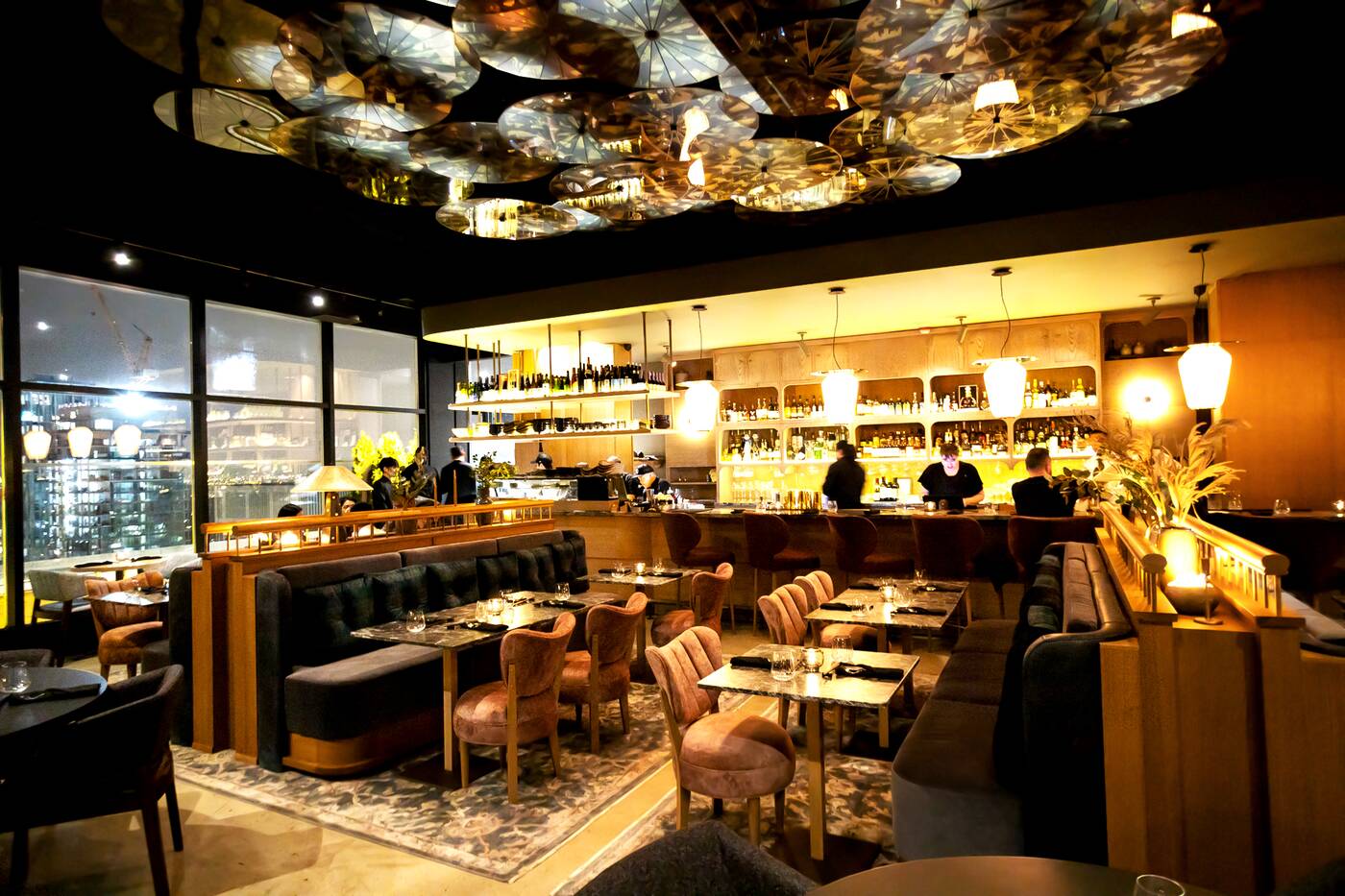 The dark and contemporary wood-lined room is filled with plush low banquettes, with subtle Asian nods in the ceiling installations floating above the dining area.

There are tucked-away pockets for semi-private dining, and two long outdoor patio spaces open when the weather permits. 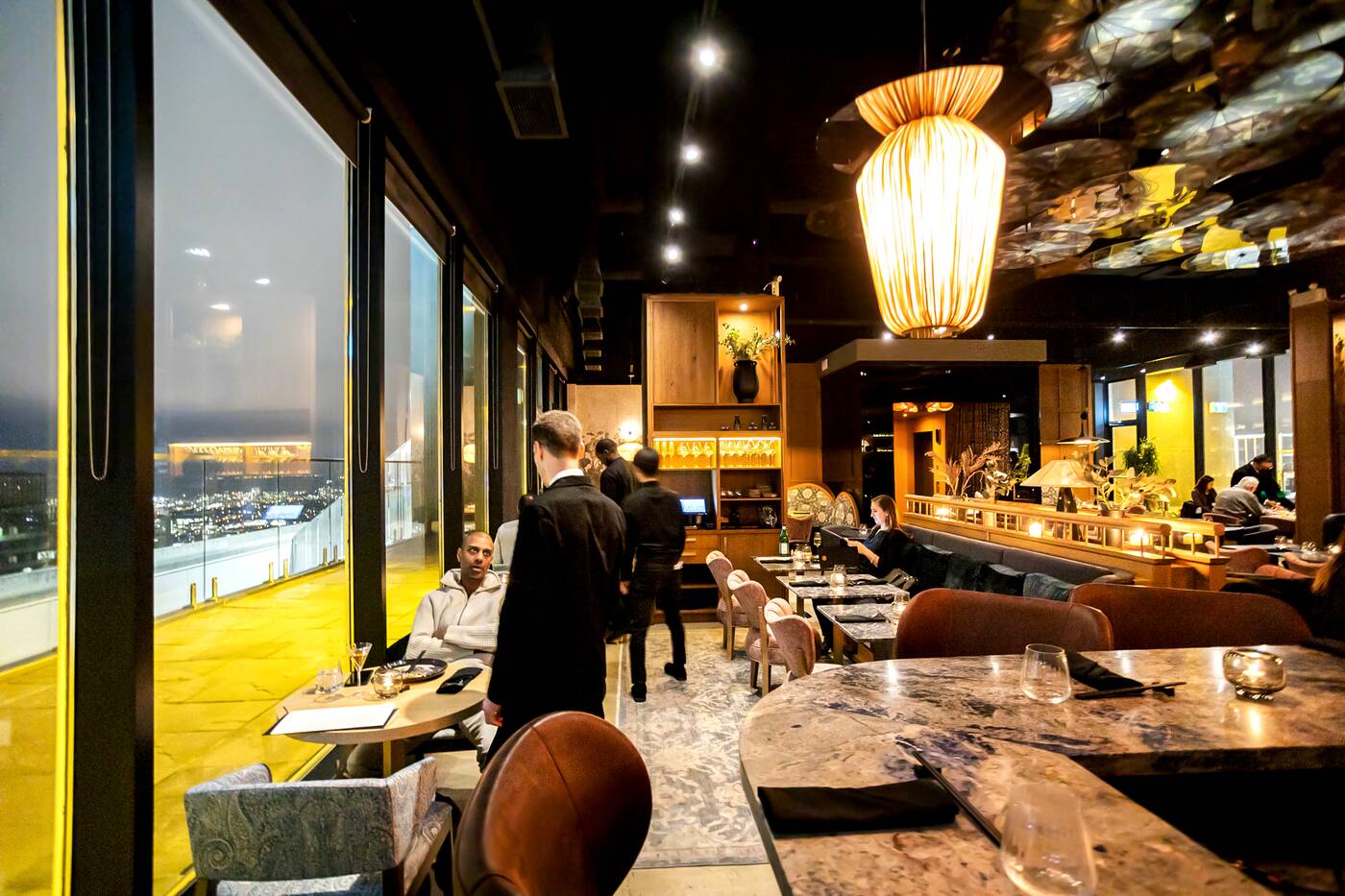 Here, Corrado, along with the in-house team, help to tailor Park's cuisine to the Toronto audience.

That means premium ingredients like fish flown in from outside Canada – although Park does source fresh catch from the east coast (Park's sister lives in Yarmouth, Nova Scotia) – mingling with wagyu beef, which all get gilded with edible gold leaf or tumbles of Osetra caviar. 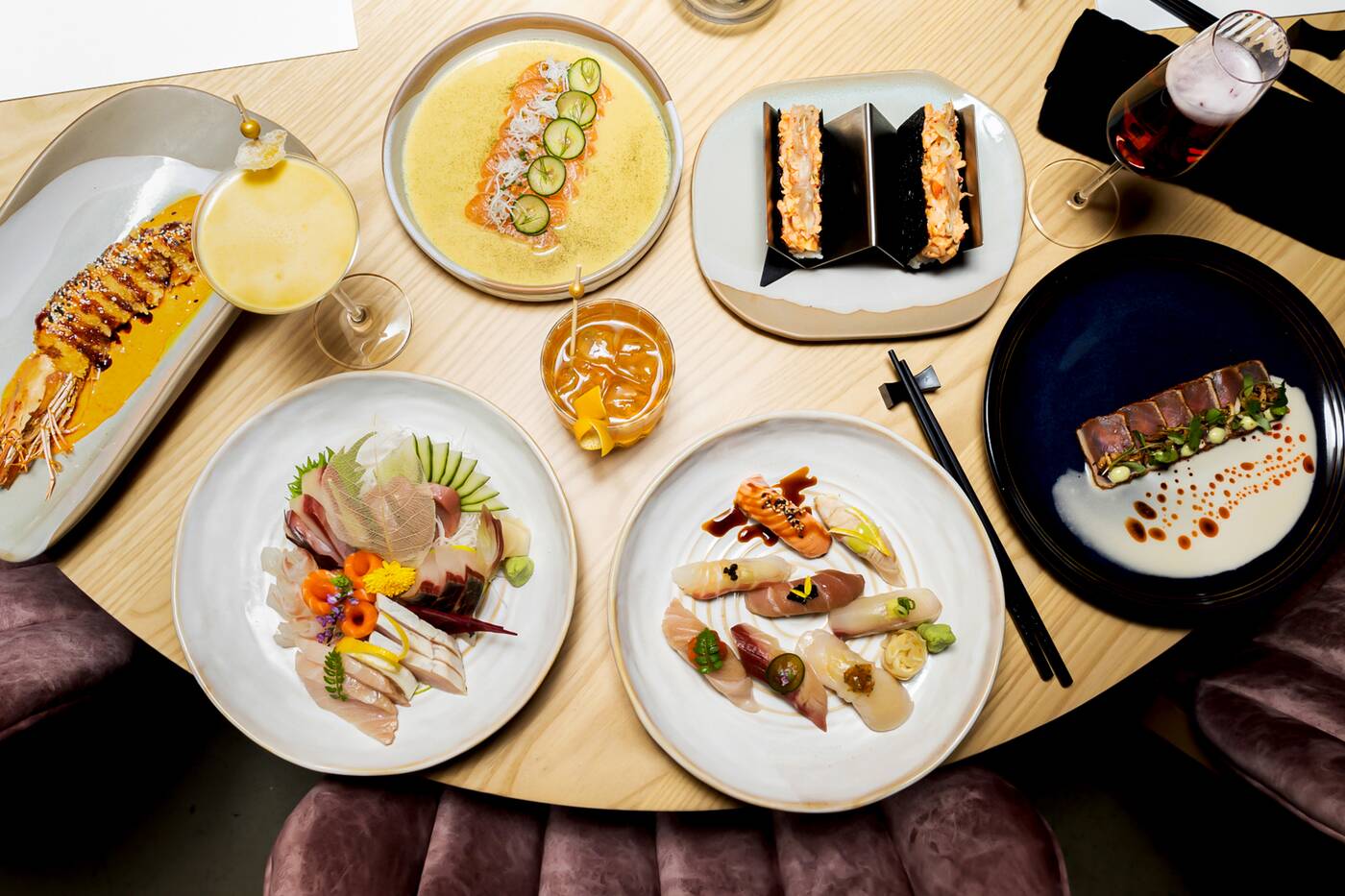 "Having Ted next to me, and me next to Ted is a true blessing. We've done many events in the past together and are friends. He's earned a lot of trust from a lot of chefs including myself," said Park.

Speaking about this opportunity, Park notes: "I'm from Montreal, but I think Toronto is a bigger scene, and my mistake was never having done enough research, so I need all the help to build this team properly and work with a chef and an operator who understands how Food and Beverage works." 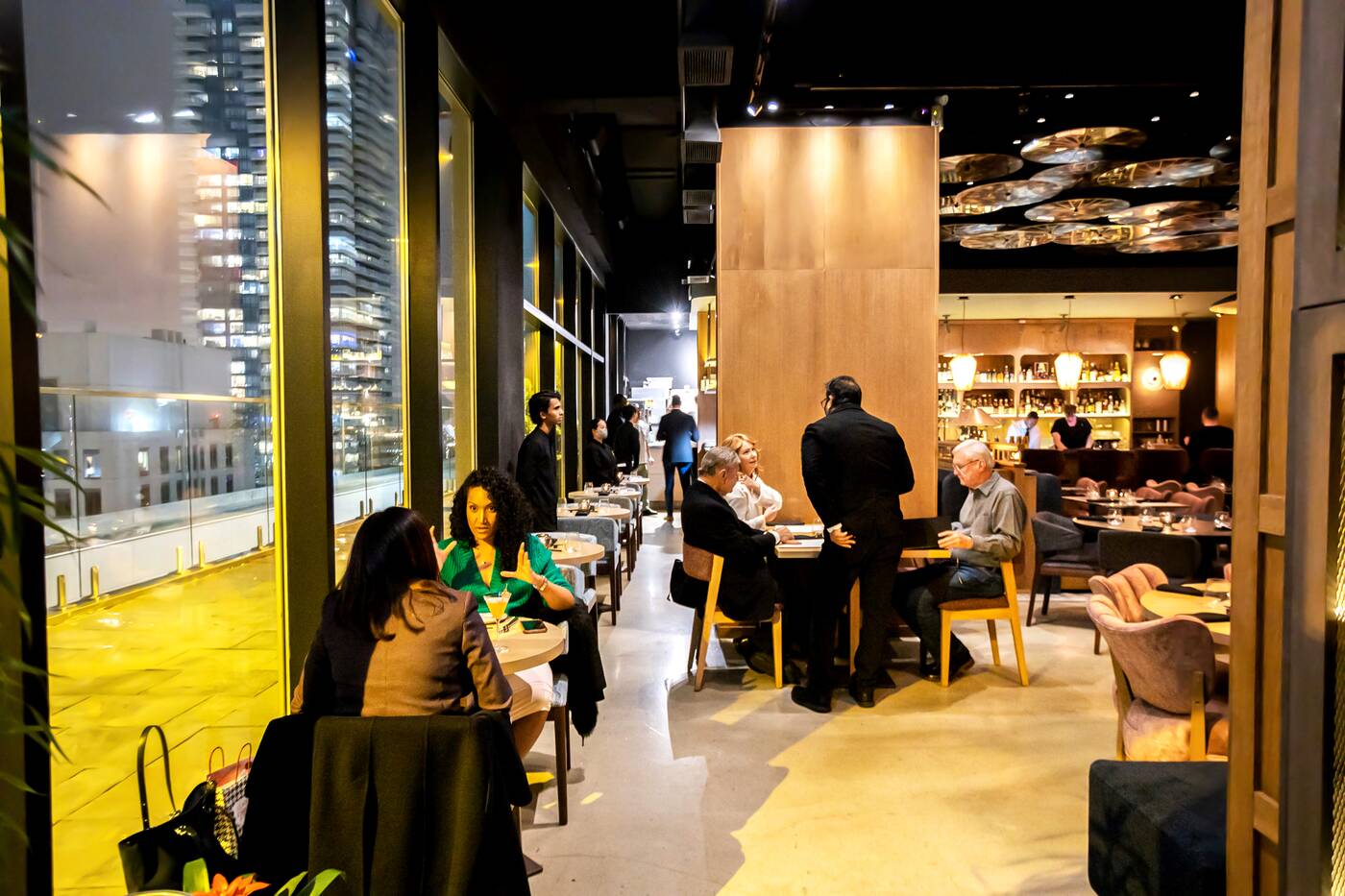 "I'm very thankful and grateful that Ted and Hanif are there supporting me. We have a spectacular team at AP and it's time for my [sushi chef] student Jun, and [kitchen chef] Kai to shine under Ted," says Park. 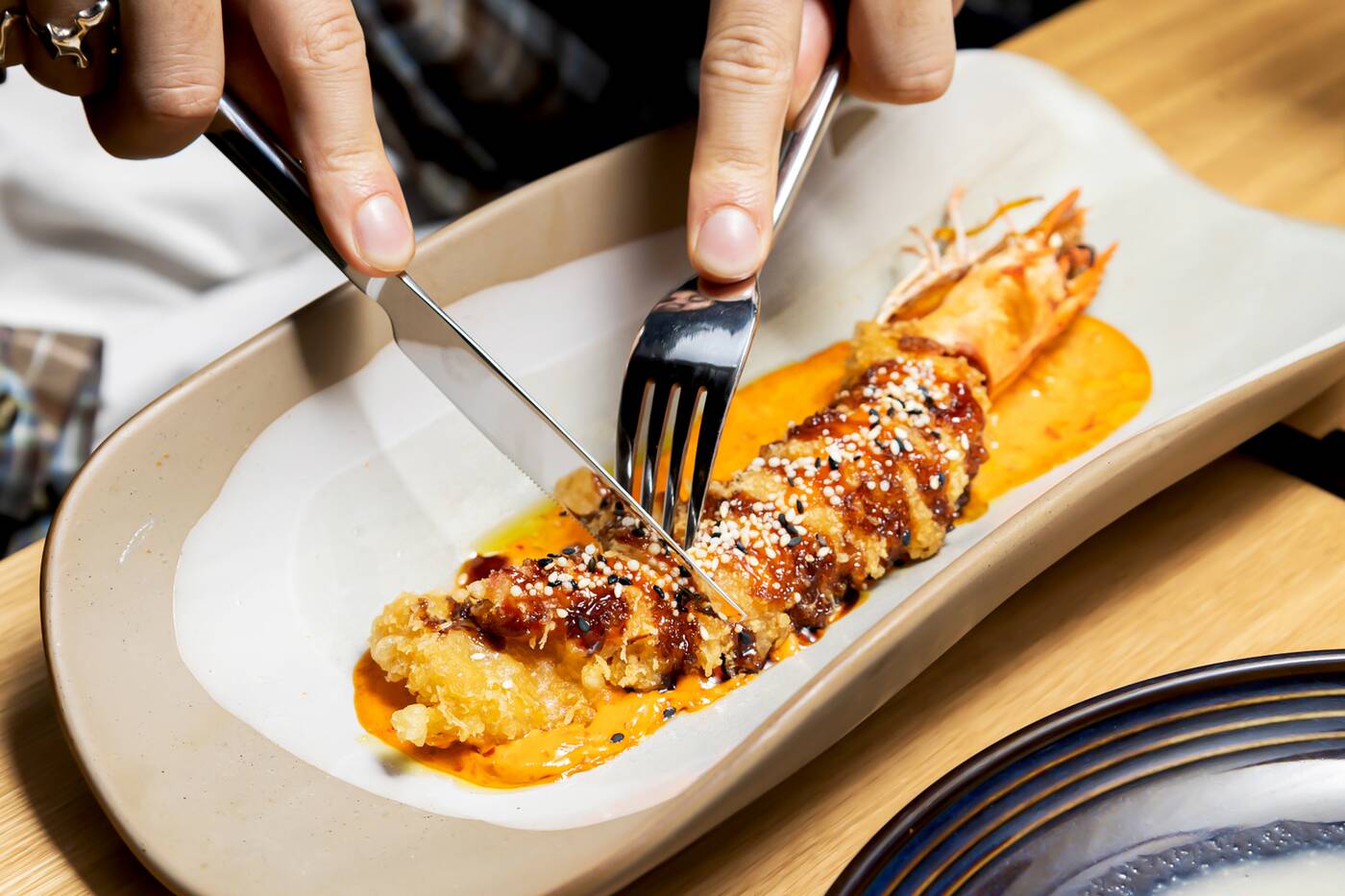 Hot starters include this Jumbo Shrimp Tempura ($24) which showcases a huge 6/8 tiger prawn prepared tonkatsu-style that’s exceptionally crunchy due to the tempura batter coating with the addition of tempura bits. The beast is served with a spicy yogurt sauce. 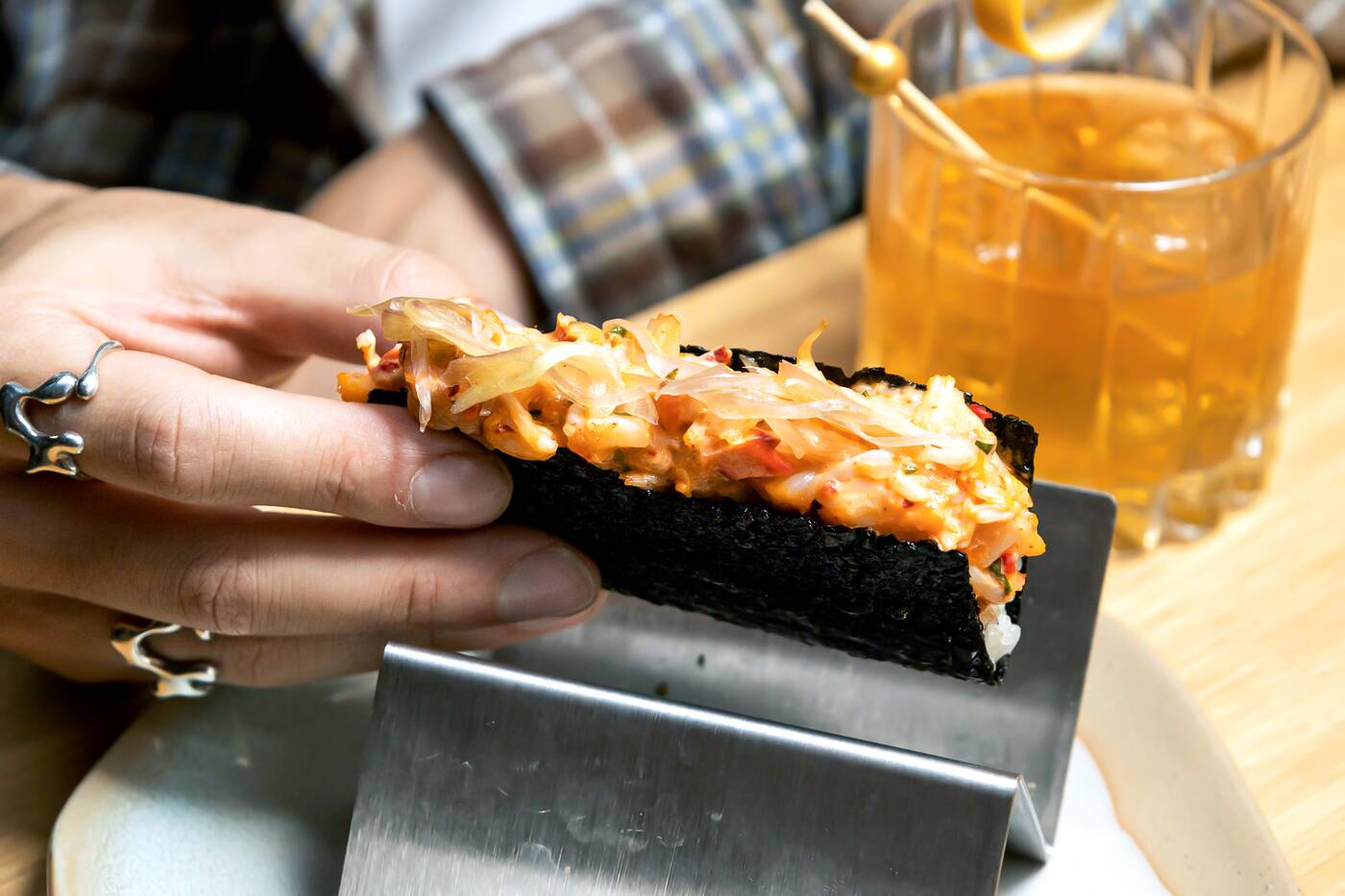 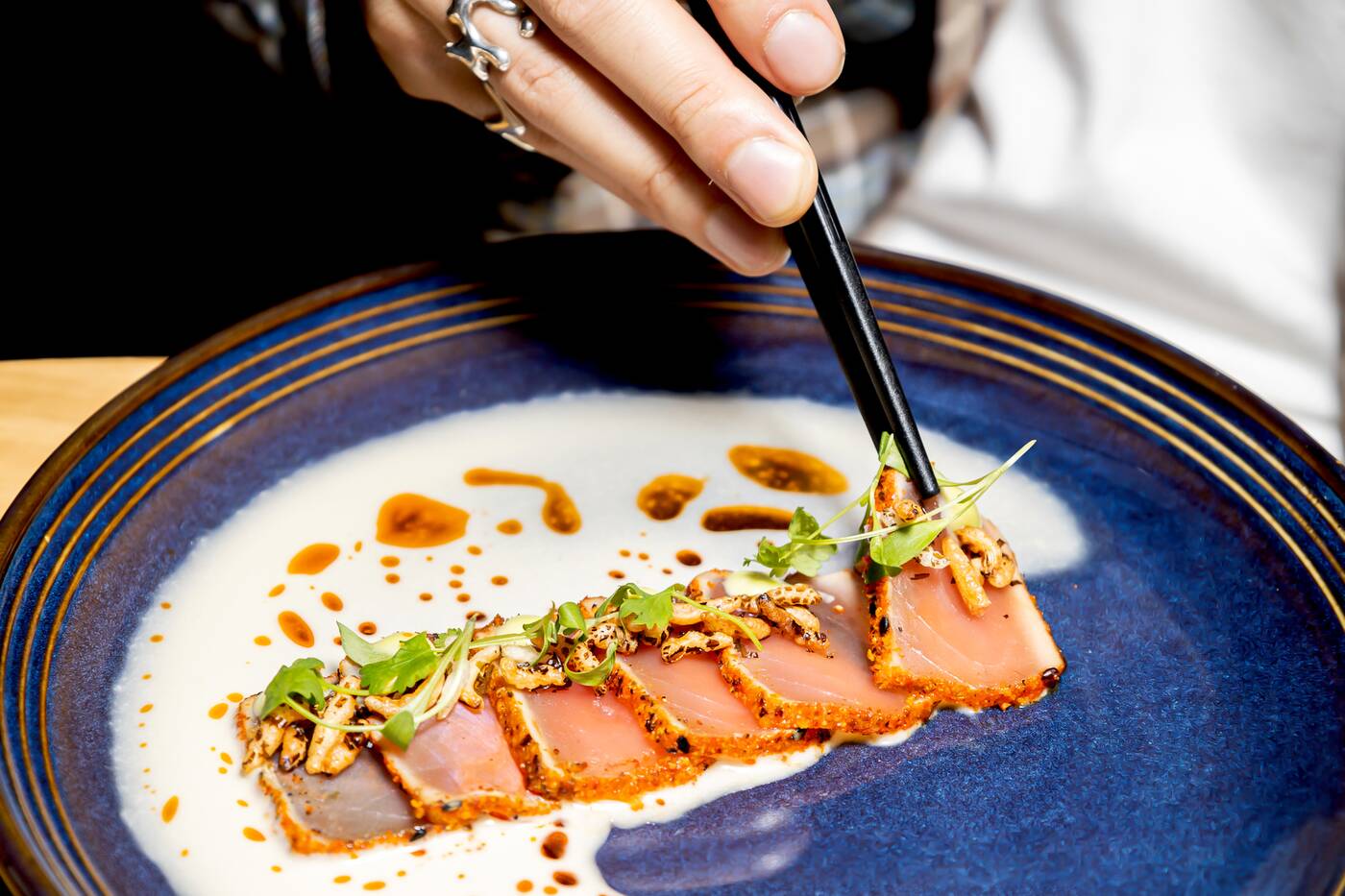 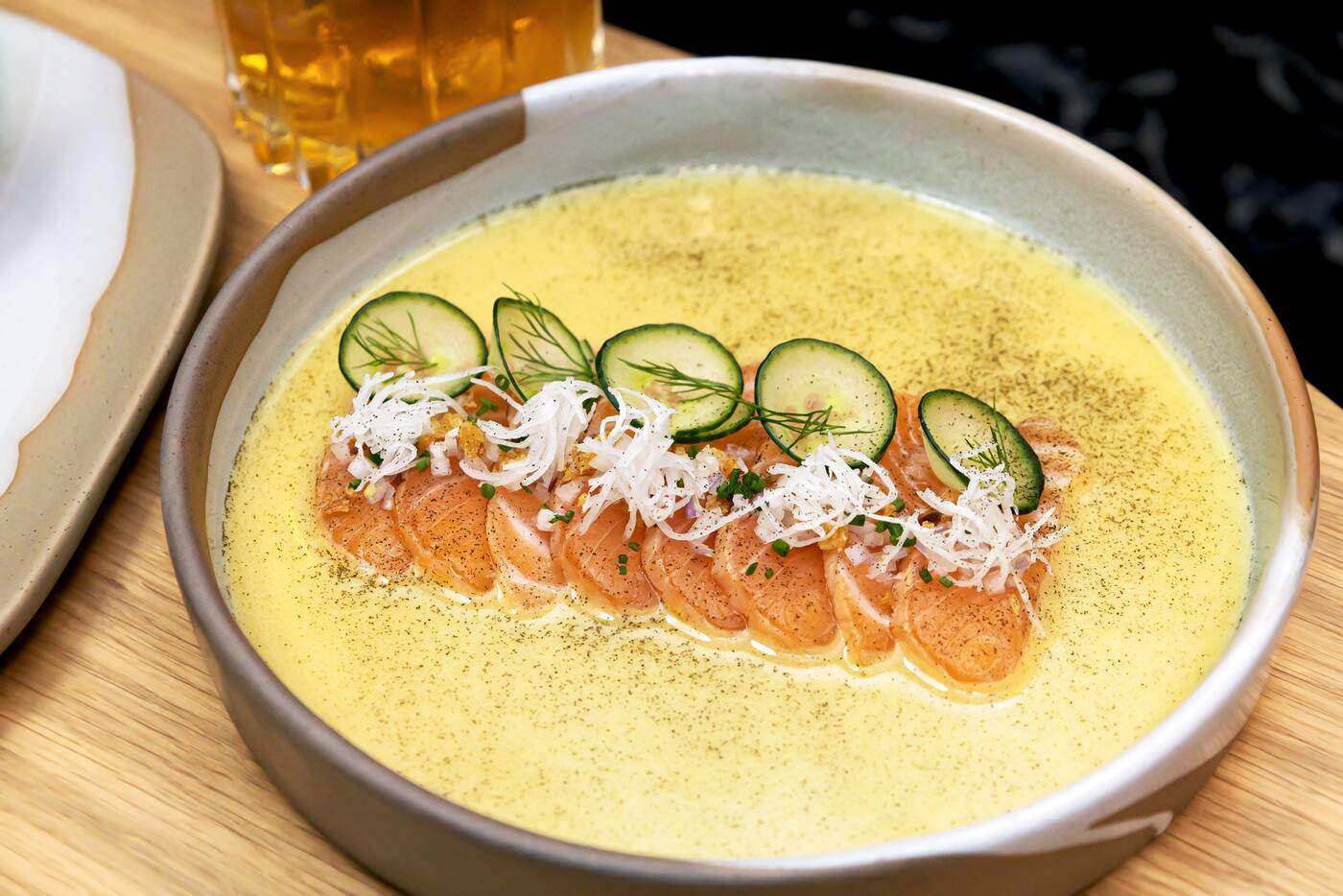 The Ora King Salmon Tataki ($19), on the other hand, swims in a maple mustard sauce. The rich yet delicate fish is lightly flame-seared before it's garnished with cucumber and dill. 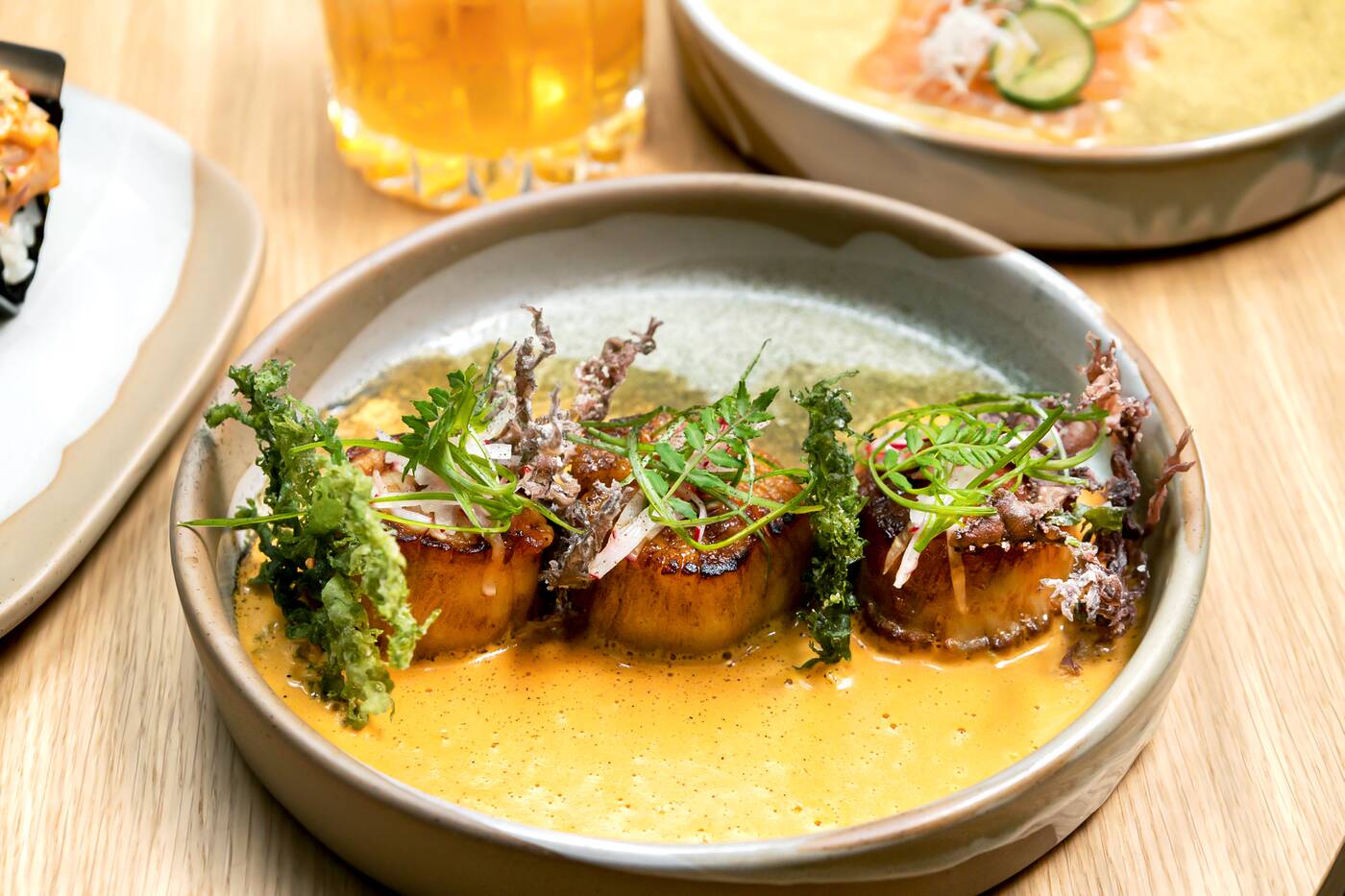 A nod to the restaurant's Pan-Asian influences, the Scallops ($45) are one of AP's main plates, which feature seared Hokkaido scallops in a tom yum-spiked brown butter sauce that’s showered with wild radish and crispy seaweed.

Filled with showstopping numbers, the Chef's Selection features manicured sashimi and sushi platters and the stunning – and pricey – Egg On Egg On Egg ($150). 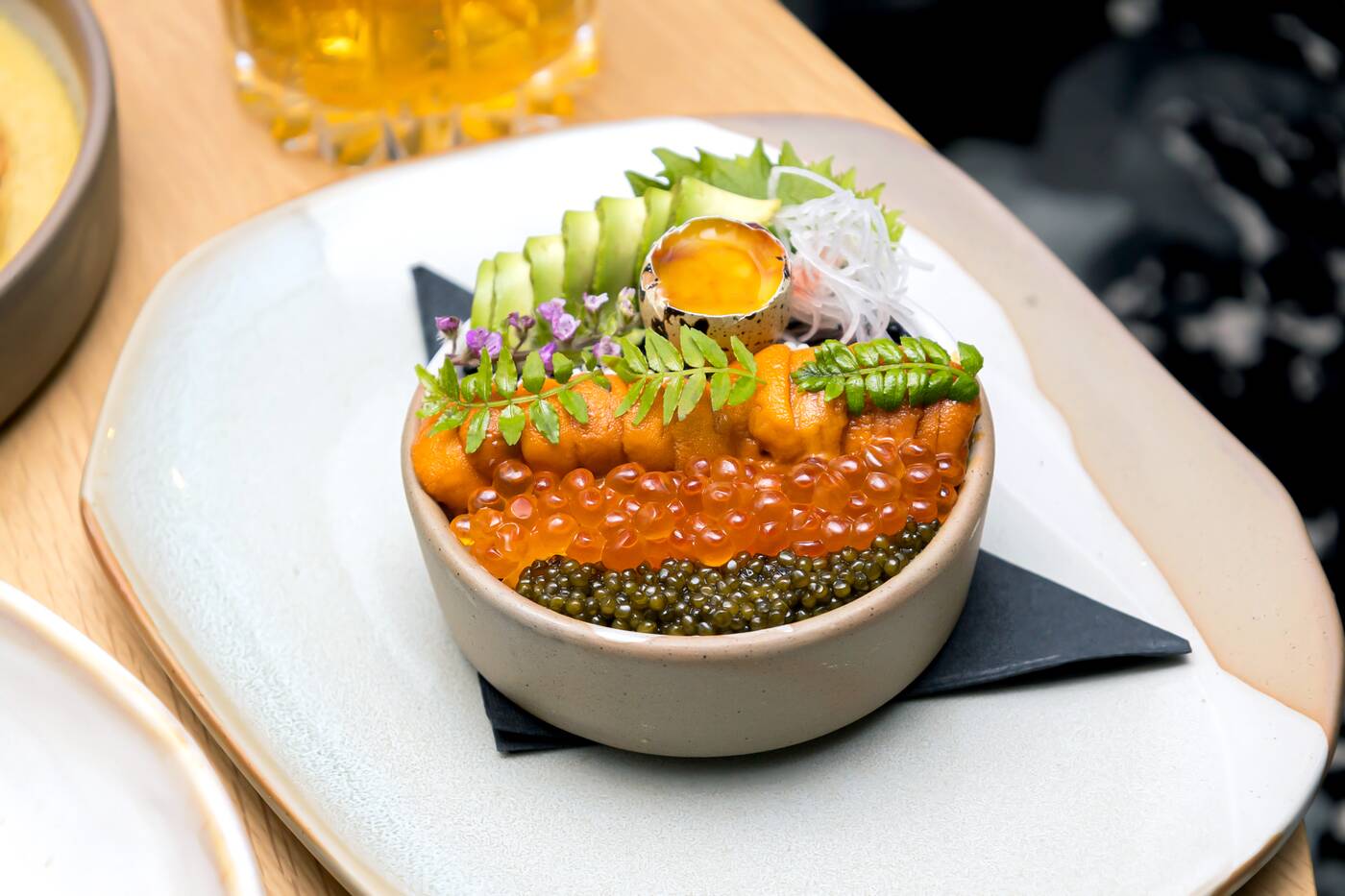 Capped with a ponzu-seasoned uzura (quail egg) yolk that you mix in before eating, it's bite after bite of briny, sea sweet, unctuous, and creamy sensations of ultra-luxurious deliciousness.

This is dreamy for any caviar lover. (Confession: I love caviar.) 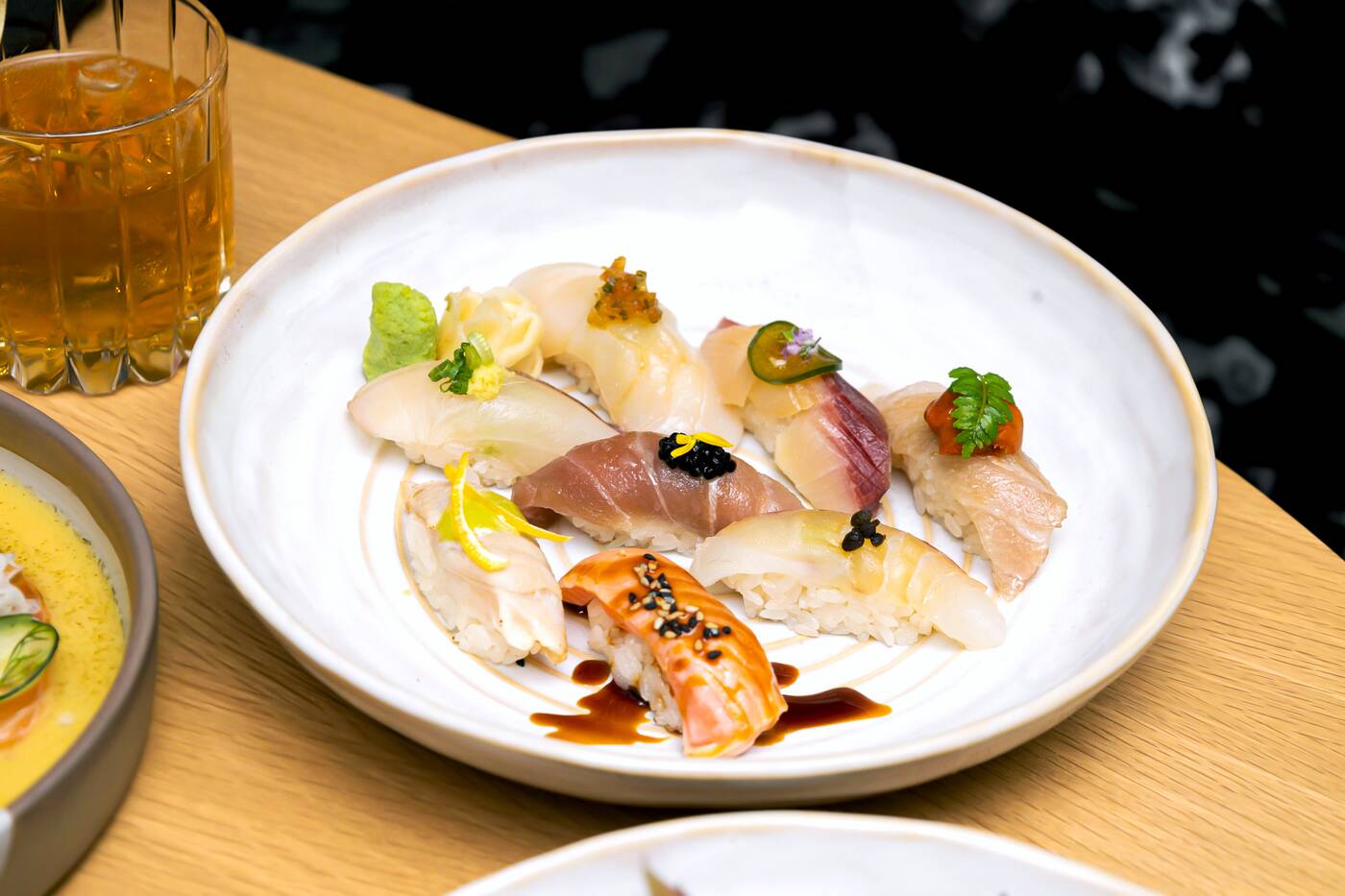 Omakase Nigiri ($65), features a daily selection of eight different nigiris, and could include Ora King salmon with unagi sauce, aburi-style albacore with aji sauce and slivers of yuzu skin, and madai (seabream) as shown here.

There may also be chu-toro with caviar, shima-aji (stripe jack) with fresh ginger and onions, o-toro with uni, hamachi with pickled ponzu jalapeno, and scallop with salsa criolla. 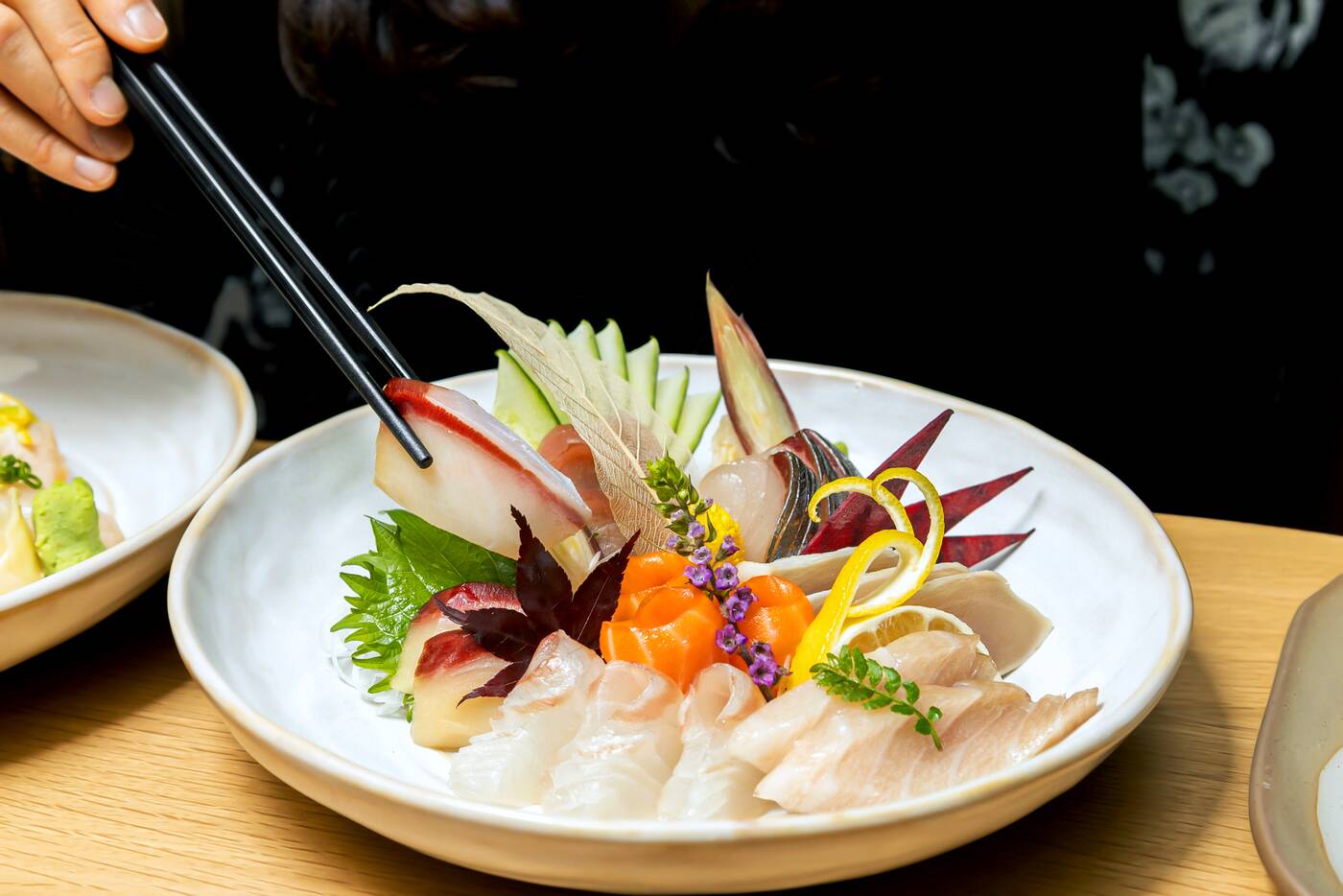 The moriawase is served with AP's tosazu sauce, fresh wasabi, house pickled ginger, and ponzu, plus changing seafood which could include: hamachi, madai, Ora king salmon, shima-aji, BC albacore tuna, and bluefin akami.

Living up to the spendy experience, AP's drink program features predominantly Old World wine, mostly sparklings and whites, peppered with some Napa Valley cabs by the bottle and a handful of by-the-glass options.

For tipplers looking to sip on something stronger, the bar is home to a large spirits collection with plenty of tequila, even more whiskies, including the largest collection of Japanese whiskies in the country, and a long list of scotch. 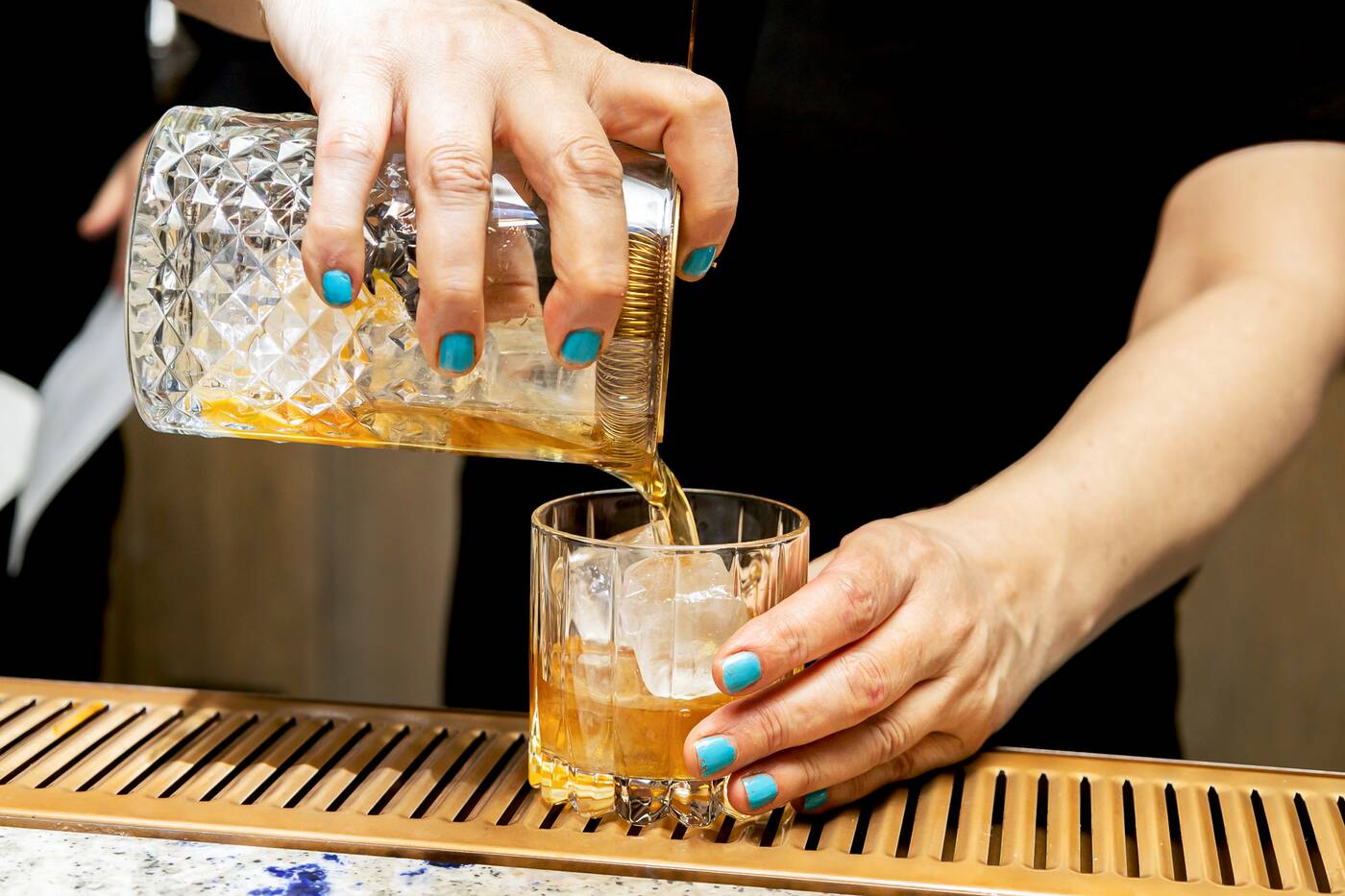 But it's really the deep and growing premium and ultra-premium sake list that has my attention, which features many diverse by-the-bottle options from traditional and new-wave experimental sake makers.

Separated by their characteristics from delicate and refreshing to numbers that are savoury and complex, I try the 'soulful and powerful' Sohomare Kimoto Tobunetsu ($165), a Junmai that sommelier BeiBei Hou recommends.

An interesting sake that can be enjoyed both hot and cold, I find it too easy to drink. It has exceptional balance, acidity and umami, which is fantastic solo or to complement the delicate fare served here.

The drink menu is rounded out by seasonal crafted cocktails that are twists on the classics using Japanese spirits and Asian ingredients such as black sesame, lychee and chai syrup. 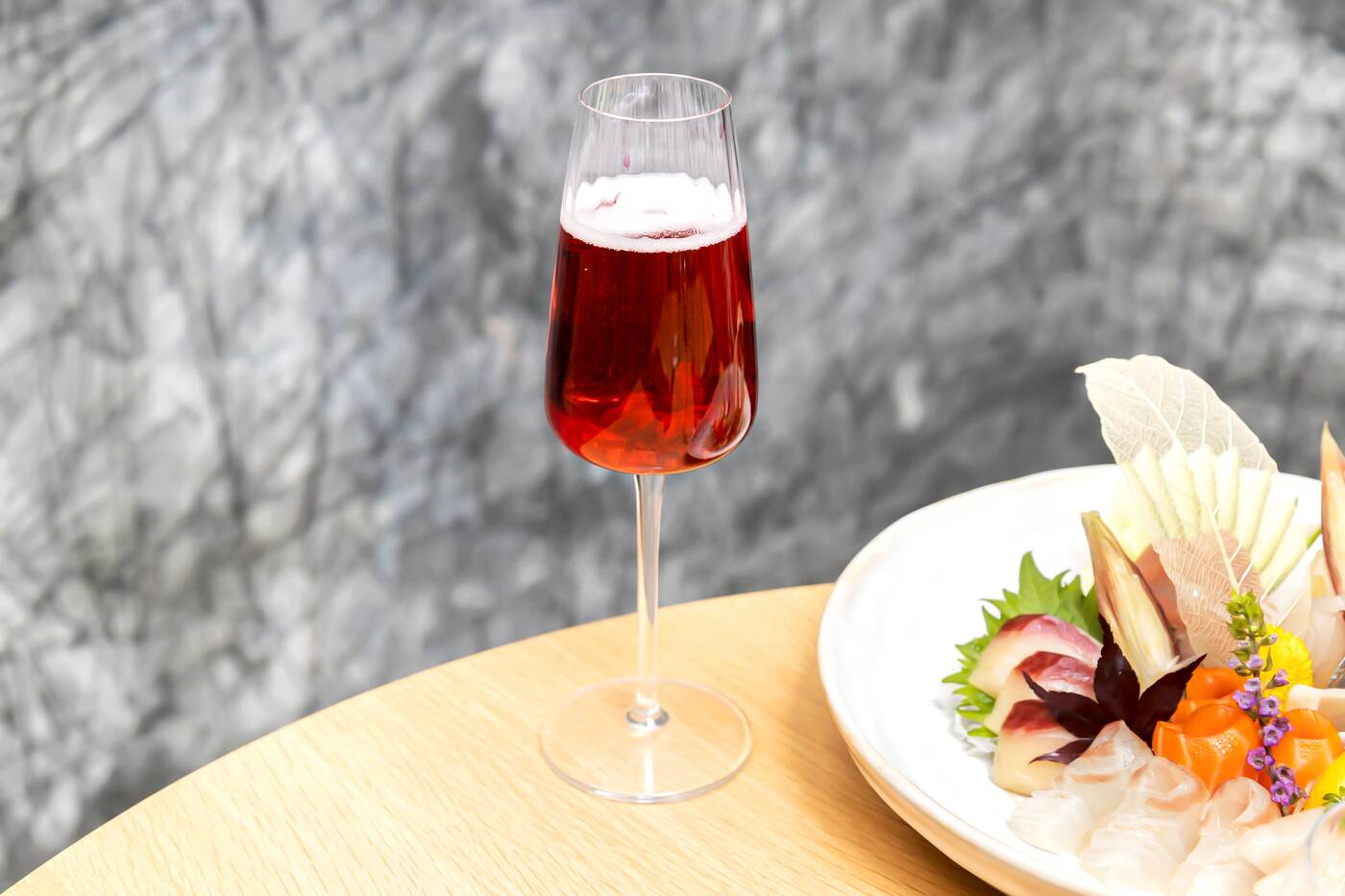 The Hana Spritz ($21) fills a flute with a fruity number that's made from Asian pear sake, St-Germain and hibiscus, which is topped up with prosecco. 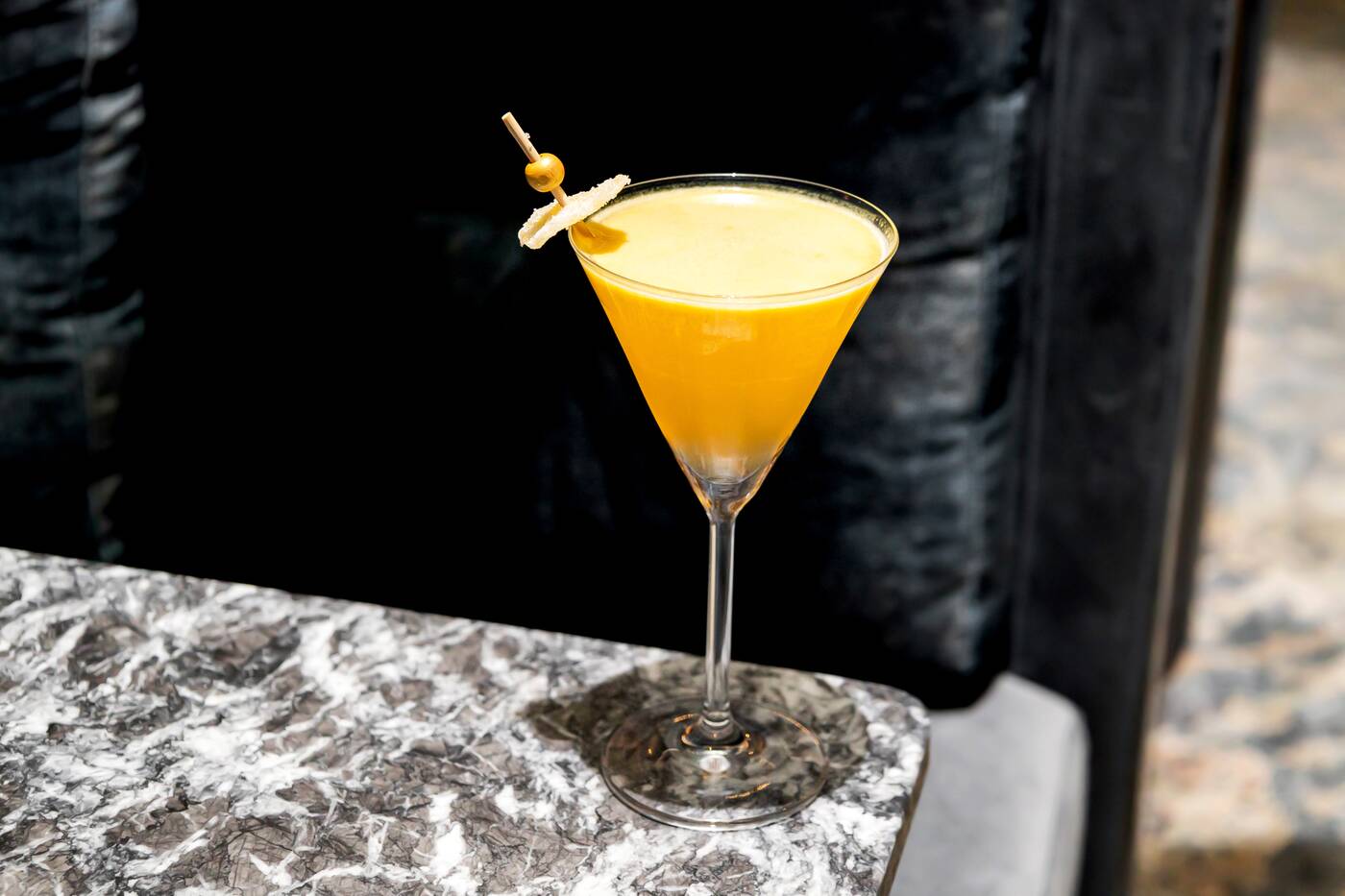 Another crowd pleaser is the Four Islands ($17) that's composed of Ketel One vodka, Domaine de Canton, passion fruit and ginger. 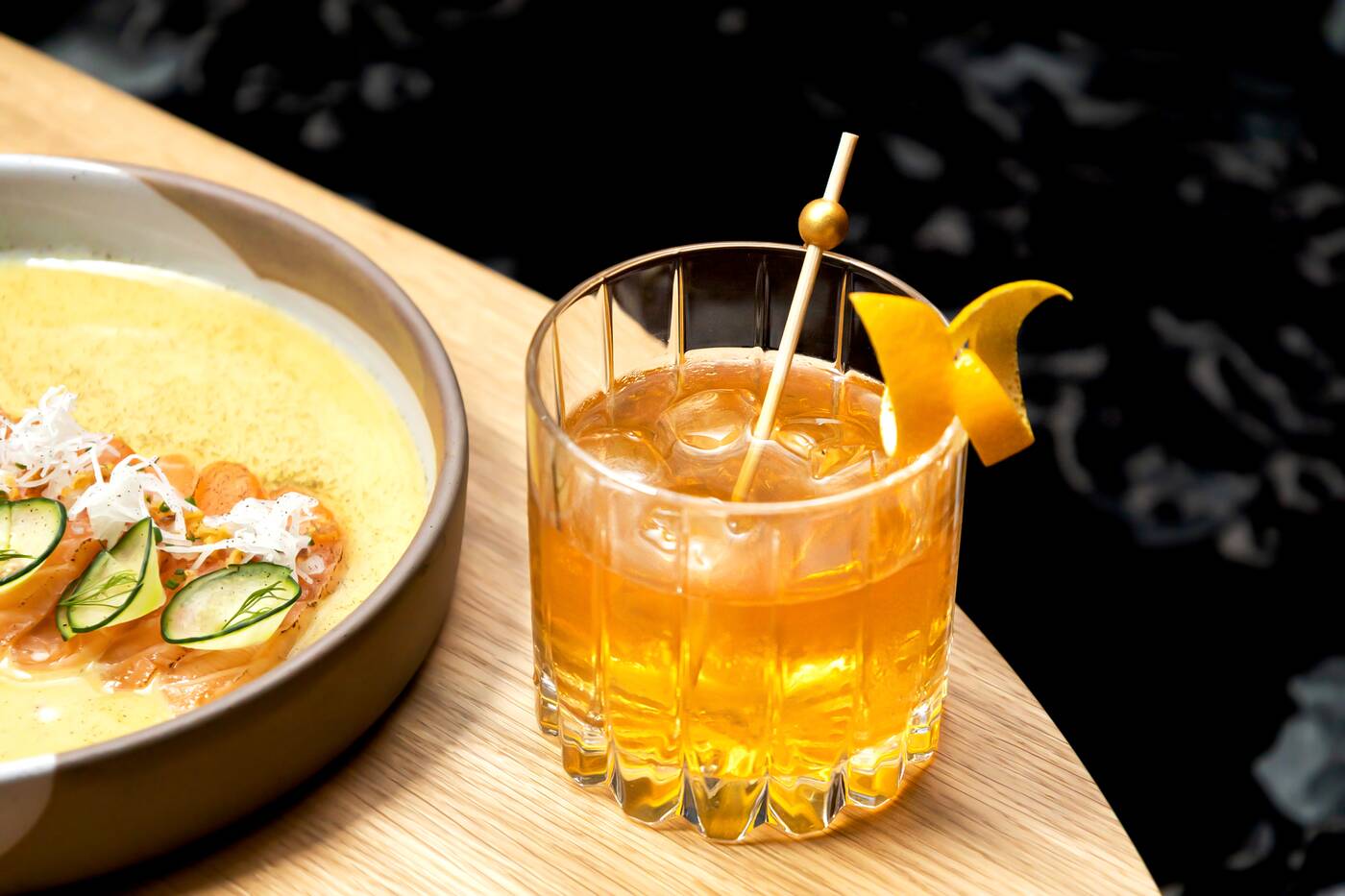 The Yoichi Old Fashioned ($28) is a good sipper made using Nikka (whisky) from the barrel with demerara cubes and bitters. 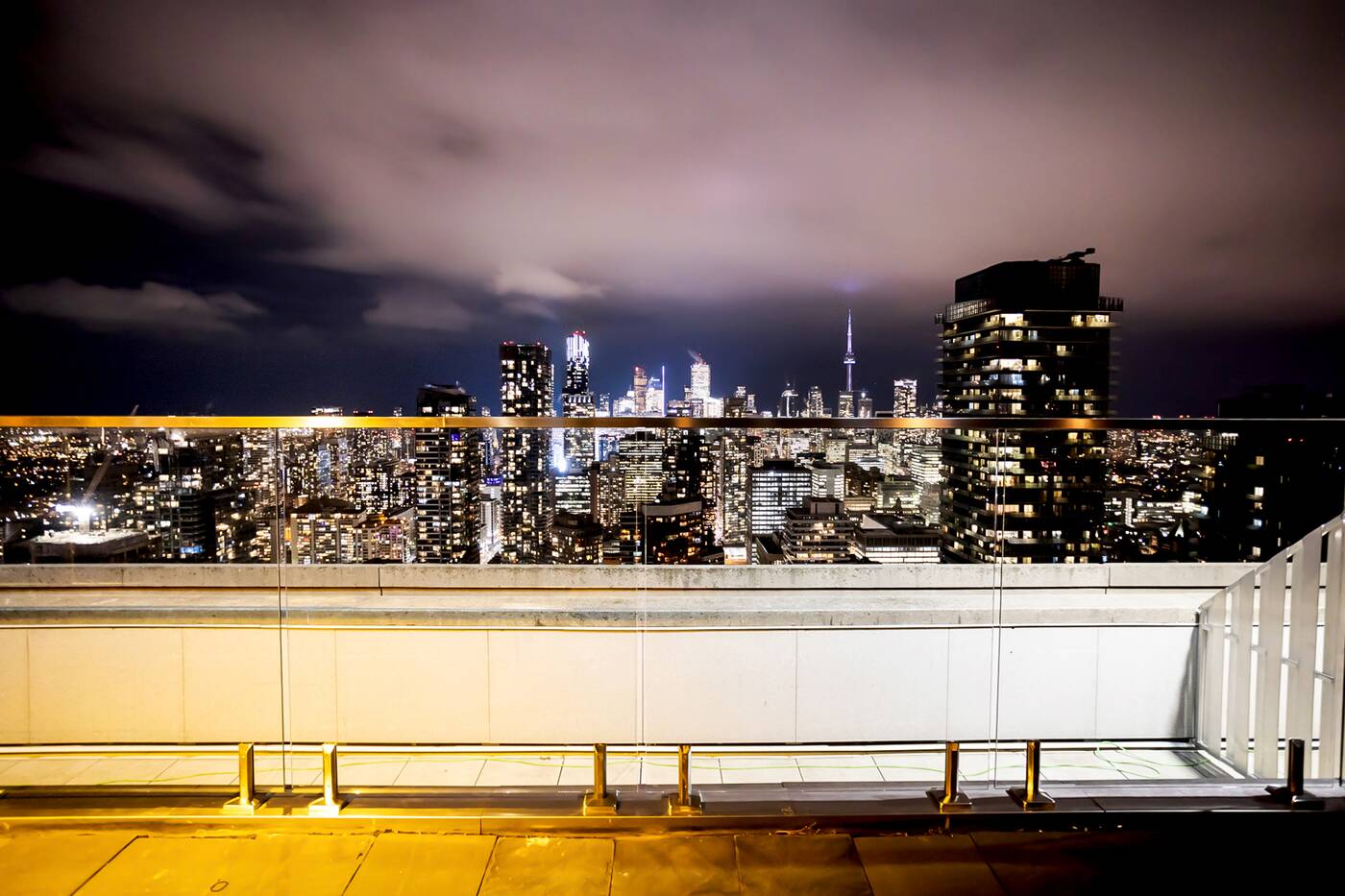 AP is located on the top floor of the Manulife Centre.