There are so many good things to eat in Toronto every single day, but how to choose? Our adventurous staff have tried it all, so every month I'm asking what stuck out on the menus of restaurants they've tried.

Here are some of the best things we ate last month in Toronto.

Director of live content Kris Pangilinan stayed in touch with his Filipino roots this past month by dining on pork isaw (pork intestines) at Eskenita Foods.

"I recently visited my homeland and had grilled chicken and pork intestines almost every day. Something about the way the intestines are charred over a grill and then dipped in spiced vinegar just hits the spot and brings me right back to the Philippines," says Pangilinan.

"Eskentia Foods gave me the same feeling. They have different types of Filipino barbecue skewers and street foods that brings me back to the streets of Manila. Chicken isaw (intestines) can't be found in Ontario due to food safety concerns, however, the pork isaw satisfies my craving when I feel homesick."

He recommends dipping the skewer in vinegar for a sour and spicy taste combination and pairing it with a cold beer while hanging with friends.

In search of coffee that would meet his high standards, reporter Jack Landau ended up at The Social Blend where he was surprised by some mind-blowing macarons. 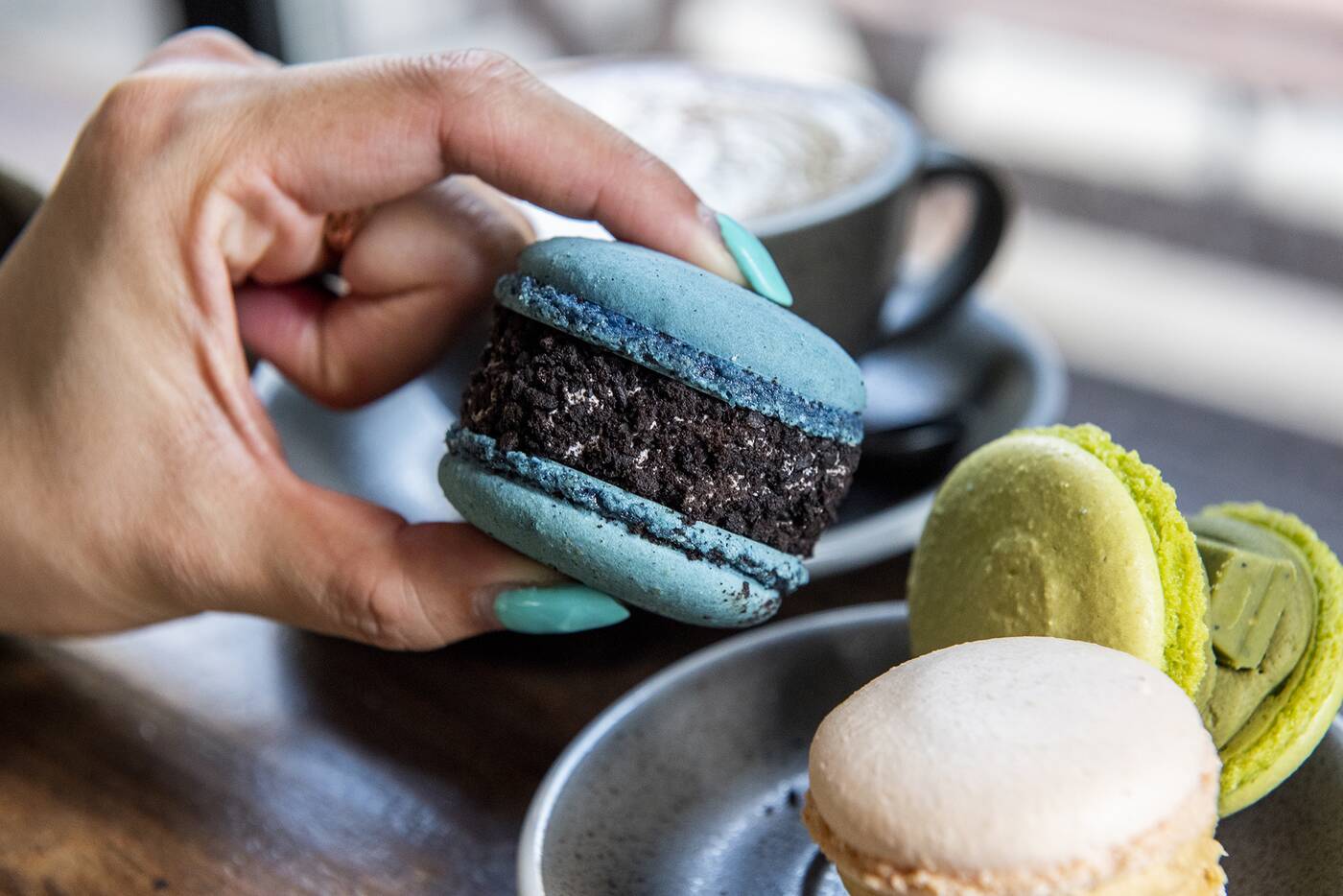 Korean macarons are very different from French ones at The Social Blend. Photo by Hector Vasquez.

"If you think the French are indulgent, these Korean confections take the macaron to another level with generous applications of rich buttercream icing and daring flavour combinations," says Landau. "The Oreo flavour is perfection, but if you want to get a bit more traditional, they offer flavours like matcha KitKat and Korean-style injeolmi rice cake."

Video host Taylor Patterson was blown away by the BAE Burger with two six-ounce patties, beef bacon and cheddar cheese when he visited Burgers on Fleek. It was his first experience with beef bacon on a burger and he was impressed.

"It's aptly titled because you're going to want to order this before anything else," says Patterson.

Last month, reporter Sabrina Gamrot tried out the lunch special at the iconic Chick-N-Joy, which comes with two pieces of fried chicken, fries, their signature yellow gravy and a drink. 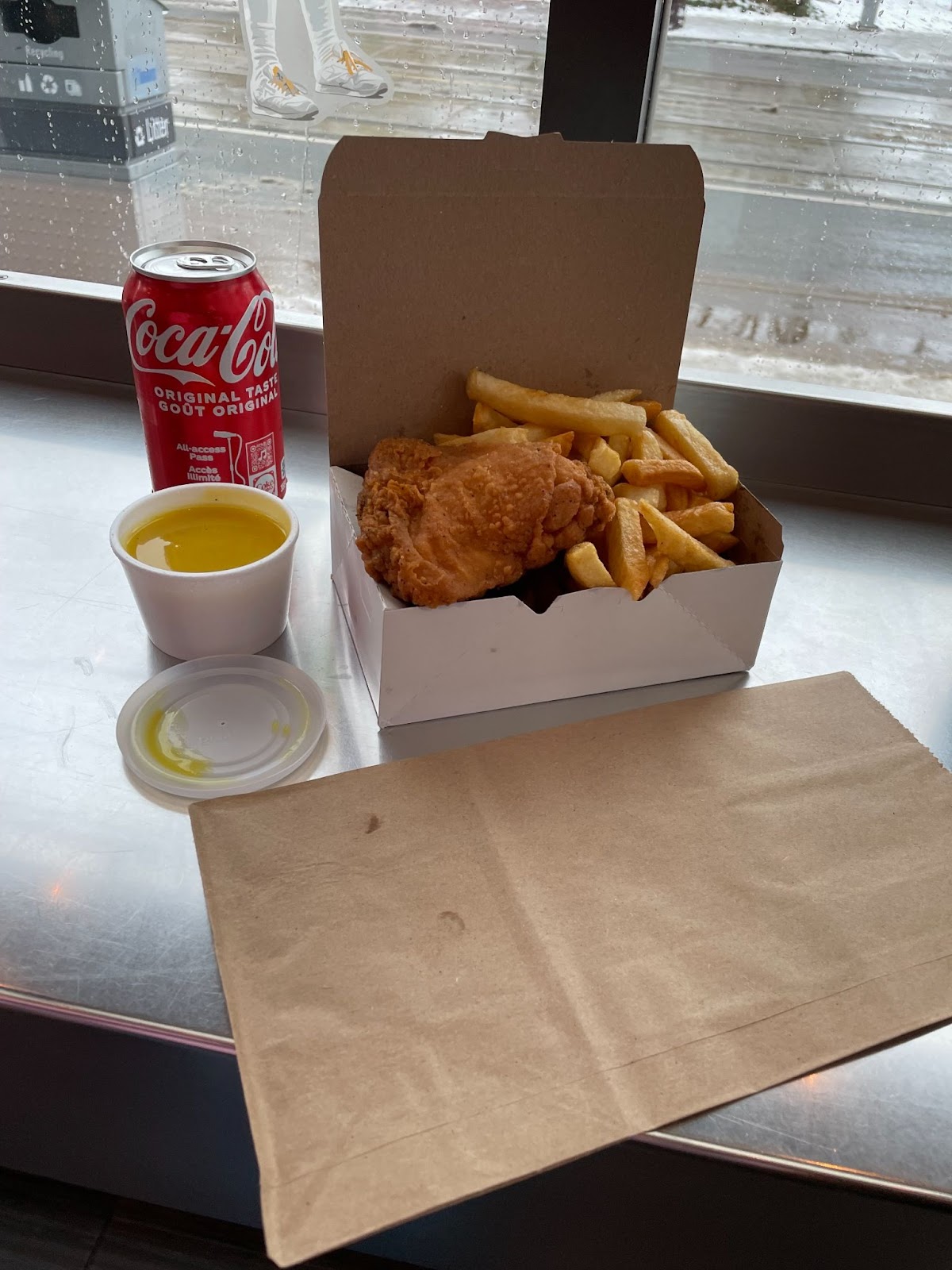 "Delicious chicken, very tasty seasonings and gravy were A1," says Gamrot. "Warmed us up on a cold, rainy day."

Though Ryu Izakaya is more known for its tapas offerings, social videographer and editor Anton Wong found an entree-style option on their menu that really stood out.

"The mentaiko shrimp udon was so good I have to talk about it," says Wong. "With tiger shrimp and creamy yet spicy udon noodles, this was easily my favourite dish. And I ate a roll with wagyu beef and gold flakes that same night!"

Must be some mighty good udon.

Travel writer Meg Cossmann decided to hit up Momofuku in Toronto before they close down for good at the end of the year, and she wasn't disappointed. 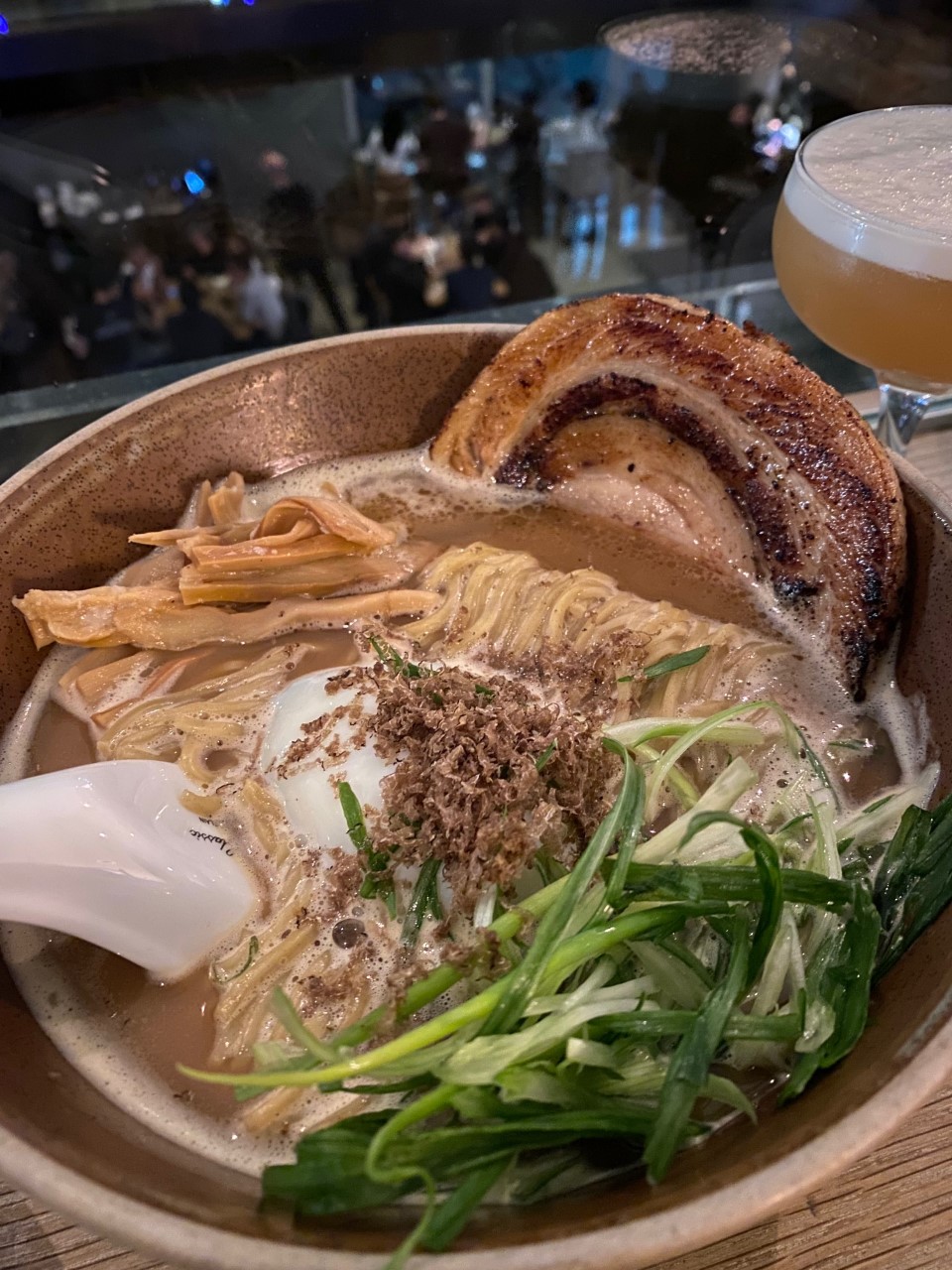 "Before closing up shop, Momofuku brought back three of their most-loved dishes. I can see why the truffle ramen made the list," says Cossman. "The broth was savoury and flavorful and the slice of chashu soaked it up perfectly, complete with black truffle shavings on top."

When food editor Renee Suen was lucky enough to dine at Michelin-starred Alo last month, out of all 11 courses on the tasting menu, there was a deceptively simple-sounding dish called "sunchoke" that stopped her in her tracks. 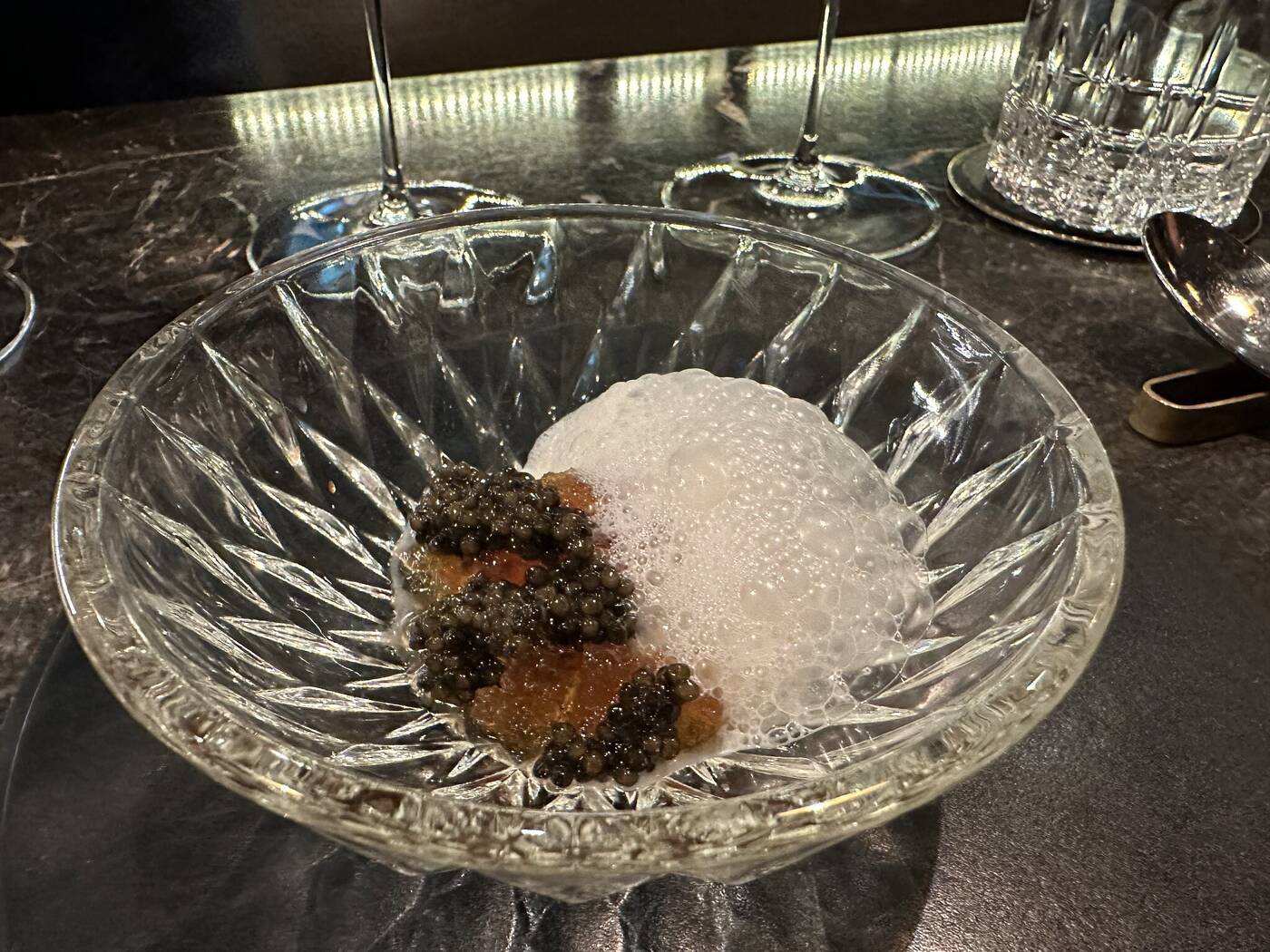 "The dish featured a loose bed of gelatinized smoked ham hock stock that was blanketed by a frothed sauce made with sunchoke milk (AKA the liquid strained from the pureed tuber) that had been emulsified with hazelnut oil," says Suen of the menu that featured a parade of riches with quality ingredients like truffles, uni, and wagyu.

"The toasty sweet, airy light and umami-packed dish was then christened with three fat lines of Ossetra caviar. To be really honest, I'm a sucker for good caviar but this harmonious combination took those flavours and that luxury ingredient to the next level. It was a Viennese waltz in my mouth!"

Veggie lover and news editor Lauren O'Neil thinks there's one place in town where the hummus is "unparalleled," and that's at Parallel, where she had this dip that's more of a full-on dish. 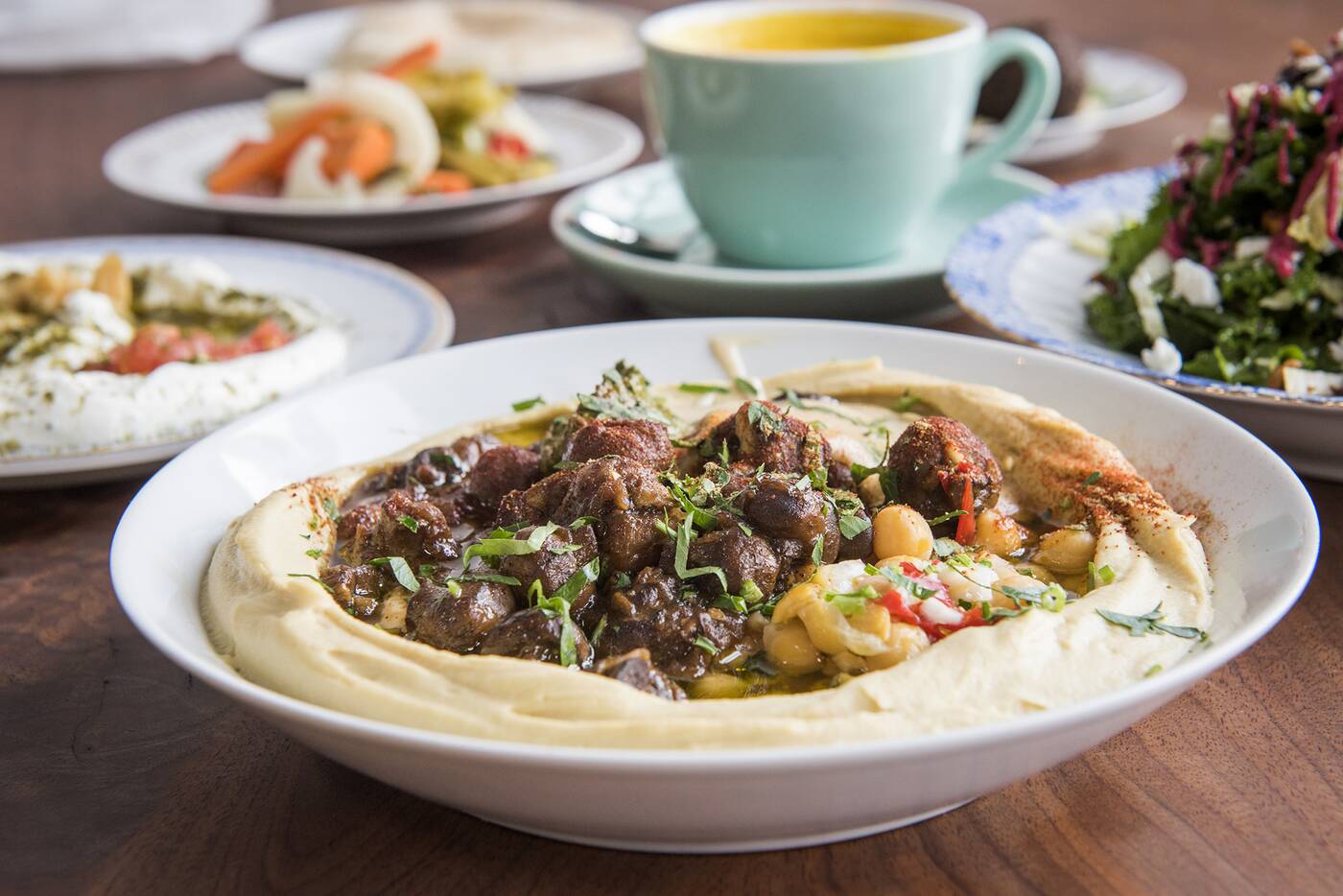 Truffle takes the hummus at Parallel to the next level. Photo by Hector Vasquez.

"Highly recommended with pita or, if you're like me, celery and carrots. You can buy either of these bowl-to-mouth transportation vessels with the hummus. Also great are the unique green falafel at Parallel. Trust me. They're dope."

Social video reporter Tiana Jayatunga is a sushi lover at heart and confessed that she was initially only interested in the sushi platters offered at Flame Sushi on Queen West. Instead, she was surprised by another item on the menu that wasn't listed in the sushi section, the puffy chicken wing.

"Let me just clarify that this is no ordinary chicken wing, it is actually a fried chicken wing that is stuffed with shrimp and - wait for it - foie gras!" says Jayatunga.

"The puffy chicken wing is crispy on the outside, juicy on the inside, and bursts of flavour from the hidden shrimp and foie gras that I wasn't expecting. I don’t know how they do it, but they seem to have some magic up their sleeves. I’ll be heading back for sure."

As for myself, I was lucky enough to snag a reservation at the pricey and always-booked Prime Seafood Palace last month, Matty Matheson's latest upscale restaurant venture in Toronto.

The steakhouse-style menu is dizzying, but since "prime" is in the name we had to order the prime rib. 12 ounces of the sliced prime rib roast here comes soaking in a sauce of its own juices, but to make it even more luxurious we paired it with a rich bearnaise sauce.

An honourable mention goes out to the grilled seafood boudin with Swiss chard and lardo that almost comes off like a kind of sushi thanks to being wrapped in the green vegetable.