The space resembles that of a giant cozy loft in the middle of New York City, with couches for lounging, pool tables and a full stage set up for nightly performances. 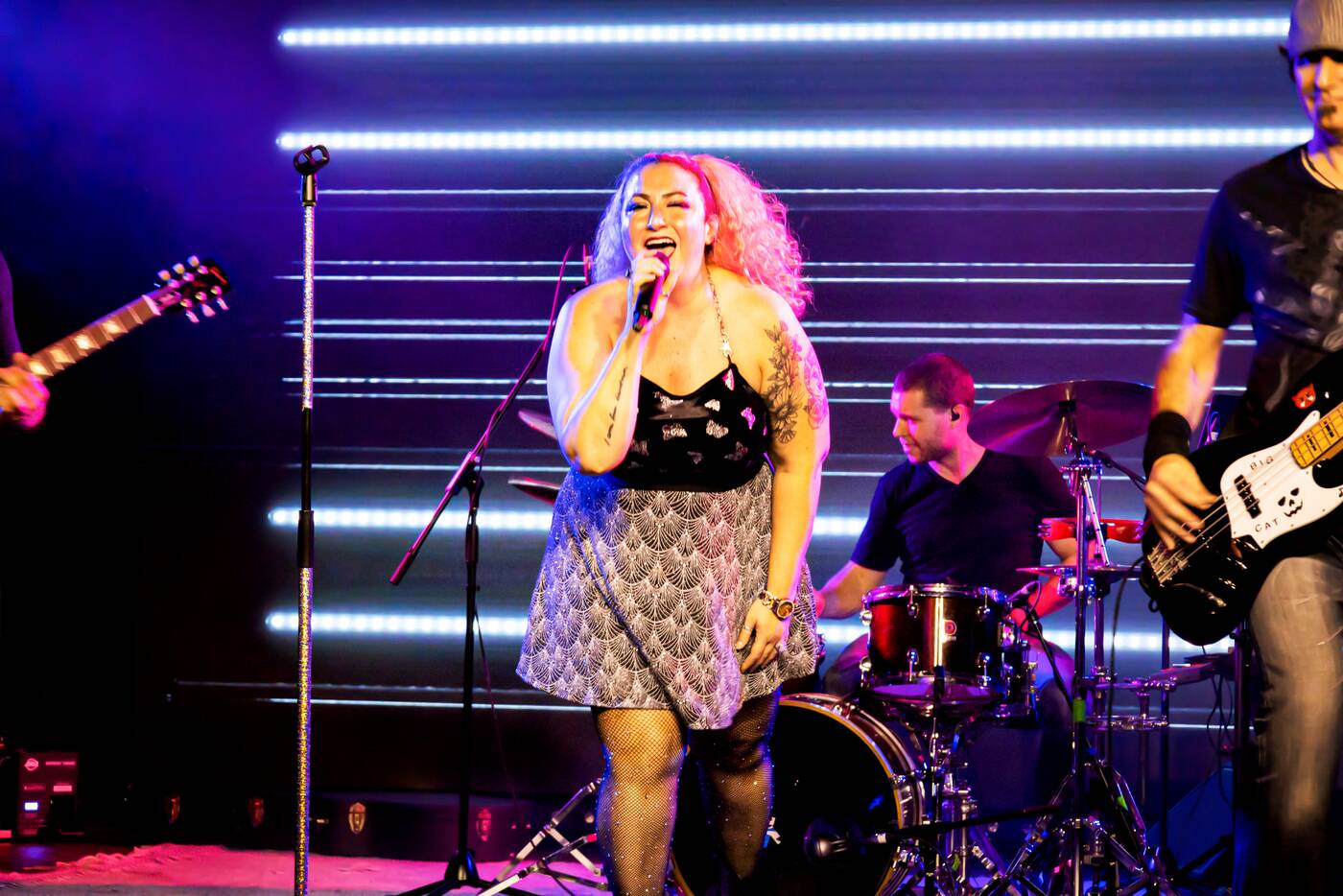 Black Pearl was created to serve many purposes, whether that be stopping in for an after-work drink, celebrating milestones with friends, or having a fun date night. 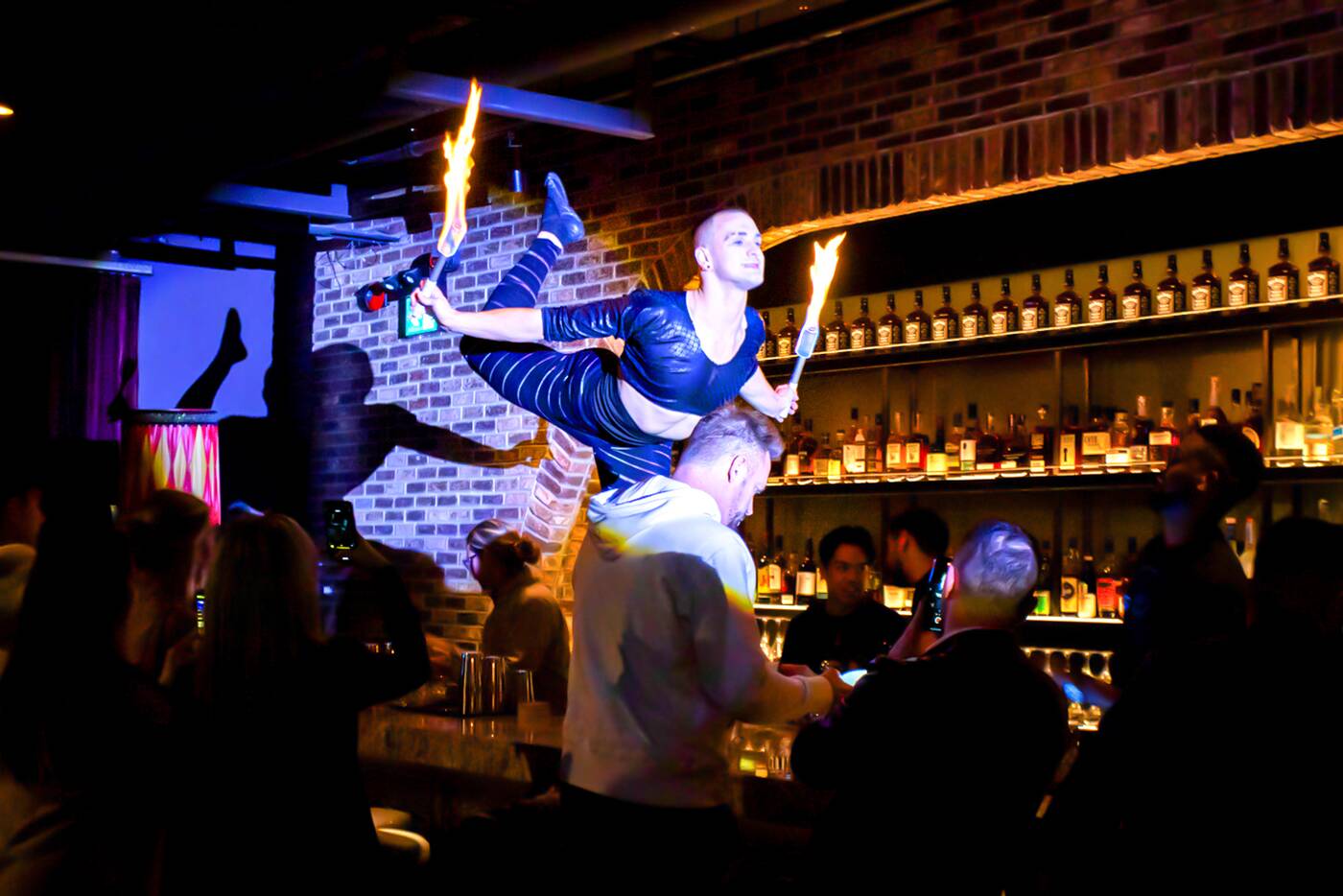 Scale Hospitality's owners and industry veterans Hanif Harji and Terry Tsianos envisioned Black Pearl as an alternative place to go to after dinner when you don't want to end the night at a club. 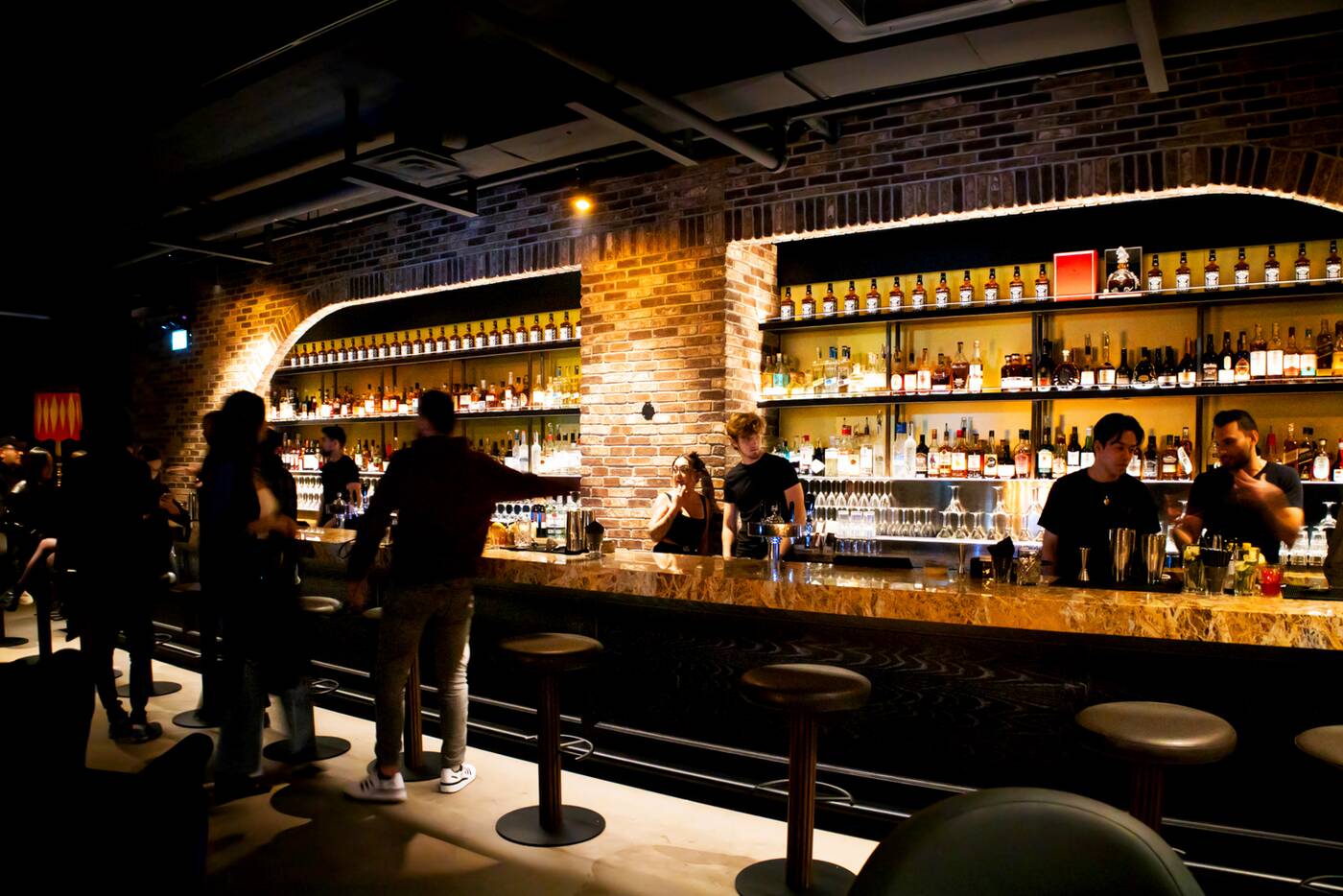 The spot is geared towards those who enjoy live music without being crammed inside of a concert stadium.

Unlike similar venues, you won't need a reservation, nor is there a dress code. 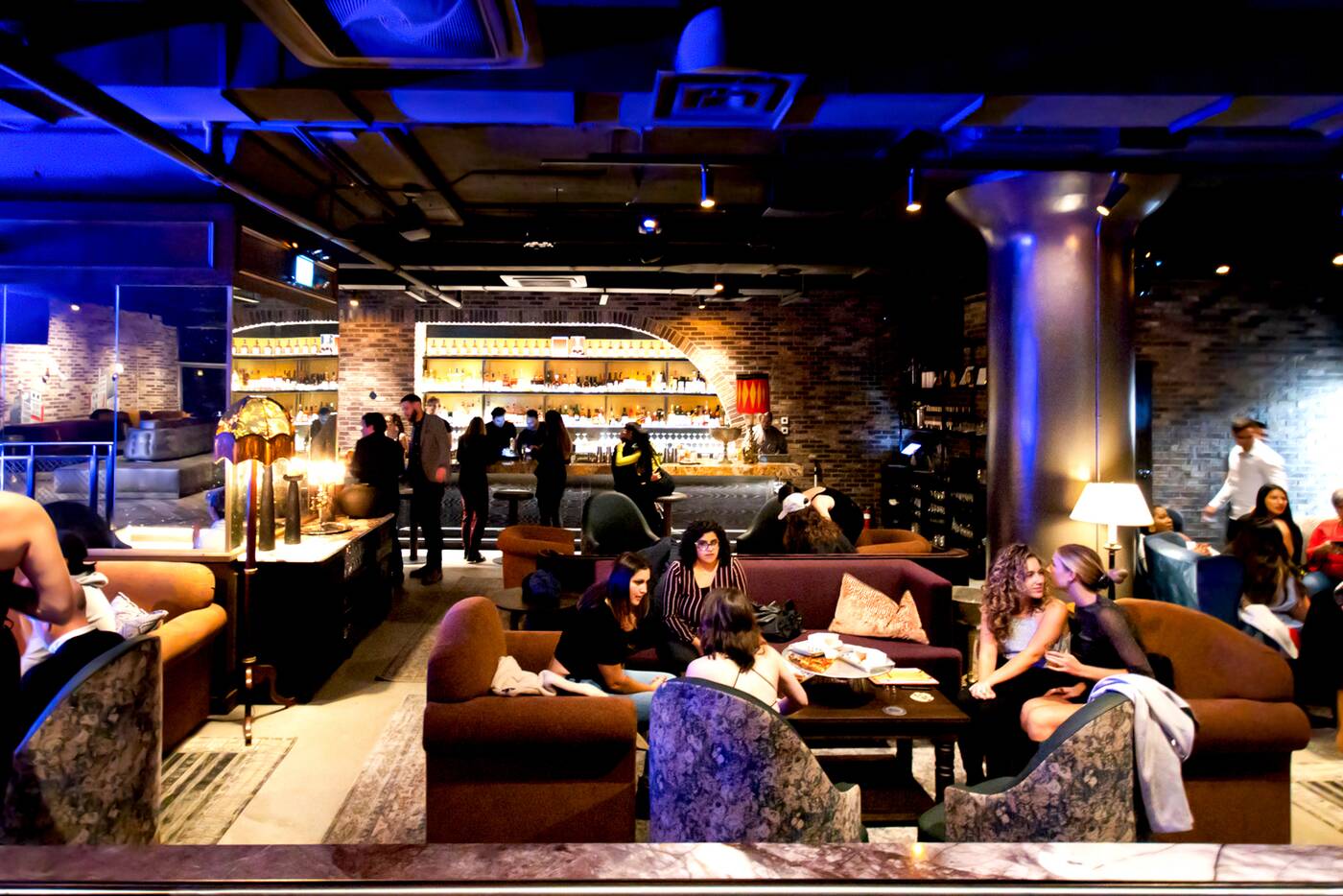 The first thing I take in is Black Pearl's vibe. Stepping into the former Tequila Jacks space is now like entering into an elevated version of a retro rock star's living room. 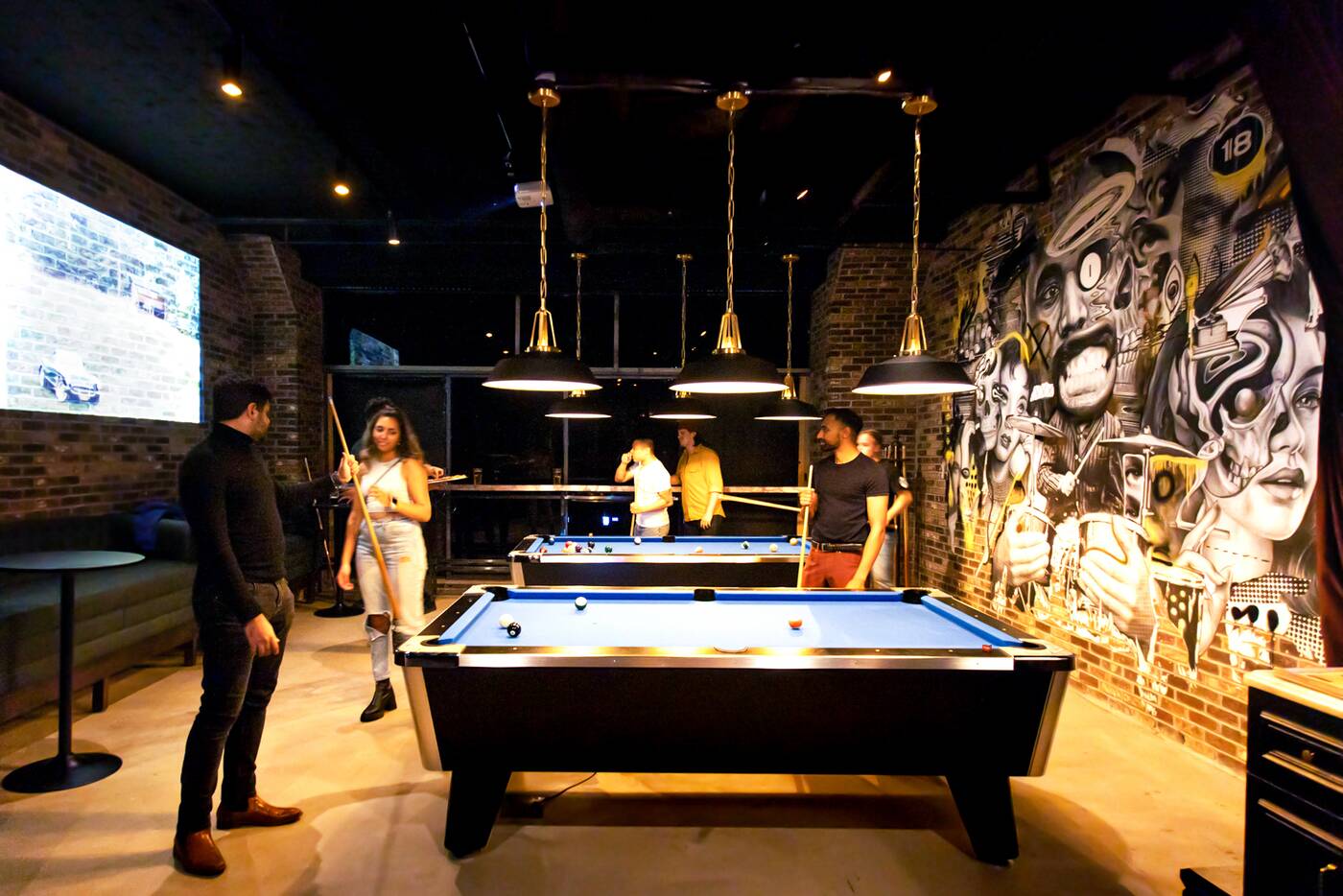 There's an area near the entrance away from the stage that has several pool tables. One wall has classic movies from the 80's like Dirty Dancing projected high on it; the wall opposite to that features a giant mural of blended faces and skulls. 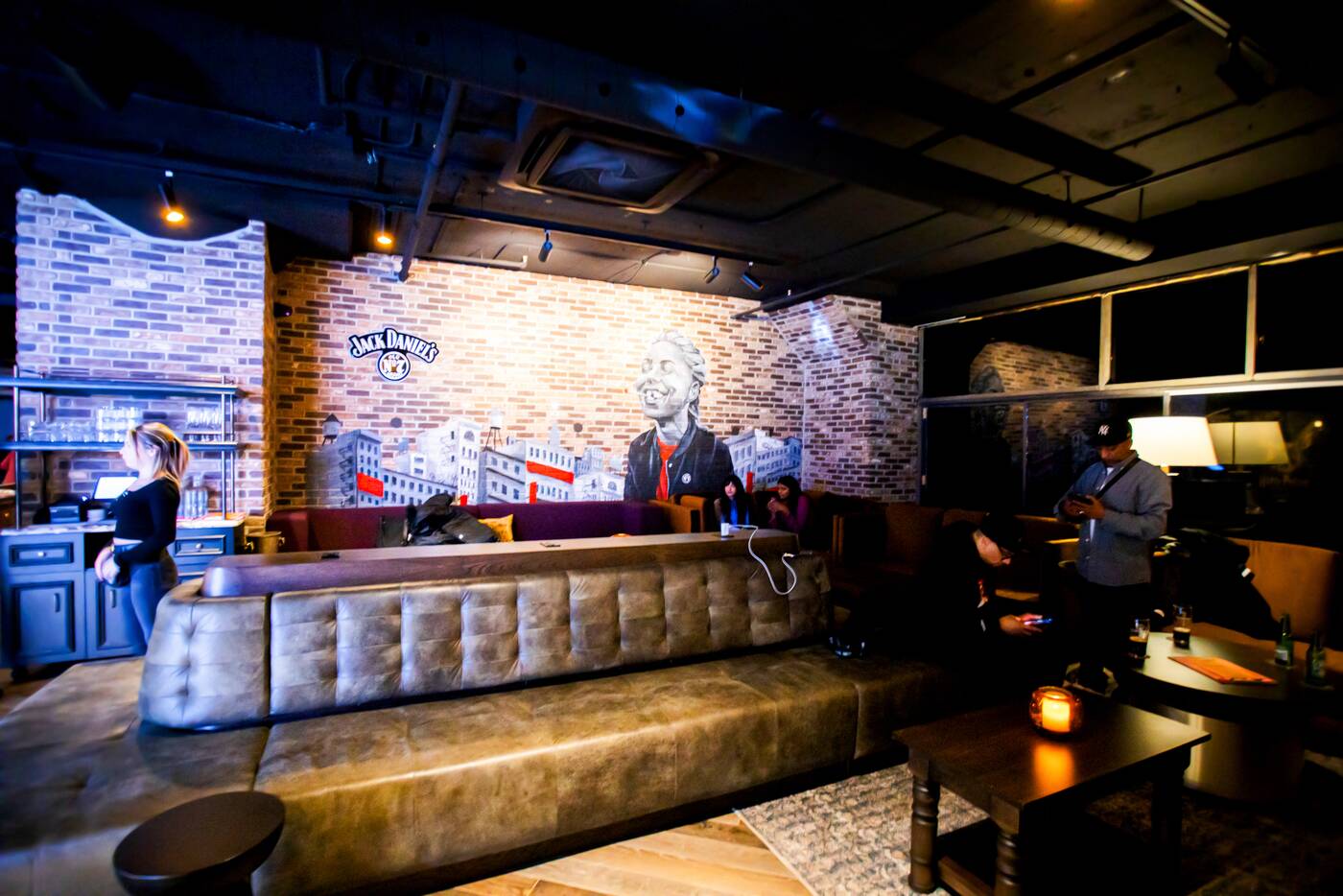 There's another seating space located on the left side of the stage with more brick and an oblong leather couch. This is where you want to be if you want to jam out to the music but not feel a need to make conversation. 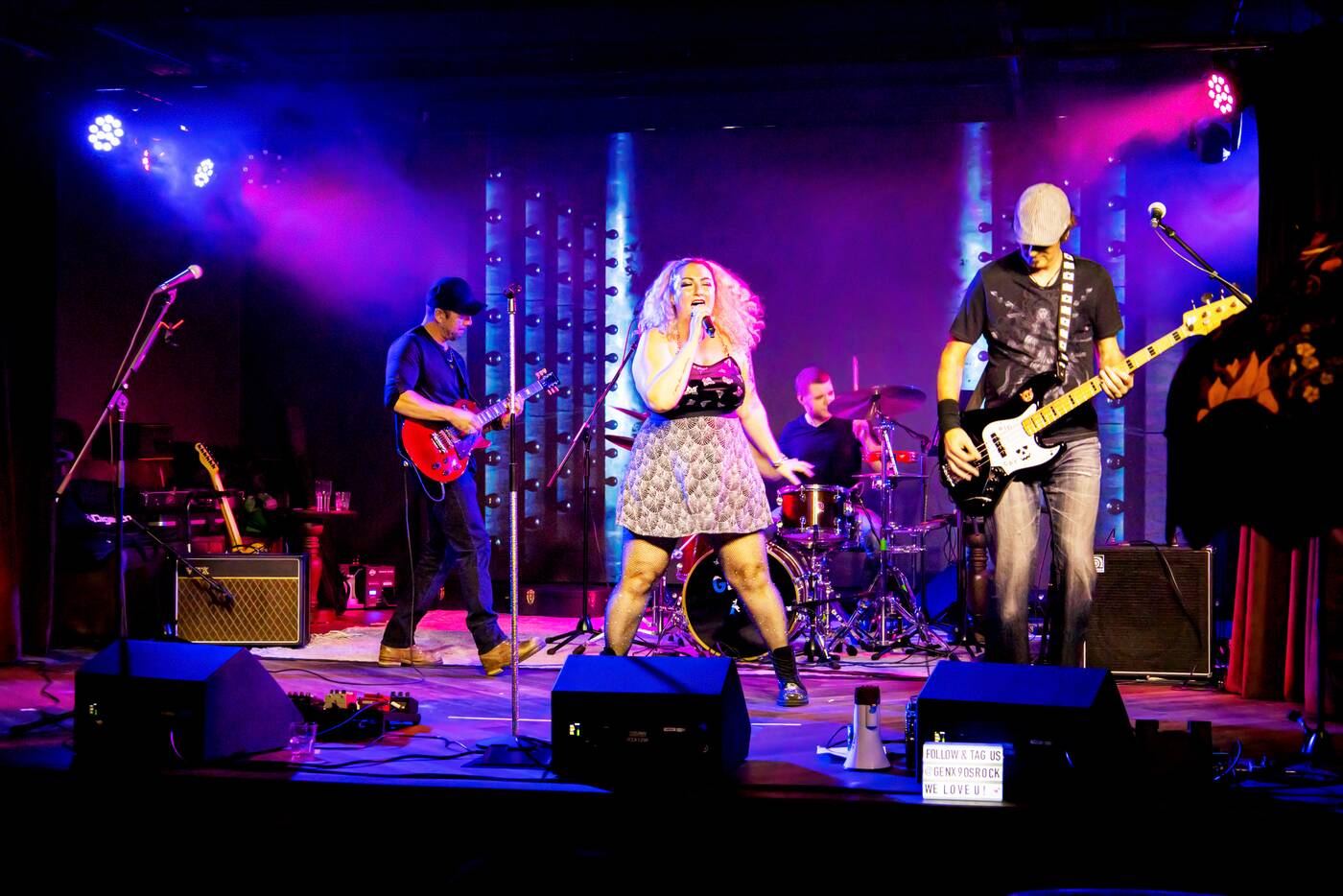 Behind the stage is a 16 x 19-foot wall that displays graphic backgrounds while the band plays. There's an array of stage lights that reflect off the stage into where the crowd is seated. 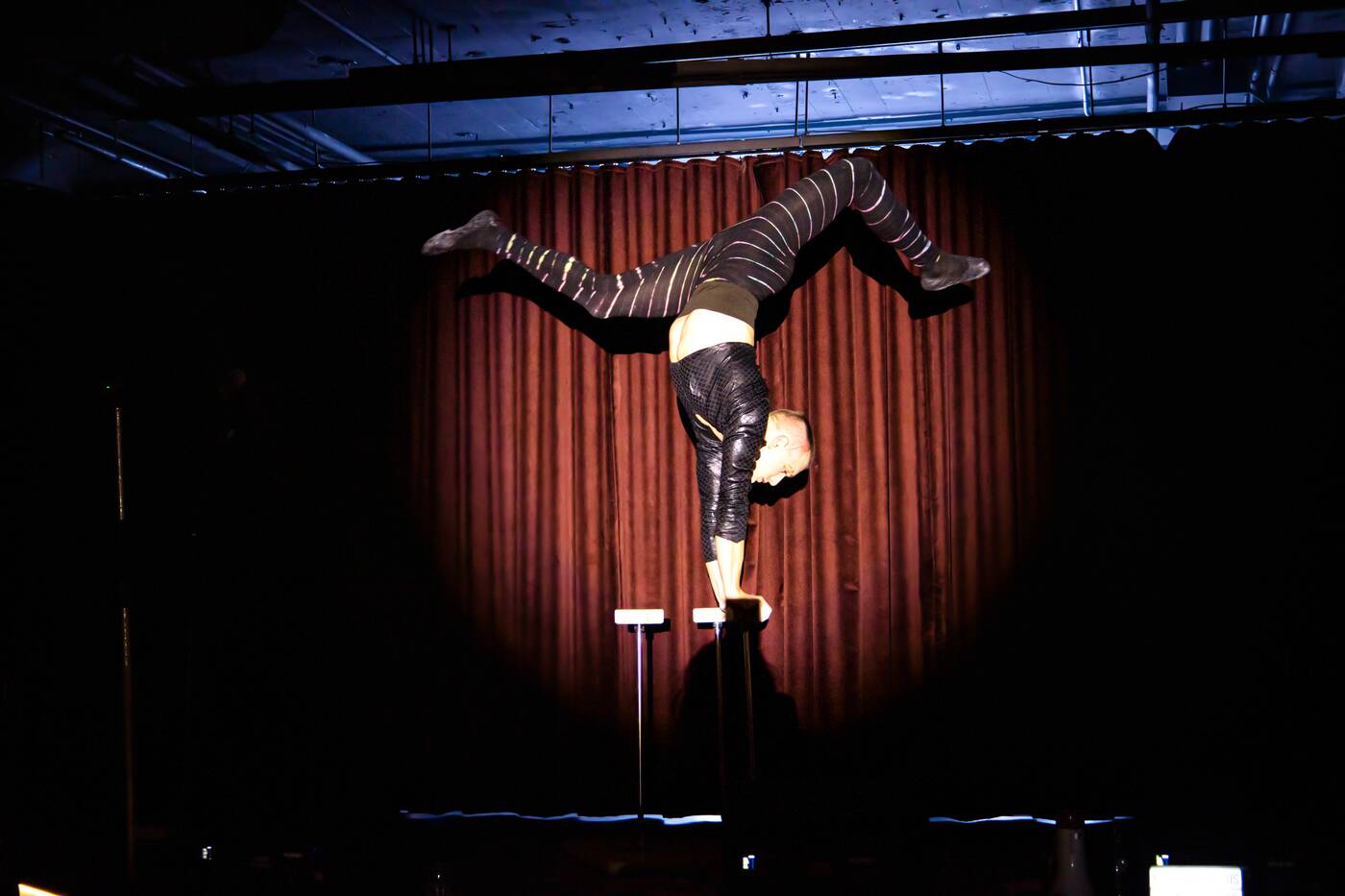 In between the band sets, acrobatic performers grace the stage and take over other areas of the bar.

Music-wise, there's a mix of everything between Wednesday to Saturday starting at 8 p.m. and ending at 2 a.m.. DJ's start off the evening, then live bands come on and DJ's return again to finish the late night jams. 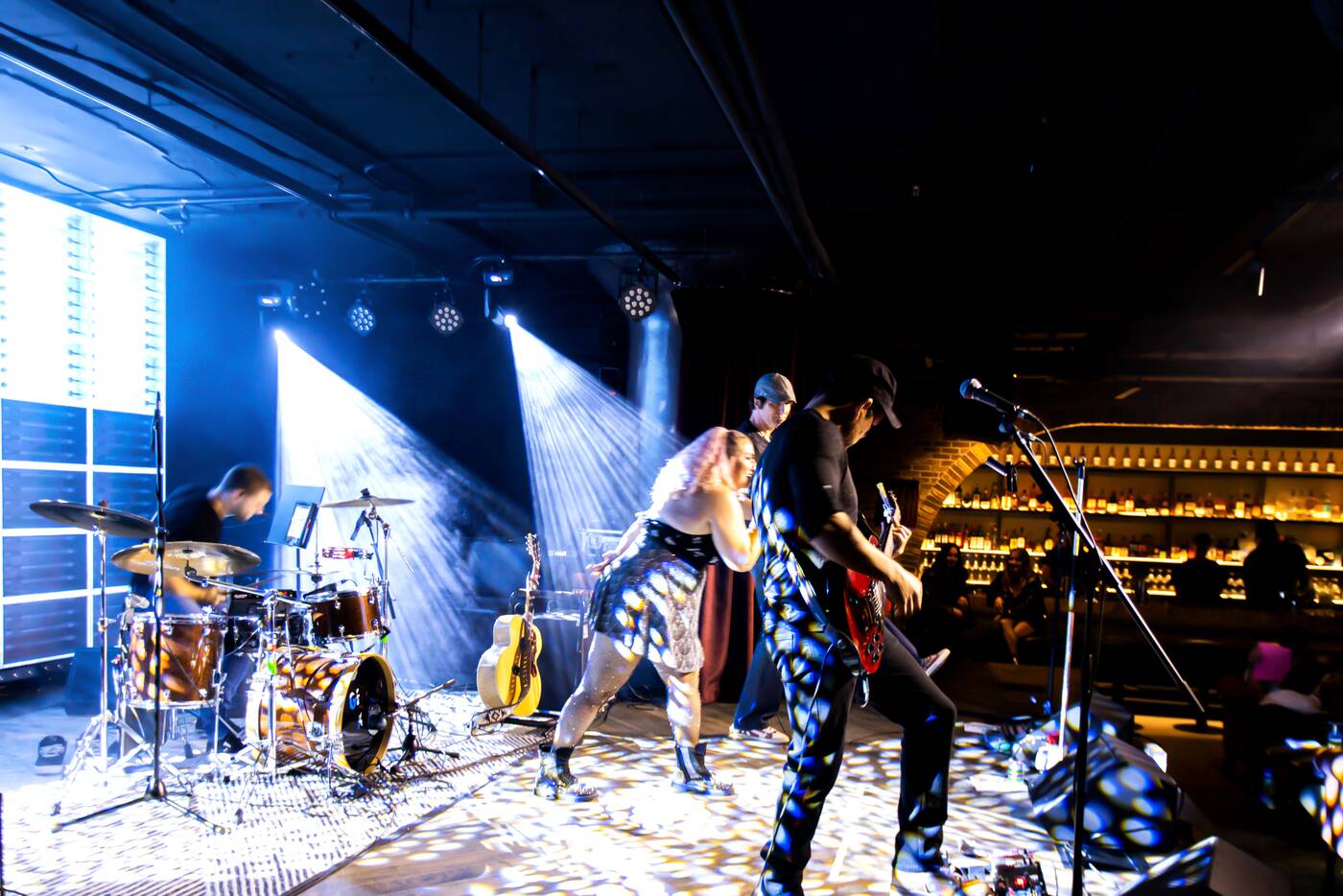 Live music performances start around 8:30 p.m. on Wednesday through Saturday.

Wednesdays feature old-school house and disco. On Thursdays, you'll hear soul, R&B, and hip-hop. Rock and pop music from the 90's and early 2000's happen on Fridays, while old school rock and roll plus hip hop are reserved for Saturdays. 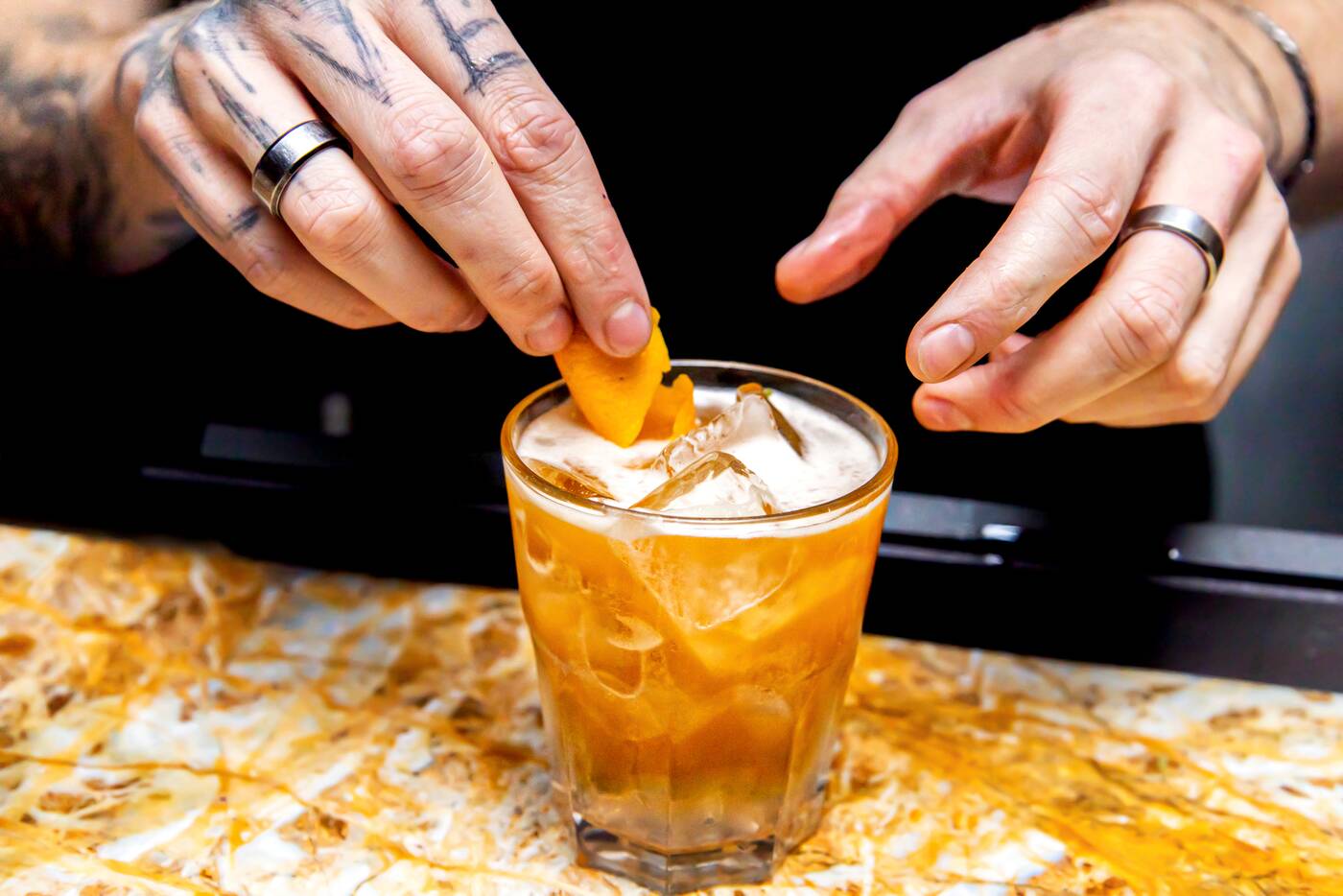 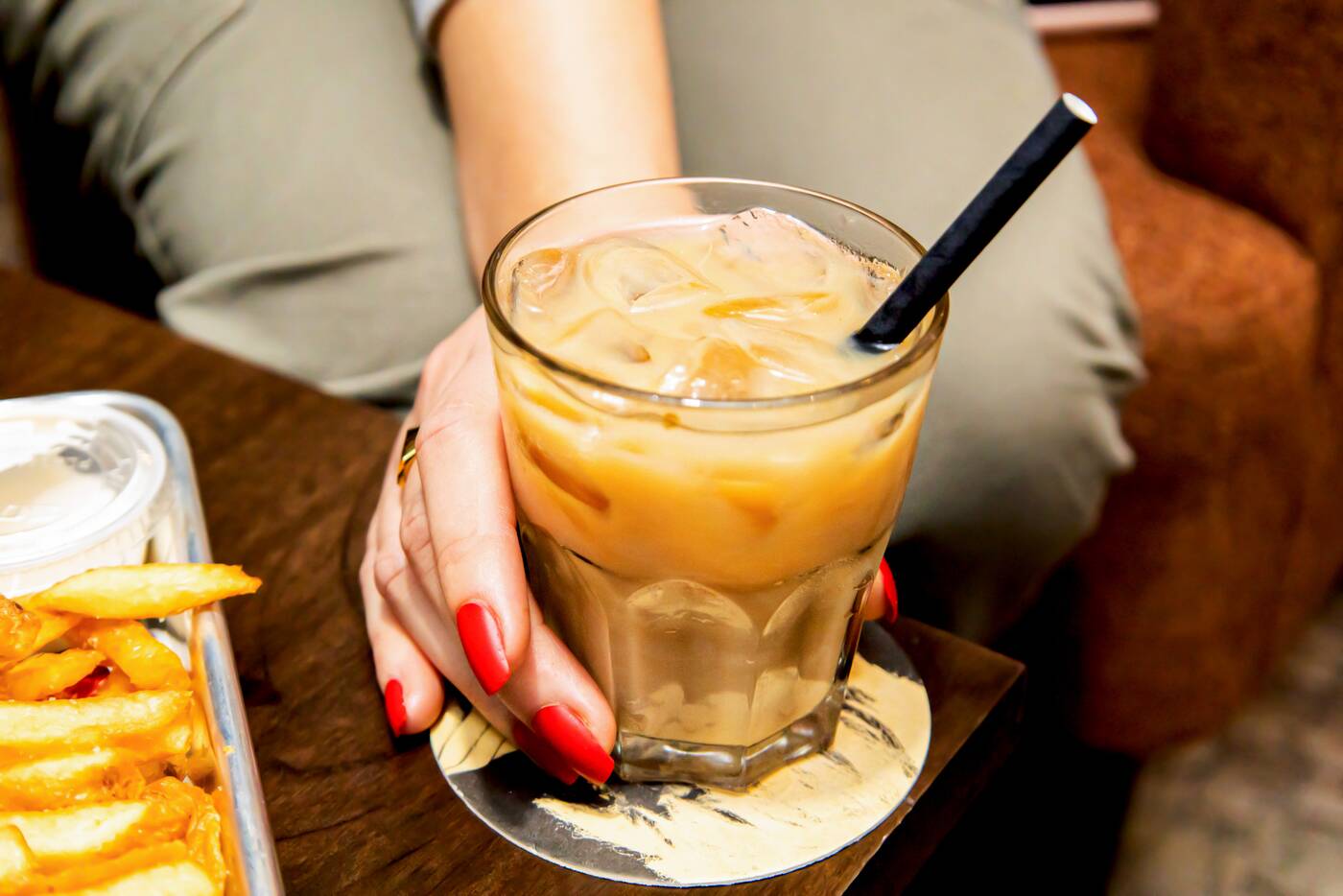 The Shaft ($16) is a casual version of an espresso martini with a story behind it. Shafts are a popular drink at bars in Victoria, B.C. and places out west.

The ritual is to slam your glass down when it comes to the table and sip the entire contents through a straw until the cup is empty.

This cocktail combines Smirnoff vodka, Kahlua, Baileys and espresso which creates this creamy combination that is like an alcoholic iced coffee. 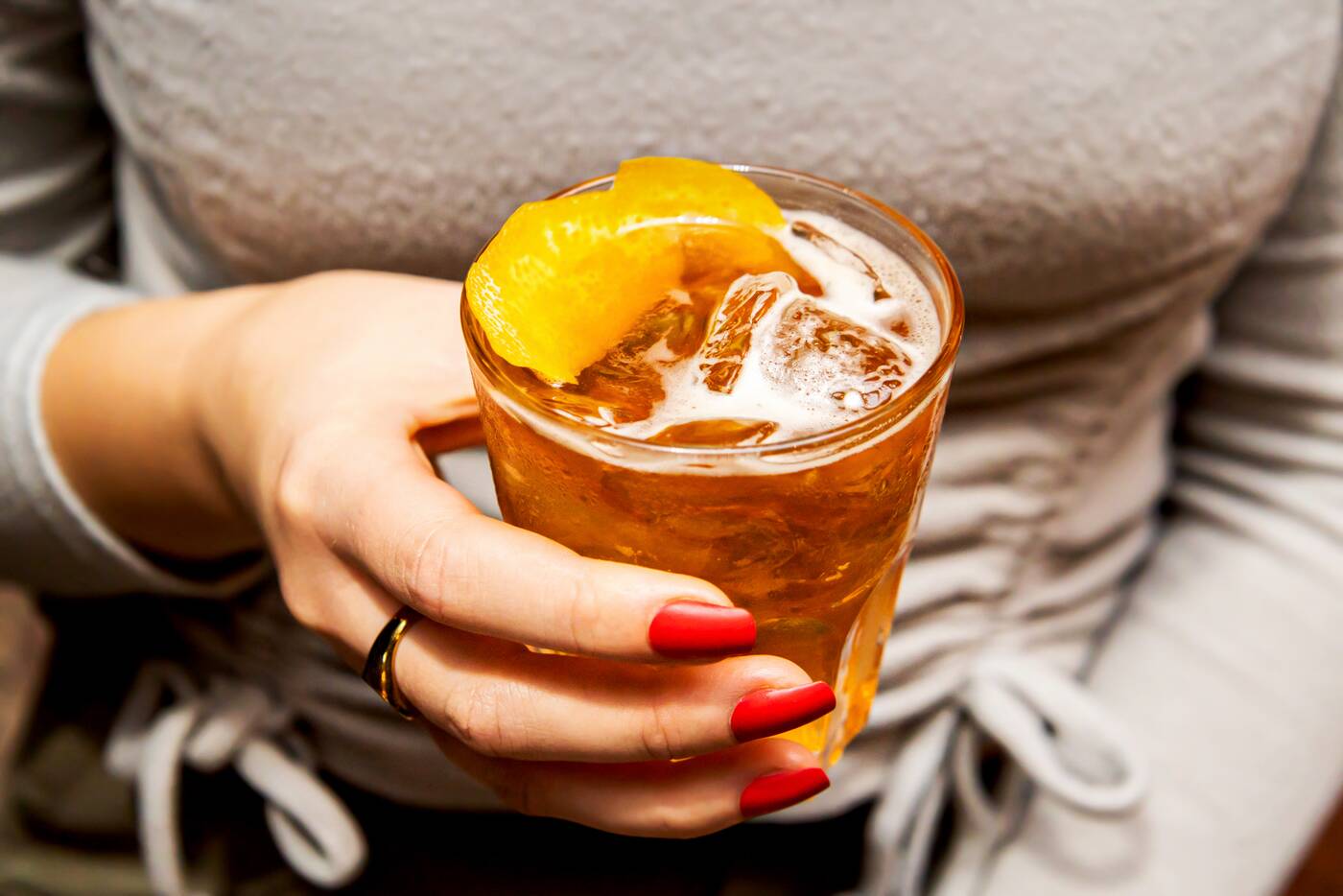 The Alchemist ($19) has an intense smoky flavour to it, which comes from the lapsang souchong tea that's used to make this drink.

In addition to the pinewood smoke that's used to smoke the tea, the drink's smoky flavour also comes from the charred wood simple syrup used.

The boozy drink uses Smirnoff and Chivas Regal whisky and is finished with cherry vanilla bitters. 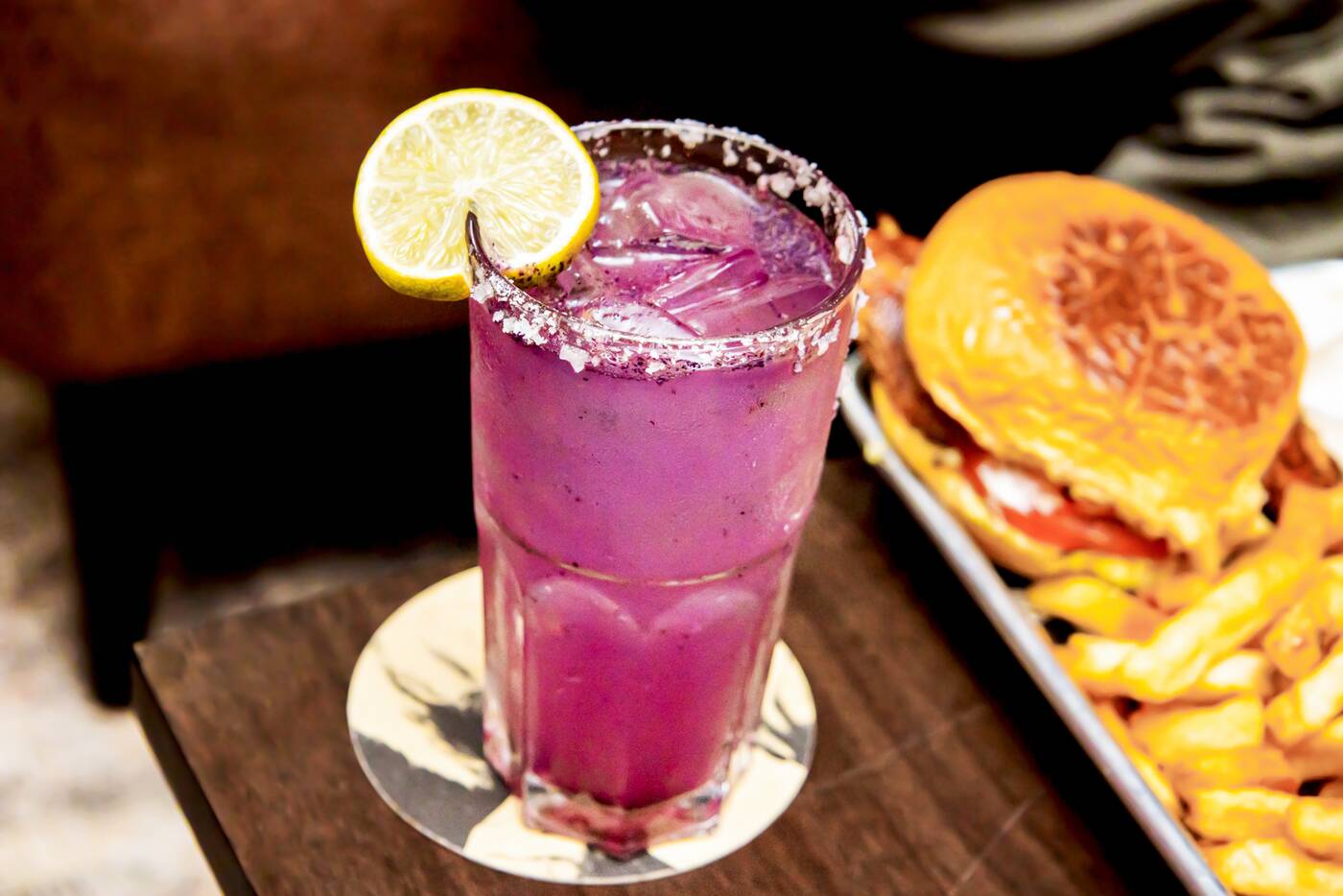 The Purple Haze ($17) is a spin-off of a margarita that combines Cazadores tequila with lime, butterfly pea flower-infused Cointreau, lime juice and agave.

The punchy citrus-flavoured drink is heavily rimmed with salt, which is an incredible combination with each sip. The drink's vibrant purple colour comes from butterfly pea flower and is very Instagrammable. 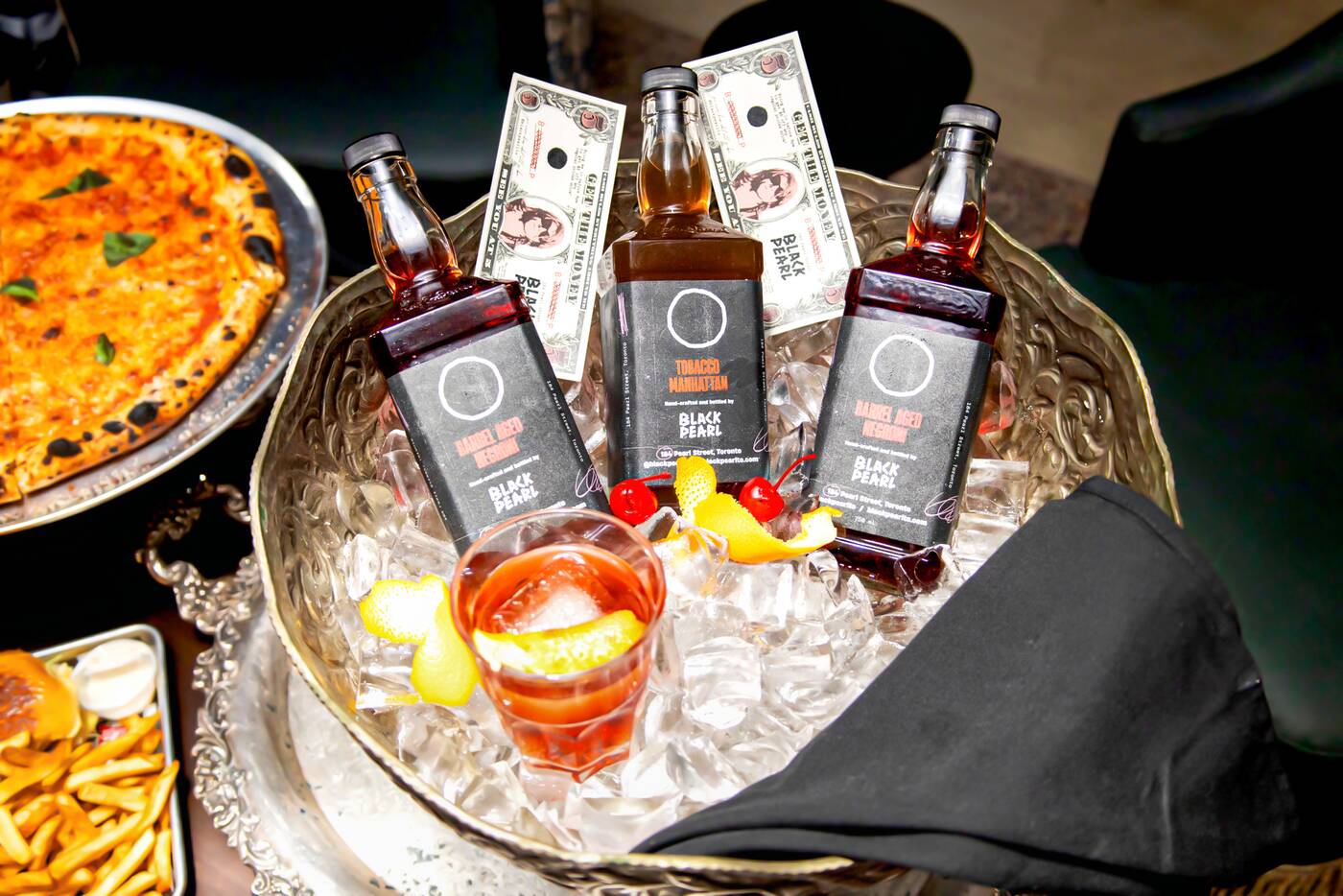 Black Pearl offers bottle service, including personally branded bottles featuring a few of the cocktails they offer on the menu.

The bottled cocktails are served to your table in an antique silver ice bucket and platter with options like a Barrel-Aged Negroni ($170) and Orange-Spiced Old Fashioned ($155). 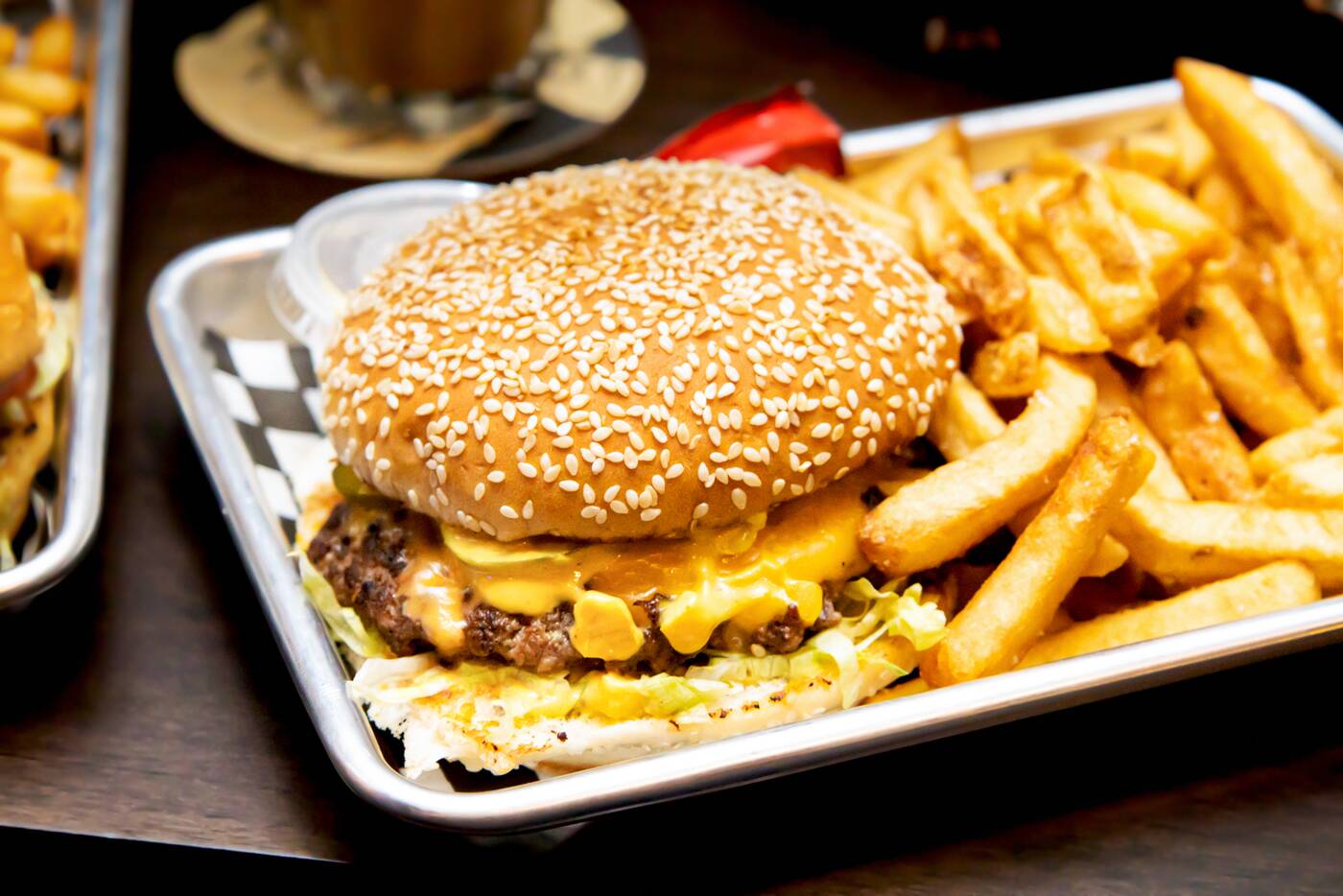 For food, Scale Hospitality's Corporate Executive Chef Ted Corrado is behind the menu. (He also developed the menus at places like the newly revamped Le Select and Bar Chica.)

Corrado describes the food here as playful and approachable saying he took classics like burgers and pizzas and elevated them in taste and quality. 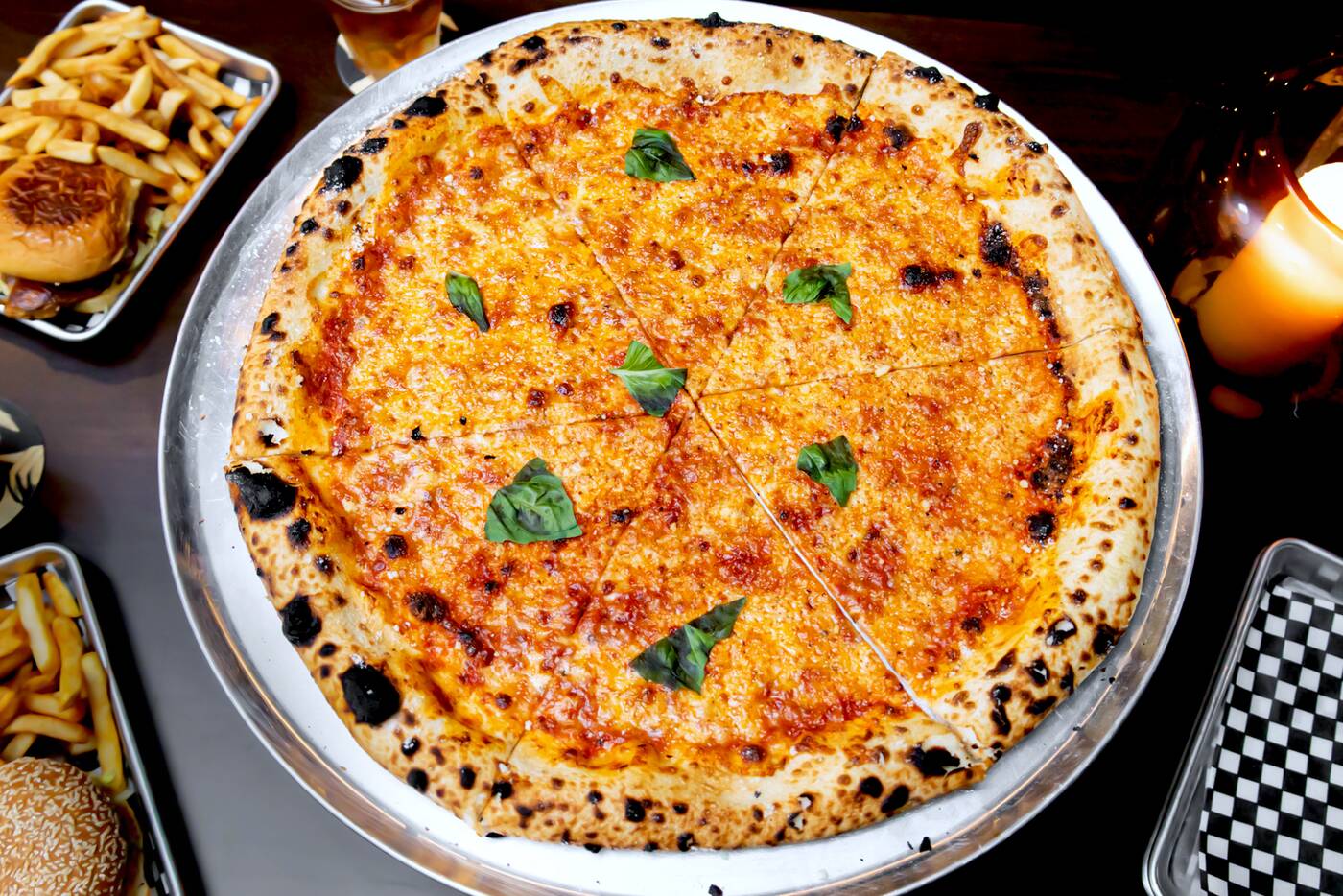 This is evident in their New York-style pizzas. Corrado and the team spent a ton of time making hundreds of pizzas in order to perfect the recipe used in the menu.

The pizza dough uses oat flour and is fermented for up to four days before it's used. I tried the Margherita ($32) which has a sauce made from San Marzano tomatoes, a heavy helping of mozzarella cheese and finished with fresh basil. 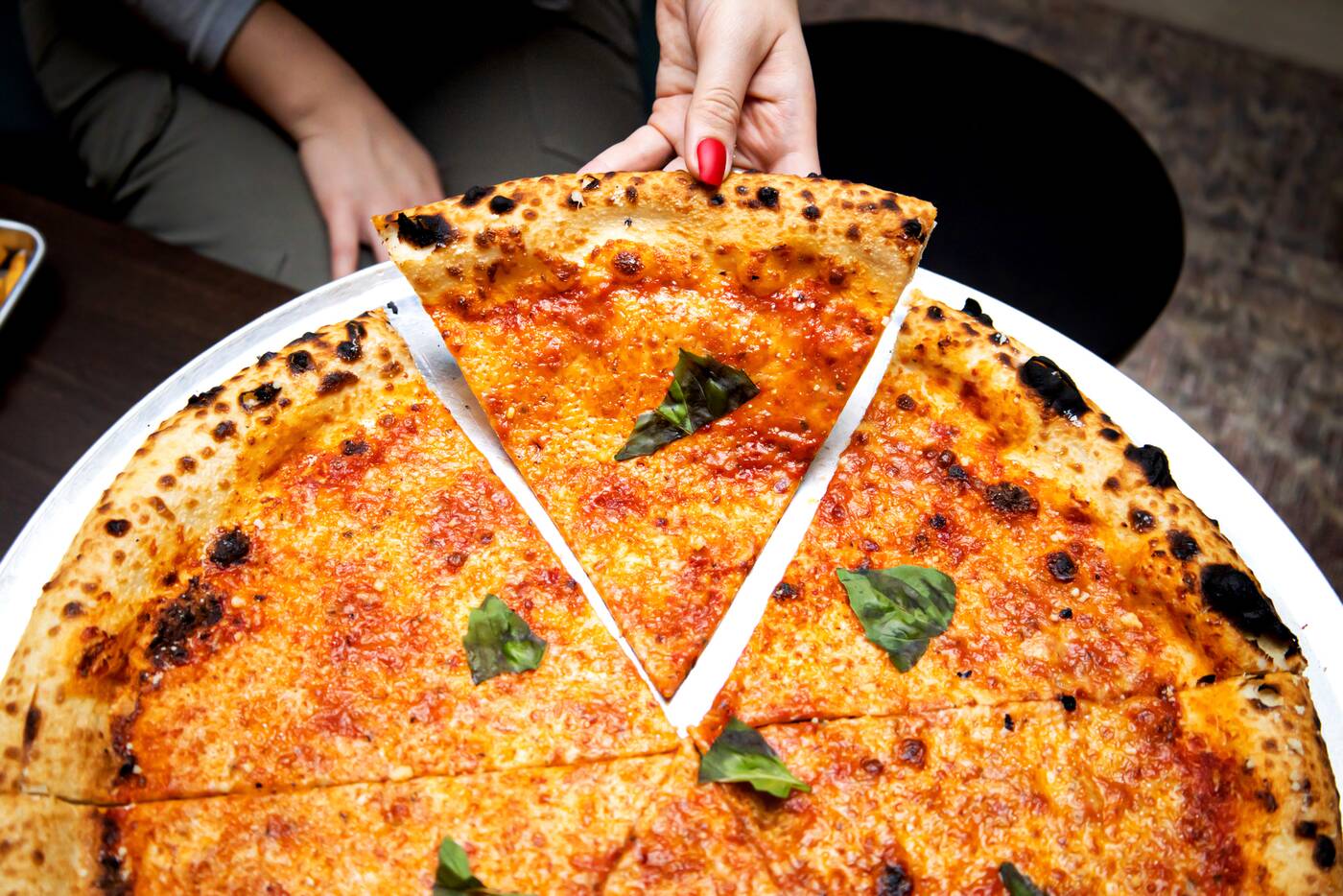 The 22-inch pizza is baked in a Moretti Forni oven from Italy that melts the cheese so that it crisps up on the surface while leaving gooey goodness underneath. The pizza can also be ordered by the slice ($8). 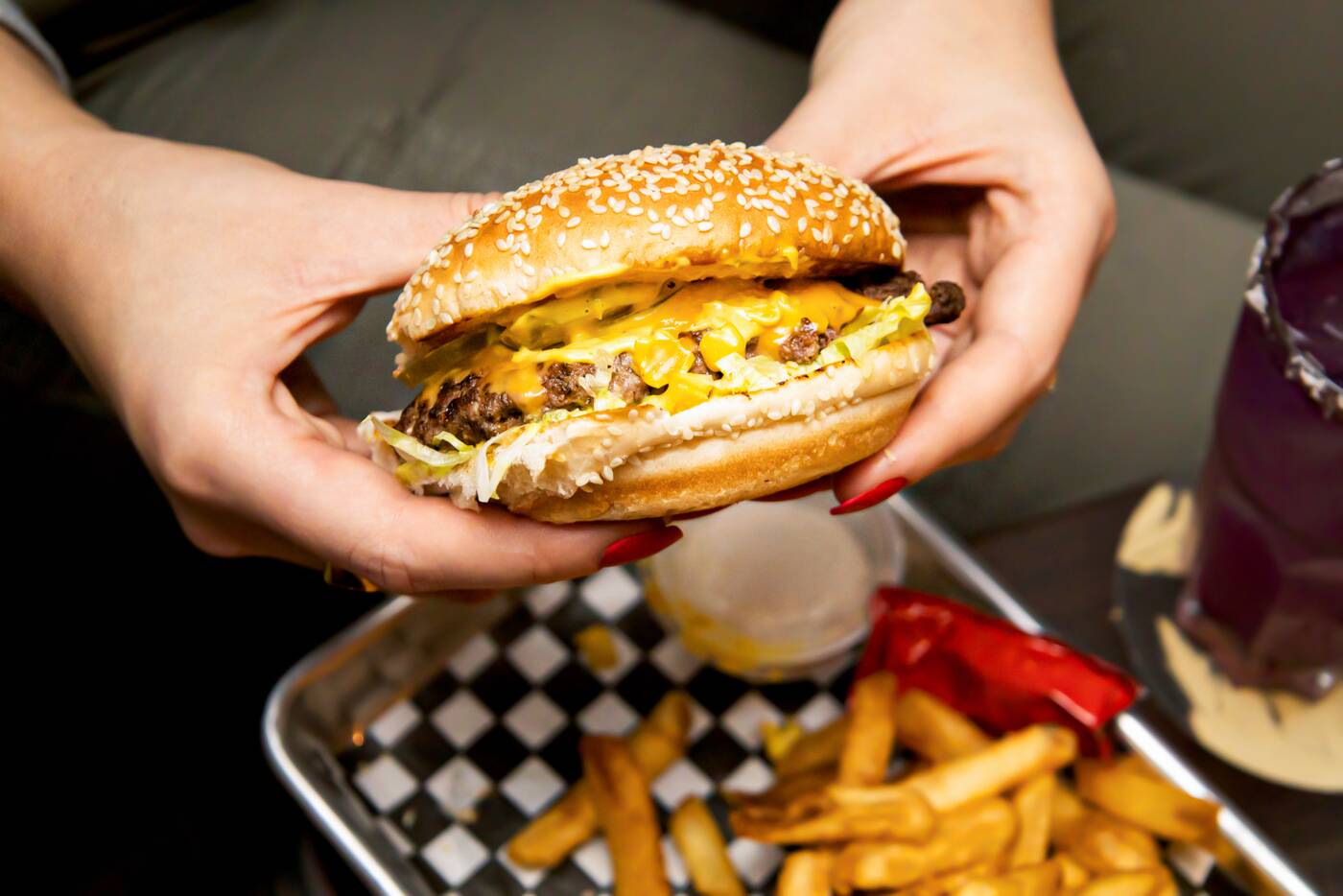 The Cheeseburger ($18) is inspired by the look and taste of a Big Mac,  including the sesame bun.

The beef is a custom mix sourced from Woodward Meats, who sources their products from Ontario farms. The patty is topped with cheddar, lettuce, onion and pickles.

The burger's GG sauce brings all the savoury flavours together and although the recipe is a secret, Corrado tells blogTO it's made from a combination of all the classic condiments. 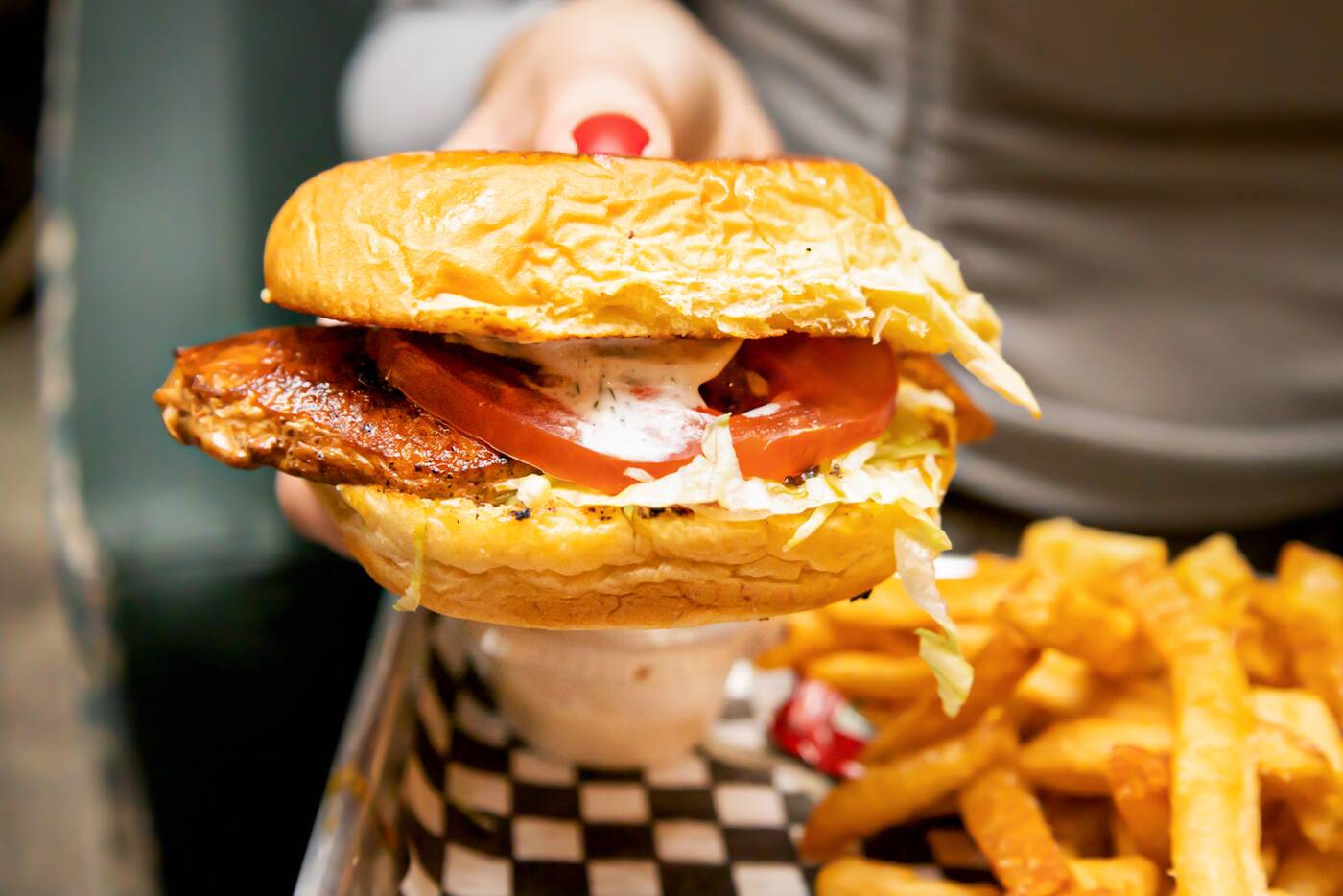 The Grilled Chicken Sandwich ($19) is one of the menu's healthier options and is an option for those who want something lighter than fried chicken.

A juicy grilled chicken patty is covered with tangy chipotle mayonnaise, crispy lettuce, onions and a slice of tomato in a potato bun. The tasty sandwich comes with fries on the side. 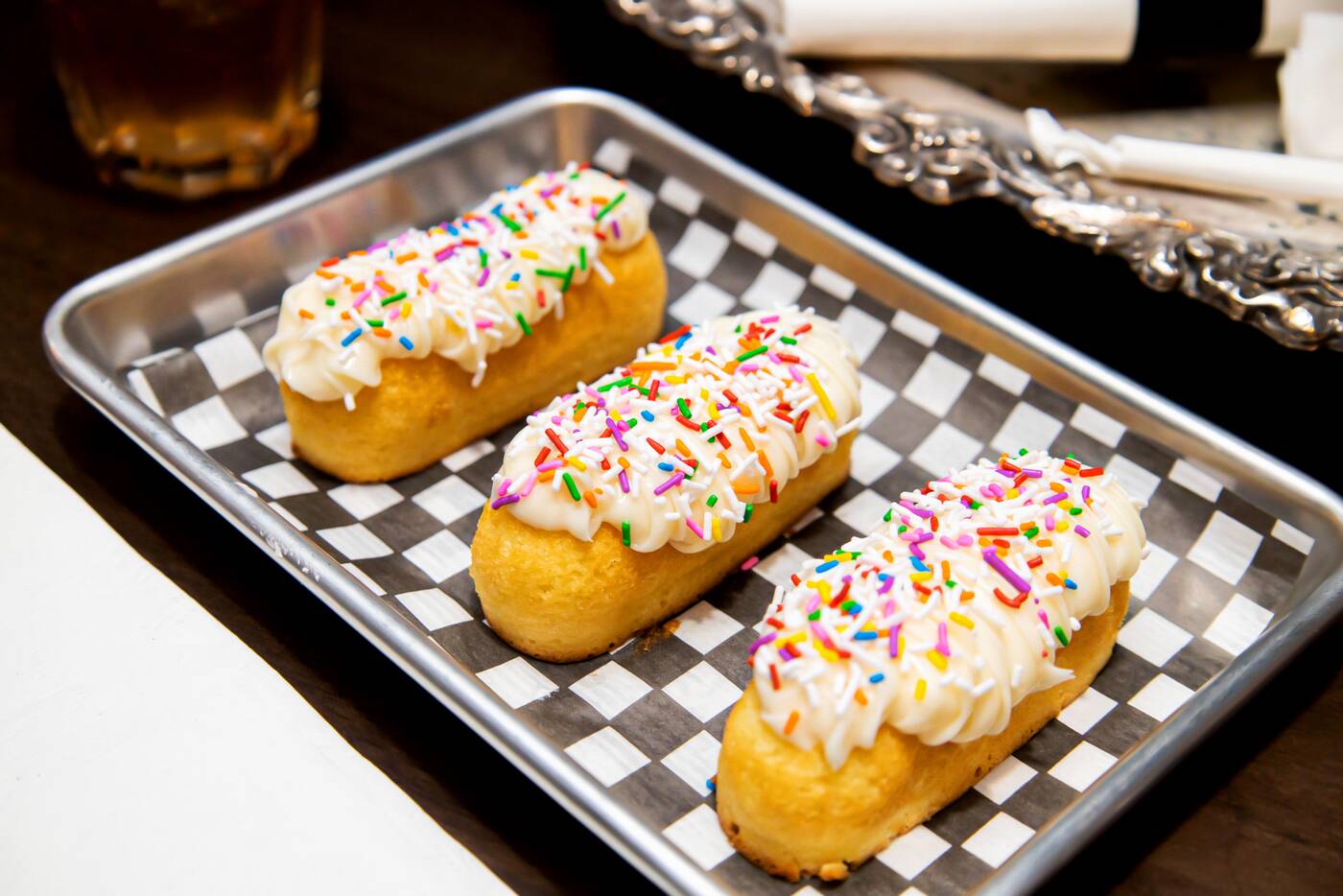 For dessert, the menu serves a retro childhood favourite: Twinkies ($5) that's blanketed with an extra thick layer of vanilla icing.

Here, a cushion of sweet vanilla cake is dressed up with colourful sprinkles. 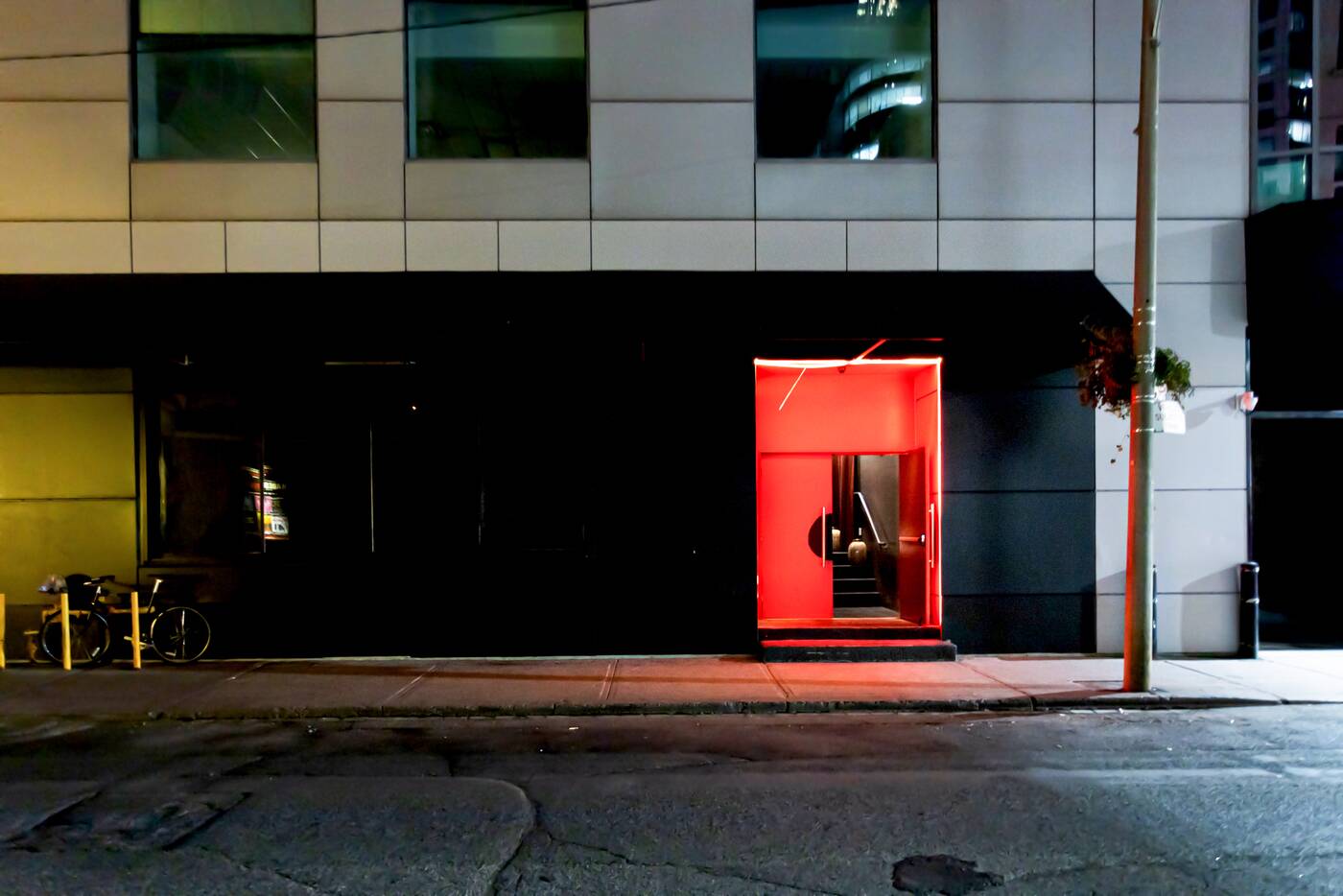 Black Pearl has a 600-person capacity and no signage at the entrance. You can find the hot spot on a side street near Adelaide and John.