As the price and competition to nab a home in Toronto cools somewhat, the rental market in the city is going in the opposite direction, with averaged prices for a one-bedroom unit hitting a new high in June not seen in nearly two years, since July of 2020.

According to the latest Canadian Rent Report from apartment listing site Zumper, rents just keep on rising, going up five per cent for one-bedroom spots (to hit $2,100, on average) and 2.7 per cent for two-bedrooms (to hit $2,700) in just one month.

Looking at June 2022 compared to the same time last year really puts things into perspective, as the average price for both unit sizes was up more than a whopping 22 per cent (if you moved during the pandemic and secured a cheaper rate, consider yourself very lucky).

As usual, Toronto and Vancouver are neck-and-neck when it comes to which city is more expensive for tenants, with our friends to the west edging us out by charging an additional $200 for one-bedroom units and $600 for two-bedrooms, on average, but Toronto remains the second priciest locale in the country by far.

Interestingly enough, Oshawa, Ontario also made the top five list for the most expensive hubs to rent in, reaching $1,690 for a one-bedroom apartment and $2,000 for two — nowhere near Toronto levels, but costly for the area and its one-hour distance from downtown. 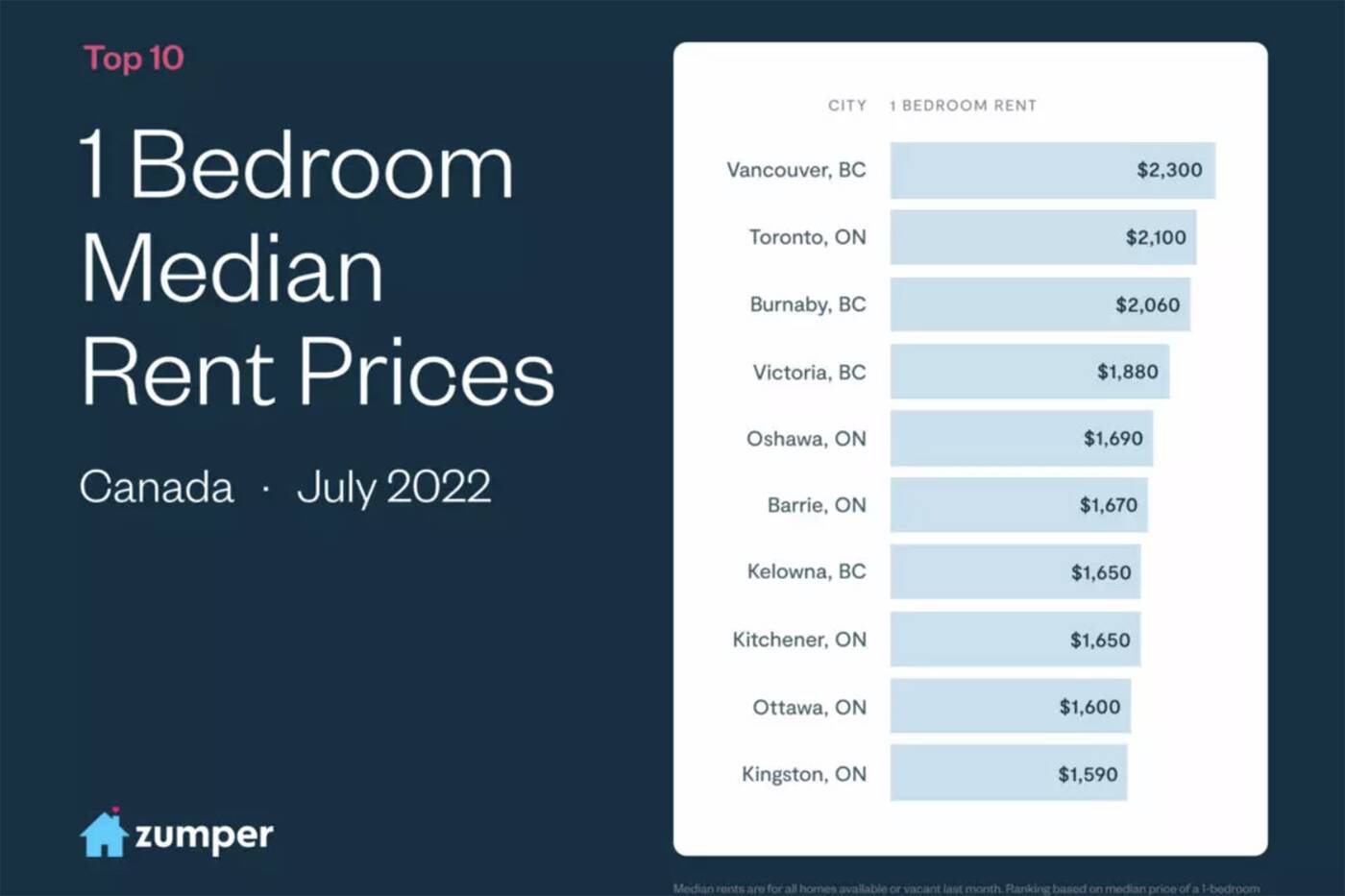 The top 10 most expensive places to rent across the country right now, based on June 2022 datt. Infographic from Zumper.

Also noteworthy was the fact that it was another Ontario municipality which had the biggest jump in prices nationwide from May to June: Windsor, which at $1,350 for a one-bedroom is the 17th most expensive city to rent in within Canada. (St. Catharines had the third-largest spike, at 5.4 per cent month-over-month to hit $1,550).

Barrie, Ontario, meanwhile, was one of the few places in the country where rent prices actually dipped, dropping from the fifth to the sixth most expensive market with a 5.1 per cent fall month-over-month to $1,670 for a single-bedroom place.

Other Ontario cities within the top 10 most expensive places to rent an apartment in Canada include Kitchener, Ottawa and Kingston.