A block of Toronto businesses could be on the way out, with a new development application revealing plans to bring a tree-covered condo building to a site across from the Summerhill LCBO.

It seems like Toronto gets a new design for a vertical forest almost every year, but none of the fancy visions presented in renderings have been constructed to date.

Woodcliffe Landmark Properties is the latest to join the vertical forest craze, applying to replace three buildings at 1196-1210 Yonge Street and 8 Birch Avenue with a condo building known under the working title of Yonge & Birch.

Woodcliffe is well-known for its contributions to Toronto heritage preservation, having led the restoration of the nearby North Toronto CPR railway station, now home to the Summerhill LCBO, as well as the 2013-completed Market Street restoration across from St. Lawrence Market.

But unlike those projects, the developer has no plans to preserve the trio of old buildings on this site, which are between 114 and 132 years old.

The buildings shown here would be cleared to make way for this new "vertical forest" condo building. Image via Google Street View.

All three would be demolished to clear a path for a 14-storey condo building featuring a vertical forest design by KPMB Architects. 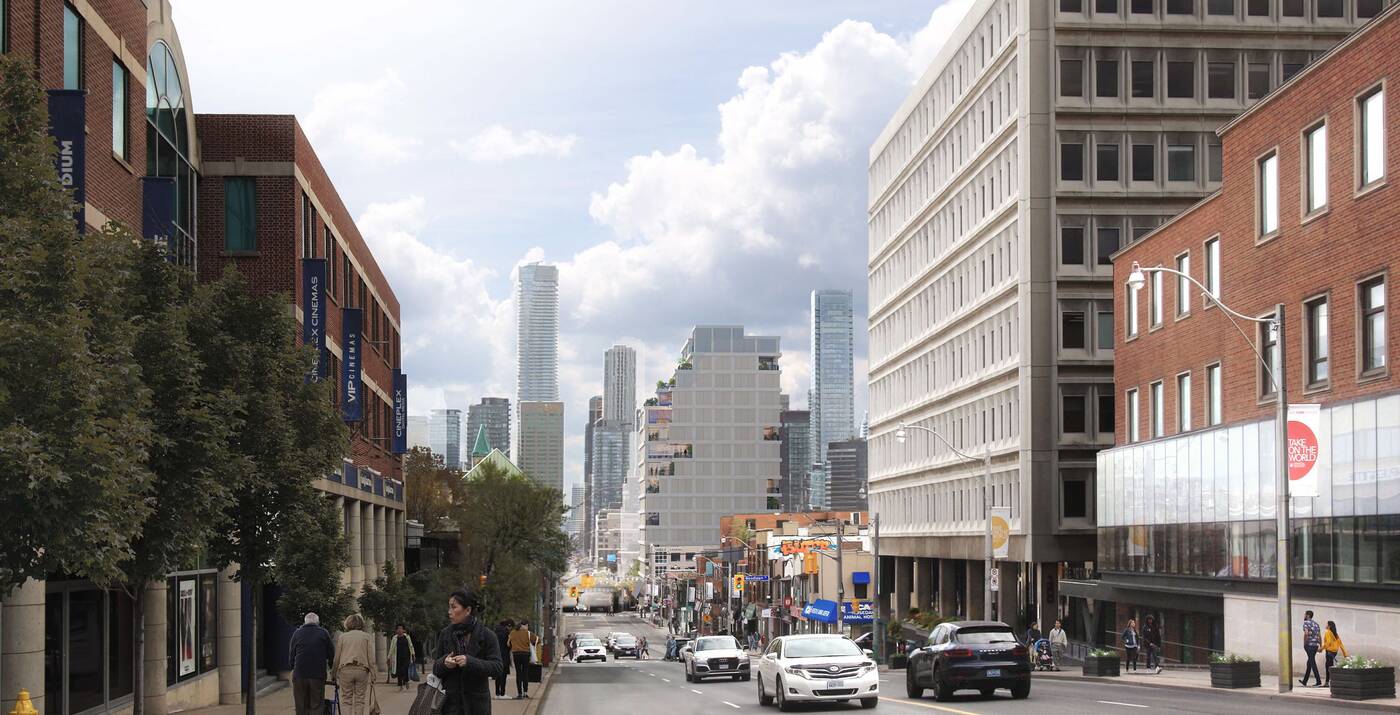 Looking south along Yonge Street to the project known as Yonge & Birch. Rendering by KPMB Architects.

Paul Dydula, Director of Development at Woodcliffe, tells blogTO that the "vertical forest is one of the key elements of our design," citing the design team's "careful orchestration of the amenities and balconies."

The developer is working with landscape architects The Planning Partnership on the building's greenery, with Dydula saying the plan factors in "survivability in the harsh winter condition of an exposed Toronto balcony. We are still early in the design process but are eager to be part of the solution of greening Toronto's new buildings."

The existing buildings — none having protected heritage status — would indeed be lost if plans are approved, but the site's past would not be completely forgotten, thanks to an interesting interpretive plan at the base of the building from heritage experts ERA Architects.

Yonge Street used to look a whole lot different around these parts, the street re-graded over a century ago to separate road and rail traffic, requiring alterations to buildings like the ones now targeted for demolition. 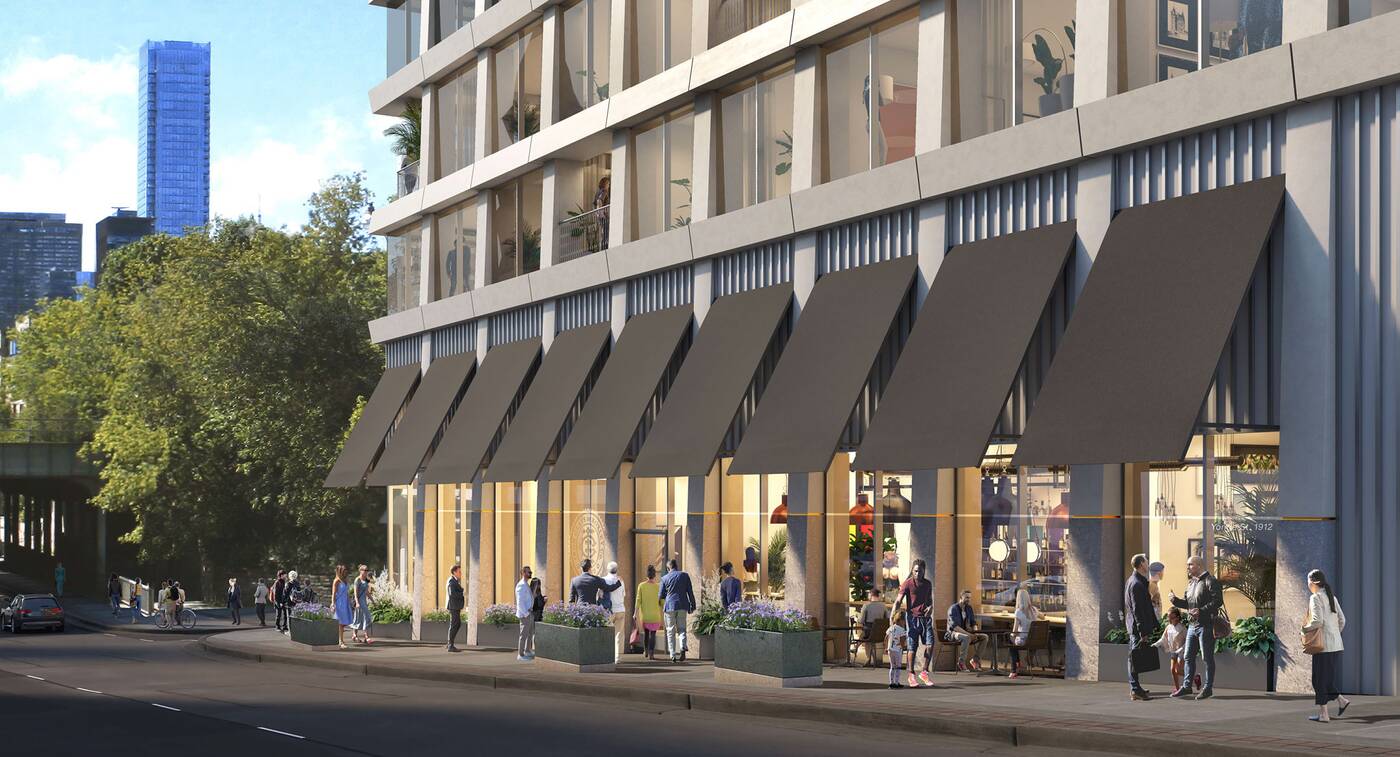 The ground floor of Yonge & Birch is set to feature an interpretive installation marking the original grade of Yonge Street. Rendering by KPMB Architects.

The original grade of Yonge, before it was lowered to pass under the tracks, will be reflected on the ground floor of the new building. This interpretive feature includes an LED-lit brass inlayed marker at the historic grade line, with a rough texture below to reference where below-grade foundations once existed. 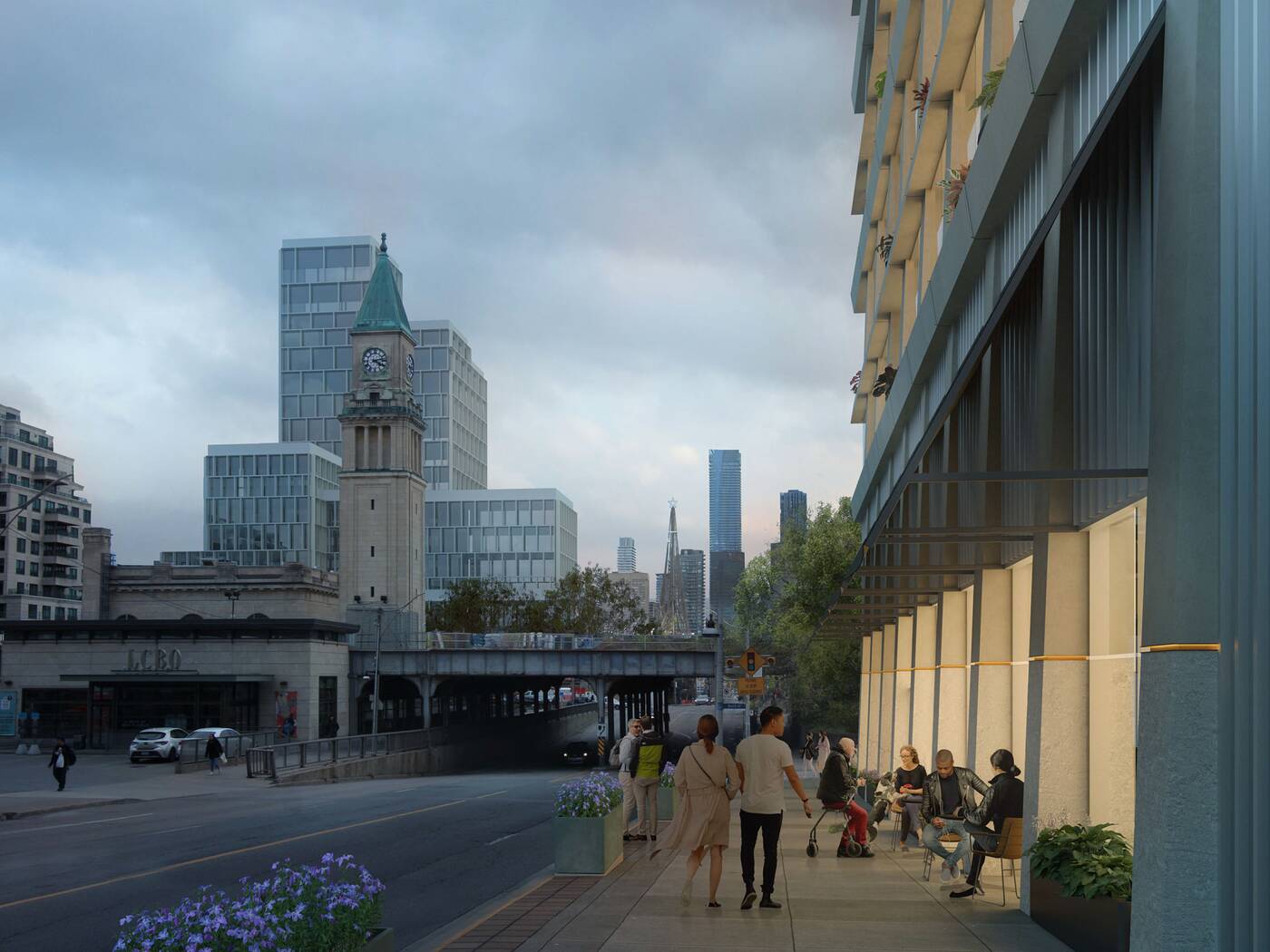 New retail space would replace the existing businesses on the block. Rendering by KPMB Architects.

Backed up by an extensive heritage report, Dydula says that the condition of the buildings "eliminates the potential of retention," but stresses that "the regrading of Yonge Street in 1914 in conjunction with city-wide grade separation of the Canadian Pacific Rail is a significant feature to pay homage to."

While the current businesses, including neighbourhood institution Boxcar Social, would be lost to make way for the new building, the redevelopment would include over 200 square metres of new retail space along Yonge Street, with two units flanking a residential entrance and lobby.

Above, the tower would include just 59 condominium units along with eight rentals to replace the existing units on site. A total of 68 units are proposed in a mix of three studios, 13 one-bedrooms, 41 two-bedrooms, and ten three-bedrooms.

As for the businesses that would be forced to vacate, John Baker of Boxcar Social tells blogTO that the establishment signed a short-term lease eight years ago, and "Woodcliffe was totally transparent about the possibility of the building being redeveloped."

Baker admits that while the business will be sad to leave eventually, he understands that "developments like the one Woodcliffe is proposing is part of doing business in a growing city like Toronto."

Looking to the future, Baker says that Boxcar Social "will absolutely look to move the location to a new space in Summerhill when the time comes. The neighbourhood has become a significant part of Boxcar's evolution, and we've developed lasting relationships here that we don't take for granted."

Meanwhile, Paul Dydula of Woodcliffe says that the developer is working with Boxcar on a new concept within their Waterworks Residences development on Richmond Street West.