Historic Toronto church to be moved for a stunning flatiron development

Diagonals carving through Toronto's mostly-perfect grid of roads have created many quirky sites, none as famous as the heritage flatiron building. But several more of these wedge-shaped buildings are in the works, the latest being a mixed-use community known as Weston Park.

But before Weston and Lawrence area residents whip themselves into a frenzy, there are some pretty big perks being promised for the community, that is, if they can stomach a bit of extra height on the local skyline.

After a long history of behind-the-scenes discussions dating back to 2008, plans for the new complex were first revealed in August during a public consultation with the local community.

The two-tower complex planned for 1871 Weston Road recently moved on to the next step towards realization, Castlepoint Numa (one of the co-developers of the troubled L Tower) and partner Weston Park Baptist Church (WPBC) submitting redevelopment plans with the city in early November. 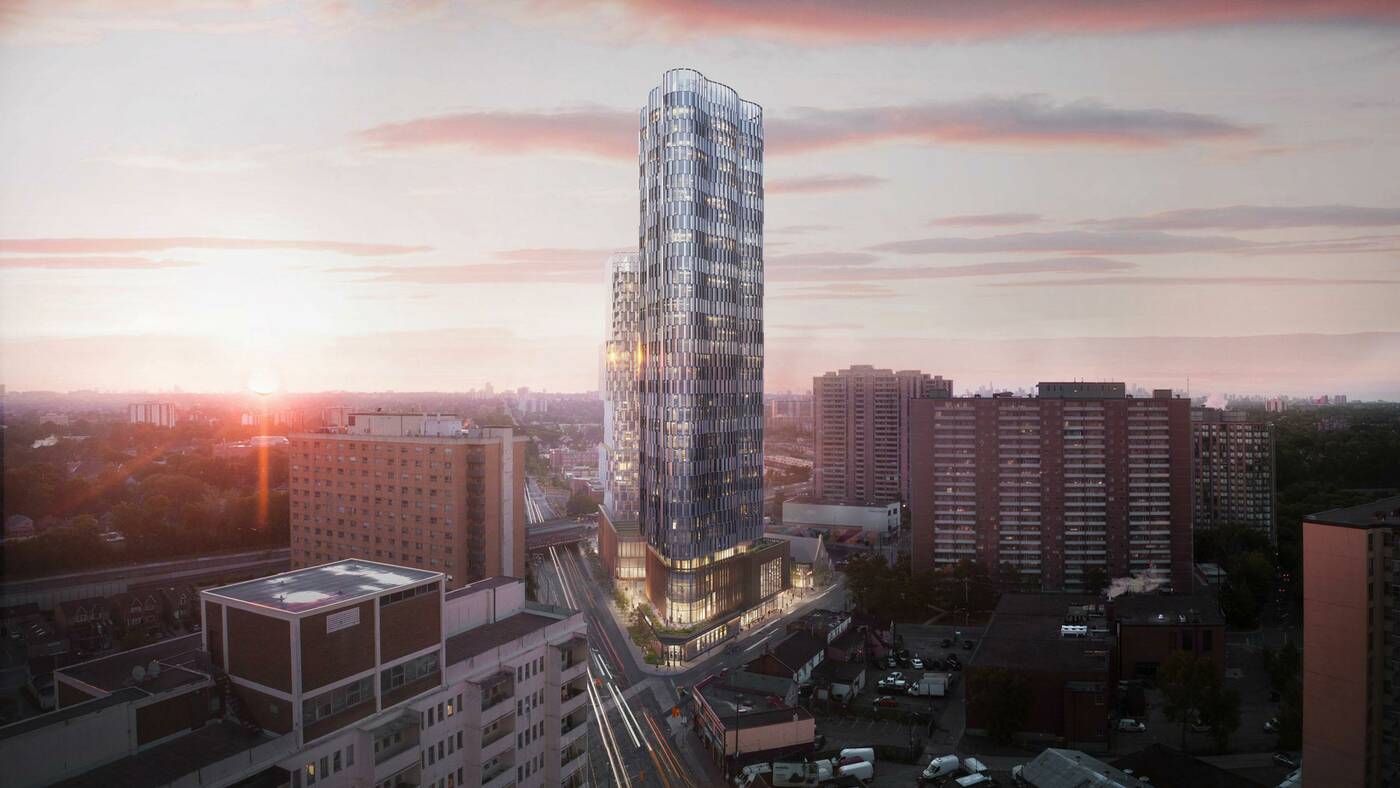 The complex would rise higher than existing buildings in the area, though it offers plenty of community benefits in return. Rendering by SvN Architects and Giannone Petricone Associates.

The application offers fresh new details of the two-tower project, which features a design by the team of SvN Architects and Giannone Petricone Associates that will bring a mix of rentals and condos to the neighbourhood.

The area would get some new height out of the plan, with a 38-storey west tower and a 28-storey east tower, though locals uneasy about tall buildings in their backyard will be relieved to hear that development will bring 3,230 square metres of community space and retain two beloved buildings on site.

The two existing buildings on site would live on in the plans, with a 1962 modernist bank structure to form the base of a new flatiron-shaped tower and a 1947-built church to be restored, relocated to the site's east corner, and incorporated into retail space. 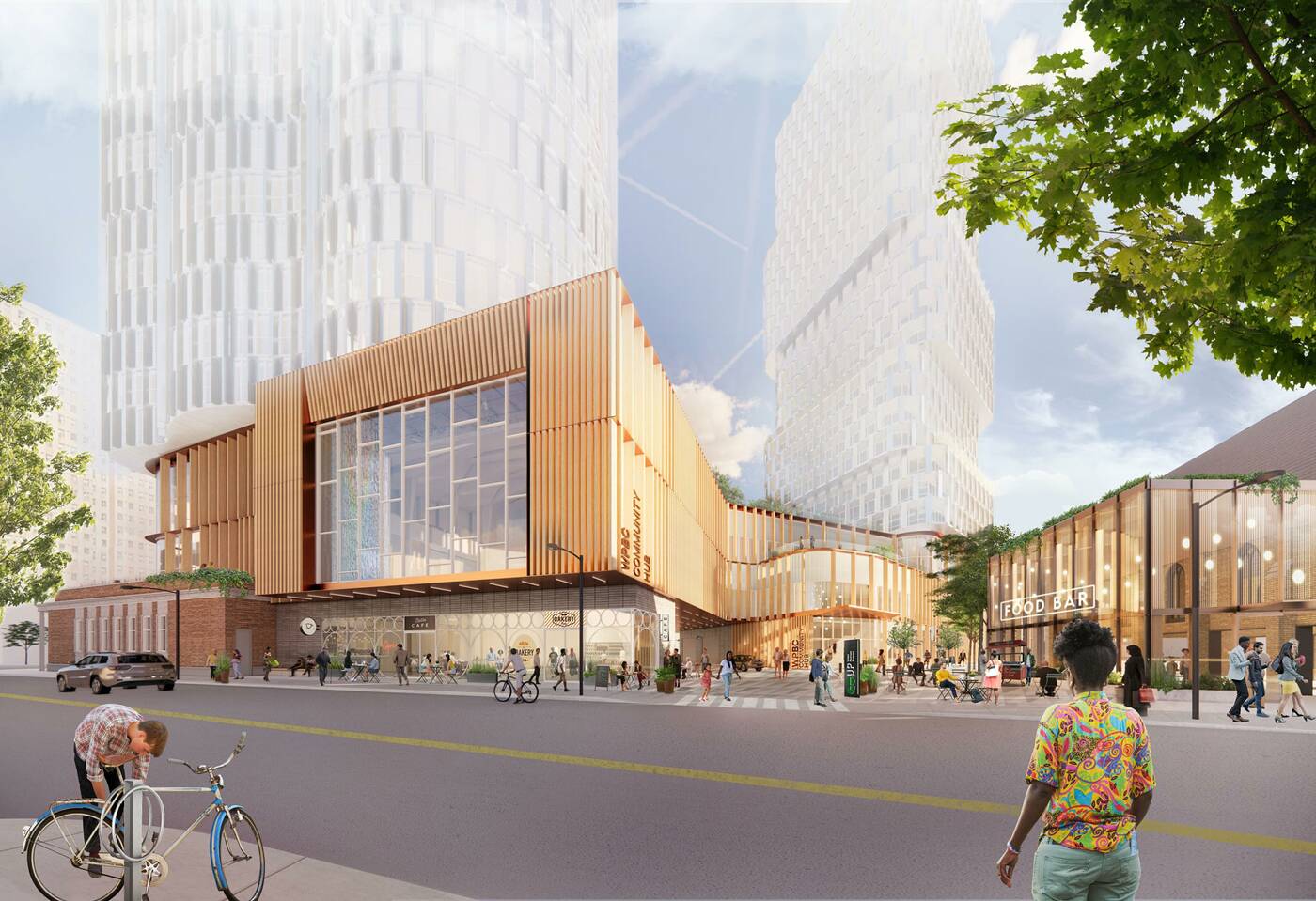 The existing flatiron building (L) will form the base of a wedge-shaped tower, while the church (R) will be incorporated into retail space. Rendering by SvN Architects and Giannone Petricone Associates.

A total of 1,250 square metres of retail is planned across the site, while a central open space and pedestrian walkway extending diagonally through the site will encourage pedestrians to filter through, helping to animate the surrounding streets.

On top of the improved pedestrian experience, the development promises a wide range of community uses that would give back to the surrounding neighbourhood.

Some of the community features are set to include a sizeable multi-purpose space, a new church sanctuary and performance hall, a full-sized gymnasium, a flex/gathering space, and a support space. 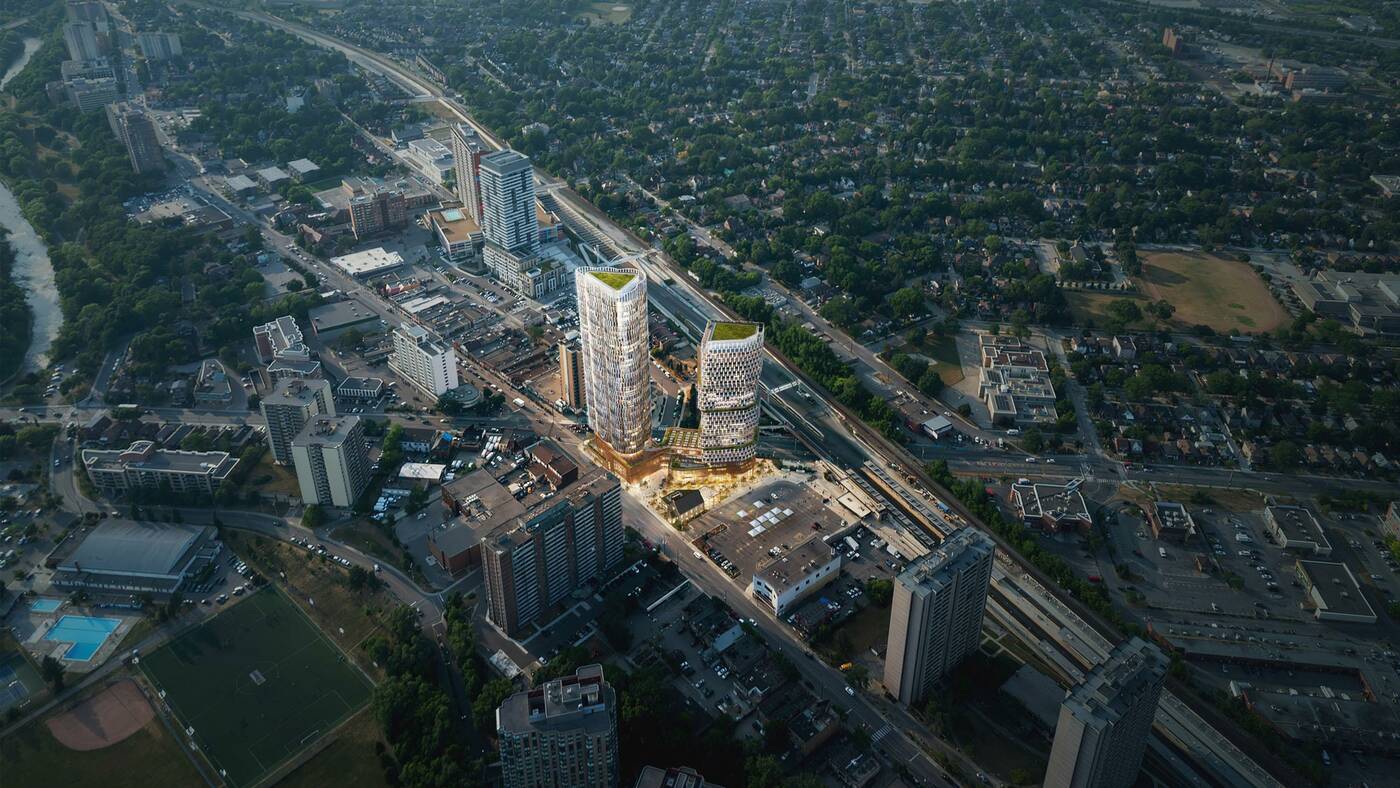 The two towers would be centred around a new urban plaza, to be animated by retail and community uses. Rendering by SvN Architects and Giannone Petricone Associates.

A total of 538 residential units are proposed, with 253 one-bedrooms, 226 two-bedrooms, and 59 three-bedrooms. Though the breakdown of condos and rentals has not yet been finalized, 53 per cent of the total units are multi-bedroom layouts capable of supporting families.

The project is expected to appear before the local community council next year, though it could still be quite some time before shovels hit the ground.