Investors continue to drive up the price of Toronto's housing market

While competition grows ever fiercer and prices swell to new highs for those seeking a tiny a slice of Toronto's limited housing supply, vacant homes remain a huge problem in the city, with Canada now home to one of the highest levels of empty units in the world.

New data from the Organisation for Economic Co-operation and Development shows that there are more than 1.3 million livable homes currently sitting empty in Canada — about six years of supply, or a whopping 1 in 12 residential properties — thanks to wealthy investors buying up real estate and sitting on it for future profit.

Toronto, just named the second most at-risk city in the world for a housing bubble with an average home price of well over $1 million not just in the city proper but in the whole area, is finally implementing a vacant home tax to curb the trend of investor hoarding starting in 2022.

The hope is that the move helps increase supply and thus bring down prices into a more realistic range.

But, for multimillionaires, the tax of a measley one per cent of property value may not be as much of an effector of change as the city hopes.

Still, early data did show that a large chunk of investors were indeed planning on selling in light of the tax, just like a whole slew of them scrambled to ditch their condos amid the low rents, new short-term rental rules and rising vacancy rates we saw earlier in the pandemic.

As it stands now, investors who own multiple properties in the city are still dominating the market: nearly 30 per cent of homes that switched hands in 2021 were purchased by buyers who already owned more than one home. 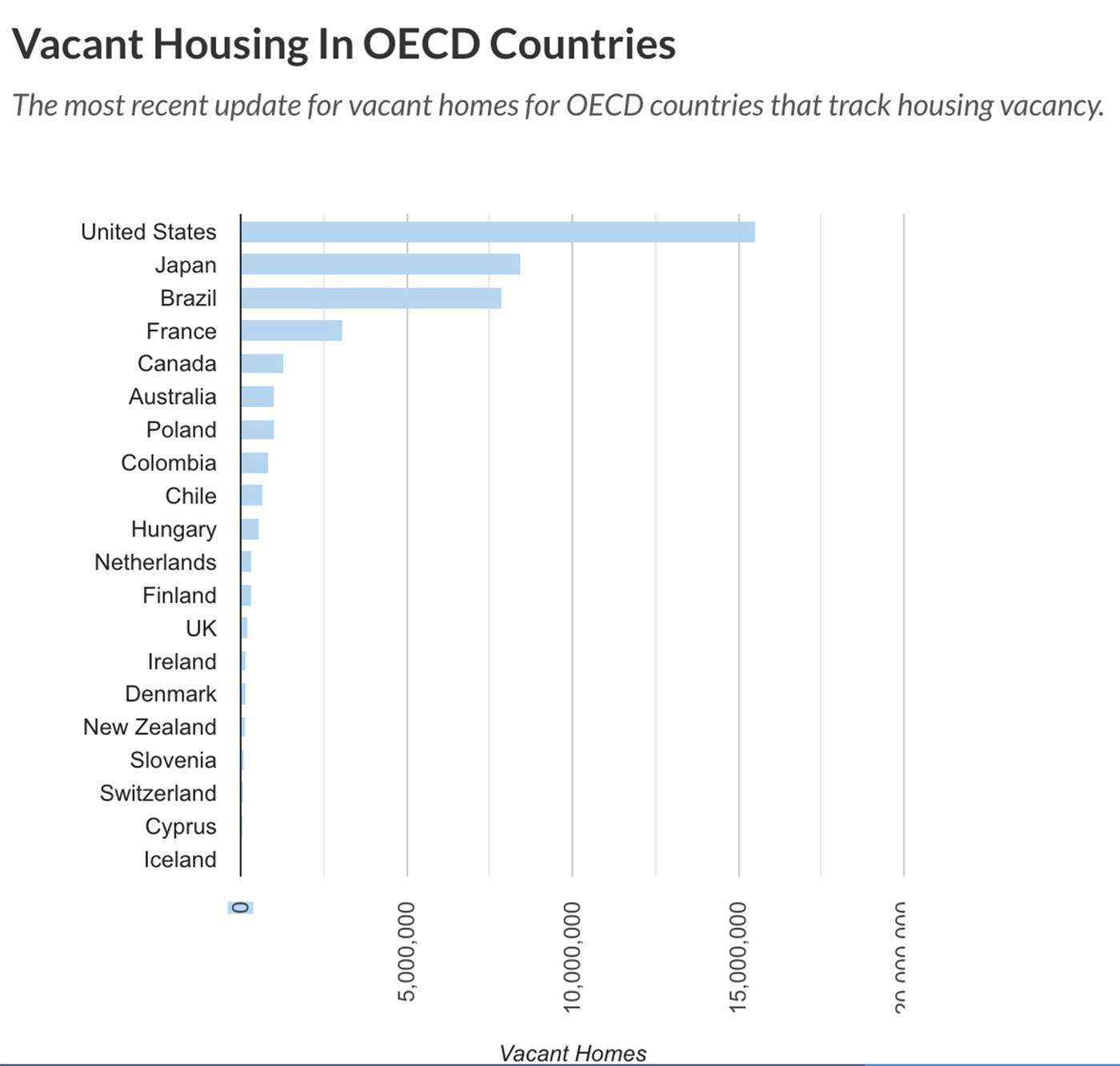 Canada is in the top five for number of vacant homes. Chart from Better Dwelling using OECD data.

Increasingly, these appear to be boomers who are gifting properties to their adult kids to help them get a foot in the door of the city's hot real estate market, which is ever more out of reach for progressively more people, even those in high income brackets.

Also, more than 1 in 20 new condos are purchased by foreign buyers, who own tens of billions of dollars of the city's housing supply and are heavy players in the luxury market.

And then there are the corporate entities, who hold about $28.5 billion of the city's mortgages.

People now need a household income of nearly $200,000 a year to afford to pay off an average detached house in Toronto, and would need to save up for nearly 30 years to afford the down payment.

Hmmm...if only there were a way to solve the issue of a vacant home, like, some sort of way of allowing people to afford one, perhaps

As the real estate experts at Better Dwelling note in their analysis, "Canada also has notoriously low property tax rates and cheap money... the combination is like asking you to hold homes vacant. It's a country with sub one per cent property taxes, a central bank pushing mortgages below two per cent, and four per cent inflation. You would have to be an idiot not to hold vacant property with this setup."

They also note that, though there are foreign buyer taxes here to help prevent wealthy overseas investors from taking away valuable and much-needed housing supply, they are "mostly just a PR tool to dismiss the issue" — though some don't feel the problem is the main one in the sector, or as big of one as politicians say.