It was only a few years ago that "moving to the suburbs" was an automatic option for millennials in Toronto who were ready (or forced) to go "settle down."

Markham, Brampton, Oshawa, Mississauga — these were once the outlying cities young couples flocked to for the purpose of buying houses and starting families. It was simply what one did upon retiring from the downtown "lifestyle," and people seemed more likely to struggle with a loss of identity than securing a mortgage.

Today, in a post-pandemic world, you'd be lucky to score a detached home in even the most far-flung regions of the GTA for less than seven figures on average.

In fact, according to a new RE/MAX report, average house prices below the $1 million mark can currently be found in only six of the 60 Toronto Regional Real Estate Board (TRREB) districts.

That equates to 90 per cent of the entire region — as in, the average price of a single-detached is now above one million dollars across the vast majority of the entire Greater Toronto Area. 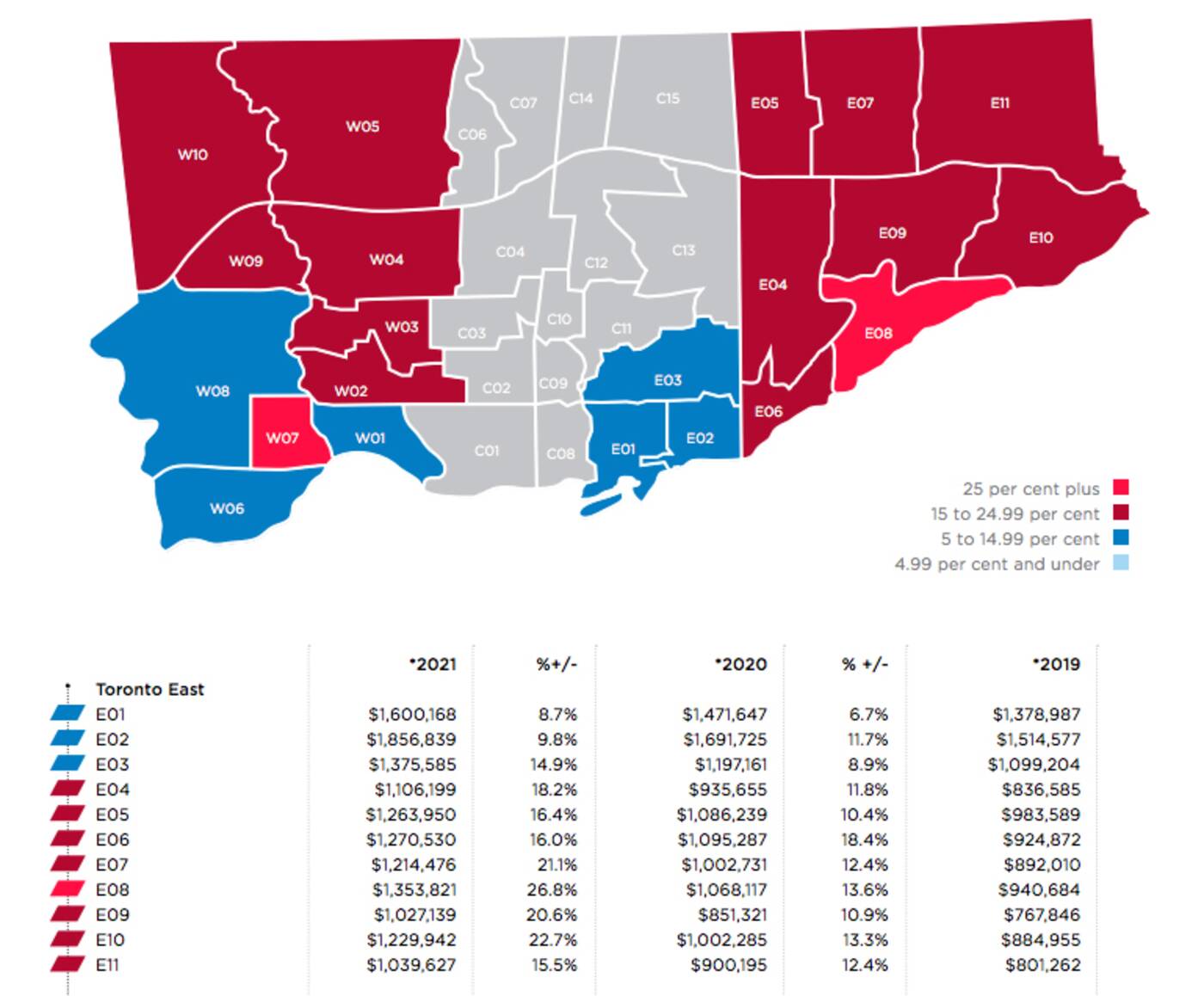 Prices haven't been rising as fast in the 416 as they have been in the 905, though single-detached values remain higher on average inside the city. Image via RE/MAX.

The six communities where prices are, on average, still in the six-figure range, are all in the 905: Georgina, Orangeville, Brock, Clarington, Oshawa and Scugog.

And trends show that these cities likely won't remain affordable for much longer, with "staggering" year-over-year price growth rates of between 29 and 44 per cent over the time period surveyed (January to June of 2020 vs. the same time in 2021).

"With 11,297 active listings, this was the lowest level for June in at least a decade and down 35 per cent from the 10-year average of 17,260... As a result, the average price for single-detached homes soared, with values in almost 97 per cent of TRREB communities well-ahead of year-ago levels."

The highest performers were Uxbridge, where average prices spiked 46.4 per cent to reach $1,365,983, and Scugog, where detached homes appreciated by 43.9 per cent over the time period surveyed to reach a new average of $986,878. 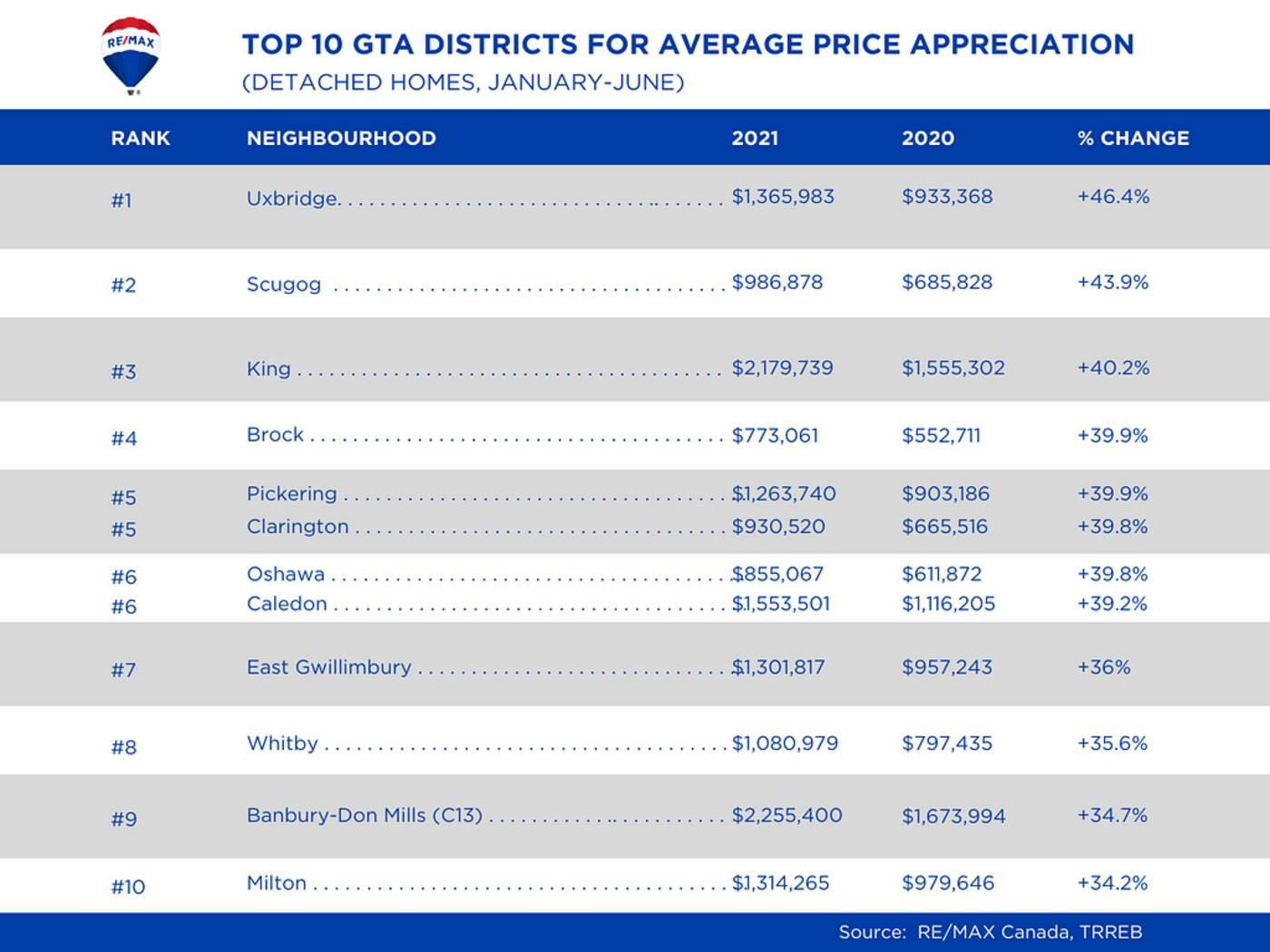 Scugog, Brock, Oshawa and Clarington have seen some of the fastest-rising home values in the GTA, despite still boasting average prices below the one-million mark. Image via RE/MAX.

"Halfway into 2021 and the Greater Toronto housing market continues to fire on all cylinders," says RE/MAX Canada Senior Vice President Christopher Alexander, noting that this this upward trajectory will likely continue without a serious influx of new listings in the months ahead.

"Overall home sales topped 70,000 between January and June, the strongest first half in the history of the Toronto Regional Real Estate Board, while values smashed through record levels set in previous years."

Alexander pegs the surge in 905-area home prices on first-time buyers who are scrambling to get into the market before they literally can't (like most young people in the City of Toronto proper.)

Time is running out though, thanks to a lack of inventory: There are only six under-a-million communities today, but the same time period in 2020 had 18 of them. In 2019, there were 28 districts in this same category.

"More transit options and hybrid work schedules have made relocation to the city’s outlying areas even more attractive," explains Alexander. "First-time buyers are feeling the squeeze but are still determined to become homeowners, with many happily travelling further afield to make it happen while working from home." 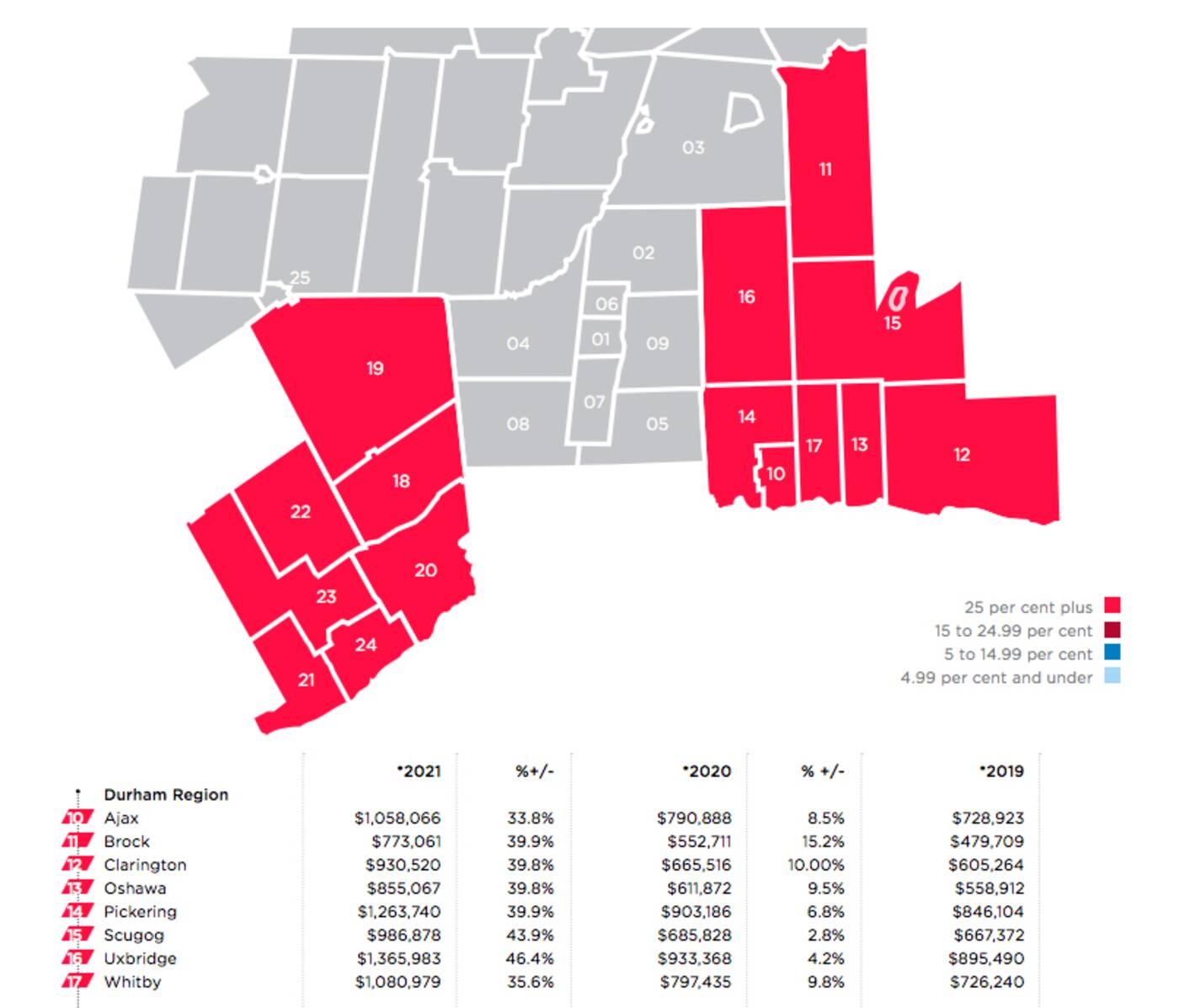 Detached home prices are on fire in Durham Region, where every TRREB district saw values rise by more than 33 per cent between the first halves of 2020 and 2021. Image via RE/MAX.

The 905 isn't alone in seeing meteoric price growth however, as we all well know by this point. Many TRREB districts in the 416 (read: within Toronto itself) are also posting insane home price and sales increases.

"Homebuyers who are 'trading up' are likely behind the push for housing in the 416 area code, driving sales in central areas such as Bathurst Manor and Clanton Park, which are up 169.8 per cent in the first six months of 2021," reads the RE/MAX report.

Sales in the neighbourhoods of Lansing-Westgate, Newtonbrook West, Willowdale West and Westminster-Branson all climbed by more than 120 per cent over the same period, while the east end communities of Milliken, Agincourt and Malvern West all jumped a whopping 171.4 per cent.

Price-wise, the Toronto communities of Banbury-Don Mills, Victoria Village and Parkwoods-Donalda saw the steepest growth, rising 34.7 per cent between 2020 and 2021 to reach a new average detached home value of $2,255,400.

"The most daunting aspect of the current housing surge is that this period may actually be the calm before the storm," says Alexander, dashing the hopes of anyone hoping for a quick bubble pop.

"Immigration is expected to bring another 1.2 million permanent residents to the country over the next three years. With all this stimulus at play, comparisons have been made to the Roaring 1920s — let's just hope that this script has a better ending."