Enormous complex to weave through block of Toronto heritage buildings

Where some see much-needed investment in one of Toronto's most marginalized areas, others see gentrification making the city less and less affordable. However you look at it, big changes are coming to the meeting point between the Moss Park and Corktown neighbourhoods.

A block stretching west from Ontario Street between Queen and Richmond has been targeted for redevelopment for several years, following the sudden demolition of city-designated heritage at 267 Queen St East in 2013.

Controversy has followed the proposed development at every step of the way since.

A development application for the site from Edmonton-based WAM Development Group (now ONE Properties) landed with the city back in 2015, revealing plans for a three-tower condominium complex at 245 Queen East.

Initial reactions from the local community were mixed. Some of these takes were negative, reflecting residents' fatigue from years of high-rise gentrification and the associated rising housing prices that have seen many long-time area residents displaced.

While some positive community engagement was noted, city planners and Toronto's Design Review Panel were more uniform in their criticism, siding with locals in 2016 that the project was just too much for the area and raising alarms about the treatment of the heritage buildings on site.

On a beautiful spring evening, an engaged community came out to assist @CityPlanTO in our review of an application at 245 Queen Street East. New park space and Heritage were amongst the many comments which we heard. pic.twitter.com/6zRuv04O7N

In 2018, the project's appeal with the Local Planning Appeal Tribunal (since renamed the Ontario Land Tribunal) was settled, with the developers and the City agreeing on changes to the buildings' scale and positioning, as well as the placement of a new public park.

These changes include greatly reduced tower heights of 24, 28, and 37 storeys, a sharp drop from the controversial 47, 52, and 56-storey heights that ruffled the feathers of planners and area residents years earlier.

A series of different designs, architects, and developers have been associated with the property in the years since the first application.

The most recent shakeup came earlier this year when the site was split off into a pair of separate parcels. The eastern 2.14-acre portion of the site along Ontario was sold off to developer Tricon for $129 million, while the western half is still in the hands of ONE Properties. 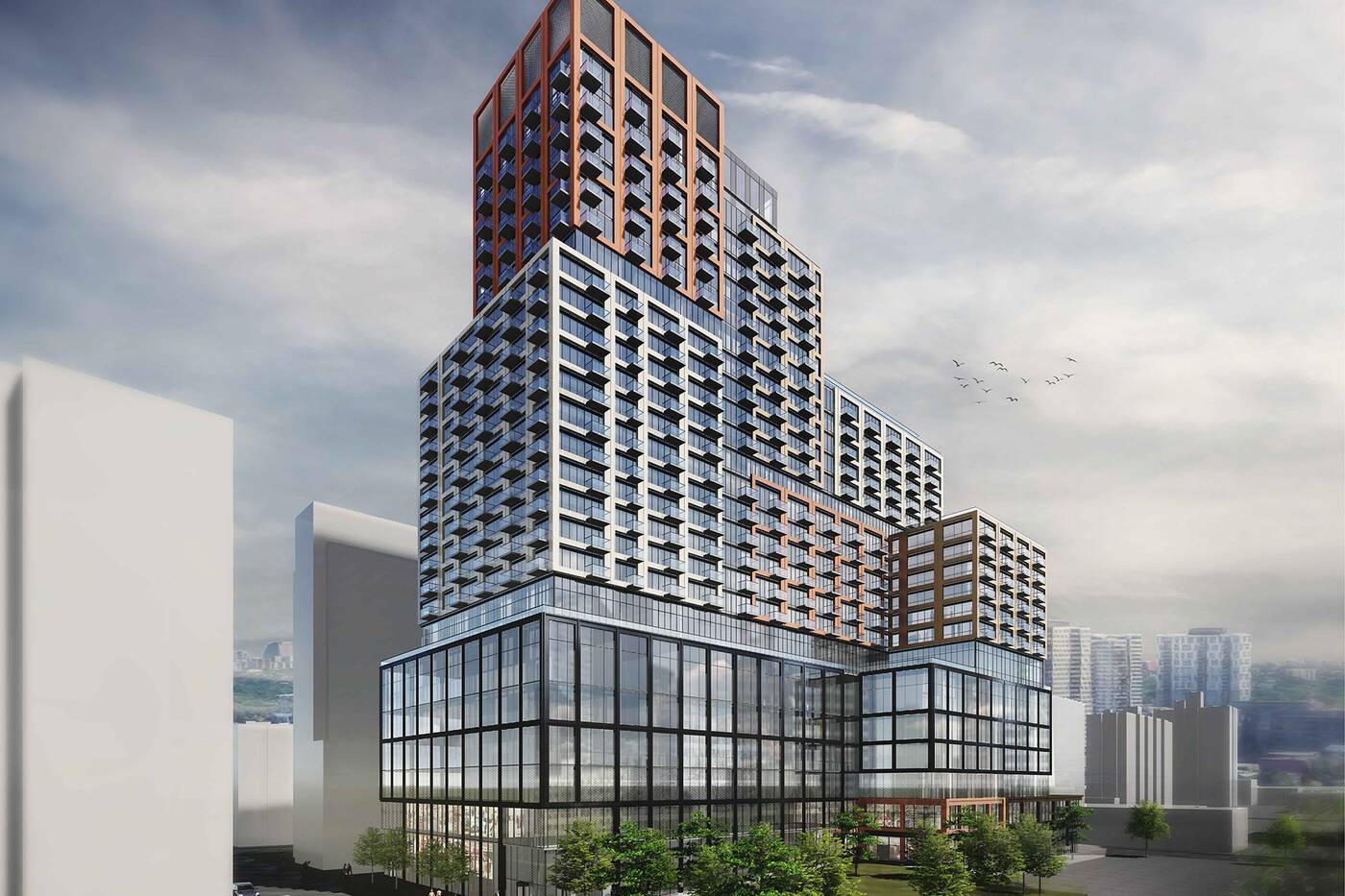 A view of the proposed development's western half facing south east.

The addresses involved are 245 Queen Street East for the western parcel, a heritage building with the 1906-built S. Price and Sons Dairy Building and current home of Diamond Taxi, and 257 Queen East.

The west end of the site would be built out with a 25-storey condominium building with 446 units and a design by Graziani + Corazza Architects. 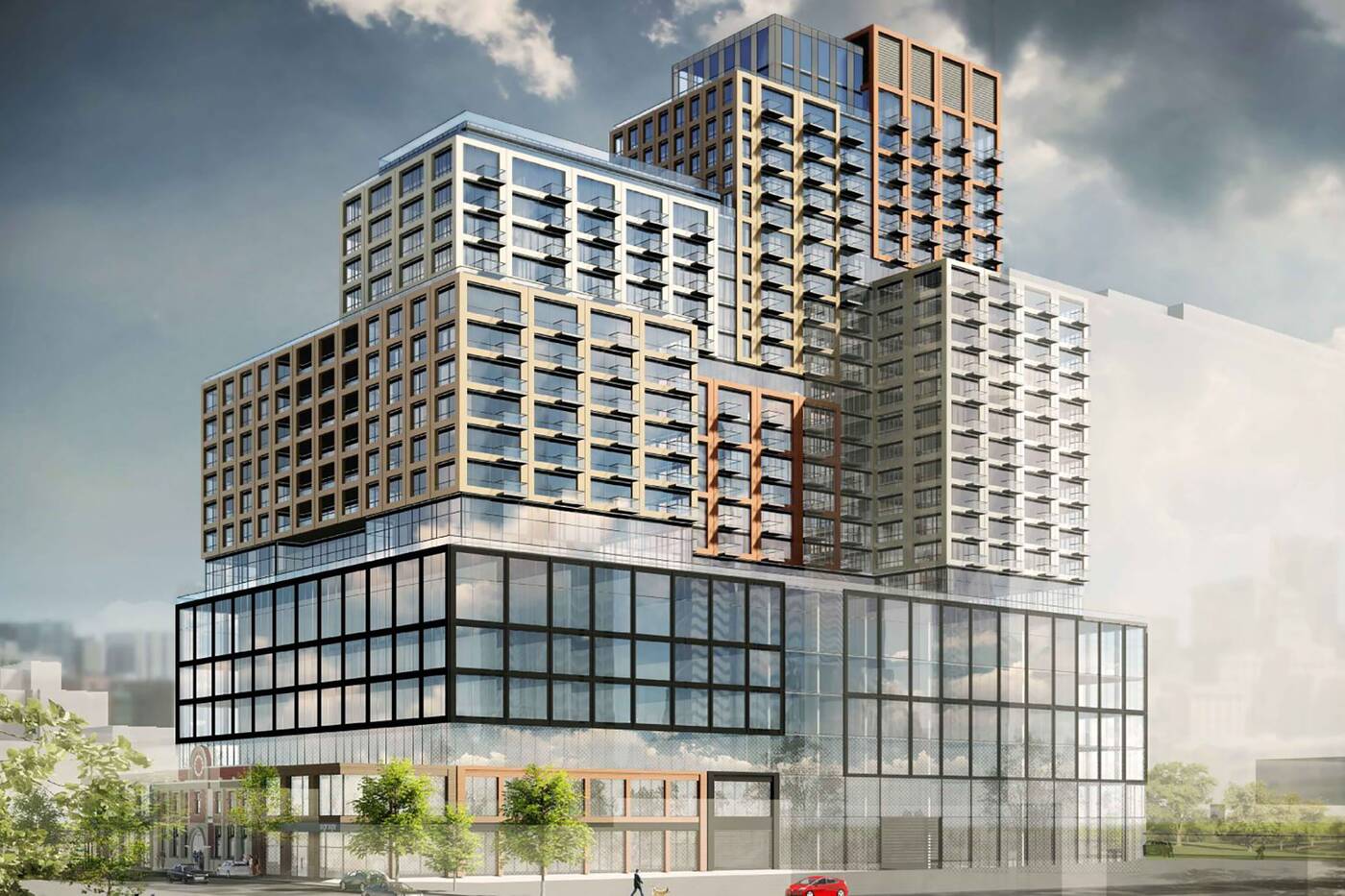 A view of the proposed development's western half facing north west.

Locals' concerns about condo saturation and gentrification will be at least partially alleviated by Tricon's plans for the east half of the site, with a pair of rental towers with 882 units and matching designs by Hariri Pontarini Architects.

Though many residents of existing rental units would be displaced by the planned development, the city has measures in place to ensure that comparable units are built into the project, provided to former residents at their old rental rates. 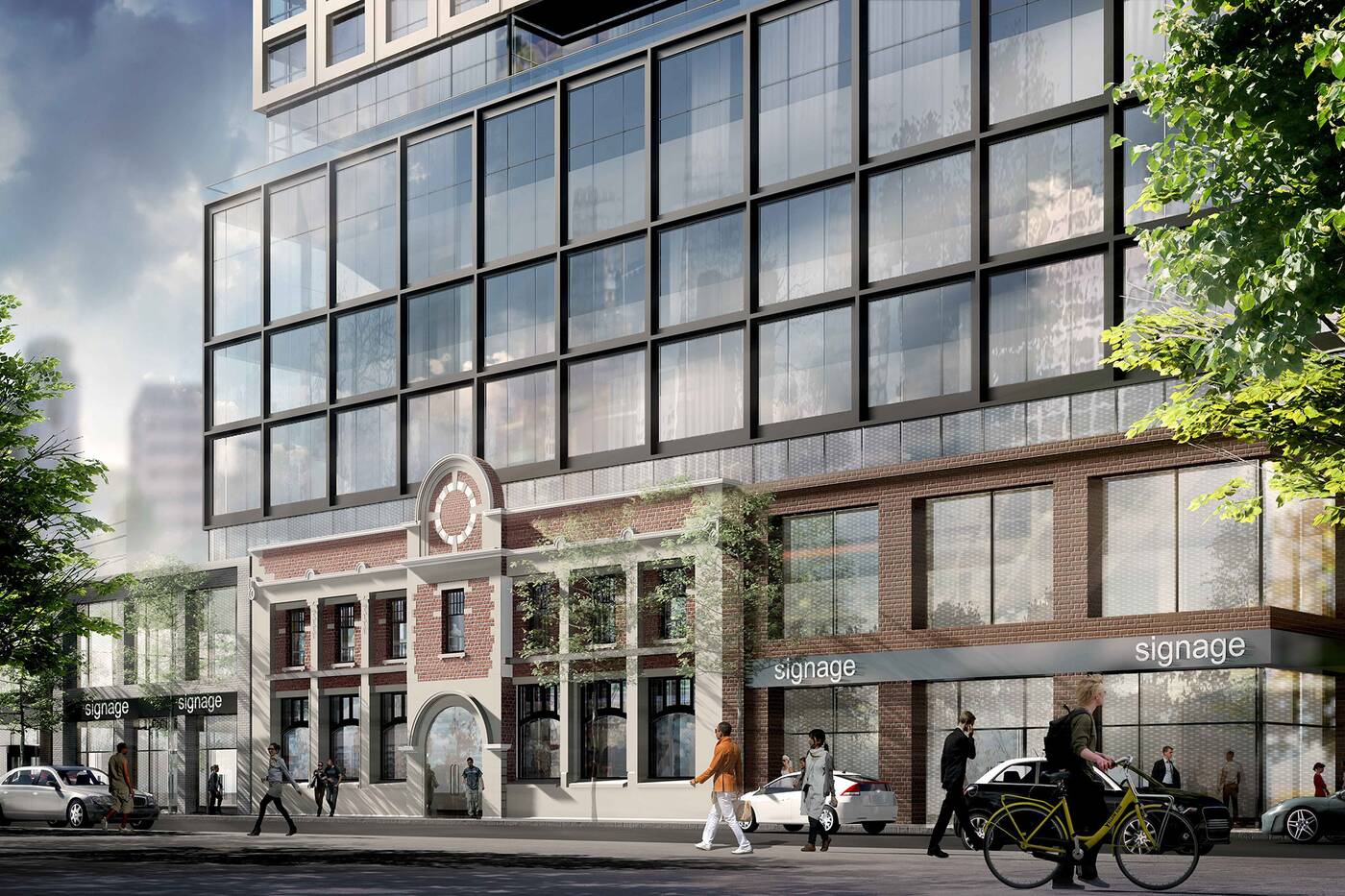 A view of the proposed development facing south across Queen Street East.

The unexpected demolition of 267 Queen East in 2013 stoked fears in the community that the area's heritage buildings were at risk. However, the former shoe factory and S. Price and Sons Dairy Building are among the heritage buildings planned to live on within the bases of the two developments.

Both sites would meet with a new public park, a community benefit that proved to play a central role in the negotiations to advance the project.