Weekend events in Toronto is our guide to events happening this Friday, Saturday and Sunday. Here's what's happening in Toronto this January 25-27, 2013.

Winterlicious 2013
Eat well at high-end restaurants, spend less money. While Winterlicious is intended to get Torontonians out in the cold to pump money into the restaurant industry during the slow season, that doesn't mean it can't be delicious. Prix-fixe promotions will be offered at 191 restaurants across the city, ranging from $25-$45 per person for dinner, and culinary events will take place throughout the 2-week event with the city's best chefs leading the experience. Reservations are always recommended. Check out our preview post.
Various restaurants, January 25-February 7, 2013 $15-$45

Feast 05
Feast like a beast at XPACE Cultural Centre this Sunday night in support of art and design funding. Buy a ticket to this communal vegetarian dinner and listen to artists, designers, and collectives present their ideas for upcoming projects. At the end of the evening, feasters will vote on their favourite and the winner will receive the money raised by Feast 05 to fund their project. Support what Feast stands for--Funding Engaging Actions with Sustainable Tactics--and buy your cash-only tickets at the door.
XPACE Cultural Centre (2-303 Lansdowne Avenue), January 27, 2013, 6PM $20-$30

A Woman of No Importance
Director Paul Hardy drags Oscar Wilde into the era of big hair and shoulder pads with a 1980s adaptation of A Woman of No Importance. When young Gerald Arbuthnot is offered a position as the traveling secretary of Lord Illingworth, an English gentleman, his mother objects, secretly knowing that Illingworth is the boy's father. With '80s pop music and neon clothing setting the milieu, Mrs. Arbuthnot must keep the truth from her son by preventing him from taking the job. The play runs until February 9th with tickets available through TO Tix.
Alumnae Theatre (70 Berkeley Street), January 25-February 9, 2013, 8PM $20

BeerProv - Arctic Edition
Twelve comedians, $12, beer, and piano accompaniment makes for one silly winter night at Comedy Bar. BeerProv, the monthly short form improv competition, hosts its Arctic Edition in honour of this week's freezing temperatures, with the performers participating in improv games for a chance to be crowned champion so that they may drink from the Mug of Champions. Warm up with a few beers and some giggles as comedians are publicly shamed for your amusement at BeerProv this Friday night.
Comedy Bar (945 Bloor Street West), January 25, 2013, 10:30PM $12

HIGHER LEARNING: Arc Productions on The Making of Halo 4: Forward Unto Dawn
Visual Effects Supervisor Terry Bradley has worked on films like Doctor Doolittle, X-Men and Nutty Professor II but he sits down at the TIFF Bell Lightbox this Friday morning to discuss his work on the Arc Productions team as a leader in the visual effects production of The Amazing Spider-Man and Halo 4: Forward Unto Dawn. Bradley will complete a presentation with a behind-the-scenes look at the making of the Halo 4 webseries before engaging the audience in a Q&A session. Tickets are free but are distributed on a first-come, first-served basis.
TIFF Bell Lightbox (350 King Street West), January 25, 2013, 11AM Free

Darkside of Oz
Darkside of Oz returns at The Projection Booth with the screening of the classic 1939 Wizard of Oz film in one of Toronto's classic moviehouses. This 420-friendly event will feature a live performance by a local band beforehand, with Pink Floyd's Dark Side of the Moon album played in full, just as the stoners of the '70s would have wanted. Following the screening--during which beers will be served--indie shorts by local filmmakers will be played. This is an all-ages event, so toke responsibly.
The Projection Booth (1035 Gerrard Street East), January 25, 2013, 9:30PM $10

For more film listings, check out our This Week In Film post. 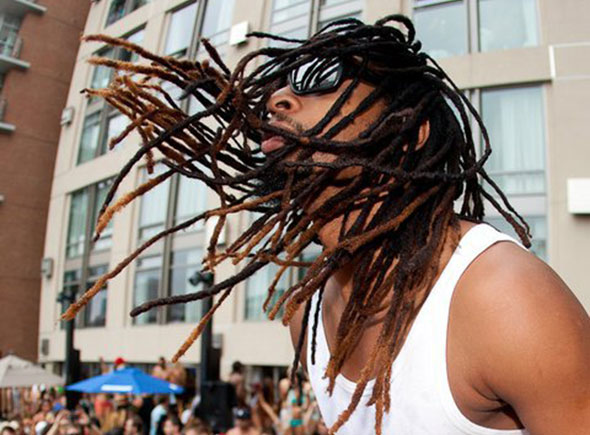 Lil Jon
Lil Jon has collaborated with The Ying Yang Twins and Usher, but now he's playing the DJ circuit, making a stop in Toronto this Friday night at Cinema for his "Let's F****** Lose It" tour. Resident DJ Andy Warburton will open before Lil Jon hits the stage around midnight for his DJ set. Tickets can be purchased through Uniq Lifestyle, but all ticketholders must refrain from yelling out, "YEAH!" repeatedly.
Cinema (135 Liberty Street), January 25, 2013, 10PM $16.95-$22.60 in advance

livemusicTO Presents: The Envy, Cai.Ro & More
livemusicTO hosts four bands at The Garrison this Friday night, just because it's a Friday night and we're all alive and able to enjoy the music. The night's headliners are The Envy, a local rock band that spent 2011 and 2012 touring with KISS on their "Hottest Show on Earth Tour." Supporting The Envy will be the alt folk four- (sometimes five) piece Cai.Ro, followed by Hotel Royal and Benhur. Tickets are available through Ticket Scene. This is a 19+ event.
The Garrison (1197 Dundas Street West), January 25, 2013, 9PM $12 in advance

Don't Trust Anyone Over 30
Anyone whose parents grew up in the '60s and '70s has heard this one many times--don't trust anyone over 30. Photographer and artist Dimitri Karakostas takes the adage to heart, compiling a book of photographic works by artists in their early to mid-twenties. Don't Trust Anyone Over 30 launches with an exhibit and party at Creatures Creating this Saturday night, with the nine local photographers who contributed to the book exhibiting their personal zines, merch and work alongside the book, which will be for sale at the gallery. The party is free but if you can't make it, the book will also be selling online at Blood of the Young Zine.
Creatures Creating (822 Dundas Street West), January 26, 2013, 9PM Free

Pineapple Express Shop
The creative minds of Miracle Thieves take on Filipino culture and tradition with this weekend's Pineapple Express Shop. Pineapple Express is a 3-day sale that will offer mangopeeler and wearable prints for purchase, alongside Filipino treats and drinks. The public is invited to stop by the social events that take place throughout the weekend to lend support to a local artist family that will be retreating to the Philipines to assist in the rebuilding and maintaining of the T'boli School of Indigenous Knowledge & Traditions (SIKAT).
Miracle Thieves (249 Crawford Street), January 25-January 27, 2013, 1PM Free

Shop for Jayu's 2013 First Call
Shop for Jayu introduces its 2013 jewelry line with First Call, a collection sale and show at Artscape Triangle Art Gallery in the west end. Metals, geometrics and Victorian inspirations will be featured this Friday afternoon during First Call, with shoppers invited to view the Korean-created collection while watching a short documentary, titled Gumijune, which tells the story of the young female orphans that created the pieces. The sale runs for one day only, closing at 9PM Friday night.
Artscape Triangle Art Gallery (38 Abell Street), January 25, 2013, 12PM Free

Toronto Design Offsite Festival Closing Party: Love Design Party
TO Design Offsite Festival will have come and gone by Saturday, and with the end of another year of the festival comes a giant closing party. The Love Design Party will take place in the space where the Gladstone Hotel's Come Up To My Room exhibit currently sits, with installations by Department of Unusual Certainties, DJs and dancing. The party is free but booze is not. Come prepared for a messy time.
The Gladstone Hotel (1214 Queen Street West), January 26, 2013, 10PM Free

For more design events happening this weekend, check out our Design Offsite Festival, Come Up To My Room, and IDS 2013 previews.

Blankets & Brews: The Stop's Beer Garden
Everything Canadians love about winter will fall into place at Artscape Wychwood Barns this Sunday. Amsterdam Brewery will feature three of their brews while Ksong Taco will sell their Toronto-famous eats. A firepit will be set up with marshmallows on hand for roasting and blankets will be distributed to cuddle up with someone special. Best of all, if these winter temperatures continue, the skating rink will be open for all. Admission is pay what you can, and all food and drink is priced at $5 apiece. Cozy up!
The Stop's Beer Garden (601 Christie Street, Barn #4), January 27, 2013, 1PM PWYC