Weekend events in Toronto is our guide to events happening every Friday, Saturday and Sunday. Watch for it here on Fridays around midday. Here's what's happening in Toronto this weekend, June 22-24, 2012.

MEC BikeFest
Join fellow bike enthusiasts for a daylong celebration of all things related to cycling. Organized by MEC, you can ride your bike to the festival and take advantage of the bike valet parking (ha!). Enjoy bike demos, free repairs and tune-ups, cycling retailers and exhibitors, and $5 workshops and clinics, with proceeds benefitting Cycle Toronto.
The Distillery District (50 Mill St.), June 23, 11 a.m., free

Pride Toronto
The Pride festival starts to warm up this weekend with parties and events, and it's not just any ol' celebration. Featuring incredible outdoor entertainment such as the Pride Parade, Dyke March, outrageous parties and live events, the weeklong festival has to be seen to be believed. Double-rainbow.
Various locations around Toronto, June 22-July 1, check here for exact event date and times.

TD Toronto Jazz Festival
The city gets set to welcome around 1,500 jazz musicians from Canada and abroad, and representing a wide range of musical styles--from smooth, to experimental to modern jazz--over the course of the 10 concert-packed days. Don't miss festival opener and headliner Janelle Monae tonight at 8 pm in Nathan Philips Square ($62.50). For more info on the Toronto Jazz Festival, check out our preview.
Various venues, June 22-July 1.

Friday Nights Live @ ROM
This Friday will see the final instalment of Friday Nights Live and will offer guests the opportunity to preview the ROM's new exhibit Ultimate Dinosaurs: Giants of Gondwana a day before it's official opening, for an additional $10. Enjoy the sounds of iDrum, as well as food and drinks.
The ROM (100 Queen's Park), June 22, 6 p.m., $9

Crush Party Pride Edition: Let's Paint with ALL the Colours!
The Central invites you to kick-off Pride Week with a major flirty party. Grab a drink, reap the rewards for showing the best rainbow pride, and step out of your comfort zone with hosts Caitlin K. Roberts, Jesse Rae West, Ness Fraser, and Khadeja Wilkinson.
The Central (603 Markham St.) June 23, 8 p.m. cover is $5.

For more comedy listings, see our This Week in Comedy post.

Ring my Bell
In dedication to Bike month, the Deadly Nightshades invites you to the opening exhibit of Ring my Bell. This exhibit will present an athletic-and-artsy mix, and will highlight bike culture, art and fashion including on-site sewing, wearable art and of course, dancing. Bike lovers, take note!
Method Lab (148 Augusta) June 23, 3 p.m. 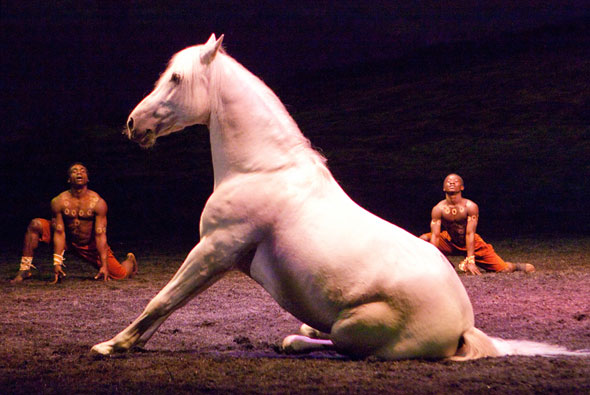 Haim Goldenberg - Voyage to Your Mind
Mentalist and GoldMind T.V. star Haim Goldenberg invites you to one helluva brain-picking evening. Topics to be discussed include mind-reading, telekinesis and more! Get ready for mind-games and an interactive show that promises to make your jaw drop.
George Ignatieff Theatre (15 Devonshire St.) June 24, 7:30 p.m., early bird tickets are $35.

Cavalia - Odysseo
Set under the largest big top, on the biggest stage, with the greatest number of horses, Cavalia lives up to the idea of go big or go home. This stunning production will leave you breathless as you witness the marriage of equestrian and stage arts with high-tech theatrical effects.
Under The Big Top Toronto (429 Lakeshore Blvd E.) June 22, 8 p.m., for ticket prices check here.

Porter Robinson: The Language Tour
Electronic music producer and DJ Porter Robinson returns to Toronto for a night of heavenly beats and celebration, on a tour inspired by his hit song "Language." Accompanying Robinson's youthful electricity will be performances by Mat Zo & The M Machine.
Sound Academy (11 Polson St.) June 22, 10 p.m. to 2 a.m., tickets are $10.

Parkdale Film and Video Showcase
Started in 1999, the showcase will feature film, video and media art by artists in the Parkdale community. The opening production will highlight classic screenings of local films and illuminate the diverse practices of Parkdale-based artists.
The Gladstone (1214 Queen St. W) June 22, 7 p.m. to 9 p.m., all programs are pay what you can.

For more food news, check out our This Week in Food post.

Summer Special
Honest Ed's is best known as a discount shopping destination, but for the next few months, it's also going to be the subject of an art series that's inspired by its trademark signs and show bills. The show features several Toronto artists who have created site-specific installations based on themes such as commercial signage.
Koffler Gallery Off-Site at Honest Ed's (581 Bloor Street West), June 21-November 11, for daily hours check the gallery page.