Toronto through the eyes of Korry's Saul Korman

Saul Korman has been dressing Toronto's "Gentleman" for 60 years. He's an unabashed advocate for investing in quality clothing (so put away those $99 suits), a familiar voice on local talk radio stations, and a staunch Danforth Avenue devotee.

Korry's Clothiers To Gentlemen began as a father-son partnership at Coxwell and Danforth, moving further west when Saul took the helm. It has since been known as one of the men's suits stores in Toronto, touting a wardrobe of Hugo Boss, Canali, Coppley, and its house Roberto label.

Stepping into Korry's, in some ways, is like stepping back in time. While the clothing styles, needless to say, are all up to date, staff members still ask if they can hang up your coat, get you a coffee, and make small chit-chat about the weather.

Perhaps that's still the way of some upscale clothiers in the city, but to me, it seems too few and far between.

Saul begins our interview by asking me some questions ("Where did you go to school?" "Where do your parents live?" "Married?") before settling into his desk chair and telling me about the Danforth's early days.

What was Pape and Danforth like when you moved over from Coxwell?

It was a thriving area. It had Tip Tops, Jack Fraser, great lady stores, Town Talk. And everybody here, all of a sudden, they started to leave. This was 1965. They started to go to the shopping centres.

And then a Greek guy opened a restaurant here. And then that started to change. So now the Greek community started moving in. When one restaurant opened, his cousin decided to open another restaurant, the dishwasher opened a third. And then it became a great, thriving Greek area.

I was thinking you might ask me that, so here, I printed out these for you. A customer sent me that. You can take it, but I'd like to have it back. 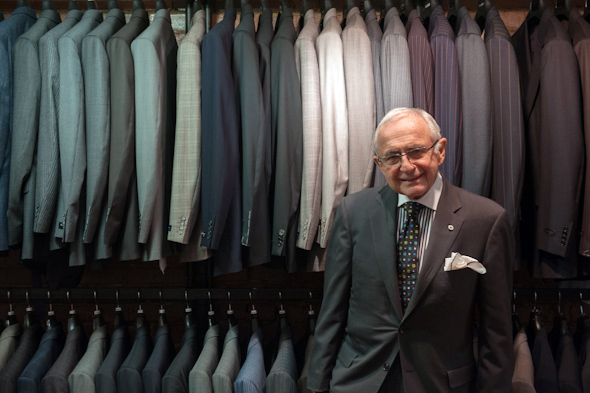 Did you ever think of moving Korry's to another location?

In 1972, I was going to go to Yorkville. I went where Rainbow jeans is, and right there there was a luggage store and I was going to rent it. And they wanted $22 per foot. But I couldn't negotiate out of my lease, and I had two years left.

When the other clothing stores started moving to shopping centres, why didn't you join them?

Because I was stupid. First of all, I did well, and I started to live a little better. I adopted a second kid, bought a little house at the same time, just bought a building, had mortgages up to here. But parking in this area has always been a problem. If I could do it again, I might have done it in a different location.

How do you get the word out in a city as saturated with clothing options as Toronto?

Actually, I have a big market in Hamilton that comes here to buy clothes! 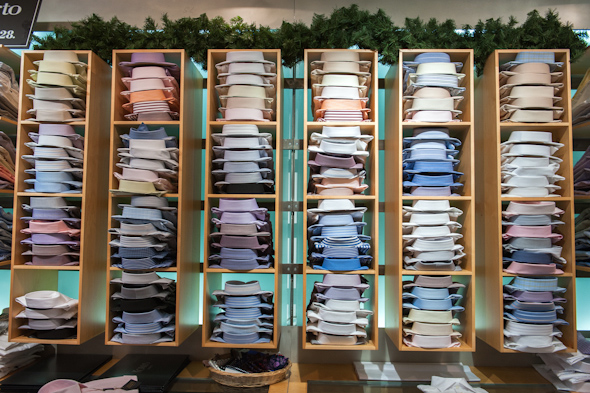 How do they hear about you?

Radio! I really started with radio. I did every talk show. And then I went across Ontario doing speeches, saying "If you've got creases in the suit — puckering — don't blame the cleaner, blame the quality of the suit."

And now we're doing other things — we're updating our website; it'll be open in a week. We're trying to build Twitter; I don't understand all of this, but I know it works.

How can new clothing stores in Toronto survive and thrive for the long haul?

OK. Let's say, a guy owns a retail store. He can't get into a plaza. There's no way he can afford it. So now he opens a store. So he wants the names, he wants to buy Boss — big, big label.Boss is only going to have their own retail eventually; Boss is not going to want to sell to me.

If I didn't have my own private label, I'd be in trouble. Why do you think I built Roberto? The manufacturers all have retail outlets now. If I didn't come up with Roberto, I wouldn't be in business today.

How do you think Danforth will change over the next few years?

That's the hot area, not us. This used to be, because of the fruit stores. The Greeks are moving out. They've sold their homes and made money. Now they want to come back and they can't afford to come back.

I think it's going to change. I think the big Greek restaurants are going to go because they can't afford to stay. [...] We gotta get a Keg. I'm working on that. 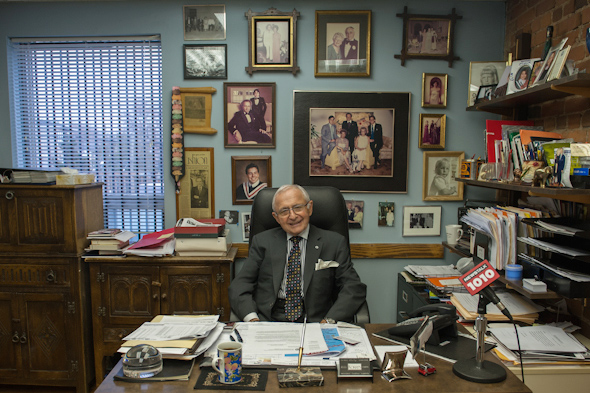 What area do you live in?

Are you a coffee drinker?

Where do you get your fix?

I go to Starbucks every morning

What paper do read?

The Globe and the Post. I prefer the Globe, even though my column is in the Post.

I'm trying to think of where my wife shopped. I think Holts is pretty good.