Get to Know a Chef: Carey Wesenberg, Littlefish

After leaving the film scene to pursue a career in food, chef Carey Wesenberg found that running a kitchen is a very similar production process. Building a set, casting the characters, and adapting to changes translated well into establishing the beloved Junction brunch spot, Littlefish. With 20 years of culinary experience from his first job at the Hazelton CafĂŠ, owning the old Mockingbird bar on King West and, later, Okay Okay Diner, Wesenberg has learned a thing or two about handling hordes of hungry patrons without sacrificing the quality of his dishes.

No, not at all. Originally, I wanted to be a filmmaker. I didn't finish film school and I needed a job, so I went to work at a restaurant. I moved up the ranks really quickly at that place, then decided I wanted to learn how to cook, so I went to George Brown. I worked for some other people after that and then eventually opened my own place.

I'd probably say the first job that I had when I had my own station. It was at a small, French bistro (Hazelton CafĂŠ). I got to make whatever pastas I wanted, work on sweets and desserts, and I got to work with some really great French people; it was a great learning curve.

What's the biggest lesson you learned working at the bistro?

Just a real respect for food. The basis here is that sometimes you have difficult customers, and sometimes you have people who have an idea of what they should have on their plate, or at least their understanding. That's why I'm very anti-Food Network because you have a lot of people who think they know food. But until you actually cook it in a commercial enterprise, it's very different. Regardless of what the customer's like, you can't take it out on the food. You can't abuse or wreck the food for them. The food is kind of passive and really isn't involved in this at all. 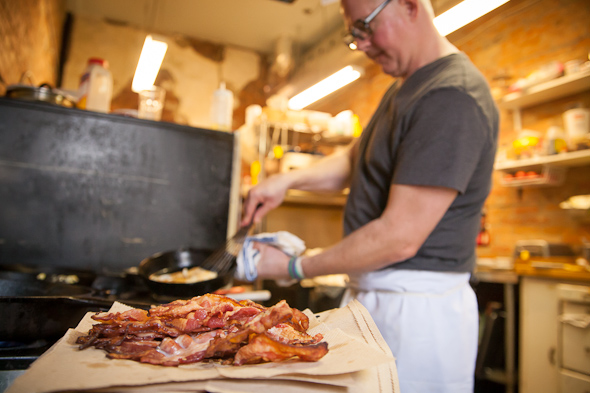 So is the customer not always right?

The customer is not always right. Not every restaurant is for every person. People have different tastes, so to go to one restaurant and have one experience and go to a similar restaurant and think you'll have the same experience as you had at that other restaurant--it's not going to happen because all restaurants aren't the same. And the same thing goes with reviews; people think they are going to have that experience, and sometimes they don't, and they become very disappointed. I think you should be open to the restaurant that you're in and not pre-judge it before you've had something to eat there.

Why a brunch restaurant (and not dinner)?

I like breakfast. There are enough dinner places in the city. There a lot of breakfast places , too, but I just found that after we had the bar, I wanted to have a diner, and we did that in Leslieville. I found a real knack for cooking eggs, so it came quite easily.

Can a breakfast place be a destination dinner spot as well, or do you have to focus on one?

I think you can do a breakfast place and a dinner place if you want to. It makes for a very long day. It could be exhausting, because you have to do early mornings, and evenings as well. The only problem I can see running into is making sure that at the end of the dinner service, everything is cleaned and organized enough so that you can swing into a breakfast the next morning.

Is that something you would ever consider doing?

A lot of people ask for us to do dinners. At one point we were doing a supper club around four times a year, and it just took a lot of energy. Dinner takes a lot more energy than a breakfast and lunch because you're cooking so many things to the minute. I just found it very exhausting, so I stopped doing it.

How do you properly cook an egg?

Don't overcook them. A lower heat is better than a higher heat, and you have to remember that eggs are a protein; even when you take it off the heat, it still continues to cook. 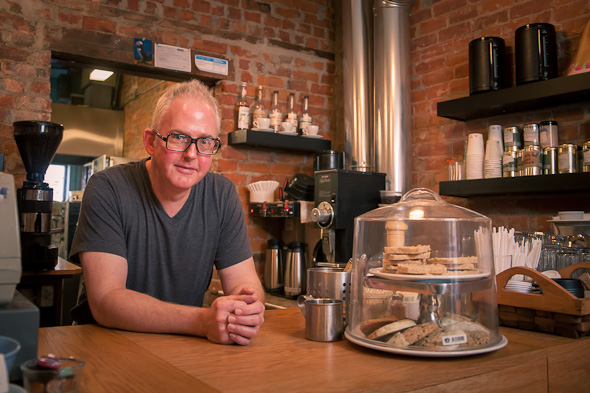 What's the secret to a great brunch?

Good coffee, great service, great menu items that have a variety to choose from. That's probably it; you just want to make sure that you have enough items to appeal to a large audience, and that you can execute very well.

How does the brunch service typically look on the weekends?

It's really controlled chaos. There's usually a lineup with people trying to establish where they fit in and how long it's going to be before they get a table. It's a very small room, so once we get a lot of people standing here, the staff starts to chuck them outside or ask them to go for a walk and come back. But people in here are very calm, relaxed, and happy, and there's a wide variety of people in here.

What brunch item to you hate cooking the most? The least?

Even though it's one of the simplest things to make on the menu, I gripe a lot about making the oatmeal. I can't think of what it is; I know it's a good oatmeal, I know the things that go on it make it great, and I understand why people like it. I wouldn't put it on the menu if I didn't think it was a good option to have on there. But I don't think there's a lot of watchpoints during the oatmeal, so I probably don't find it as challenging. I like making the Eggs Benedictine and the Eggs Littlefish. Anything with poached eggs.

How's the restaurant scene evolving in the Junction?

The neighbourhood responded really well to the restaurant. When we came in, the restaurant scene was just starting to develop; there were a few that were well-established here. But the neighbourhood was in transition; there are a lot of new families moving here, and they're more prone to go out. A lot of the older families were moving out to the suburbs, and they weren't used to these new options.

I don't know. I think we're just going to run this place a little longer and see what comes up. It's hard to say what's happening in Toronto in terms of the economy. I think we're in a really good area in the city, and it works really well for us right now. It would be nice to have a bigger place, but we'd have to pay a bigger rent. If the space opens up beside us, we'd consider expansion especially with the boulevard patio space. But for now, the place is good for me. With the baked goods, we can change it up as often as we want, and I do some candy things and specials as well. We can keep it interesting that way. 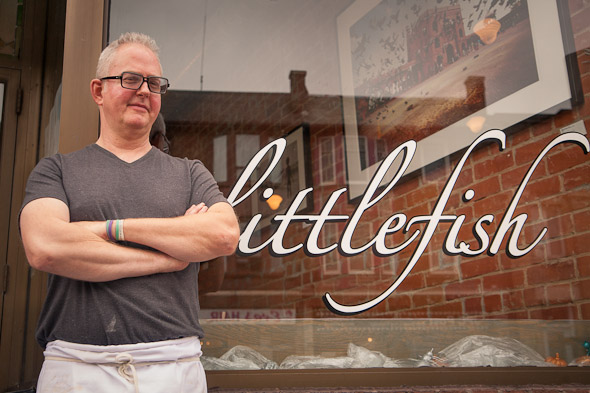 A chef that inspires you? Keith Froggett

What's something people would be surprised to find in your fridge? Hot dog mustard