Get to know a Chef: Jonathan Poon, Chantecler

After a strenuous search for the right location, Chef Jonathan Poon has finally established himself in the Parkdale community. His tiny restaurant, Chantecler, now showcases his innovative mashup of flavours, and is a hub for chef collaborations which he began while he was still on the hunt for permanent digs. Poon declares he isn't afraid to continue challenging himself and taking risks which could include handing over the reigns at the restaurant sometime in the next year or two.

I wanted to do other things before becoming a chef, but I started cooking when I was pretty young as an interest, and I think that quickly consumed my life, and I decided to do it on a full-time basis. I was in high school cooking a lot and working part time in kitchens, and I actually failed an exam because I spent the night baking bread instead of studying.

I actually started with more interest in pastry. I did a lot of baking - bread baking was something that I was really obsessed with. I would go online to forums and read everything, try it out, and learn to bake. When I started working in kitchens I just learned as I worked. During an interview with Chef Claudio Aprile, I baked him a loaf of pine cardamom bread, and he loved it. I was nineteen, and the pastry chef at the time was David Haman, so I worked with him and that was pretty influential. He's one of my best friends and the person I would consider to be my mentor. When he left I took over as pastry chef.

What is your favourite dish to prepare?

I like working with seafood a lot; I prefer seafood to meats, and I think it requires a much more delicate touch. It takes a lot of confidence to work with fish, and I don't think a lot of people know how to cook fish properly. I'm very proud of my kitchen, because I think that we handle fish better than anyone else in this city. Handling fish is not just cooking; it's storing, cleaning, and I haven't seen anyone doing as well as this kitchen, and I've been to a lot of kitchens. I'm sure when Momofuku opens or when that crazy restaurant down at the Shangri-La does maybe they'll be doing incredible things, but until then...

What's the worst experience you've ever had working in the restaurant industry?

You get your bad days, but I think it might have been a time when I was working at a very busy restaurant, and I pretty much had a mental breakdown in the middle of service. But my mental breakdown isn't crying - it's more becoming a big fireball and throwing things at everyone. That was probably the worst, because it's like your worst side coming out. And you can't lead a kitchen with fear; you need to gain respect and keep calm.

We set out to open a restaurant serving food that is unique, and I think we've definitely done a pretty good job of achieving that in terms of the style of the food. It's something of its own rather than a lot of restaurants that are doing a lot of great things - and everything tastes good - but they're just doing what's "cool" around the world right now. A while ago we were doing a roasted Chantecler chicken with poached egg and dried oysters, a perfect example of incorporating the French and the Asian, and it's something so unique that I haven't seen anyone else do.

The Italian influencelikely comes from the fact that the first serious restaurant that I worked at was an Italian restaurant, and I spent some time in Italy - it's influenced me a lot. 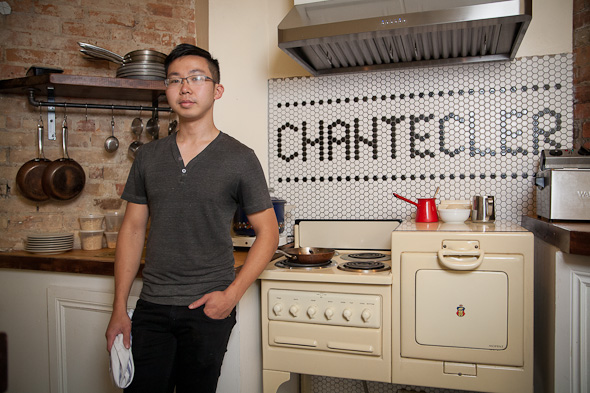 After your Monday dinner series, what made you decide it was time to settle down in your current location?

My business partner and I decided to open a restaurant before we even started doing those dinners. It was actually at a point when we were having such a hard time finding the right spot that I decided I would start doing the dinners because I had been waiting for so long. I was working part time, but it was just different because I was in a position where I felt like, even though we were doing good cooking, we were always executing someone else's vision. You have certain opinions that you develop over time.

It was at that point where I felt there was nothing else for me to do in this city if I was going to stay. And of course being young and ridiculously poor, we were looking for something very specific: tiny and cheap. We landed here just out of luck, really. It was the fifteenth spot that we looked at in fifteen months. We put in a bid for quite a few spots, but to be honest looking back, we're kind of lucky that those other ones didn't work out.

In the next year or so, as far as I can tell, I'm going to be around. I really want to take the restaurant to the next level. We're looking towards getting a patio in the back of the restaurant, so hopefully it will be ready for next summer. We'll keep doing fun things and just having a good time.

As much as I am invested in the restaurant (financially and emotionally) I don't ever have a problem leaving. So maybe I'll leave after a year, maybe not. It really all depends on my mood. I opened the restaurant with the intention to leave it, and I want to be able to give it to someone that is up and coming. 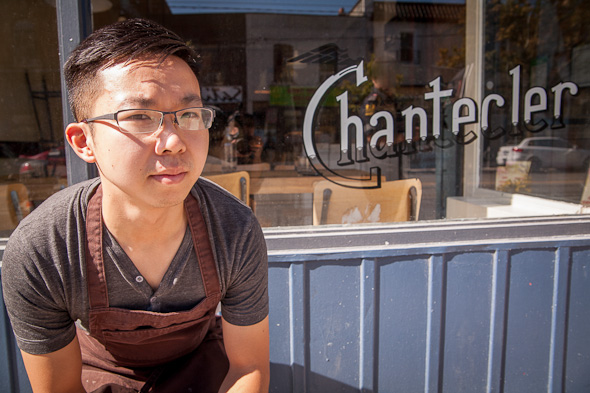 A chef that inspires you? There are so many, and they inspire me in different ways

What's one dish you can't live without? My mother's dumplings

What would people be surprised to find in your fridge? Miracle Whip

One food trend that needs to end? Obsession with pork