Get to know a Baker: Graham Bower, Paulette's Original Donuts and Chicken

Paulette's Original Donuts and Chicken might be known mainly for its eponymous, and rather narrow, menu items, but fortunately, they're baked perfectly each time.

This week, I sat down with Graham Bower, one of the masterminds behind the new Paulette's Original Donuts and Chicken - who is also the chef at Delica Kitchen - to discuss his history in the food world and his recent baking ventures. He shared some prized donut-making secrets, as well as some actual donuts! Needless to say, deliciousness ensued.

Yes, I've always had an interest in anything at all related to cooking. I hold a degree in baking and cooking, so I'm primarily the chef here. I oversee everything but I also take the lead on all the baking recipes. I started out mostly in fine dining and kind of worked my way up the ranks there, then I decided I wanted to do something a little bit more casual and I ended up at Delica at Yonge and St.Clair. 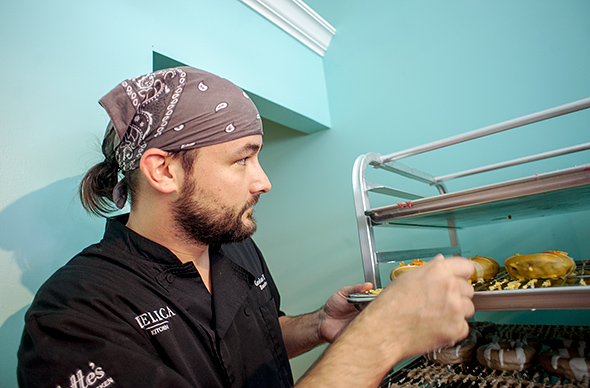 Just in school, and I didn't really do it professionally until Delica came along, and Paulette's. I went to Nova Scotia Community College. I've got a degree - a cooking certificate - and the baking is actually not pastry, it's International Boulangerie, which is about 75% bread baking and 25% pastry.

How did you meet the owner, Devin Connell?

We're really fortunate. A lot of chefs struggle when it comes to working with owners because everybody's taste is different, and everybody's view for the restaurant is different, but Devin and I wanted the same things from day one. We wanted to do cooking from scratch, and we wanted to do high quality, clean flavours. So we just got lucky and matched really well in that respect. 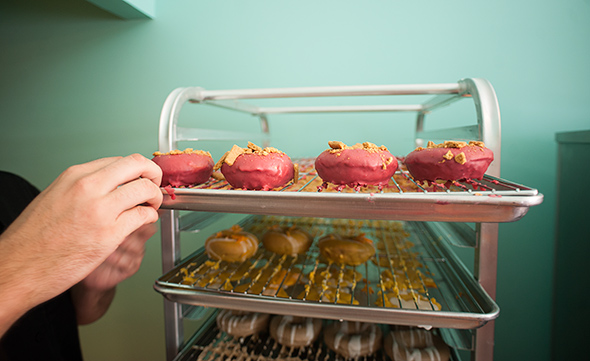 What sort of research did you do before opening the donut shop?

We actually went down to New York, and in 36 hours we toured probably 17 fried chicken and donut places. We did a lot of recipe testing - a lot of it was just trying other people's recipes and tweaking them our way. For a week we just made donuts and ate donuts, but we ended up with a recipe that was really like nothing we had found anywhere else. It's kind of evolved.

So is it a yeast donut or a cake donut?

Cake. Cake all the way. When I was younger, my grandfather used to bribe me into going to pick up the newspaper with him and I'd get a cake donut, so it just kind of harkens back to my childhood.

How many flavours do you offer at Paulette's?

Right now, we do six flavours of donuts and two flavours of donut dots, which are like donut holes. We're going to constantly rotate, and we're planning special flavours for holidays, as well as limited edition flavours. 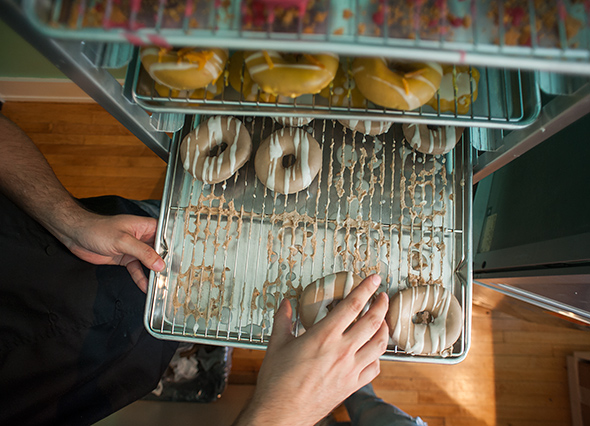 Is this the beginning of a wave of gourmet donut shops opening in the city?

I think so. I mean, I know of other people who are opening up donut shops. People say it's like the next cupcake. The trend started about a year ago in a lot of fine dining restaurants. They started doing donuts - or beignets or donut holes - for desserts, and now it's trickling down to the mainstream.

In what ways do you see the business growing?

We'd like to do more Paulette's. Not so much as a franchise - we really want to retain control over the quality and consistency of things - but we could definitely see ourselves doing more units in the future. We don't want to expand the menu. We like the simplicity of donuts and fried chicken.

Going into it there was a big discussion as to what sides we were going to have, or whether we were going to have sandwiches, and we came to the conclusion that we really wanted to focus on doing 3 or 4 products, but doing them absolutely perfectly every time. The more you add, you dilute what it's all about - which is the donuts. 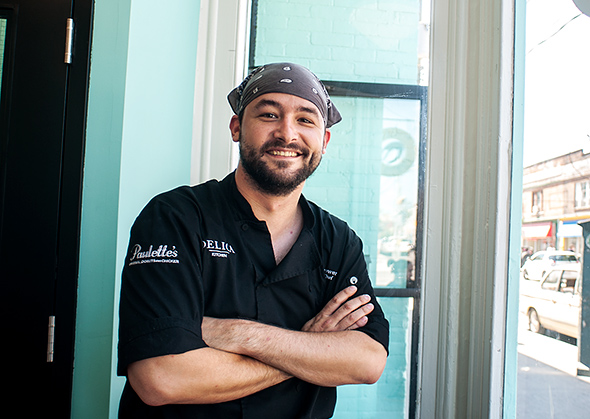 Best beverage to drink with a donut? Black coffee

Cookbook of the moment? The Joe Beef Cookbook

For more baker profiles, visit our Toronto Bakers Pinterest board