Get to Know a Chef: Craig Harding, Campagnolo

In a city where Italian restaurants are ubiquitous, chef Craig Harding is turning Campagnolo into anything but. The restaurant, nestled on Dundas West near Bathurst in a casual space with some serious food. Featuring everything from his love for bitter greens to nose-to-tail dining, Harding is ready to amaze even his toughest diners. But don't worry, the dishes still pay homage to his Nonna, who's still his greatest mentor in the kitchen.

I took a cooking class on my last year of high school and I had an amazing teacher who was European-trained and at the end of his career. I was the only student in the class who took an interest so he kind of took me under his wing and showed me a bunch of stuff and after that I was very interested in it. I thought it was a lot more than just cooking family dinners at home. It was a serious profession and he kind of instilled a lot of classic techniques even at that early level.

He was one that started it off, but I think the cooking that I enjoy most today and I try to emulate here is a much more rustic approach, trying to evoke what it means to gather with friends and family and enjoy a meal that's very seasonal and simple in the approach. I think my grandmother is a big reason why I am here.

Just the lifestyle; she grew a lot of fruits in her yard, and her friends would always be coming over with this bitter green or vegetable. Obviously some of her dishes I completely ripped them off, and some of the things that she does I still do. 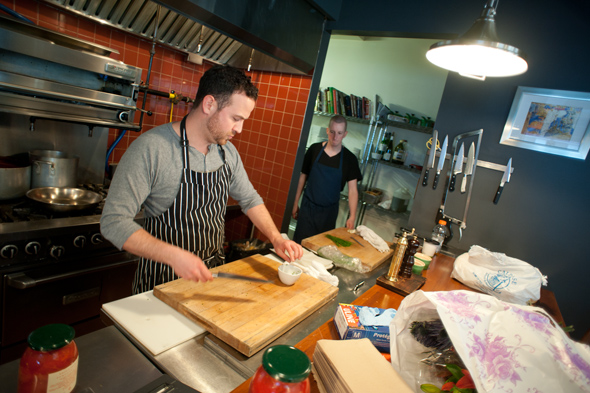 I love making a fresh egg pasta dish. The act of making it never gets old, and you can change the flavor combination within and the shape of the pasta countless ways. You could make a different pasta every day for the rest of your life and probably never make the same one again if you really wanted to.

Starting off with the dough, I think you've got to use egg yolks. For every kilo of dough we use about 26 egg yolks, so you have this rich, yellow dough that has a lot of bite to it, so it's a little bit more al dente. Make sure the pasta doesn't get too dry: fat is so good on pasta, whether it's pork fat (guanciale), olive oil or butter. That's pretty much the key, and proper seasoning.

It's cheap and it's tasty. I hate thinking about people going into grocery stores and just buying ribeyes and pork chops all day. You've got to think to yourself about where all the rest of the stuff is going. I appreciate trying to find use for the stuff that other people don't want; it's amazing and that's why I like it. There's such a variety in it; different types of offal all have different qualities and characteristics.

What did you learn most from your experience at Four Restaurant?

That was the first restaurant that I ever was asked to open as the head chef. So I had experience dealing with everything from choosing the plates, meeting with different suppliers, designing the kitchen...I had a hand in a lot of it. It kind of gave me some sort of comfort level here. I had some kind of direction when I knew where to go when we were starting. And even the concept...it was such a narrow and focused concept. A lot of restaurants just open, and nobody knows what they are, and I wanted this to be different. I wanted this to be more focused and specific. 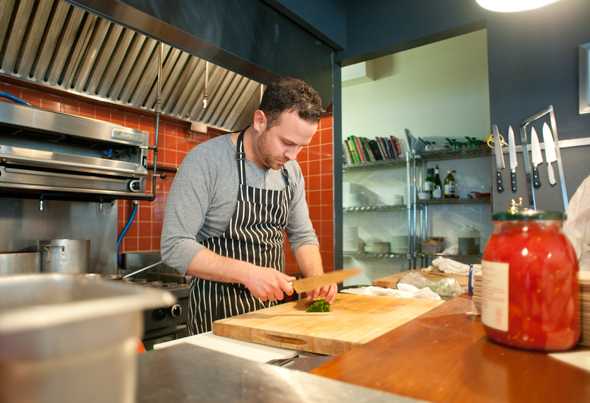 It's a lot more varied. The thing with restaurants on Bay St. is that people go to them because of the convenience. There are very few restaurants on Bay St. that are destination points. The difference is that people here can be more demanding because they've heard about it, they've read about it, someone has told them about it, and they are coming here for an experience. So they want to be wowed every time.

A lot of businesses on Bay do their huge numbers at lunch, and they're slower at dinner because everyone leaves the core and goes home. So I feel like there's more pressure here: the clients are pickier at this place and it's a different clientele for sure.

What's the worst experience you've had working in the restaurant industry?

One time at Far Niente, the power got shut off in the middle of the night so the temperature went up into the danger zone for hours. Basically all the product in there was toast. It was right upon the weekend, so there was all kinds of prep, and we were just throwing out lobsters, steaks, fish - thousands of dollars worth of product. Not only the cost of it all, but just having to throw out all of this good food was terrible.

Any future plans for the restaurant you can tell us about?

I'm just going to take over all the Coffee Times in Toronto - that's my plan for domination. The thing is that I have so much great talent here; I don't want to lose them, so I need to promote them, they need to grow, I need to open another place. Either that or we just keep cycling through people because they move on. And I don't want them to move on, I want to hang on to them. So I need to open another place to foster talent.

What do you like to do when you're not in the kitchen?

I like to watch movies. I like to go to my basement and just shut the computer off, shut the cellphone off and just watch HBO all night. Because I'm here so much, it's just nice to be at home. I love playing golf, drinking beer in the park, drinking coffee in the neighbourhood - I'm always doing that on my days off, doing that for an hour, reading the paper. And I like checking out other restaurants too; it's like a double thing: you're checking out the competition and you're saying hi and supporting your friends. 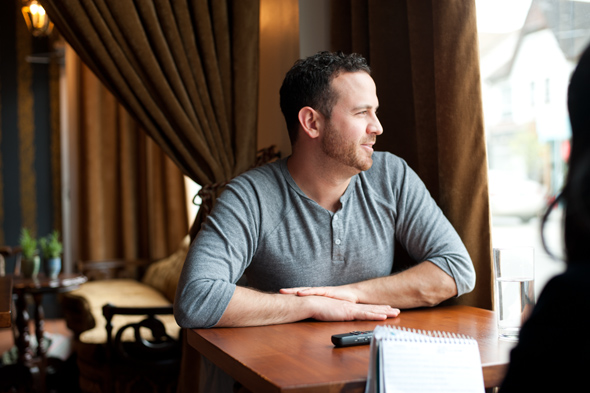 A chef that inspires you? Giorgio Locatelli

What would people be surprised to find in your fridge? I can't live without Jalapeno Tabasco

What's one dish you can't live without? Rapini with chiles and garlic

What one food trend that needs to end? Italian restaurants