Get to know a barista: Ami Spears of Jet Fuel

Jet Fuel has a bit of a reputation. I've worked in Cabbagetown, right around the corner from the coffee shop, for almost three years now. I've known people that have left the local cafe just about in tears. When I went in before the holidays for our scheduled interview, I was told that Ami wasn't in. When I inquired a little further as to when she would be in, I was brushed off, coldly. The shop isn't for everyone, but the regulars, especially cyclists, absolutely adore Jet Fuel - and for good reason. It's a calm atmosphere with some damn good coffee. When I was able to catch up with Ami the following week, we had the following conversation in the back of Cabbagetown's Jet Fuel.

I've lost count. Probably about 12 years. I actually started out at Starbucks in the States, in Austin. I was there for three years and then I moved to Toronto. There was a little break from coffee, but you never really lose it. So I've been here at Jet Fuel for about four and a half years.

Do you have a favourite customer and why?

Nice. Low maintenance. A lot of people ask for certain things and it depends on who you get here. Like some people will do somethings and some people won't. I'll do pretty much anything. We have a lot of regulars and it's about repetition. You get to know who wants what and know a little about them. I'm not a small talker. Like I don't small talk, I just make your coffee and hopefully you like it. Not a big small talker. I guess people might think I'm kinda dry or might think I'm a jerk. But I'm just kinda closed off at work.

It's just kinda automatic now. We have the pump grinder here so it grinds all-day. It doesn't grind each time you pull. You just pump it three times and it's the right amount. You just need to know how much pressure to give it. It's pretty automatic, I think.

Do you moonlight as a writer, actor, artist or adult film director?

I'm a musician. I also do a vintage collective. We just do vintage pop-up shops. Mostly clothing. On the musician side I play drums and bass and sing in my band. We're called Ostrich Tuning. It's a reference to a particular tuning in the '60s. It's like psychedelic, melodic; it's noisy at times. It's all jamming in the way of psychedelic. 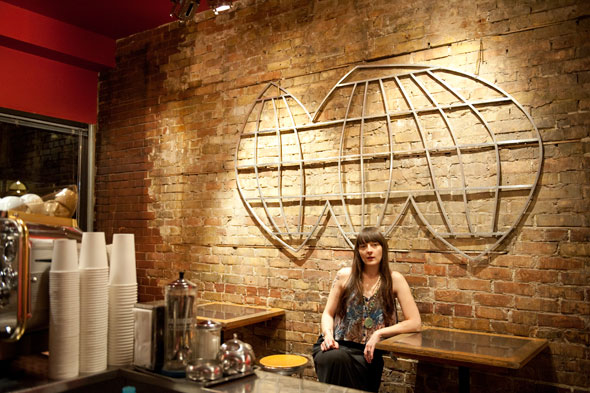 I have no idea. I'm not a very mysterious person. As for the customers, I still don't think anyone knows I'm married. I've been married for probably a year and a half now. Probably before that, people probably didn't know I had a boyfriend or fiance because we already lived west. He doesn't drink coffee so he doesn't get out this way very much. And again, I don't give out a lot of information. But if someone asks me, I'll tell. I have conversations with my customers all the time, but I'm not the one to be like, "Oh, by the way..." Probably most of my customers don't know that I'm married.

I like Tequila Bookworm a lot. I don't go there a lot, but anytime I do I really enjoy it. And their coffee has progressed over the years. I know a couple years ago I had a coffee and it wasn't that good, but it's really good now. I don't go out a ton, but when I do go out I like seeing shows, or playing a show. That in itself keeps me busy when I do go out. Favourite venue? I really like The Piston. It's on Bloor, it's also a lovely bar and in the back room there's a venue. It's kinda small but it's always really fun.

What's your favourite album to spin at work?

My go-to is "Unknown Pleasures" by Joy Division and then "Loveless" by Bloody Valentine, which I don't play a lot, because I think I've listened to it so much over the years. Every now and then I'll play it and it's just so good. And then a lot of Velvet Underground.

To take the nerves out of customers, what's the proper way to order an Americano?

People will come in and ask for a black coffee, and everyone here deals with it differently. I try to keep it simple. Like less words is less confusing. So I'm like, "Our regular coffee or black coffee is an Americano. It's water with espresso." I just break it down like that. Most people go for it. And our coffee does tend to be quite strong. Even I get cracked out on it - I can't drink more than one over six hours. 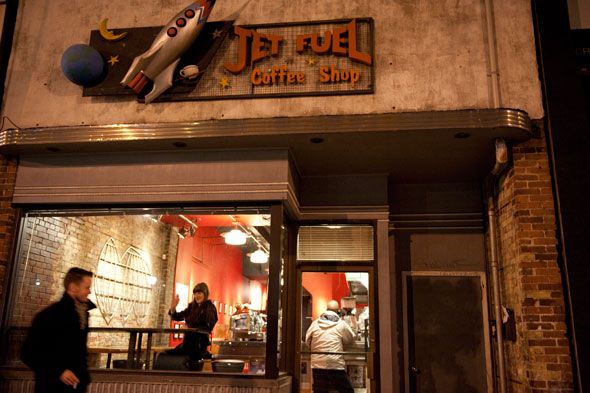 Dogs or cats? That's a tough one. I'd have to say cats, but it's very close.

London or Paris? I'd love to go to Paris. I think I'd prefer France.

Bikes or streetcars? Bikes for sure.

Rob Ford or Tim Hortons? Yuck. Both are yuck. I like Tim Hortons' muffins.