Toronto through the eyes of councillor Josh Colle

In October 2010, Josh Colle was elected to replace Howard Moscoe in Ward 15. Colle, a former Catholic School Board Trustee, is one of 14 new councillors to enter City Hall for what will likely be a tough council term. He's also the son of Liberal MPP Mike Colle, who represents the riding of Eglinton-Lawrence, which covers much of Ward 15.

Among the most important issues facing the new Ward 15 councillor are the fate of the Eglinton LRT and the Lawrence Heights Redevelopment Project.

Throughout his campaign Colle championed the idea of a city wide election for the TTC Chair, term limits for councillors and the mayor, and broader democratic reforms, which are ideas he hopes to bring to council in the near future.

Colle says he's determined to stay away from the bitter left-right divisions we've become used to. Only time will tell if he can deliver on this pledge, but his approach suggests he'll be a positive addition to city council.

On a lighter note, Colle's hobbies include following Toronto's live music scene. He frequents the Horseshoe Tavern, Lee's Palace, the Garrison, and Dakota, to see such bands as Gaslight Anthem, Best Coast, and Titus Andronicus -- though he admits his new gig at City Hall has eaten into his concert time.

In the first installment of interviews with Toronto's new city councillors, I sat down for a chat with Colle at his office earlier this week. Here's what we talked about.

You've been on the job for two months now. Can you tell me what an average day is like for you?

The one good thing about this job is that there is no average day, which makes it interesting. To start, I've been at City Hall a lot more than I will be when things settle down a bit...because of the budget. With the compressed budget schedule and it being a new term and a lot happening now, I've been down here a lot and in the ward in the evenings...So I'm in the community on the evenings and weekends, and in City Hall by day. But I think after this process I will start to be in the ward a lot more during the day too.

Rob Ford is trying to deliver the budget on a very compressed timetable. Are you happy with the way it's being handled?

I'm not happy with it. There are some constraints just because it's a new term in council and that makes things more compressed, and I get that...I'm fine with the amount of consultation they provided. What I want is more time to digest everything so that the consultation is more meaningful.

You give people [huge] binders...and stacks of them...but for a citizen they need some time to get through it...I'm happy to say what I think the impact might be on my constituents, but I want them to have the opportunity to have the dialogue, so my questions are more meaningful and my focus is more refined...That's the thing missing.

Do you think there are disadvantages to being a new councillor?

Sure, but everyone has a lot to digest and get up to speed on, so [new councillors] might have to balance a few more things, but I think the budget in itself is an overwhelming piece by its sheer size and the amount of information...The newer councillors just have the disadvantage of trying to get up to speed on a number of other things simultaneously... 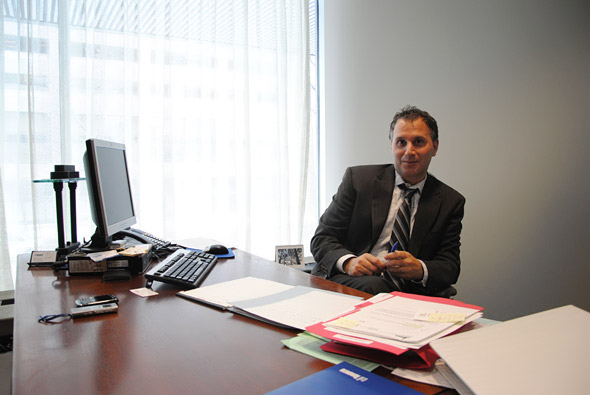 What's your working relationship like with Rob Ford? And do you think you'll be able to work well together?

We've met. I knew him a bit before from one of my previous jobs when I worked at the airport, which bordered his ward, so we at least know each other. But I haven't had a lot of interaction with him though, to be honest.

I might be na誰ve for saying this, but [being able to work together] is issue-based. On some things we can agree, and on others we won't and I'll try to sway him.

You've replaced Howard Moscoe as the councillor for Ward 15. Do you feel like you've got some big shoes to fill?

[Laughs] Literally big shoes...His presence is felt no doubt about it, especially when I'm out in the ward and talking to people. There's a lot of "Howard said..." or [there's mention] of a deal he struck -- things like that. But from my perspective I have a clean slate, so I don't feel any pressure or any need to fill anyone's shoes.

Your father is the MPP for the same area you represent municipally. What's it like to work with him, and do you think it gives you an advantage over other councillors?

I don't know, sometimes I think it doesn't [laughs]...There's a certain level of frankness we can have when discussing issues. We already disagree on some and that's fine, but certainly I have decent access I would suggest. Whether he hears me out more than other councillors I can't say [laughs]. I think we have a fine working relationship. You can judge based on your relationship with your own father -- just think about all the times you've disagreed with him, it's pretty similar here.

You've organized some community consultations regarding the Lawrence Heights Redevelopment Project earlier this month. Do you have a better idea now of what you'd like to see happen with the development?

I've had quite a few meetings up at Lawrence Heights and I struck a committee to look at the redevelopment...I set that up for a few reasons. The primary one was just to change the tone of the discussion. Falling in the midst of an election campaign made it more contentious and divisive than I think it should have been. So what this group is trying to do is to look at some of the areas of agreement, which are actually quite a few. The area needs to change; it's not good for anyone that lives in it or around it, and there's broad consensus around that. Now we're starting to work on some of the more specific details...

Some people want [specific density numbers], but that can be a pretty hollow victory if you do bad development. I want to make sure that with the increase in density we put in measures that mitigate against any negative impacts. So that could mean looking at transportation alignments, or sign guidelines...that's what I'm trying to get people to focus on.

You are on the Economic Development Committee. Do you have any specific policy goals you'd like to introduce to this committee in the near future?

One thing I want to have done...is have all departments look at things through an economic development lens -- that would include the TTC, planning, everyone. The other thing I hope to achieve is to create some more metrics to measure the effectiveness of our economic development strategy so we can refocus it as need be. I need some baseline information that says "2010 was really great; in 2011 we dipped a bit," so now we can ask the question "why did we?" I don't need to determine what those metrics are but tell me what they are so the layman, like me, can come in and assess whether we need to refocus...And I'll throw a few curve balls in here and there to make life interesting...but we'll save those for now. We need to be more bold and creative.

Considering the importance of the Eglinton LRT to your ward, what's your take on Rob Ford's transit plan?

I'm confident the Eglinton LRT will be part of that plan...If they want to go underground further west I'm open to that. I think the thing a lot of people forget is that the subway plans for Eglinton back in the mid-90s were actually going to come out above ground in the same place as the LRT would...even the subway would have gone above ground at that point because the engineering to get underground would have been so costly and there's no one being served there...I know there's some talk of tunneling more, and I'm open to discussing that, but my priority is that the [Eglinton line] not be delayed.

My concern with [Ford's] plan is that it will result in everything being delayed because it's new and will require environmental assessments and a lot of consultation and examining where the funding is going to come from. I think the last thing we need are delays. The good thing about the Eglinton LRT is that it's ready to go. 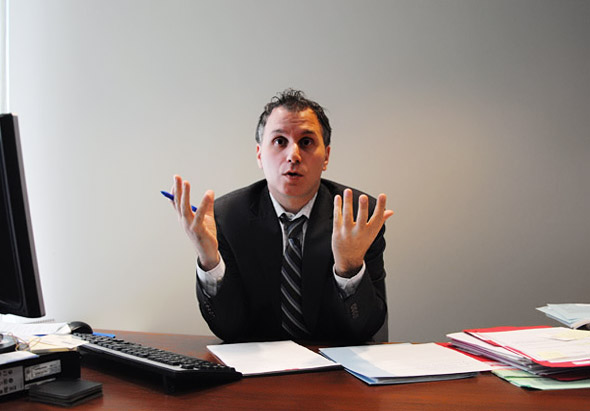 Don Cherry introduced Rob Ford with a very partisan speech. Do you think it reflects the atmosphere at City Hall?

I'm hoping not. I like to talk about the mighty middle and not the mushy middle, and I think most Torontonians are pretty practical and pretty reasonable. They actually want council to operate from a moderate middle position, and I think with the 14 new councillors we've elected and with some of the holdovers, that's where the pendulum will settle...

I'm a little disappointed that some on council have gotten into their little camps right away and reverted back to the old left-right dynamic, which I don't think is very productive. So Don Cherry certainly stoked those fires with that kind of speech.

What do you think will be the most contentious issue facing City Council in the near future?

It will be about how to handle the 2012 budget. There was a surplus last year that allowed for a property tax freeze and yet we still have a sizeable budget and debt. So there will be different strategies put forward about how to deal with that. And I think if an effort to cover that debt is based on significant service cuts, that's where I think will be the most divisive debate...

Besides our perception of ourselves? I think transportation is a huge one...We need a more complete forward-looking transportation approach, and we can't keep stalling and waiting. I don't know how certain things in Toronto even got built. We must have had a different civic personality. You think about the Bloor Viaduct and some of the subways we built...because now you can't even get anything built. When you look at what we've built over the last two decades, from an infrastructure perspective, there's not a lot to point to.

So what I'd like to change most is our approach to getting transportation solutions implemented. In a way, we've got to just stop talking about it, stop studying it, and just do it.

What did you mean by "our perception of ourselves?"

I'm sick of everyone talking about "oh in New York they do this" or "in London they do that." I mean come on, get over it. This is an amazing city, and, if you want to have that futile apples to oranges conversation, we can't compare with anywhere in the world in terms of what we have to offer on every checklist you might want to look at.

Just look at the last election we went through...We spent so much time talking about what's wrong with the city and so little time talking about all its great attributes. The more you do that, the more you reinforce that [negative perception]. So why would anyone come to visit Toronto if all we do is bitch about it?