As one of the top tourist attractions in Toronto, anyone who's toured the Steam Whistle Brewery is well aware of its beginnings. After working together at Upper Canada Brewing Company in the late 1980s and 1990s, Greg Taylor, Cam Heaps and Greg Cromwell dreamed up the idea to start their own brewery in spring 1998. Their goal was to make a pilsner that would compete with the best in the world, and they were motivated to make it happen.

Steam Whistle Brewing opened in March 2000, and has since drawn honours for both its brew and its management. Its home, the historic John St. Roundhouse, hosts indie music showcases and monthly art shows to showcase local talent, among other arts, culture and charity events. And as Taylor explains, it's this interest in the local community and culture that has helped Steam Whistle Brewing grow over the past ten years.

Why do you think Steam Whistle has been successful in establishing itself in Toronto?

We take our involvement in the community quite seriously. We see ourselves as a small business in the city and we're an underdog and therefore supporting and getting involved with other organizations that we see as underdogs and the arts community is important to us. It's what drives culture in the city but a lot of those folks - artists and
musicians - don't really have the support that they ideally should get.

Right from the start we designed our gallery, which allows artists every month to show their work at no cost and we support a party for them. And we're very involved in the music scene and we support a lot of gallery functions offsite as well. We have 210 events here at the brewery in our events space and 45 per cent of those events are charity functions.

So I think people are always looking when it comes to consumer products for somebody that they can care about that maybe cares about them and cares about the city, and someone who's authentic. So visiting the brewery is probably one of the biggest drivers of our sales because word of mouth drives demand for product. And the more we're involved in the community, the more we bring the community down to the Roundhouse, the more people learn about us, and then speak to friends about us. 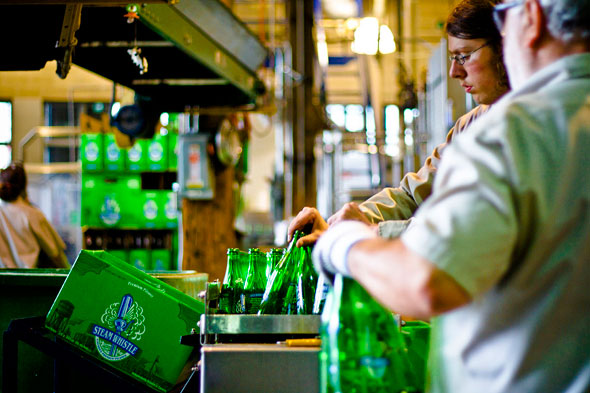 Was that involvement in the community always part of the plan in creating Steam Whistle?

Our product is a social product and the idea of being involved in the community comes from the traditions in Europe where every community had a brewery. If you go to Germany there's still breweries in almost every town. And we liked that idea that we'd be a gathering place, a social focus, and we just like the idea that the social community expands from that. There's a lot of social leaders in the arts community...and we want to do whatever we can to introduce musicians and talent from our community to people who might not otherwise have an opportunity to see it.

How do you get involved in other cities where Steam Whistle is available?

We've expanded outside Toronto and the value we've used to run our business here we just expand out wherever we go. For example we moved out to Calgary and we moved into Vancouver. Typically what we do, we send one of our own people that really understands our culture and philosophy and we send those folks out to expand. So it doesn't just have to be Toronto, even if we're in a smaller town we'd like to be involved in supporting arts and culture.

To what degree do you focus on what your competition is doing?

Typically, we don't . . . We focus on only one product. We see ourselves structured in a similar way that the great European beers are. We don't diffuse our focus. We understand that we're here to make the best pilsner available in Canada and that's our long term vision. We want to be the most respected premium beer in Canada, and that might take 20 years. But we're working toward that goal.

There's a lot of great craft breweries in Ontario and in Canada. So for us we have customers all the time asking us can you make a dark ale or can you make a light beer. Our suggestion is there's lots of them available, lots of great microbreweries making fantastic products. So if you want to get those you can, those are available. We don't see any reason for us to focus on that because we want to become better at what
we do.

How has your historic site at the John St. Roundhouse help set yourself apart as a company?

For Cam and I it was really fortuitous. We had a lot of our marketing ideas planned out, we had our business plan and our equipment and everything, but we still hadn't found our home. We had exhausted the support of commercial realtors, and our gut feeling was we didn't have our place yet. So I said to Cam, let's go for a drive, and just you and
I, we'll find something. And I had had a discussion with a friend of mine about the restoration of the Roundhouse and we had an argument about whether the windows were plastic mullions or wood. So we drove there, I parked out front on Bremner, checked out the windows, looked inside and said, "This is the cathedral of beer."

So we got talking and discovered there was potential opportunity to use the Roundhouse. The council wanted the community to find out about the history of the Roundhouse and that fit perfectly with [what we're doing now] because we give daily tours 7 days week, 363 days a year. So for our use we had to get council approval, so we made a proposal, council approved the use and we opened Steam Whistle in March of 2000. So there's no question that it's had a major influence on the success of our product, on people's knowledge and understanding of Steam Whistle. It's really founded here at the Roundhouse. So thank god we drove by that day.

What can you tell me about the current renovations to the Roundhouse?

We see over 80,000 people here a year and the city has just finished a wonderful renovation of Roundhouse Park that's going to have a live steam engine, a mini ride out there for kids. A lot of the engines are going to be out there. And it's going to be a wonderful opportunity for the city to discover rail history in Toronto. And the redevelopment of the park is just going to bring more people down here. So we're
responding to that with expansion of our tour system and our event space to accommodate more people because last summer we had lineups pretty much every Saturday. So we're just trying to do our best to make sure everyone has a great experience when they come down here.

What do you like about Toronto and the area where you live?

The great thing about Toronto is that you have all these areas that are communities in their own right. Bloor West Village, where I live, is a community more from the geography perspective. It's right along the Humber River. It has a nice beautiful park system along the river there. There's great restaurants on both sides of the river. It's very accessible to downtown. It's a really nice community where we are, it's a beautiful area. It's nice getting away from the downtown core but you really haven't left the city. The subway's right there. For us going out for dinner downtown is just simple in 15, 20 minutes. We have kids so our area is a great community, the kids can walk to school. But we're still in touch with the core of the city.

In terms of the hospitality industry in particular, opportunities for craft breweries are considerable in Toronto because of the diversity. I think it's one of the most diverse cities in the world and as a result the restaurants, the choices are incredible.

What are some of your favourite restaurants or bars in Toronto?

We love Chinese food. We like Lee Garden and Pho Hung, which is Vietnamese. I love Lee on King Street.

In terms of bars, Betty's is a great bar. I'm a big fan of Rodney's by the Bay. There are some great oyster houses in town. Oyster Boy is another one I really enjoy, and they have an affiliation with Swan Restaurant on Queen as well.

In my neighbourhood, Bryden's in Bloor West Village is my local bar. When I have time I grab a pint of Steam Whistle and enjoy that place. It's close to my house. So it's great because you've got a combination in the city of local bars and local communities and then you've got the downtown core which is just fabulous restaurants and bars and entertainment. 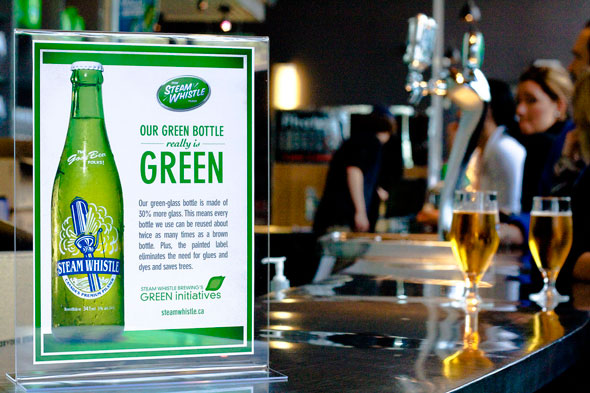 What would you change or improve about the city?

It's unfortunate there's such a battle between pedestrians, cyclists and motorists and I think it's going to be difficult to balance that out. The city's taken some great steps at trying to improve it.

I'm sort of wondering what will happen as the automobile becomes greener. As cars become a greener choice, and I think in the next ten years you'll see them become a greener choice, they may at some point give no harmful exhaust that would affect the environment. At that point, what's going to slow down the expansion of the car? Once it's no longer an environmental issue, everyone will want one. So I'm kind of concerned with the long-term transportation in the city's core that could become very challenging. But I think Toronto's doing a great job of taking environmental initiatives over the past ten years and has really provided us an opportunity for leadership.