Toronto Through the Eyes of Cabral "Cabbie" Richards

For those familiar with the interview stylings of Cabral "Cabbie" Richards from The Score, you can imagine what it's like to interview him. The TV personality who rose from an internship to become "Cabbie on the Street," the hyper-hugger interviewer of many NBA and NHL stars, is as energetic and off-the-cuff in person as he is in his television segments.

After rapid-fire apologies for a Score taping that ran late and a quick check of my handwriting, Richards finally settled into talking about the select downtown zone he spends his time in, and what he'd do as a hypothetical Toronto tour guide for his frequent interview subject, Kobe Bryant.

What are your favourite parts of the city?

I like the downtown core -- my little zone is Lakeshore to Bloor and Dufferin to Yonge. I don't like the suburbs. The only time I get out of my zone is when I'm off to the airport or to my boy's place at Yonge and Finch, where we have dude nights watching Taser videos on YouTube or anything involving the word "fail" -- like "driver fail" or "stripper fail." Yep, that's it... I'm a loser.

What's your relationship like with the city as a TV personality?

Because my show was originally called Cabbie on the Street, when I started, I was all over the city. I would just go and bombard random people in any neighbourhood. We would go to Yonge and Eglinton; we'd go to the Danforth or Bloor West, basically anywhere.

Now when I travel, I definitely rep Toronto. I don't do as much stuff out on the street anymore, but I'm always repping. I'm still Cabbie on the Street.

Are you surprised by how far you've come at the Score, starting as an intern and now interviewing people like Kobe Bryant?

Yeah, it's pretty shocking... especially for someone who doesn't have that much talent. All I do is talk. It's been a pretty cool process.

You know how they say you're supposed to enjoy the ride? I actually just get caught up in what I have to do next. What's my next interview? I'm always asking that question. I don't really spend that much time smelling the roses, because then you just get to thinking about the cool stuff you've done, and I think that's a little weird... like "I did this and I did that." I'm just want to know what time is lunch?

What's been your favourite interview so far?

Probably the number of Kobe Bryant interviews I've done, but I interviewed Michael Jordan this year, and that was a landmark for me. Jordan was a childhood idol of mine, and getting to interview him and make him laugh was great. I even hugged him.

How many times have you interviewed Kobe?

I've interviewed Kobe 12 to 14 times. The last time I interviewed him was at the NBA Finals, and I got a one-on-one with him, which was very difficult... but I got it. Before that one, we were in a limo. But look out for the next one... it's so cool. We're going to air it around the end of the NBA All-Star Game, so February-ish. 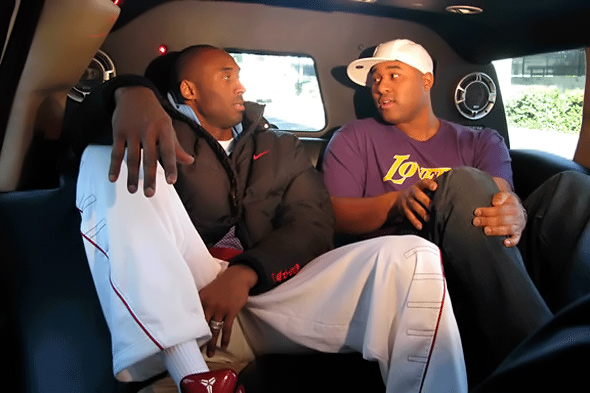 If you were Kobe's tour guide for one day in Toronto, where would you take him?

I'd probably take him to the CN Tower because I doubt he's ever been up there, and it's one of the defining structures of our country, even though it's really touristy.

I'd bring him here to the Score. We'd go check out Body Worlds at the Science Centre if it was still on. There'd be a fat guy, and I'd be like, "Kobe, this guy's like me! And this dude's like you!"

I'd take him to my sushi joint, Asuka in Yorkville, and we'd go to look for kicks too. We'd go to Good Life Goodfoot or Stolen Riches.

Our other meal would be at a Thai food place. We could go to Golden Thai on Church Street or a place around the corner from me on Queen Street called Sweet Lulu -- it's a tiny place, but the food's so good.

As for nighttime, it would depend on what day of the week it was. Say he comes on a Saturday, then we'd be going to Jezebel. That's where we'd party. When I go out it's always a tour of spots, so I'll hit Pravda or Foundation Room and then end it at Jezebel. So we'd do some variation of that.

We would finish by eating Chinese food at The Garden, which is at University and Dundas. That's late night, after 3:00 a.m.

Who would you like to meet that you haven't met yet?

There's the holy trinity: MJ [Michael Jordan], Tiger Woods and David Beckham, so [having knocked Jordan off the list], that leaves Tiger and Beckham. And above those three, I'd also like to meet Obama and Oprah... O squared. Those two are above the holy trinity.

If you could ask Tiger Woods one question right now, what would it be?

I wouldn't ask him the obvious one, like "Why are you so dumb?"

You know the thing about Tiger is that nobody really knows that much about the dude. We know some of his dirt now, but before that, he was just an awesome golfer, a global brand... the end.

Maybe I would ask him, "Tiger, can you tell us about you please?" or "What are you going to do now? What's the plan?" I'd probably ask him about himself.

Are there any athletes that see you and turn around?

Yeah. LeBron James is one. There's a certain reaction sometimes when I walk in a locker room or dressing room that's like "aw man, here he comes." Whenever I see [Alexander] Ovechkin, he's like "What are you doing here?" Ovechkin doesn't actually run, but I get that "aw man" reaction. LeBron runs. 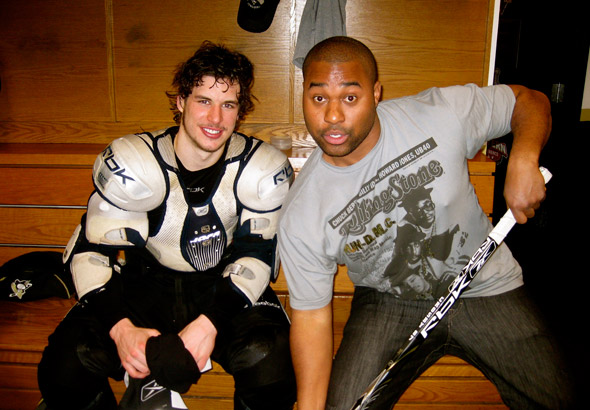 It would be awesome to get Jack Nicholson because no one ever talks to him. There's this rule at the Staples Centre that nobody can talk to Jack.

I'd like to interview George Clooney and Brad Pitt, who I call the kings of the Earth. Those dudes are just like Oceans 11 in real life. As cool as that movie is... that's also them in real life.

You know what'd be really strange? It'd be cool for people to see me interview J. K. Rowling. She's a billionaire, and has made reading cool for kids with the Harry Potter series. She's from England, and is probably a huge soccer fan. I like to do things that people wouldn't expect me to do... like ice skating and bobsledding.

Photo of Sidney Crosby from Cabbie on the Street's Flickr stream.