Toronto Through the Eyes of Freshii Founder Matthew Corrin

Matthew Corrin is a risk taker. He may not seem like one during our recent lunch over a bowl of salad at Freshii, his highly successful (and healthy) quick service restaurant chain, but how else to explain someone who takes a well known and established business called Lettuce Eatery and changes its name overnight?

The move was bold, if not highly controversial. The official impetus for the name change starts with the chain's expansion to Chicago in 2008. Corrin wanted to evolve the menu to include other popular (and higher margin) offerings like rice bowls, breakfast and burritos. But with a name like Lettuce Eatery customers would always think of salad first. So he changed the name for the US market where he expects to have hundreds of franchises within the decade.

But therein lied the problem. Once the new name was in place in the US, it was highly inefficient to have a separate brand (but same product offerings) in Toronto so he decided to change the name here too, keeping his fingers crossed that the chain's throngs of loyal customers wouldn't mind. So far, it doesn't seem to have backfired.

Except there was the Fresh controversy. Back in April, Torontoist chatted up Fresh founder Ruth Tal Brown who told them she wasn't too pleased that she now found a competing restaurant across the street from hers at Richmond and Spadina with similar offerings and, suddenly, almost the exact same name.

Corrin took the defensive, claiming that it was all just a coincidence and that he didn't even realize that Brown's mini vegetarian empire wasn't still called Juice for Life.

Was his explanation believable? After speaking with the Freshii founder in-person, via phone and over Skype I can say that I'm almost certain that Fresh was totally off his radar. The reality is that Corrin doesn't know Toronto that well. He grew up in Winnipeg, has worked and lived in Manhattan and Chicago and had never heard of a number of restaurants I named during one of our conversations. What does he think of the custom salad offerings at Urban Herbivore? Never heard of it. What about the burritos at Chino Locos? He doesn't know that place either.

You see, Corrin isn't focused on the competition. He spends his time worrying about things that are within his control like how to find affordable eco-friendly packaging for his restaurants; or how to best train and motivate his employees.

It's probably why he's been so successful, obsessed with improving and growing the Freshii business; and when asked, taking the time to chat with the New York Times, the Globe and Mail and me.

You're originally from Winnipeg. What was your first impression of the city when you moved here?

I moved to Toronto for the first time from NYC to start Freshii (Lettuce Eatery at the time). So, it seemed like a small city compared to New York - kind of like a mini NYC. Then i moved from Toronto to Chicago and spent two years in Chicago....Now I'm back in Toronto and realize that it really does have the best elements of NYC and the best of Chicago mixed into one....but when they come together it makes Toronto better than both.

In what neighbourhood do you currently live?

What are some of your favourite local haunts?

There are three dog parks and two playgrounds within a five minute walk from my house. The Beltline is where I spend at least one hour a day running. Cava is a great restaurant. I eat at Freshii approximately two times per day. Basically I live on top of it....

Describe how you would spend an ideal weekend afternoon in the city?

My daughter doesn't understand the concept of a weekend....She wakes up around 5.30am. so starting from there....quad espresso over ice at Starbucks. Walk with my wife to the dog park, hit the playground for Annie, go for a run, do some work, tour some of my restaurants to check in, stop in at Harry Rosen (my favorite retailer in the city). I'd then put Annie to bed and head out for dinner with my wife. Sushi probably, ideally with friends - which is a great time to catch up. I travel a lot during the week so weekends is my time with family and friends.

Who are some local restauranteurs that you admire?

I wouldn't call myself a foodie...but things that get me excited are superior brands, great buzz/vibe, awesome service; and that all equals usually jam-packed restaurants. Some examples are Terroni, Brassaii (where I got married) and any of Mark McEwan's places. I'm really impressed with his business savvy for picking amazing locations and driving great buzz and great people to his restaurants and grocery stores.

Who else in the city makes a good salad, wrap or rice bowl?

i don't eat salad/wrap/rice from anywhere without a 'ii' at the end.

You're all about fresh ingredients. When you shop for home, where do you like to buy your meats and vegetables?

You wouldn't believe if you saw our fridge....It's basically empty. We takeout from Freshii four night a week. One night we get some sushi and another we have pizza. The other night is a date night when my in-laws have a sleepover with our 18 month old.

Where do you like to eat sushi and pizza?

Pizza Pizza. I like the thin wholewheat crust. Also, Terroni, Sushi Inn, Takara Sushi at Yonge and Delisle Avenue. A side note: I always bring Freshii bags to save the nickel. It always makes me smirk when i carry my sushi or pizza in a Freshii bag....

What made Toronto a good city to start a restaurant chain like Freshii?

The city is cosmopolitan, mass affluent and has high density intersections. Our restaurants introduced a new way of serving quick service food that had really never been done before we opened in Toronto. 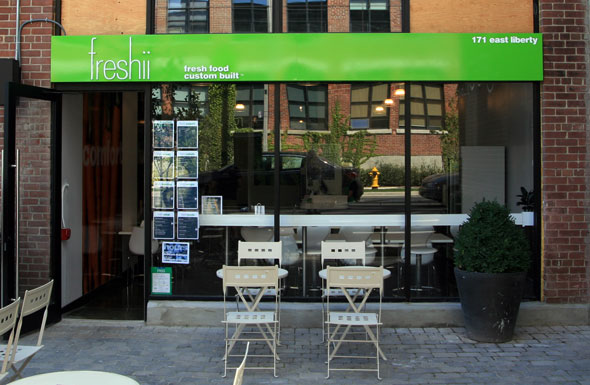 By my count Freshii is up to 13 locations including the new one in Liberty Village. How many locations do you think Toronto will have three years from now?

We have legal commitments (ie: signed franchise documents) to open another nine over the next three years.

You don't have any locations east of Church. Why no love for the east side?

We need to find the right pockets with enough business traffic to support them. Any ideas? I used to live east of Church! Lot's of love....

There aren't a lot of high density areas on the east side....maybe the Danforth across from the Big Carrot....maybe the Beaches.

I drove along the Danforth three times last weekend to and from a friend's wedding....I was thinking that strip as well - near Big Carrot. Exactly.