This might be Toronto's most enduring dance party ever

There is only one party in the city of Toronto that no matter what month you attend, no matter what hour you get there, and no matter what type of music you're loving at the moment, you'll love the song that's playing when you walk in the room.

That party is Chronologic and yup, they literally play songs from every musical era starting from 1890 to whatever was released this afternoon.

Toronto's Matt Cully and Louis Calabro, also known as the Goin' Steady DJs, are the masterminds behind the time travelling dance bash and their baby turns nine this year.

"For the first 20 minutes or so we play classical music," Cully says. "We play Mahler, Beethoven, Wagner, Mozart, Bach ... the big numbers and often times it's stuff from movies that people know. When some people come early they'll dance to "Swan Lake" 'cause it's a waltz. But we very quickly move into blues and jazz and big band swing music, then by 10:45 we're into the '50s and '60s."

Cully and Calabro, best buds having met after moving into a self-described "hell hole" of an apartment while attending U of T, have become experts and keeping people moving consistently for four hours once a month, but that's because they've been curating dancefloor soundtracks for a hell of a long time. 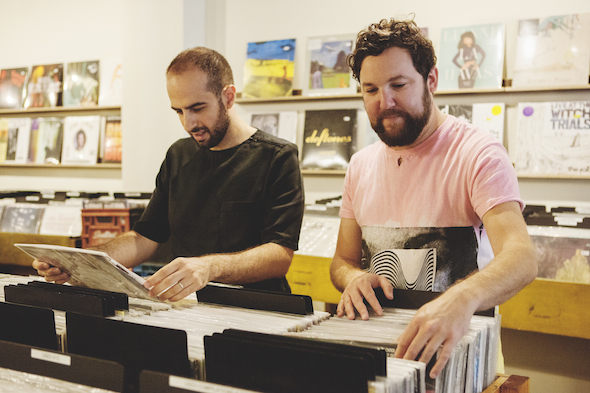 "Our first party in 2005 at The Boat was called Goin' Steady and it was music from the '50 and '60s old rock and roll, Motown, weird stuff from around the world," Cully recounts. "It was a theme night pretty much and was heavily curated and we were more like selectors of rare records from that period but also fun stuff that people like to dance to."

This is how the two became the Going' Steady DJs, a term they lifted from old magazine ads they used to cut out to make party flyers.

"At the end of the day, any party is really about guys and girls, or guys and guys or girls and girls or whoever getting together and getting loose," Cully says. "There's a real romantic element to it. So Goin' Steady seemed to fit at the time, it was raunchier than the 1950's for sure, but still under the pretence of this good, wholesome sock hop kind of thing."

That party eventually moved to the Gladstone and lasted nearly 10 years before Cully, a musician in his own right playing with Bruce Peninsula and himself as Eons, and Calabro decided to switch things up.

"We just really wanted to play music from different periods," he says. "After playing stuff from just [the 50's and 60's], it was just like, man, I really wish I could play that new Beyonce song because it's killer.

"So basically we thought, how can we apply this curatorial spirit to every decade? That's where we got the idea to go through every decade and by the time everyone is wasted at 1:30 we're into modern stuff that everyone knows. When you're doing a four hour DJ set it coincides with the perfect ramp up of a party.

"In a vague way it's like how we're all moving through time together, and so by the time you get to your favourite era, whatever it is, you're super excited to hear this decade of music."

Now in its ninth year at The Garrison, the party continues to attract different crowds and keeps that musical momentum building to the end of the night.

It's like eating the most delicious dinner, but all the while quietly being so excited for the even yummier dessert. Strike that, it's more like an all-night dessert buffet! The greatest hits of all time, from all time.

So how does it still work after nearly 10 years of decade hopping? Not to boil a party down to a science but, it's consistency.

"Many people would see our party as an institution that is dependable to have a good night," Cully the crate digger says. "We're a populist party. We don't see ourselves as artists necessarily, in the sense that you want to go see me perform my set.

"It's more, this is a night you're going to go to and dance your ass off every time and is inclusive, which has been important for us, forever. To be inclusive and to appeal to the widest range of people who love this kind of music."

Mutating out of Toronto's early 2000's indie rock scene, having thrown parties in Chinese restaurant and in the back of pizza places means they can appreciate the evolution of their institution, and they have no plans to lift the needle anytime soon.

"Right now we have people coming who are 19 and 25," Cully says. "Whereas the people who were coming in the beginning probably have kids now, it just keeps turning over and becoming a new thing for more people."