Toronto music festivals could learn a thing or two from Montreal's iconic, three-day-long, 110-band fest, Osheaga. Don't get me wrong, we've got a lot of variety when it comes to festivals, and this past week we hit it big with Veld, Grove and a glittery appearance from OVO. But I go to Osheaga almost every year, and the lineup, not to mention the festival as a whole, just keeps getting better and better.

This year, it sold out in advance with overwhelming crowds, totalling about 40,000 each day. Sunday's crowds for Kendrick Lamar and Mumford & Sons were some of the biggest I've seen at any festival, and the energy was pretty beautiful the entire time.

Here are a few pointers that could help those organizing music festivals in Toronto:

The location
While festivals in Toronto over the past week have been contained to one area, some of the city's more well-known musical gatherings, like NXNE and CMW, require gallivanting around North America's fourth largest city on a series of clattering tin cans, thereby missing half the shows due to massive lineups outside of bars (ever tried to get into the Horseshoe during NXNE, even with a pass? This is the scene I refer to). Osheaga is held in one location, Parc Jean Drapeau. It keeps the festival energy in and prevents the incidence of goose chasing around town only to wait in the aforementioned horrendous lines. It's possible to do this, too â Arts & Crafts Field Trip made it work by using Fort York and Garrison Common as a venue.

Always on time
At Osheaga, there are six stages, and while you might expect the management of so many artists to make for a total clusterfuck, it all goes smoothly, like especially well-lubricated rap lyrics. Kendrick Lemar, for example, started right at 7 p.m., within what seemed like 30 seconds or so after the Lumineers. And on Friday, Alt-J, Two Door Cinema Club, Ellie Goulding, Vampire Weekend and Phoenix alternated between the Scene de la Riviere and Scene de la Montagne stages, which are side-by-side, in such quick succession we could hardly keep up. Organizers are doing their job here, and doing it well. 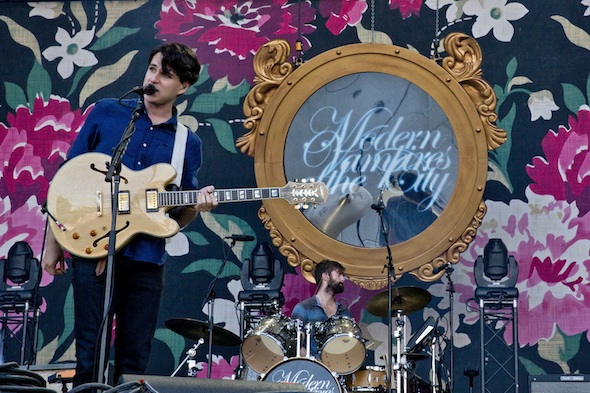 The Lineup
I'm most inclined to compare Osheaga with NXNE, mainly because of their size, and the variety offered in both lineups (though their duration is an obvious difference). Neither caters to a niche crowd, like Edgefest or Veld. Now, while I love Toronto dearly and I'm proud of its many glorious festivals, I feel like Osheaga's lineup this year kicked the asses of a few of Toronto's, combined. North By, for example, didn't feature many bands I was stoked on. Wintersleep, Joey Badass, The National, and Ludacris were standouts, as well as Fucked Up. But Osheaga this year featured a long list of bands people actually care about right now on each day of the festival. Alt-J, Vampire Weekend, Kendrick, Father John Misty, Mumford & Sons, and Phoenix are just a few examples. While Saturday's lineup wasn't as stellar as the other two days (with the exception of Beck), Osheaga still has NXNE beat. Badly.

The beer, it is cheap
At Field Trip, beers were $8 or something, which is pretty standard for a festival and not much to complain about. In Montreal, though, where everything is cheaper, beers were $6.25. There are also people carrying around massive flats of beer and selling them amongst the crowd, so you don't have to wait in heinous lines. Can't argue with dat.

Pick your poison, tell me what you're doin
Crews of spirit animals watch over the scene at Osheaga. Festival organizers know that some festival-goers will indulge in party drugs. As a result, a dude I know got paid to check up on festival-goers who were poppin a little bit too much, telling them maybe they shouldn't do drugs, and letting them know he was there and sober and could help them out if need be. He was passing out water, too. It doesn't mean drug use was condoned, only that organizers were aware of what's probably going on. In the same vein, there are lots of water stations to help said partiers (and everyone else) stay hydrated. 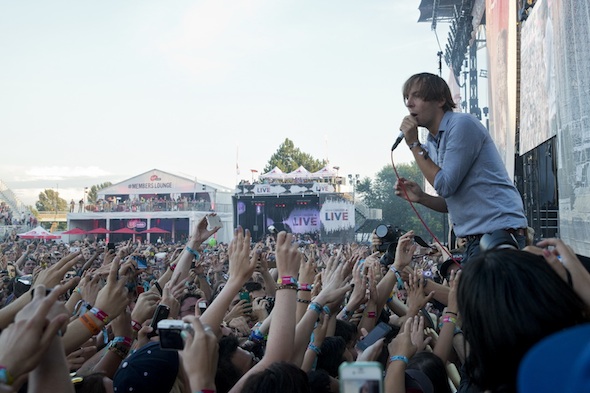 Lots of chill space
Osheaga caters to not just the rambunctious, but also the weary, the tired, the partied out. There is a vast area of grassland that's fully populated each day, as well as a huge stretch of turf that people can chill on, and then the main dance areas in front of the stages. The grasslands make an entire weekend of festival life doable, because you can relax during non-primetimes and rest up for your own personal highlights. The greenspace makes the festival sensible for families, too; I saw lots of wee humans in noise-canceling headphones.

The downside to Osheaga
The only downer to Osheaga is the flood of people trying to get out of Parc Jean Drapeau and onto the Metro. We left half an hour early on Friday to get back to the city ahead of the rush, only to have to wait for half an hour amongst hoards of antsy, angsty bros. Floods of humans are always a hazard when it comes to festivals in any city, but these floods...they killed my vibe.

How do you feel about Toronto festivals vs. festivals in other cities? Do you think we stack up, or that we're better or worse?