No sound can hide from U.S. Girls

Meg Remy has been releasing music as U.S. Girls since 2008, and fans have watched her noisey, contemporary soul sound grow with each new release. The last three years have each seen powerful albums surpassing earlier efforts by leaps and bounds: from 2010's Go Grey to 2011's U.S. Girls on Kraak, to 2012's GEM, on FatCat Records, which will see its official release this Thursday in Toronto.

On GEM, vocal tracks are still compressed and echoing, but they're no longer buried under noise and the effects of lo-fi recording. It's clear that Remy is more confident in her unique voice, and in the stories she has to tell as a song writer: the artist's varied interests and influences include contemporary photography, sex work, and soul music. As U.S. Girls' cover songs are favourites for their tendency to break down the unseen meanings of the originals, fans will be glad to find 2011's take on "The Boy is Mine" is followed up by covers "Jack", a head banging number about a serial killer, and the politically charged "Down in the Boondocks."

New-found fidelity aside, GEM is in no way a clean pop record. On "Curves", sampled voices speak over rapid drum loops and swirls of noise. "Rosemary" is a chilling dirge, Remy crooning sweet yet full of menace as only she can over a slow, mechanical beat and disharmonic, ominous keys. Yet it's the cleaner and more complex "North on 45", as Remy herself states below, that shows just how far U.S. Girls has come as a sound project and as an emotive power.

Though Remy still carries an American passport, she's been living in Toronto for the past two years with her partner and artistic collaborator Max Turnbull of Slim Twig, who both produced GEM and appears as co-song writer and musician on several tracks. We spoke briefly to U.S. Girls about life in Ontario, GEM, collaborating with other artists, and her upcoming double album release show with Slim Twig. 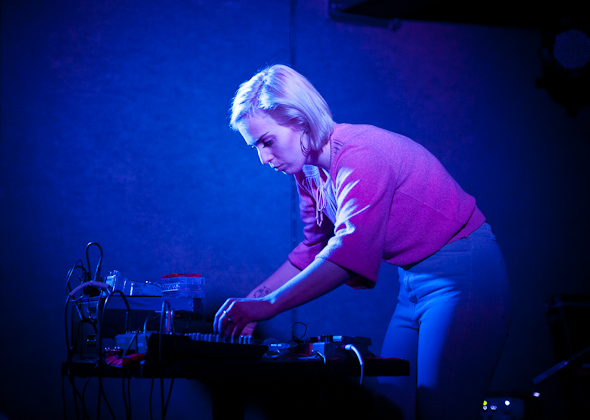 How long have you been living in Toronto, and how does it compare for you to other cities you've lived in and played live in?

Meg Remy [MR]: I have been staying in Toronto a lot for the past two years. I do not officially live here yet but am in the process of obtaining my residency. I enjoy it more than anywhere else I have lived mostly because of the people I have collected here...not to mention the fact that the city is so clean, the street car runs all night, and all the good thrift stores and used record joints. I love Toronto.

GEM's one-sheet talks about your working in seclusion prior to collaborating with Max, which I'm sure is still a priority. Living in Toronto, how do you find peace to write and work on music?

MR: I mostly work on music with others now. Rarely do I go into the studio alone anymore. But I do find time, almost daily, to sit at my desk alone and work on collages. This is a nice time of isolation where I can let my mind and hands wander... and I often think about music while making visual pieces.

I can definitely make out more lyrics on GEM than on earlier records. Can you name a particular song on the album that means a lot to you lyrically, and talk about where the song came from?

MR: "North on 45" is a song that means a lot to me. Slim Twig wrote the music and I wrote the vocal melody and lyrics. This song is a pure symbol of our collaborative powers. The lyrics speak of my childhood in the most clear terms I have ever used and its a big step for me.

How has working with a producer and other musicians changed how you think about your sound?

MR: The sky is the limit for me now. No sound can hide from me. I have all of these talented people surrounding me who understand my ideas and help me convey them. My sound confidence has grown.

Will the Toronto show on the 13th see you play solo, or with a backing band?

You spent a lot of time this year touring both in North America and abroad: what was the most memorable live show?

MR: The most memorable live show would probably be the Ottawa Bluesfest where I played on a stage with an audience capacity for 30,000 and only about 20 people were there. It was surreal and exciting and I was all over that jumbo-tron.

You can find GEM at FatCat Records, good Toronto record joints, or at the upcoming album release: U.S. Girls performs live December 13th at the Silver Dollar along with Slim Twig, Young Mother and Fiver.