Regina Spektor is far from perfect. But she's perfect enough for her fans.

Spektor stopped a song for a do-over on two separate occasions during her Thursday night concert at the Sony Centre for the Performing Arts, admitting she screwed up. Then she gave a sheepish grin and started again as the crowd cheered her on. 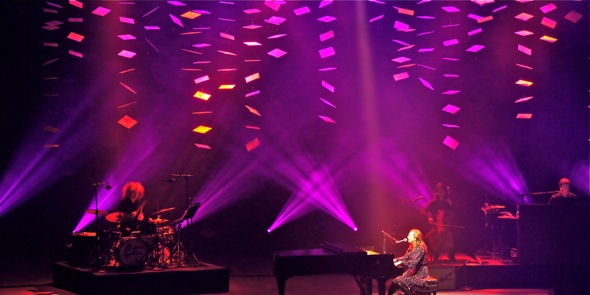 The show was much more of a concert performance than the last time I saw Regina Spektor in Toronto. The audience was a lot more mature this time. Maybe they've grown up a little. After all, it's been three years since her Sound Academy show. Or maybe it was the classy venue that helped dictate the decorum.

The stage set design was minimal. All black with short risers for the drummer, cellist and keyboards behind regina's baby grand piano that stood front and centre. White reflective specs of material emulating sheets of paper fluttering above the stage made for a simple but effective use of all the vertical space on the expansive stage.

It was nice to hear a more bare-bones approach to the instrumentation in Spektor's live show. The use of cello in particular helped a lot of the songs and, together with a deft touch of the drum kit, provided a rather laid-back rhythm section (no bass or electric guitar at all on stage here).

I found a few of the songs from her latest album, What we Saw from the Cheap Seats a little over-produced. It was refreshing to hear Don't Leave Me (Ne Me Quitte Pas) performed without the flourish of horns thrown in the mix. If you haven't heard her original version, it appears on her 2002 album, Songs. 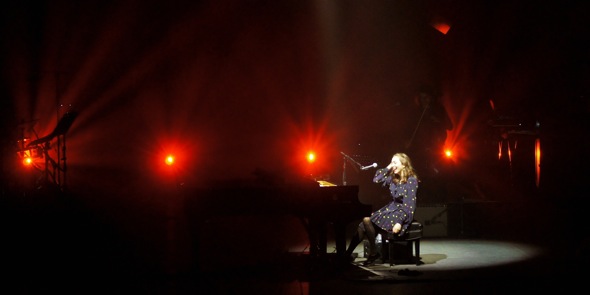 Spektor remained at the piano most of the night, taking sips of water after each song and only occasionally standing up with a microphone to sing, facing the audience for a song or two.

One of the highlights was when she did a duet, "Call Them Brothers," with opener Jack Dishel (a.k.a. Only Son), whom I just found out is married to Regina Spektor. 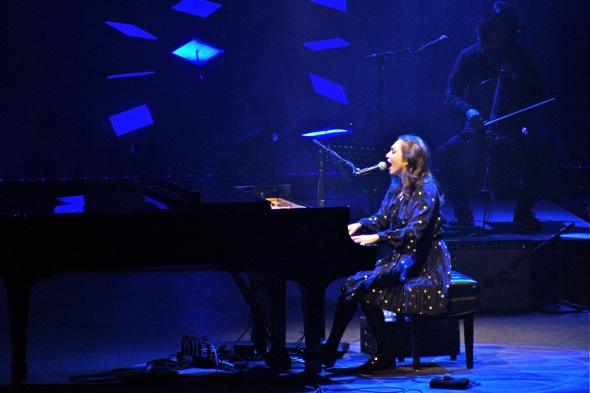 The simplicity of the evening's arrangements was perhaps most felt during All the Rowboats, which featured Spektor's opening beatbox in unison with the drummer. And Spektor really shone when she performed "The Prayer of Francois Villon (Molitva)," by Bulat Okudzhava, the late Russian poet/writer/musician/novelist -- sung in her native Russian, her voice as captivating as ever.

Despite a few false starts, it was a pleasure and a treat to see and hear Regina Spektor perform in a more traditional theatre setting.