The warmer weather is encouraging all of us to take it to the streets, and it's no exception for Toronto's buskers. Instead of hunting underground for my usual TTC busker profile, I decided to crawl out of the tunnels into the lively Yonge and Dundas intersection, where I promptly met talented street drummer Peter Richards.

Now, we all know what they say about drummers, but I've always admired them. It must be their unique ability to split their limbs and minds into four separate parts. Or that faraway look they get as they slide into human metronome mode.

I will say this with conviction -- Peter must be one of the nicest, most badass people I've ever met... and he's a brilliant musician. Can anyone tell a story with the drums like this guy can? Watch this week's video and see for yourself.

Tell me a bit about yourself. Who is Peter Richards?

Well, I grew up on a boat, and went across the ocean as a kid. I lived in England on my own for five years, and that's where I encountered and pursued my interests in sound, electronics, music, and computers. I also lived in Spain for a while. I was lots of things before I became a street performer.

I lived in Toronto all through the 80s, but I kind of just relocated back to town. I'd moved out west as a computer programmer. Now I'm busking at Yonge and Dundas. 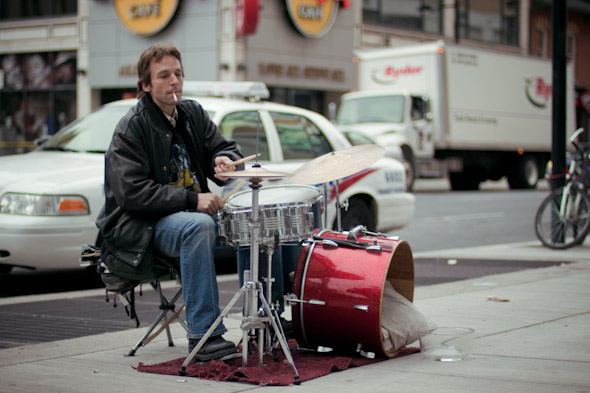 How long have you been drumming? How did you get into it?

I've been drumming for about 25 years. I got into it just from listening to music in the family, I guess. My mom played the piano. Also, I was a soundman. I used to do sound for bands at clubs, and recorded for them. I sought out any drummers that I knew I wanted to be like, talked to them, and hung out with them. That was actually before drumming, from about age 10. I was just very interested in electronics and sound.

What genre of drumming do you do?

Whatever I can. Mostly jazz and blues. My biggest influences probably were the people I played with in my 20s.

How did you get into street busking? How long have you been at it?

I'd always played drums as a hobby, and I was in a band. Then my job out west sort of fell through, and I didn't want to work with computers anymore. At that time I wanted to do music. I started busking with a horn player, and the two of us just went out to do that, all the time. I've been at it since 1992.

When I met you, you mentioned that there are a bunch of Yonge-Dundas street drummers. How do you guys take turns? Is there a schedule?

It's pretty flexible because everyone knows everyone. It's give and take. There are different spots, too. You can go down the street if there are too many people there at once, or someone will just ask if they can play next. It's pretty easygoing. 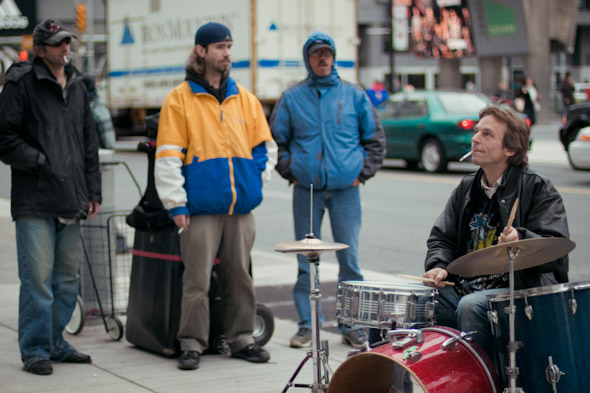 What are you allowed and not allowed to do as a street busker?

First, you have to get a street entertainer's permit from the city. From what I know, most street buskers have one.

There are a bunch of minor rules, like one having to do with sidewalk width obstruction and not playing on street corners. No amplifiers, either. That's not always fair, because it limits a lot of things. You can play a trumpet or a set of drums, but you can't play your electric guitar. That means only acoustic guitar, and acoustic guitar just doesn't work in loud outdoor spaces. So you'll only find the acoustic guitar in places that are more secluded, like in Kensington Market, where it's a little more quiet.

Where else can you find street buskers in Toronto?

Other drummers at the intersection would know better, but down by the ferries, apparently.

Street busking is my full-time job. When I'm not busking, I get work playing gigs. I play at Mitzi's Sister once a month or so.

What's the best part about street busking? The worst?

The best part is probably the toddlers. You see them coming down the street and they haven't even seen the drums yet, but they're already bouncing. They don't even realize they're doing it, or why. They just are.

The worst part about street busking is probably the retirement plan.

A common complaint I get from TTC buskers is how people sometimes see them in the same light as panhandlers. This is probably an even bigger problem for street buskers like you. How do you feel about that assumption?

If my relationship with people out there is good, then I don't feel like people think less of me. But if one person comes along who's not in that mode, it doesn't wreck my day or faze me. I don't look down on the panners who are at Yonge and Dundas. It's all one big soup going on down there. Everyone has to give respect to everyone else if they want to be around, and that's why a place like that works. 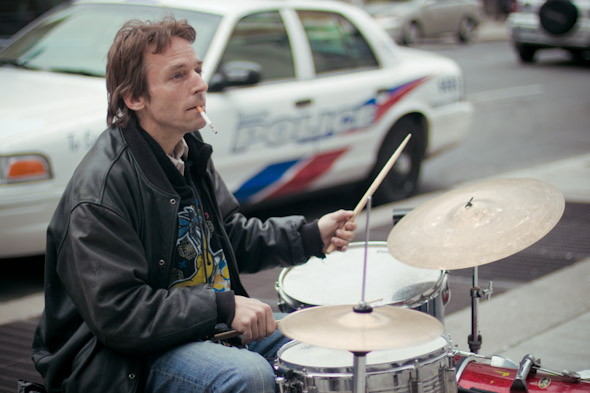 Oh, lots. So much. It's hard to pick because there have been so many, and for so many years. I've played for kids as they grew up. There are people in their 20s that I knew when they were still in their strollers.

Probably one of the nicest things that's happened to me was meeting Mike, another drummer at Yonge and Dundas. He has been there for 25 years, at least. He's the one who drums on plastic buckets.

What's the most interesting thing you've had dropped in your bowl while busking?

Sushi. And it was really good sushi, too.

Watch Peter jam on the drums below.