Seeing Nine Inch Nails alongside Jane's Addiction in one show (dubbed the NIN/JA tour) was a real treat. For some, it was deja vu, as the two bands last shared the stage during the debut of the Lollapalooza festival back in '91, which was started by Jane's Addiction's Perry Farrell himself.

Some of the fans in attendance Tuesday night at the Molson Amphitheatre weren't even born then, noted Perry Farell, during his band's 90-minute set.

Opening up the show was a pleasant surprise of a band for me: Street Sweeper Social Club, featuring Tom Morello (of Rage Against the Machine) and Boots Riley (of The Coup). The four-piece band graced the stage in matching black and red, chic army blazers and t-shirts, full of energy and enthusiasm. 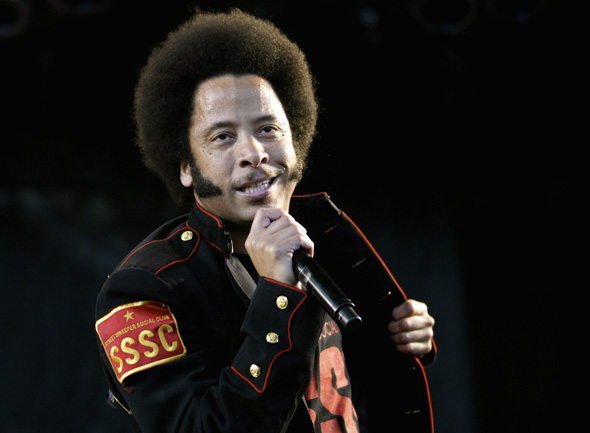 Their third song in was a heavy rockin' cover of "Paper Planes" by M.I.A., which cranked up the crowd's enthusiasm a notch. Riley was really enjoying himself on that huge stage, proclaiming "We're not just a band, we're a social club" in between songs. I look forward to their debut album, scheduled for release June 16. 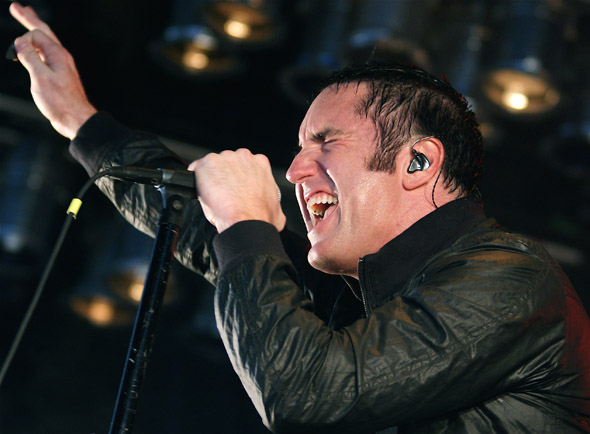 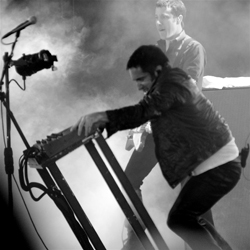 When Nine Inch Nails took the stage, it was still light out and the sense I got from the crowd was that they weren't used to listening to this kinda music in broad daylight.

Second song in, Terrible Lie, off the now 20-year-old Pretty Hate Machine album, helped some of those with goth tendencies to lose their inhibitions and start dancing along.

Trent Reznor was his typical rambunctious self on stage, knocking over instruments as if it wasn't just part of the show but part of the song itself.

With his jet-black hair and sideburns, clad in a light black jacket over a white v-neck t-shirt and tearing into his Gibson Les Paul, he could have been channeling Elvis.

Reznor didn't let up, right through their hour-and-a-half set, including David Bowie's I'm Afraid of Americans (which Nine Inch Nails remixed) and culminating in Head Like A Hole and Hurt. The stage setup was typically stark, with banks of lights overhead and enough power (both visual and aural) to propel their songs with full effect. 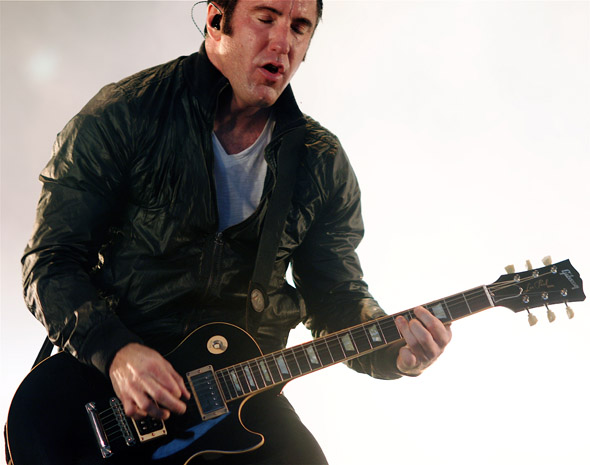 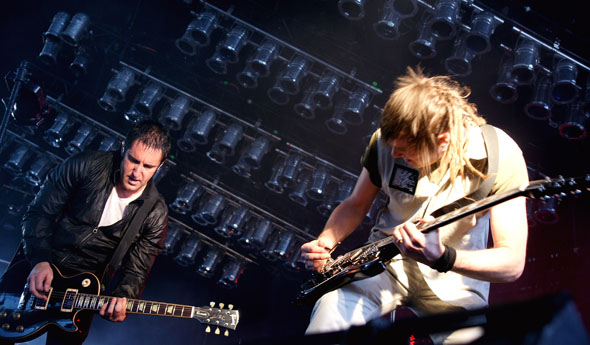 It was dark by the time Jane's Addiction took the stage with a 10-minute-plus version of Three Days. 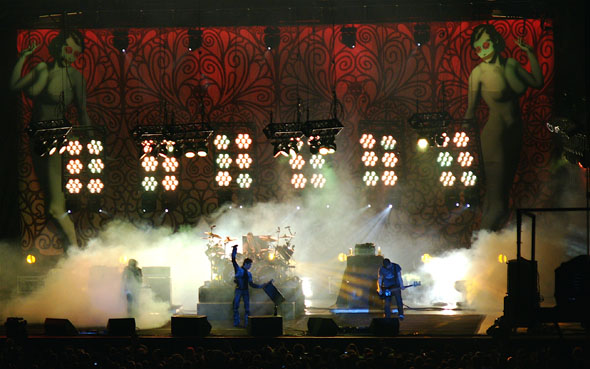 The backdrop was elaborately adorned with a black and red motif, eclipsed by giant figures of a naked woman casting their eyes down on the stage.

Farrell was in full command, prancing about in a fantastic Brechtian/S&M mishmash of an outfit that included a leather corset, black satiny flared pants, a black, frilly scarf and a feathery tail of sorts. How does one accessorize such an outfit? With a pair of leather maracas, of course! 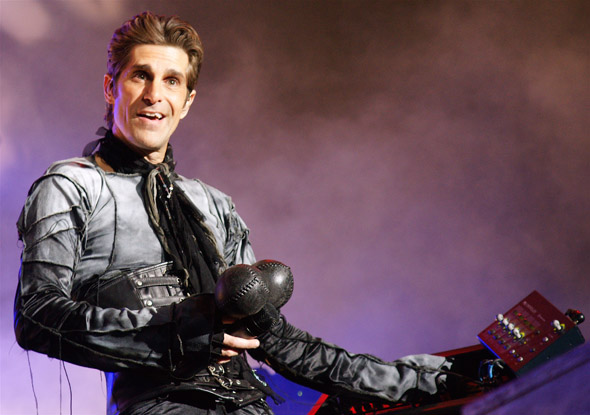 The band, sporting their original lineup, was as tight as ever. With guitarist Dave Navarro and bassist Eric Avery on each side of him, Farrell looked at ease and totally in his element, his constant grin in sharp contrast to Reznor's scowl. It's hard to believe that Farrell is 50 years old now.

Farrell gave many shout outs to Toronto throughout their set. During the encore, he admitted that two days out of 18 years was far too short a time to spend in our fair city. "Should I stop?" he teasingly asked the crowd? "Go... Stop! Go!" before launching into the frenetic Stop. Here's hoping the godfathers of alternative rock music never stop. 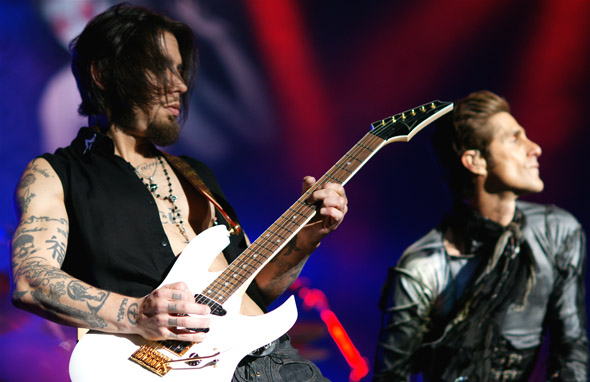 They ended the night with what they described as their favourite song, 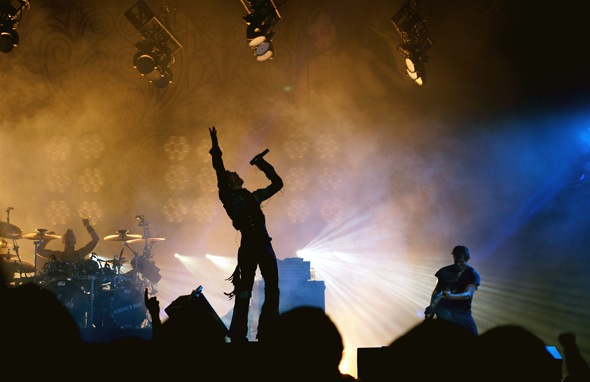 Jane Says, from their debut album Nothing's Shocking. Drummer Stephen Perkins took to a steel drum, Avery picked up an acoustic guitar and Farrell clutched a bottle of vino as he sung a stripped-down version of the tune which had most of the audience singing along.

By the end of the show, a peculiar puddle emerged that took up almost half the area of the floors, leaving huge gaps in front of the stage. It wasn't raining, so it was a mystery where the three-inch-deep puddle came from. Upon closer inspection, it was obvious that the drain had backed up and regurgitated all over the place. 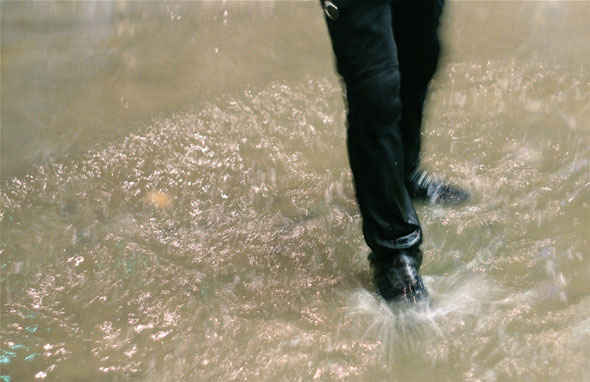 Some took this as an opportunity to splash about while most huddled even closer together up at the front by the stage. It didn't seem to dampen the spirits of the elated crowd after an evening of a stellar show.

More images from the concert in this photo slide show below: