Thursday night didn't promise a very busy night at Rancho Relaxo. I guess you can't really expect a packed event on a weeknight, but that wasn't the only thing causing an absence of a crowd at the venue.

When I heard that Rich Girl were on the bill, I assumed that it would be an electro-punk themed kind of event, but I was mistaken. It was a very random line up of bands; random genres brought together random audience members which made this a very awkward Two Way Monolgues (TWM) showcase for me.

TWM built a lot of hype for this event, saying that it was the last TWM before their hiatus (which lasts until June 6), so maybe that's why I was expecting a crowded Relaxo.

The first band was a memorable one for me. Left to Zero took the stage and began their funky alternative set. They totally reminded me of a late 90s alternative band - a good one though. I remembered Holly McNarland's album "Stuff" when the vocalist sang her heart out. I was a huge fan of that album, so to see a local act bring back a nostalgic feelings for this type of genre was pretty special. Everyone in Rancho, even from way back at the bar paid close attention as Left to Zero presented a set of melodic tunes.

Next up were Kingston's Agpak Mum. When I saw that they had changed into costume sporting painted faces, red sparkled bow ties, and even a chain, I knew that I was in for something interesting. Like so many other artists, these guys decided to cover Rhianna's 'Umbrella'. They altered the song a little... which didn't change the fact that it's already been done. They had some interesting hand percussion, but for the most part, it all seemed like a 'joke' kind of band, which I don't generally enjoy. I didn't enjoy it in the 90s and I don't enjoy it now.

L'affumer were third on the list, and they brought a more up-beat sound forward. I'm not really familiar with the style of music as it is not my favourite genre, but all I know is that they totally pulled off a great set. With Alyssa's powerful and soulful voice leading a grungy sound, and with the reaction of everybody at the front of the stage, I could picture them opening for the Gossip and stealing all of their fans. 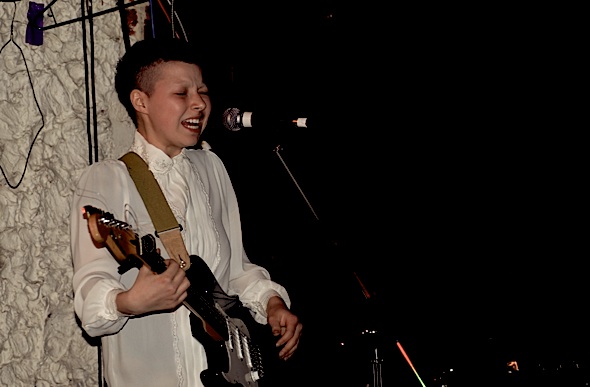 Finally, Toronto's Rich Girl took the stage. They looked and sounded completely different than any of the previous acts. With the absence of their drummer, Rich Girl relied on a drum loop which made them sound way more like an electronic band. I started really listening to the vocals as the front guy screamed into the mic; I knew I recognized that voice from somewhere. It was none other than Serge of 100%Wool. I was a huge fan of that duo, so to see Serge with this new project that blew me away was really exciting. They played a short but sweet set. The biggest issue for me and probably for the band themselves was the sound guy at the board. Rich Girl constantly asked for more computer in the monitor but to no avail. When I looked back and saw that there was no one at the sound board, it was obvious that the sound guy wasn't taking his job very serious. If anything, a band with machines need more audio adjustment.